Monsters University shows how ingrained scaring was to the monster world. Their economy, their entertainment, and their schools all flash awe toward the artistic merit of frightening small children. Monsters Inc. however merely showed us the business equation.

Knowing this, the upheaval caused by Mike & Sully at the end of Monsters Inc. would have thrown their world into total anarchy. Schools would trash curriculum based on scaring. Long held beliefs about energy would be vanquished. Books would need rewritten to consider laughter. Their scientific system would fail as scare theory faltered. Those who fear change would picket to keep scaring.

All because of a little girl named Boo.

Monsters University does not have a Boo to rely on, nothing to hide behind to shield criticism. No one faults a perky, bubbly child for anything.

University plugs into college cinema with its frat and sorority culture. The stuck-up ROR frat collides with the underdog, merely labeled with Roman letters OK. Banished from the pathway of a scaring major, Mike and Sully break from their rivalry to spur misfits into shape and conquer the “Scare Games.” Events test scaring mettle and these oddball (even for monsters) weaklings stand no chance.

Pick where University is going and you would be correct, Pixar’s feature eager to engorge itself on cliché. From design standards to underdog plotting, University could be forced under the surface of its archetypes and it would drown. Considering its audience, this critter crew is leading a generation into their first college movie and a comfortable initial experience with the ideology which drives them. All the while, its messaging of hard work and personal perseverance are direct without being sullied by misplaced decision making.

Pixar slips up by using emotions to propel their film into drama, a routine and muddy excuse to split the Mike/Sully pairing in preparation for third act action. It becomes a search for conflict wherein the film was already built on the concept. University is little else outside of competition, so draining the energy derived from its spirited collegiate atmosphere for personal beefs seems silly. It places University in the spot of countless others storylines, strung up by a discovery, sullen by sadness, then rebounding into success. For its formula elsewhere, this element steps from its boundaries into eye rolling and pace slowing needlessness.

University is a film of rich vibrancy and jubilant energy. To take that away, even for five minutes, begrudges the work done to make Monsters’ world an inviting place. Those elements are a mere snippet of Pixar’s exuberant, smile-inducing style though.

Pixar’s skills are nearing an interesting juxtaposition wherein their worlds are becoming distractingly real to counter the fantasy character design, but maybe here it adds a comforting level of familiarity for the kids. They can relate while soaking up the gags which are the sharpest of Pixar’s output in a few years. 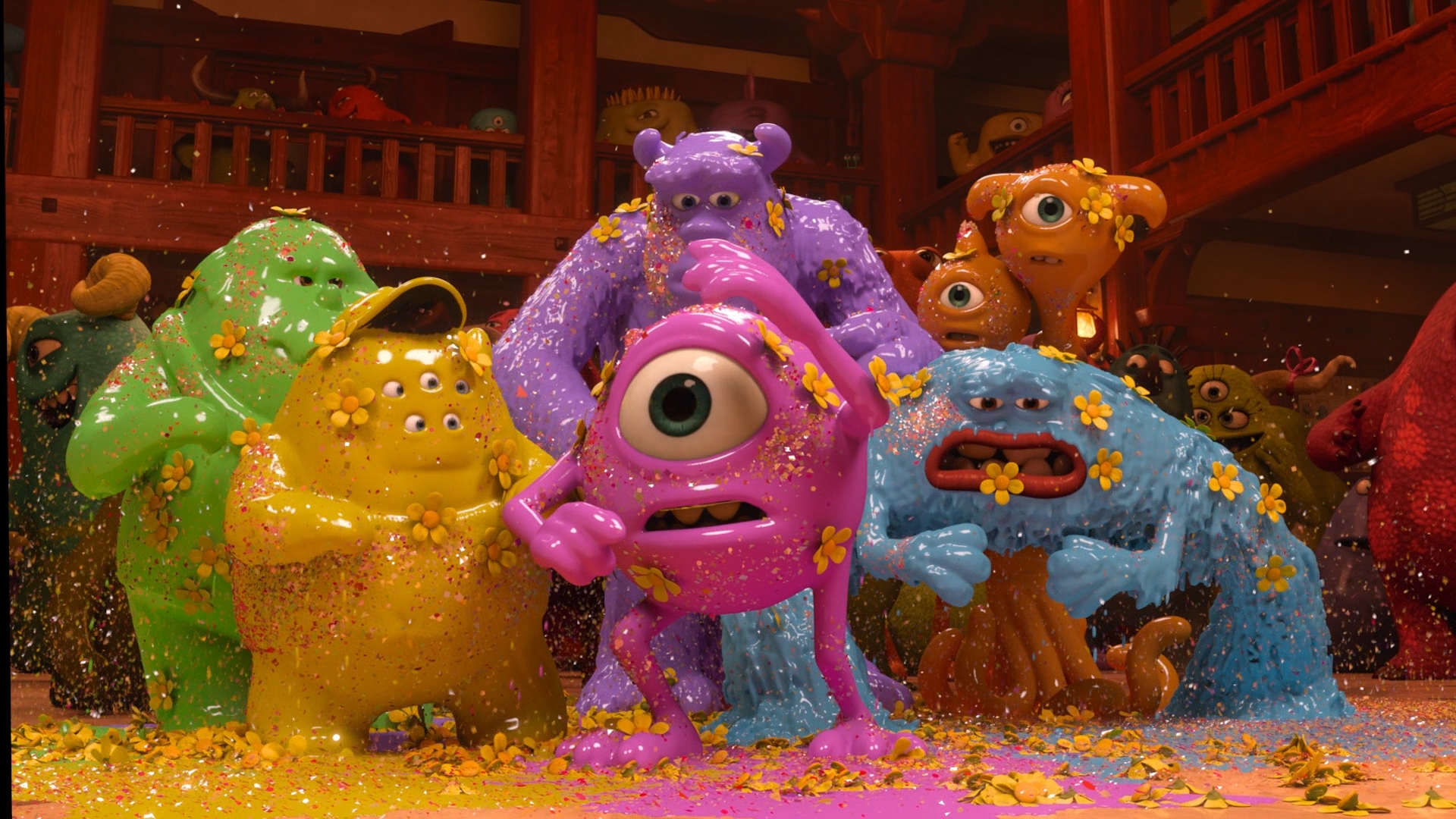 CNN should break into their news broadcasts immediately with an alert: A Disney/Pixar Blu-ray has reached visual perfection status. It’s shocking news to the world… much like every other disc produced through this animated pairing. So, in retrospect, maybe it isn’t so shocking.

Comparatively, Monsters Inc. appears puny when set alongside Monsters University. Changing standards, computing power, and texture rendering make the original appear as a TV spin-off, assuming it were released in the modern day. University’s bevy of astonishing images from the campus, fall trees, and fur (so much fur) are absolute. Nothing on this disc can be turned negative with lines of resolution seemingly covered with more resolution.

Plump colors and an adherence to rich contrast keep University moving visually. Until the third act downer comes to pinch these elements (and even then the disc becomes a showcase of black levels), there are no scenes nearing an inadequate level of anything. Design splurges in an assault of primary tones while virtual sunlight reigns down to amp up image intensity.

Monsters Inc. appeared on Blu-ray with a slim aliasing problem concerning Sully’s fur, corrected here whether in 2D or 3D. Refinement delivers additional levels of striking clarity with fidelity peaked to compete with 2012’s animated master, Madagascar 3. With hints of realism in stone work, plants, and lighting, University comes to life with literal implications. In the dark, Sully looks astonishingly realistic and could pass such a test were he not a purple and blue, horned monster. In other words, even at its visual low as its characters work through a forest with only moonlight pouring down, the disc loses none of its punch.

The 3D disc carries a menu screen with the depth and layering expected of Disney/Pixar animation. It’s the campus of Monster U, and when this same angle is used in the main feature, it proves just as powerful. Hallways and the Scarefloor of Monsters Inc. stretch into the farthest edges of the screen, creating plausible space for these characters to inhabit. Backgrounds work with trees and other objects in consideration of the stereoscopic version.

Monsters University has few exploitative pop-out moments, yet renders each element with brilliant accuracy. Mike’s rotundness is genuine, while Sully’s fur has visible depth between hairs. Randy’s first appearance shows him with glasses which accentuate his bulging eyes. They stretch from his face in a believable manner.

The only lapse is the escape sequence at night, where images become darkened to intentional extremes. Add in the complication of dimming glasses, and there becomes a severe shortage of dimensionality to appreciate. These scenes fall into the realm of lackluster and even dangerously close to providing no 3D effects at all in certain shots. To the rescue are flashlights poking around and their light beams can add some punch while lightening the screen to proper levels. Despite these concerns, Monsters University deserves its 3D space.

A theatrical recipient of Dolby Atmos, the downgrade to TrueHD 7.1 has been ultimately kind. Booming with aggressive band music from its opening credits and reveling in the LFE splendor of a Godzilla-sized creature during Mike’s first steps on campus, Monsters University is adorned with sonic spectacle.

Scenes are implicit in their need for audio accompaniment. A tipped scream canister begins a jet propelled trek across the classroom at 26:44, rushing air and child screams pinging off the corners of the room. Crowds taking in the events of the Scare Games are vibrant with cheers and jeers situated in specific channels. Party music moves from amplified to dulled if the shot takes place inside or out with stunning realism. LFE pushes into overdrive during a late scare energy spike, leading into a hearty explosion.

Design work is impeccable. Decisions are smart and small volume spikes are used to bolster monster roars. Subtle campus ambiance lessens boredom, while a key moment inside of the library is flushed with creaking floors critical to the story. They amplify and broaden the danger. Peerless work.

Pixar’s stunning short Blue Umbrella is available in 3D with the proper disc, and it ranks amongst their best. From here, it becomes an overload on two discs with commentary work from director/co-writer Dan Scanlon, producer Kori Rae story supervisor Kelsey Mann. Blue Umbrella is duplicated here as well for non-3D viewers.

Disc 2 (or three if you are the owner of the 3D set) jumps at the chance to detail production. Campus Life follows the animation team and their routines during the film’s creation for a total around 15 minutes. Story School crafts a picture of the creative process, from writing to storyboarding.

Scare Games details the messaging from the film as found in Pixar’s own methods. Monthroplogy dives into the world of monster design – and there are a ton in this feature. Welcome to MU focuses similarly to the latter, only on the school itself. Music Appreciation details the score, followed by Scare Tactics which delves into facial animation when depicting scares.

Color and Light shows the process of filling in animated intangibles, with comparisons. Paths to Pixar brings forward some of the crew to detail how they wound up working for the studio. Furry Monsters displays the incredible variance in animated fur between the first film and this prequel. Four deleted scenes are introduced by the directors, and set fly throughs take a virtual tour of key locations. Trailers and art galleries complete this bulk of bonuses. In total, there are roughly 90-minutes of features on display.