MGM’s grandiose production design created a fairy tale playland to insert and marvel at Judy Garland’s screen presence. Fitted with Technicolor saturation and an organic surrealism, Oz is often lumped together with batches of Hollywood classics, but breaks free from routine categorization. Oz is unanimously loved, studied, and embedded into our thinking. Few other films can master that feat.

This is a humbled film, imperfect yet perfect. Its mistakes and its flubs – in addition to its stage like presentation – is a rarefied example of raw charm. So much of Wizard of Oz is excitedly animated, from Ray Bolger’s infectious wobbly Scarecrow to an unsteady Jack Haley as a rusted Tin Man or Bert Lahr’s pouncing (and cowardly) roars. Set-ups are active from foreground to back, and its vivid use of décor remains utterly unnatural in a way which delivers the wonder of this creative endeavor.

Oz may stand alone in its styling, and it seems obvious how rampantly misunderstood its appeal is. Studios would dip into its financially rich well for Disney’s darkly unsettling Return to Oz, discharging the everlasting happiness contained in the ’39 feature for blanketed horror. Oz stopped being a place to revisit, but rather a world to fear and detest.

Disney tried again in 2013 with Oz: The Great and Powerful (Blu-ray review), a friendly space but overdosed on computer generated scenery as to make it more artificial than plants in Munchkin Land. Then of course there’s The Wiz and TV mini-series Tin Man, none of which appreciate how sanguine MGM’s production was, or the effectiveness of its long term relevancy. Remakes, sequels, and spin-offs are made under the perception of then and now, little more than marketable fodder for current audiences. They slip into over thinking appeal and thus miss the effortless energy which drives Wizard of Oz.

It’s not complicated either, which makes those invigorated fumbles such disappointments. Oz skips and hops with a genuine effervescence, igniting into songs so catchy as to infect our childhoods and shower adulthood with shared nostalgia. It’s an inviting performance piece where actors bend and contort to craft character from mannerisms or movement. It’s where make-up and suit work avoid dominating realism and settle into a nook of comfortable playfulness. It’s where stars such as Judy Garland can lead from ingrained talent while surrounded by eye catching sets and kaleidoscopic costumes.

On second thought, maybe it is complicated. Modern filmmakers leave their complexities to digital tools instead of their ingrained imaginations in pursuit of misguided reality. This medium is film, which can be anything visually, and yet we continually reach to replicate grounded realities and fear straying from our own existence. Oz is a dream, and it is a travesty we seem fearful to do so anymore. 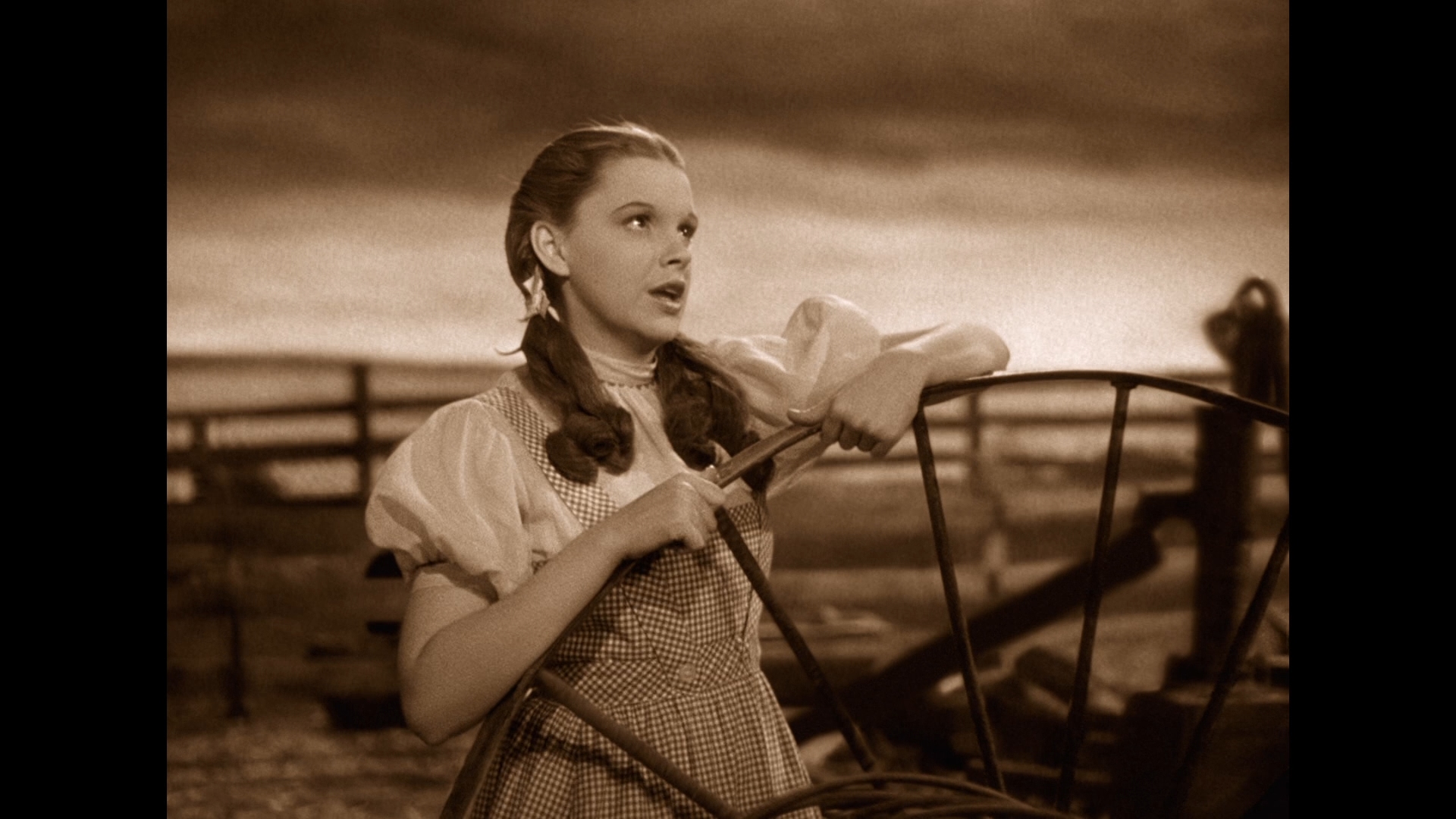 Warner released a stunning Blu-ray for Wizard of Oz in 2009, encoded in VC-1 and lavishly restored in 8K. Since then, things have not changed. The 2D version included in this set remains encoded with VC-1, and while perfectly capable, is identical when switching between the two. To reiterate: Despite the outdated codec, Oz is a beauty, and DoBlu’s 70th Anniversary review would not change were it updated under evolving conditions.

That puts eyes on the 3D, ballyhooed by Warner with years spent doing conversion work for theatrical and home release. This disc comes from the ridiculously high 8K scan (dribbled down to 1080p of course) and it remains a showcase at the peak of our current generational limits. Any gained fidelity is almost invisible from previous releases, although Warner has performed some patch work. A handful of specks and spots have been eliminated, as if they were ever a bother before. Wizard of Oz was near pristine and officially reaches for perfection with this latest touch up.

Details remain and gloriously so. Make-up definition is superb, particularly the shimmering silver Jack Haley dons as Tin Man. The rusted look often bled together on previous formats, now made so clear as to be unmistakably formulated. Corn stalks in Scarecrow’s field define deep into the distance and showcase their homemade appearance. Costume felt is a marvel, and bricks as Dorothy makes her journey down the famed Yellow Brick road are resolved individually.

Encoding purifies grain naturally without signs of tinkering with the inherent nature of film. Sepia toned book ends prove stout in their grain reproduction and superior in gradient scale. In Technicolor, bountiful hues – carefully selected to maximize primaries or all in between – blossom as to make misguided “grain haters” ignore the light layer created by the film stock. Black levels prove their worth as the film moves into the Wicked Witch lair, including a spooky forest overwhelmed by darkness. It remains superlative.

As for 3D, Wizard of Oz is converted not for gusto, but rather enhancement. Out of everything it does, taking obvious matte painting backdrops and pushing them outward to extend their depth is the most beneficial. As Dorothy approaches the edge of Munchkin land prior to meeting Scarecrow, she is walking into a flat wall, only now, Yellow Brick Road breaks from a flat plane into something purposeful to narrative. There is an argument sizzling and awaiting eruption surrounding intent regarding how this changes or warps design. That’s a piece for another time.

Impressive work is scattered about, from the corn field of Scarecrow and well aligned stalks or a dazzling display of poppy flowers. A snow effect and Glinda’s bubbled appearances push forward too. The rounded style of the Wicked Witch of the West’s castle are better pronounced from their matte origins, and depth is given to broomsticks or wands as they stick from the frame.

However, there are ultimately a number of wholly flat moments. Inside the twister which takes her to Oz, Dorothy’s exterior window feels connected to the wood framework without establishment of depth. The same goes for the Witch as she sends out her flying monkey horde. Close-ups are reserved and fail to lock in the full, pronounced depth. Some will point at the age gap, but it’s irrelevant in the face of modern technology. Current 3D conversion tech could take a silent Buster Keaton film into another dimension as much as it could the latest Star Trek. This is more a case of holding back as to not extinguish iconic visuals with overlapping touch. Oz 3D is subtle and reserved, a different way of seeing things without impinging on the film we all love.

Now mastered in DTS-HD as opposed to TrueHD, differences are… nowhere to be found. Any additional information pulled from the source will be evident to the extreme audiophile spectrum. As it sits, Wizard of Oz can sound incredibly modern in terms of clarity, from its opening orchestration to fluid lyrics. Vocals are pure without a tinge of age or hiss to draw them away. Richness in Garland’s voice is preserved without fault, making “Over the Rainbow” sound as sparkling as its ever been on home video, here and in 2009.

Oz is the recipient of a 5.1 job, minuscule in scope and mostly a distraction. While the low end effects of the tornado, the tumbling house, and Oz’s fire show are welcome, surround effects are anemic. Oz’s amplified voice sweeps into the rears and flying monkeys barely reach surround channels. Songs have minimal lift aside from a stretch to the stereos. Little attention is paid to spacing, and while the compressed mono mix lacks the same fullness, it does avoid sputtering out from intent. Much like the 3D, the expanded audio is reserved and unfulfilled. However, it’s too sharp and pure to let a handful of artificial touches pull it down.

This is not the bounty of extras found in the prior Oz Blu-ray, and in comparison is absolutely anemic. You will need to keep both editions for everything.

Judy Garland/Oz historian John Frick leads a recycled commentary, bumped up with vintage interviews from the cast. From the Munchkins to lead actors, everyone has their say, and Frick is remarkable with his knowledge. On the 3D disc, you are given a chance to enjoy a music/effects track, and catch seven different trailers.

The 2D disc holds the majority of bonuses beginning with a making of, stretching past the hour mark. This is a wonderful, modern, and new documentary for those unfamiliar with the production’s story. From here, it’s the same. Angela Lansbury reads Baum’s original story, nine actor profiles look into the lives of the film’s stars, three radio promos are preserved, a sing-a-long/jukebox are offered in tandem, with stills find themselves trailing at the end. This is excellent material if this is your first Oz run on Blu-ray, not so much otherwise.

Note: Screens are taken from the 3D disc in this set.