The Heat must’ve taken a small century to shoot. Over saturation of ad libbing turns this feminine buddy cop flick into a piecemeal comedy, where it would seem the often regretful story arc is secondary. Sandra Bullock and Melissa McCarthy rough it up in patched together scenes with the thinnest of purpose, often egregiously unnecessary, if considered too hysterical to lose.

Sandra Bullock opens as FBI agent Ashburn, high on ego, low on personality. Her effortless seizure of drugs and weapons lines her up for internal promotion if – conveniently for narrative – she can pin down a Chicago drug lord. Unfortunately, those streets are not being ruptured by the influx of cocaine, but rather the brutish methods of Detective Shannon Mullins (McCarthy). Somehow reaching the rank of Detective, Mullins punches, throws watermelons, abuses superiors, and drops flagrant F-bombs… because comedy.

Pinned together in this investigation with hard headed DEA agents close behind, Mullins and Ashburn rough up low level dealers while consistently finding themselves at odds… because buddy movies. The Heat exhibits zero shyness for its explicit lift and tuck of buddy cop flicks, and exists for that sole purpose. As with director Paul Feig’s Hangover clone, Bridesmaids, The Heat is pulling in a gender swap for much of its amplified laughs.

Whether it works depends on personal tolerance for Ashburn’s prissy stuffiness, Mullins’ degrading methodology, or the combination of both in tandem. Heat overworks its two stars into comedic submission, catering to the duo’s rush of obvious character development even if scenes fall to the wayside in purpose. Dead center in the piece is a bar rush, leading to drunken dancing and highlights of no specific consequence or purpose. That’s ultimately Heat’s downfall, an excuse for splashed on star power without material to harness their talents.

Both McCarthy and Bullock are wonderful, even if McCarthy is finding herself tagged along into typecasting. Bullock squeezes from the cramped drama spaces of Blind Side and mercifully moves away from cinematic comedy disaster All About Steve to show off timing in this seemingly uneven pairing. McCarthy is capable of bulldozing scenery with her loud and politically incorrect ritual, but Bullock’s stand tall character is appealing as she goes through a process of loosening up, despite the rampant predictability evident in the arc.

Heat plods along with instances of laughs peppered throughout, leaning heavily on R-rated abrasiveness. Almost every laugh comes propelled by McCarthy mischief or a language bomb, lifted on the shoulders of Ashburn’s grounded, polite indifference. This is hardly a substantial reality, but places itself just off center from the mind of MADtv/Parks & Recreation writer Katie Dippold. It’s enough so Mullins’ Tic-Tac throwing mayhem seems reasonable in The Heat’s framework, while Ashburn sort of lives in it. 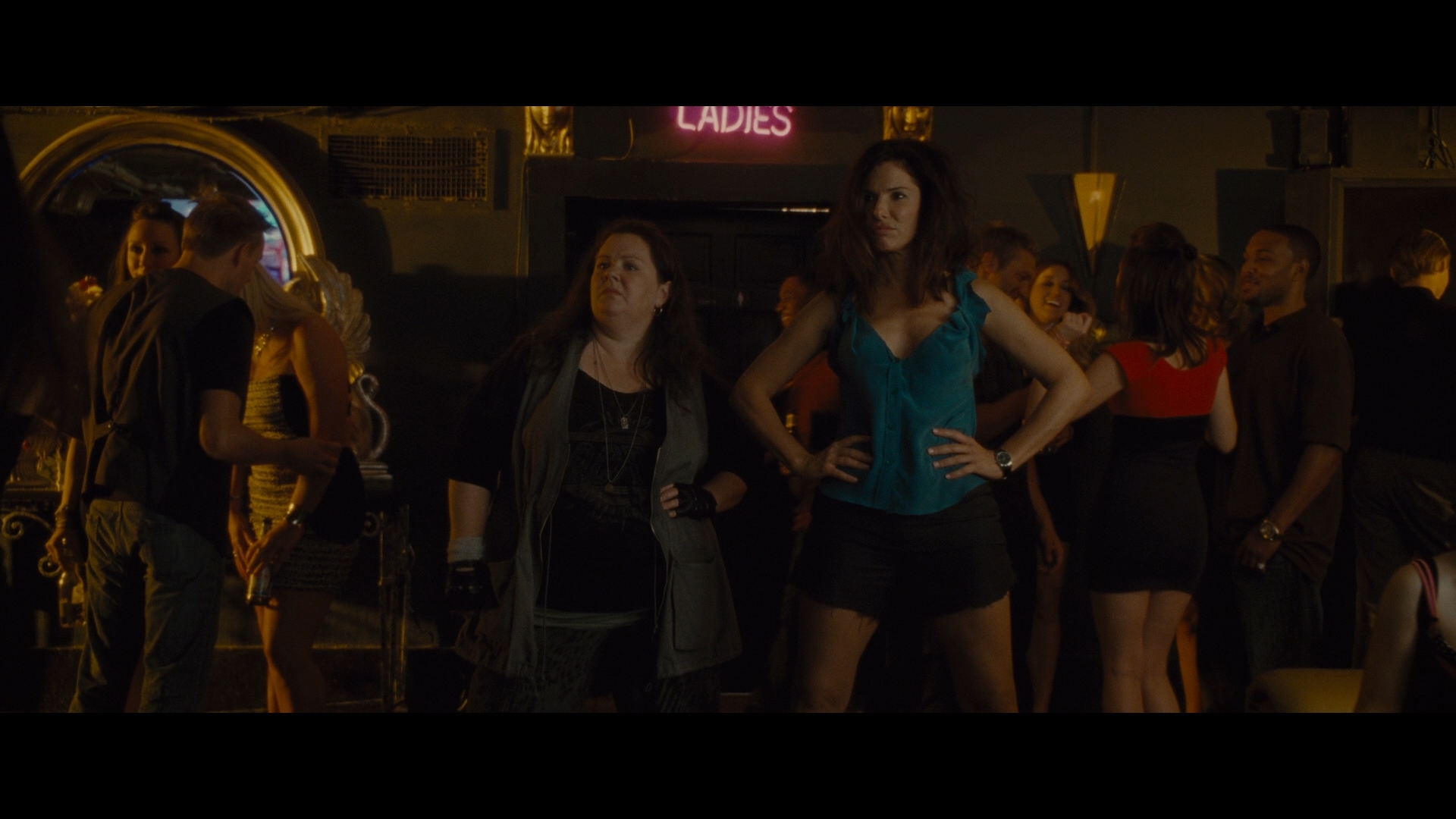 Two things remove The Heat from visual contention. First is a dramatic shift in warmth which saps any contrast power from the frame. Full white is never achieved, and it would seem Heat was dimmed into unimpressive depth by color timing decisions. While flesh tones are untouched from expected splashes of orange, things such as cloudy skies or interior offices come across poorly lit.

Secondly, and arguably more importantly, is the lack of visible film on this film-based source. While tiny legions of grain can whip onto the frame (and Fox’s AVC encode is more than willing to handle said source), images are often devoid of fidelity, dodging fine detail through subtle filtering, likely source side. In Blind Side, Bullock was thickly filtered digitally, and it would seem similar methods are employed here, although not only for Bullock. Faces carry a plastic appearance in medium shots, and close-ups range from fair to disappointing. Cinematography is not inherently conducive to sharp, dazzling images, and even still these prove low on a scale of impressiveness.

Manipulation goes further with instances of ringing, unsightly within this unmistakably over processed feature. Contrasting edges are unclean, leaving slim halos and rough transitions. Someone seems to have bumped a sharpening filter after they fell over on the noise reduction. Note this all seems applied selectively (if dominant), as The Heat has a number of great exteriors and minor displays of facial fidelity.

Heat will scrounge together black levels, crucial considering the number of night sequences, outside or in bars/clubs. Whatever depth is lost to the pitiful contrast is attempted to be salvaged by deep, natural blacks with presence of mind to keep an eye on shadow details. If video quality can proudly display any positives, it sneaks in under a cover of darkness.

Playing around with dialog separation in the stereos, dishing out vibrant music, and handling a few explosions asks a bit from this DTS-HD mix. Audio design is rather forgettable, but so is the sonic material it presents.

Breaks from the mundane are often shocks to the system, specifically a club sequence which pours out at full volume at 40:16 and a blast at 1:19:04. They break from standard conversation, and rush the LFE for some power audio. Oddly, another detonation around 20-minutes after the first is absolutely anemic. It’s as if the subwoofer no longer exists in comparison.

Director Paul Feig is everywhere in these extras (including a 30 second intro and outro), which amount to a slew of alternate takes or adlibs. Seven different sections, well over an hour in total, find snippets of dropped footage or additional gags to showcase. Although they all carry different names (Acting Master Class, Police Brutality, etc.), they’re the same idea with different scenes/actors involved.

Actual deleted/extended/alternate scenes are included in Stuff We Had to Take Out but Still Think is Funny. There is a ton invested in these too. In what might be a record, The Heat includes five (!) commentary tracks, although all is not what it seems. Feig goes solo for the first, joins Melissa McCarthy (and crew) for the second, brings in-character Mullins’ for the third, lets the original Mystery Science Theater crew take over number four, and the fifth is quite unique. There, listeners are treated to audio from the premiere screening, a live audience laugh track if you will. It’s an overload of content, certainly at times creative, but the abundance of flubs is almost too repetitive to bear.