John Carpenter was an up-and-coming director in 1978 when he unleashed Halloween, a genre-defining movie whose immediate success ushered in a thousand imitators and a legendary horror franchise. Originally made as a low-budget, independent film, Halloween introduced one of the most memorable characters to ever appear on the silver screen. Almost every moviegoer over a certain age knows Michael Myers and his iconic mask, blank like Myers’ dark soul. This is where his legend begins, in the quiet Illinois suburb of Haddonfield.

While Halloween may not have been the first slasher film, its crafted style and originality elevated those brewing themes into something new and more potent, frightening audiences everywhere. True fans will know Michael Myers as ‘The Shape,’ a blank cypher onto whom audiences can project their own fears onto as he stalks Laurie Strode (Jamie Lee Curtis) and her randy friends. Carpenter’s first-person perspective for Michael Myers as he watches future victims is chilling to watch, even to the jaded moviegoers of today.

Before supernatural elements were added to the franchise in later sequels, Halloween’s essence was purely about a psychotic, unthinking maniac set loose in a neighborhood that could be Anytown, USA. One of Carpenter’s true strokes of genius was making the town’s setting so perfectly normal. This is a typical suburban neighborhood with schools around the corner and two-car garages in every house. The setting completely lacked the typical accoutrements of spooky locations. The town’s cops are mostly concerned with the antics of high school kids. An insane killer is so far beyond their scope it goes over their heads.

The audience is kept largely in the dark about Michael’s motivations from the beginning. Dr. Loomis (Donald Pleasence) gets all the best lines as he describes Michael as “pure evil.” Dr. Loomis is an overlooked and critical part of Halloween. The only person with insight into Michael Myers’ mind, Dr. Loomis frames the killer’s story with just enough background information, without bogging down the narrative with too many details.

Interestingly enough, the longer television cut found as deleted material on this set go into more depth about Michael’s childhood and psychosis. It is interesting to watch but Carpenter made the correct decision in leaving it out of the final cut. The audience only wants to know so much background about the inhumane killer. The air of mystery works better for Myers, as it shifts the focus to the character of Laurie and her struggle to survive this force of nature.

It would be amiss in any review of Halloween to go without mentioning Carpenter’s famous theme and score, one of the most recognizable pieces of cinematic music in history. The moody, haunting theme with its complex piano melody is a huge part of what makes Halloween so memorable to this day. Integrated exactly when it is needed, the theme instantly gets the blood racing. Its presence signals that Michael is on the prowl, perfectly prepping the audience for the next kill.

Few films ever have had the lasting impact of Halloween. It defined and shaped a genre for nearly two decades before its formula started to bore audiences through sheer repetition. A true original when it first came out, Halloween has stood the test of time and still remains a classic today. 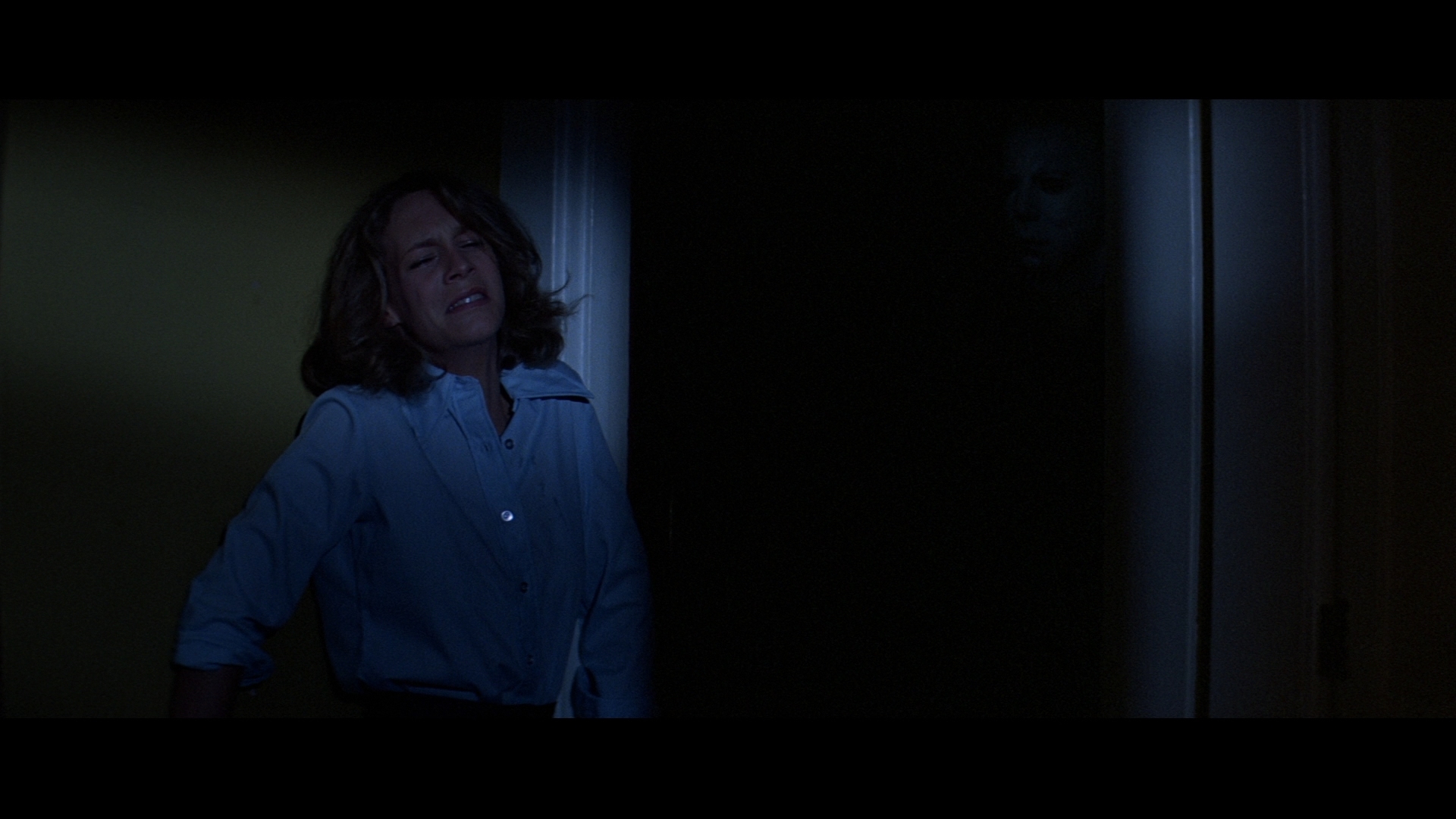 The 35th Anniversary edition’s most significant new feature is its all-new high-definition transfer, supervised and approved by Halloween’s original cinematographer, Dean Cundey. This is not the first go-around for Halloween on Blu-ray, as it was first released in a heavily-criticized edition back in 2007. Much was made of that earlier Blu-ray’s color timing, which deviated significantly from Halloween’s theatrical color and the earlier 1999 timing personally overseen by Cundey. The people handling this new transfer have struck a completely new scan from the camera negative and then given it yet another color correction.

While set in Illinois during the Fall, Halloween was actually filmed in Southern California. This new transfer corrects the erroneous color changes made to the 2007 release, though some will argue it still remains too vibrant for the violent, dark film. That particular criticism is wildly overstated, though the healthy green grass of California does clue the viewer in as to Halloween’s actual shooting location, which is certainly not the autumnal setting of the Mid-West. This new color grading strike the right balance in terms of contrast and moodiness. Black levels are superb and its shadow delineation is gorgeous, rendering dark scenes with palpable texture and detail.

This is truly one of the great film transfers on the Blu-ray format, produced with the utmost care and love. The high-quality scan replicates the Panavision-shot 35mm film with incredible precision. It is a reference-caliber, film-like transfer of devastating quality. It goes without saying this is now the definitive version of Halloween. There have been no attempts to add undue manipulation or processing, resulting in a filmic image without a trace of filtering or halos. The camera negative is in incredible shape, nearly pristine and fresh-looking as it looked upon release.

Anchor Bay has treated the video encode very carefully, taking no chances that compression artifacts might intrude into the 2.35:1 framing of Halloween. The AVC video encode average 36.20 Mbps for the main feature, nearly as high as the format’s specs will allow. Halloween runs almost 91 minutes on a BD-50. It flawlessly handles the shadowy textures as Michael Myers creeps in the darkness and easily replicates Halloween’s original grain structure.

Halloween was a cheaply-made, independent movie. Carpenter candidly admits in his commentary on some of the limitations they dealt with in filming, including focal problems in certain shots due to the Panavision lenses. On its own terms, Halloween looks fairly good for a dark horror film from 1978. The talented crew working on Halloween gave it the look of a much more expensive production.

Having given Halloween the royal treatment for its new video transfer, Anchor Bay took the original mono soundtrack and also remastered it, mixing it into a spacious, powerful 7.1 Dolby TrueHD mix. The results are stunning, a critical upgrade for a movie so dependent on its score. Carpenter’s iconic score and theme has never sounded better, expanded across the entire soundstage with a heavy bass presence. Sound cues have been arranged for maximum directionality. A number of subtle ambient sounds envelop the listener, from the rustling of leaves to eerie noises. Improvements heard in clarity and overall atmosphere are outstanding in this new surround mix. Some minor problems remain due to the film’s age and original recording, but they barely merit a mention.

Purists will likely want to hear the original mono soundtrack, presented here in 2.0 Dolby Digital at 192 kbps. There are some complaints this is not exactly the original mono soundtrack due to some new sound effects, but I am not well versed enough in Halloween’s audio to give a more definitive conclusion. The mono sound is tinnier and lacks the presence of its newer surround brother. I think most will prefer the state-of-the-art 7.1 mix for its enhanced sonic presentation.

Subtitles for English SDH and Spanish have been included by Anchor Bay.

Anchor Bay has added two completely new special features in this anniversary edition, retaining a smattering of older features from prior releases. The most important new feature is an audio commentary by Carpenter and Jamie Lee Curtis. This set is packaged in a deluxe digibook format in which the disc itself is held in a paper sleeve. It’s a slick package with an embossed cover. Twelve pages of liner notes and photos are included by historian Stef Hutchinson.

Audio Commentary with Writer/Director John Carpenter and Actor Jamie Lee Curtis – This is a lively, friendly discussion between two old friends. There is a lot more technical information presented by the both of them than I expected, as they delve into in-depth, behind-the-scenes information.

On Location: 25 Years Later (10:25 in 480i) – A look at the Californian neighborhood where Halloween was shot and some background on shooting the film.

TV Version Footage (10:46 in upscaled HD) – Mainly featuring Dr. Loomis, this extra footage is necessary to watch but only after one has seen the entire film. It covers Loomis and his early supervision of a young Myers.