Smart, unsettling thrillers are such a rarity in today’s movie culture. Most stretch their shallow premise beyond the breaking point, usually ending up in ridiculous twists. The East is an exception to that trend, featuring a heavyweight ensemble cast in a clever story of changing alliances and surprises. Ridley Scott is attached to The East as producer, but the film is actually the baby of director Zal Batmanglij and co-writer/producer/lead actress Brit Marling. The East is a heady blend of various elements from both Fight Club and Donnie Brasco.

Sarah Moss (Marling) is fresh out of the FBI, hired by a private intelligence firm to work as an undercover agent and infiltrate a new breed of terrorist group. Calling itself “The East,” this terrorist cell is a small group of disaffected American youth on the fringes of society. The cult-like terrorist cell is into anarchy with a purpose, terrorizing corporations the group deems responsible for the evils perpetuated by those companies. The closest model for their behavior are obviously real-world examples of Eco-terrorism.

The first target for the East happens to be the corporate leadership of a pharmaceutical firm, producer of a billion-dollar drug with crippling side effects. Working undercover, Sarah eventually ingratiates herself into the group. She spies on their activities for her corporate bosses. The East is a motley assortment of characters, all seemingly disenfranchised from life for different reasons. Benji (Alexander Skarsgård) and Izzy (Ellen Page) are the de facto leaders, complex personalities living entirely off the grid as proof of their ideology. The base of operations for the East is a burnt-out shell of a house, deep in the woods away from civilization. It might as well be a hippie commune, as the members live with few electric appliances beyond their viral presence on the Internet.

As Sarah begins to participate in these terrorist activities against the corporations and their executives, she begins to sympathize with the East’s beliefs even as she disagrees with their confrontational and harmful methods. Her boss in intelligence, played by Patricia Clarkson, warns Sarah about getting too close to the situation. After living for months with the members of the East, she starts feeling adrift from her normal life outside the group, including her husband Tim (Jason Ritter).

Sarah starts to buy into the East’s strange philosophies and odd habits, including group bathing in a lake. She continues to report on the group to her boss but does it with some hesitation. Sarah gets closer and closer to Benji, the mysterious leader of the group. Her boss wants to know the next planned attack in advance, hoping to cash-in on the information. It is a moral dilemma for Sarah as she increasingly agrees with the East’s radical agenda.

The East has a finely crafted script, directed with style by Zal Batmanglij. When you expect certain events to go one way, it subverts your expectations with logical but unpredictable twists. What holds it together are the intense performances by Alexander Skarsgård and Ellen Page. Conspiracy thrillers in this mold often lack proper emotional context. Their characters provide the shifting moral quicksand in which Sarah gets caught, ultimately deciding her fate. Most thrillers have hollow emotional cores, as the plot supersedes all character development. The East is that rare movie which forms a more intimate emotional connection with its characters. 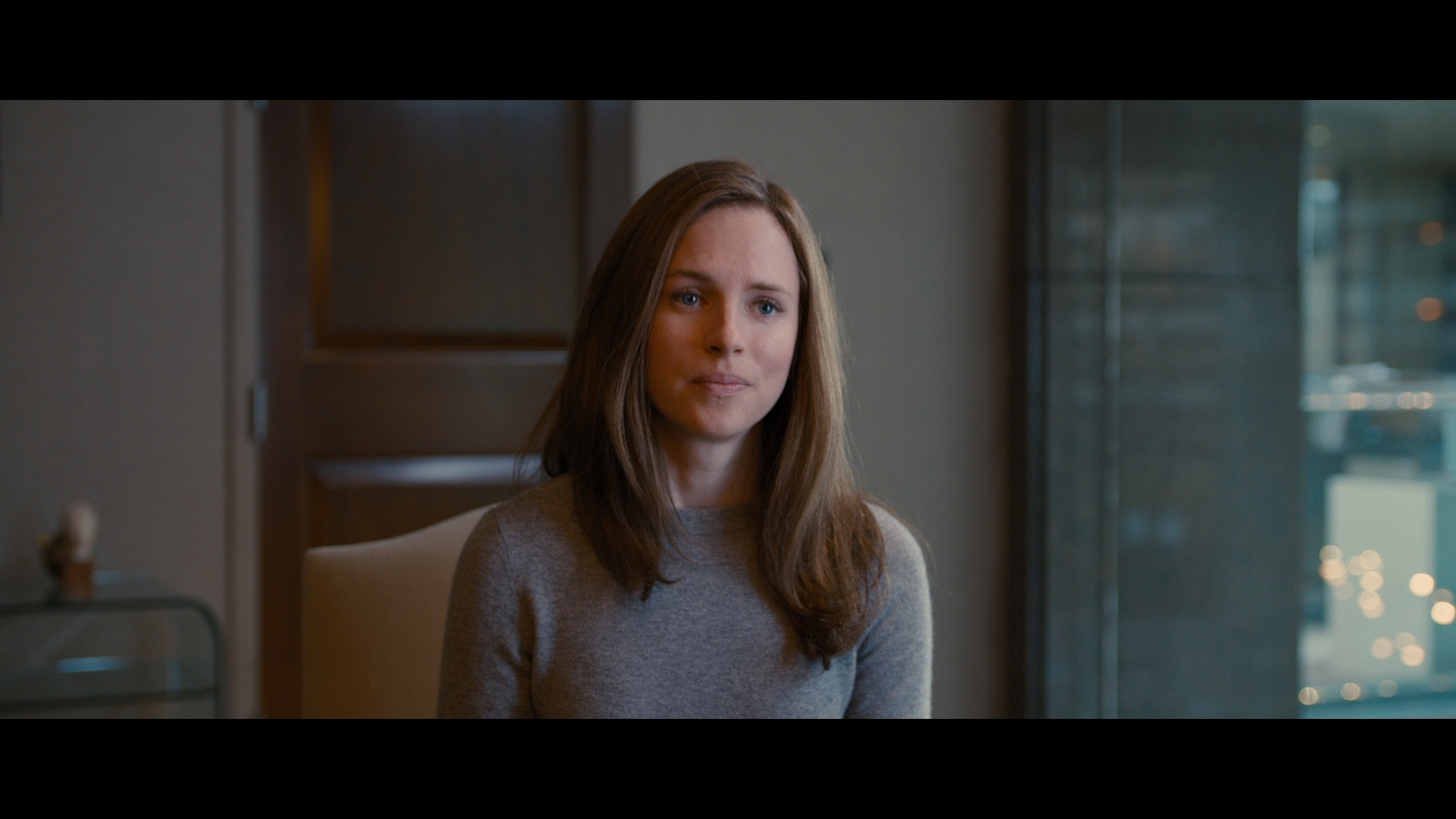 Moody cinematography by Roman Vasyanov looks excellent in The East, adding the right tone to its atmosphere. Shot on the increasingly common Arri Alexa camera, Twentieth Century Fox has given the film a perfect AVC video encode on a BD-50. Presented in an eye-pleasing 2.35:1 aspect ratio, the 1080P video falls short of being pure demo material due to minor problems with shadow texture and black levels.

The picture quality is consistently sharp. High-frequency detail wavers at times, mostly due to the minimal amount of electrical lighting in the East’s base of operations. Daytime exteriors exude excellent clarity and contrast. Some darker scenes have slight problems with the crushing of black levels, leading to a reduction in shadow detail and delineation. A hint of aliasing creeps into a handful of shots, likely a scaling artifact from the 2K Digital Intermediate.

The East operates in a subdued color palette, rich in amber and browns. Brighter primary colors disappear inside the group’s compound, as it is lit mostly by homemade candles and seems perpetually stuck under an overcast sky. The cinematography does not lend itself to outrageous depth or pop.

Fox’s video encode handles the largely pristine video with ease, averaging 35 Mbps for the main feature. This is how compression should be handled on all Blu-rays, entirely free of artifacts from the reference-quality video encode. The print is immaculately clean, ranging from the brightest exteriors to the darker sections.

The East has a 5.1 DTS-HD MA soundtrack that seems quiet at first, but in actuality is bustling with a murmur of well-designed sounds. The mix is fairly engaging and uses the entire soundfield, placing ambient noises in a logical manner. The East does have some intense moments, but at its heart is driven by intelligent dialogue. The one problem with this mix is its wide dynamic range. Dialogue ends up being very soft in relation to the score and other musical support, which might lead some to ride the volume if they listen at reference levels.

Several other alternative soundtracks have been provided. They are a 5.1 English Descriptive Audio in DD, a 5.1 Spanish DD, and a 5.1 French DTS. The optional subtitles are English SDH, Spanish, and French. They all display inside the 2.35:1 frame of the movie, in a white font.

Fox has included a smattering of special features, though they are all short and underwhelming. The short featurettes heavily rely on star Brit Marling and director Zal Batmanglij for answers. An audio commentary would have been a nice addition. A UV digital copy is included, redeemable on VUDU or Flixster. A series of skippable BD-Live trailers play before the main menu.

Deleted Scenes (04:46 in HD) – One of the included deleted scenes claims to be an alternative ending, though it is so vague I don’t consider it much of anything but extra footage.