Skillfully written and superbly acted, Showtime’s Homeland has been a critical darling since it first premiered. It won several Emmy Awards for its first season, including the 2012 prize for Outstanding Drama Series. The second season picks up right where the first season left former CIA agent Carrie Mathison (Claire Danes) and Congressman Nicholas Brody (Damian Lewis). Expect a thrilling, suspenseful ride once again, as Homeland does not suffer from any sophomore jinx. Some will say this second season does not reach the same lofty standards of season one, but the falloff is minimal at best.

Homeland is a thinking person’s version of 24, built around a wildly provocative premise at first glance. Interpreting the original Manchurian Candidate scenario for a new century, how would it look if al-Qaeda captured an American POW and then systematically brainwashed him for eight years, eventually turning him into a covert terrorist against America? Homeland answers that question in a thoughtful and carefully laid-out story arc, completely filled by multi-dimensional characters. Its primary success lies in keeping the shocking twists largely unpredictable, occurring when the viewer least suspects it.

When the season first opens, CIA agent Carrie Mathison has been fired from her job in the agency and voluntarily undergone electroconvulsive therapy to deal with her mental problems. She’s a broken woman, resting comfortably with her parents. Congressman Nicholas Brody’s personal story has made him popular in office and has now become the likely running mate for the next Presidential nominee, the current Vice President. Could the former POW, brainwashed by terrorists to do their bidding, be destined for the Oval Office?

The CIA is forced to bring Carrie back in on a case when one of her old contacts demands to see her in Beirut. Carrie is given vital information about Abu Nazir, the terrorist mastermind behind Brody’s turning. Homeland’s more suave version of Osama bin Laden, Nazir is a ruthless, intelligent villain, dedicated to committing jihad against the United States and her allies. The motivation behind this latest plot is an Israeli attack on Iran. Homeland touches on a number of hot-button issues without ever delving too deeply into political matters, instead preferring to focus on the espionage behind the scenes.

Given the unpredictable nature of the story is one of Homeland’s key charms, I will avoid further discussion of specific plot developments. Needless to say, Brody and Carrie’s lives become further entangled as they resume the beguiling mix of desire and deceit that made season one so successful. Carrie’s fragile psyche is what makes her such a compelling character, always teetering on the edge of paranoia and suspicion. She is a flawed person with real nuance to her personality, completely believable as she hunts down Abu Nazir and attempts to stop a massive terror attack on American soil. It is a performance by Claire Danes justly awarded multiple acting awards.

If Homeland has one flaw in its second season, it is Brody’s two children, specifically his teenage daughter Dana. A useless and tiring subplot concerning Dana and her boyfriend runs most of the season, slightly diminishing a nearly impeccable story. Brody’s family is critical to his character, as Brody increasingly has to lie to them about his secret life. His wife Jessica (Morena Baccarin) pulls away from Brody as she catches him in more and more lies, a good woman caught in an impossible situation as the man she once loved is gone. It is a star-making turn for Morena Baccarin, who had previously been known for eye candy roles more than anything else.

Homeland is one of the best shows currently running on television, finely crafted and polished. The series is heavily serialized, so one should start watching from the first season before dipping into this thrilling second season. 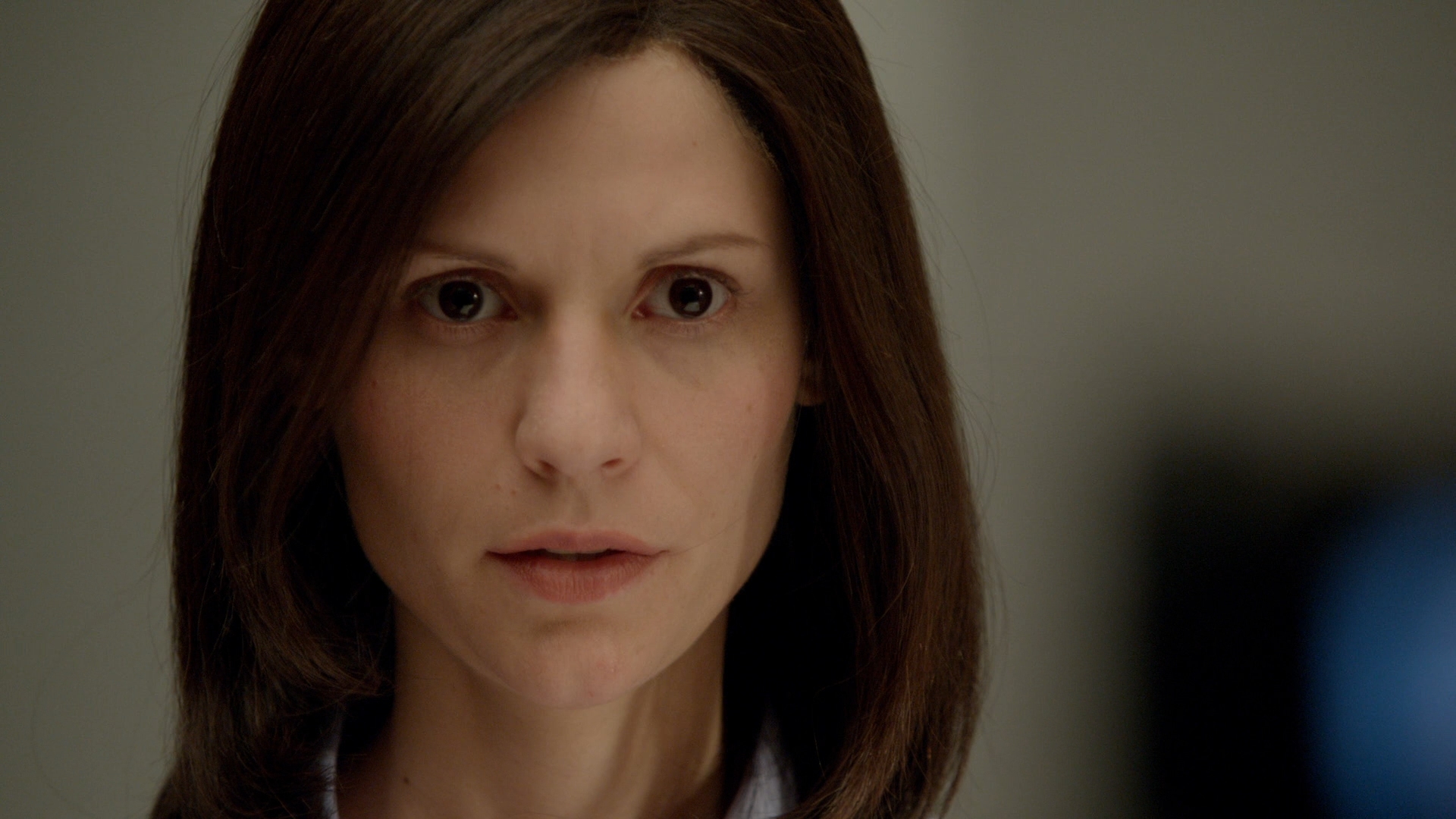 If you can say only one thing about Homeland’s picture quality, is that it looks outstanding on Blu-ray. This is a high-quality, big-budget cable production, shot on the latest iteration of the Arri Alexa Plus digital camera. 20th Century Fox has given it a stellar treatment, spreading the twelve episodes evenly over three BD-50s. The AVC video encode only averages approximately 20.49 Mbps over the first disc, but it handles the pristine video without notable noise or artifacting.

Homeland is presented in its native 1.78:1 aspect ratio at 1080P. Accurate color rendition and crystal-clarity are backed by its nearly perfect contrast and balanced palette. The only flaw, a very slight one, is the occasional hint of noise in the darkest shots. Minor crushing occurs once in a while, though the black levels are largely deep and inky. The digital cinematography eschews bright lighting, preferring a more subdued tone common to dramatic features.

Homeland excels in its highly revealing close-ups and medium-range shots, highlighting superior depth and focus. The level of high-frequency content in tighter shots exceed what most films are capable of down to the pores. Every inch of Damian Lewis and Claire Danes’ faces are on complete display. Homeland ranks with the best on the format in this crucial category.

Homeland is a series driven more by dialogue than chaotic action, so the 5.1 DTS-HD MA soundtrack is not quite on par with its fantastic video quality. A handful of thrilling sequences get the full surround treatment, sprucing up the mix with a hefty amount of bass and directionality befitting a recent show. However, most of the time this is not a particularly energetic mix beyond spreading the score beyond the front soundstage and introducing subtle surround events. Dialogue is perfectly clear and intelligible, even during the quieter espionage moments. Overall, the mix is solid without being especially memorable.

A hidden 5.1 Japanese DTS soundtrack is also included. Optional subtitles include: English SDH, Spanish, French and Japanese. They are presented in a white font.

For such a great series, Fox has somewhat skimped out on special features. They are spread over all three discs, primarily on disc three. A slipcover with a velcro-fastened cover is included. A few BD-Live trailers precede the main menu.

Deleted Scenes (HD) – Three very brief deleted scenes are included which don’t even add up to five minutes in total. They are completely finished but seem inconsequential to the season’s story.

Returning To The Homeland: Filming In Israel (07:52 in HD) – A featurette from behind the scenes as the show films in Israel to stand-in for Beirut.

The Border: A Prologue To Season Three (01:40 in HD) – A teaser for the upcoming season.

A Super 8 Film Diary By Damian Lewis (11:05 in HD) – A care-free featurette shot by star Damian Lewis, on an actual Super 8 camera.

The Choice: The Making of The Season Finale (15:41 in HD) – The only special feature of real significance. This compelling featurette goes through the season’s outstanding last episode in a thorough manner.