A more personal Tony Stark emerges from the wreckage of New York in Iron Man 3, anxious and reeling from the spectacle of multi-dimensional beings vanquished in The Avengers (3D Blu-ray review). It’s a new angle, a means of keeping what should be a repetitious showdown between good and evil freshly designed. This new Marvel universe approach clamps down on kitsch, broadening emotions and keeping Tony Stark (Robert Downey Jr.) less inclined to snap back with retorts.

Our villain is The Mandarin (Ben Kingsley), an archetypal terrorist who records low grade video from an unknown location and broadcasts them worldwide. His team includes people injected with an unstable regenerating serum, explosively rupturing victims through this vicious genetic breakthrough.

Mandarin’s appearance is implanted at a dangerous low for the title hero, Stark sleepless, suffering anxiety attacks, and lagging technologically. His relationship with Pepper Potts (Gwyneth Paltrow) is straining, and Stark’s superstar status has been dimmed by the arrival of Iron Patriot, or rather War Machine (Don Cheadle) decked in American hues.

Battles erupt in unexpected fashion, and with a generous intensity that enhances peril. Stark is not one to fall from success, but Iron Man 3 pushes limits, the emotionally tormented hero sagging in focus. Mandarin is a direct villain, even if their first meeting comes a third into the film. Kingsley’s cohorts tear down a cocky symbol of wealth, Stark’s ocean side mansion, in a stunningly visual sequence of absolute destruction.

As technology outside of the Marvel universe has blossomed, it has allowed pages upon pages of visual effect dazzlers to over perform. Iron Man 3 is not a victim, pacing itself to blast the screen with expected explosions, while keeping Stark downed, cut, and bloody. None of it works better than with a loner grade schooler Harley (Ty Simpkins) who creates an invitation to Stark’s rambunctious – sometimes cruel – playfulness. Banter livens the atmosphere as investigative methods search for answers to the Mandarin’s public assaults, an otherwise down series of plotting scenarios brightened by dialog.

Under the guise of Disney and the remarkable rebirth of Marvel as a mainstream attraction, Iron Man 3 may not be fond of risks, although it adores the chance to throw its audience off. The franchise has ditched its grounding for the sake of wilder, more scattered action and an inexplicable loophole in an otherwise definitive character death. Iron Man 3 is not brave enough to venture into harsh realities, even taking its diabolical, seemingly reality-born villain and turning it in the film’s zaniest twist.

Leaving audiences with plentiful story potential, Iron Man is going places, and not merely into the skyline to shoot things. It has created the potential to be braver, settling down in its own universe while turning Stark into something more than a man with a glowing chest. That is the type of directional shift to be proud of, one built on character, not an ever increasing arsenal. 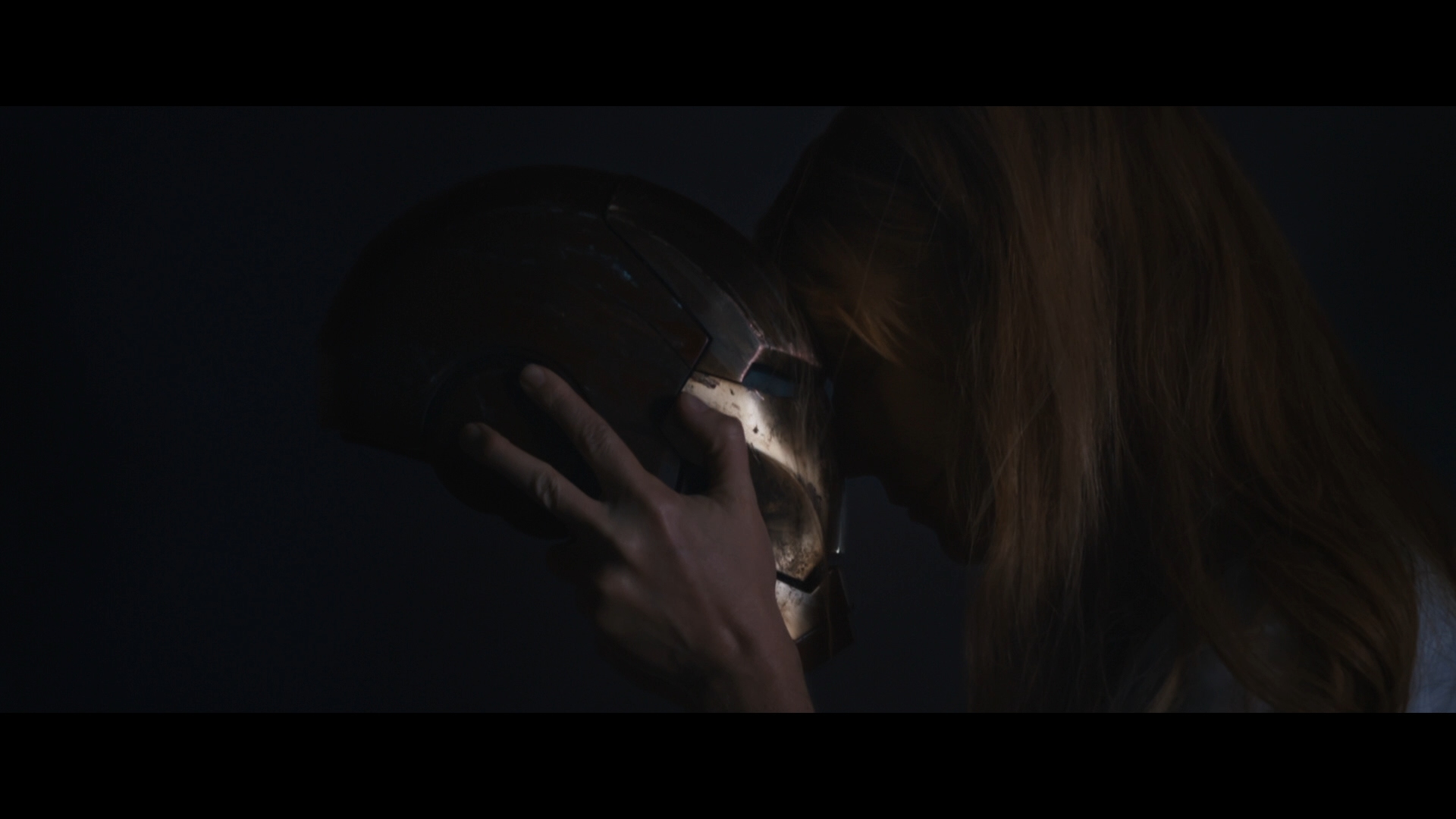 Iron Man 3 will match its theatrical presentation at home on Blu-ray, and that veers from positivity. Hopefully an anomaly and not a trend, this sequel is held back by evidence of digital tampering, sharpening specifically, which weighs on close-ups and roughens medium shots. Base fidelity is squandered, running outside of the Arri Alexa’s usually dominating performance range. Somewhere, post production fell ill, or Shane Black & cinematographer John Toll wanted the gloss of digital removed in an attempt to simulate filmic qualities. The effect appears artificial instead, a mimic, with gaping holes in the quality spectrum.

Iron Man 3 does sport definition. Computer generated effects are splendid, and metallic suits are nothing short of “marvels” on screen. And yes, while many shots inside the suit will render exceptional fidelity, there is a certain edginess to them, lacking in gloss and purity evident in the best summer blockbusters. Exteriors are patchy, and hints of aliasing on certain lines (the mobile phone outline connected to a downed MK42) further bring forth evidence.

Black pushes for darkness and realizes a dim vision, with little draftiness for light. Black levels become essential, and perform admirably. Shadow details are substantial, with room for a few lapses in density. Contrast is peppy in daylight, with heavy sun and no wash out effect. To match a tonal shift, coloring explores blues, and spreads into flesh tones. At times, the effect feels monochrome. Reds and golds of iconic armor are washed with dour hue selection. Dusty earth tones are considered peaks. In terms of compression, ridiculously high bitrates force artifacts away from the eye, and source noise – if present at all – is handled beautifully. Aside from implications of tampered visuals, this is low light video at its purest.

Iron Man 3 proves to be a giving post conversion, 3D effect swarming to better scale environments such as Stark’s workshop or a bar during an otherwise plain conversation. Enhancements include image deepening embers and snow, pushing out otherwise static scenes with worthwhile boosts. Expected murky underwater footage is a surprise in 3D, the action scene propped up on collapsing debris and extensive particles.

Conversions continue to surprise with their aggressiveness (if not screen pushing pop), and with a plethora of action scenes working in tandem, Iron Man 3 works out a victory. Jet flames from the rear of the suit are amazing as they stretch toward the viewer, and missiles/laser blasts carry equal trails. Shots for scale are outstanding, and the highlight is undoubtedly an aerial rescue as passengers fall from a crashing jetliner, this despite hectic camera work. However, with contrast already slim given the cinematography, sets prone to cross talk will find themselves bothered by light sources, and some instances are flat by design. Footage only loses additional luster with glasses on.

Adjectives are many to describe masterful prowess found in this aggressive and brutal DTS-HD audio job. Superior explosions rattle everything, while gunfire smoothly adds weight to each trigger pull. Engines rumble into the LFE, and dramatic cues in the score are outstanding when they drop. A water tower collapse feels enormous, and scattering liquid plunges into surround channels.

Utilizing each speaker of this 7.1 mix – and consistently – action scenes become a beacon of reference material. Effects swirl through the soundfield effortlessly, and track so well as to be invisible in their transitions. Gunshots feel multi-directional, and jetting suits during Iron Man 3’s spirited finale sweep across available hardware.

If there is a scene to single out, it must be an attack on Stark’s home, brought to life with a blistering missile assault, immense debris tracking, and boomy bass which is nothing short of perfection. Element balance works in dialogue without a loss of words, while those shots underwater blend the rush of water with deep, impacting LFE as the shattered home finds a resting place. Spectacular work.

Director/co-writer Shane Black and co-writer Drew Pearce hop onto the disc for a consistently active commentary for a positive intro to Disney’s otherwise slim bonus slate. Marvel’s push for connecting points in their film universe continues with another One Shot, a 15-minute short titled Agent Carter, following Peggy Carter, Captain America’s romantic interest. Iron Man 3 Unmasked is best skipped, an all too short 11-minute featurette low on content. A deconstruction of a key action scene is impressive, the best of behind-the-scenes blips offered at nine minutes. Sixteen minutes of deleted scenes are fair, a gag reel is short but has laughs, and a preview of Thor: The Dark World is hardly worth the hype for a two minute trailer.