Disconnect exists because we’re connected, too connected, to information. It exists as a gauged response to what some would see as a catastrophic breakdown of communication, in an era where ironically communication has never been easier.

Disconnect needs no launching pads; society has provided one. With an opulence of shared social media, lives are spilled into an open, public eye platform. Decisions are cast off as regrettable only when those effects are mirrored in daily lives. Blinking across computer monitors, we take letters at face value, ill considered of the other side. Much of director Henry Alex Rubin’s first fictional feature exists in an identifiable reality, culled from themes and rhythms of nightly news, none of them positive.

We rarely attach to the cheerful. Maybe the internet did that to us, or Disconnect simply strides negative glances towards infatuation with glowing mobile screens. Humanities best comes from cyberspace, but so does the unthinkable.

Disconnect is thus centered on three sets of people, including two adolescents unprepared for digital consequences as they sheepishly hide behind fake profiles and consumer devices. They are torturing a vulnerable, distracted teenager, fun at first and then horrifying. A married couple seeks solace in digital text, one in a support group, another bleeding dry from gambling. A third is a local fluff reporter who sees sexually exploited teens in need of help, when she herself chooses exploitation.

Andrew Stern pens this often brutal tiered narrative of lost empathy and gained indifference, all stories intersected, symbolic of crossing Wi-Fi airways. It has the intelligent quota to match the mastery of 2004’s racially impacted Crash. In the wake of Paul Haggis’ film, the joined ensemble – as a sub-genre – spilled into expressive cinema, and it’s only now with technology’s lock does the formula prove sensible to return.

Disconnect questions its audience to discover their own divided personalities, look inside and realize what they’re missing. Tagline, “Look up,” is a subtle and needed jab, while the film steers into a cautionary yet wholly gripping slide of thematic pressure. Yes, Disconnect is enamored with worst case scenarios, but so often these situations remain undiscovered until they reach such saturation.

Online in Disconnect’s world people think, no, believe they know one another. They trust and embed themselves into a persona. When they meet, it becomes noxious. Personal encounters desecrate the walled online front, knocking down safety barriers present when depicted through web cams or keyboards. Scripting pushes and bends until snapping is inevitable, and those physical outbursts are destined conclusions.

Disconnect begs for discomfort. It achieves that goal, forcing self-reflection without becoming indulgent in society’s decline to adapt. This is unsettling material, and yet we needed it. Disconnect is a metaphorical slap to remove ourselves from an insect-like draw to shining lights and yes, look up. 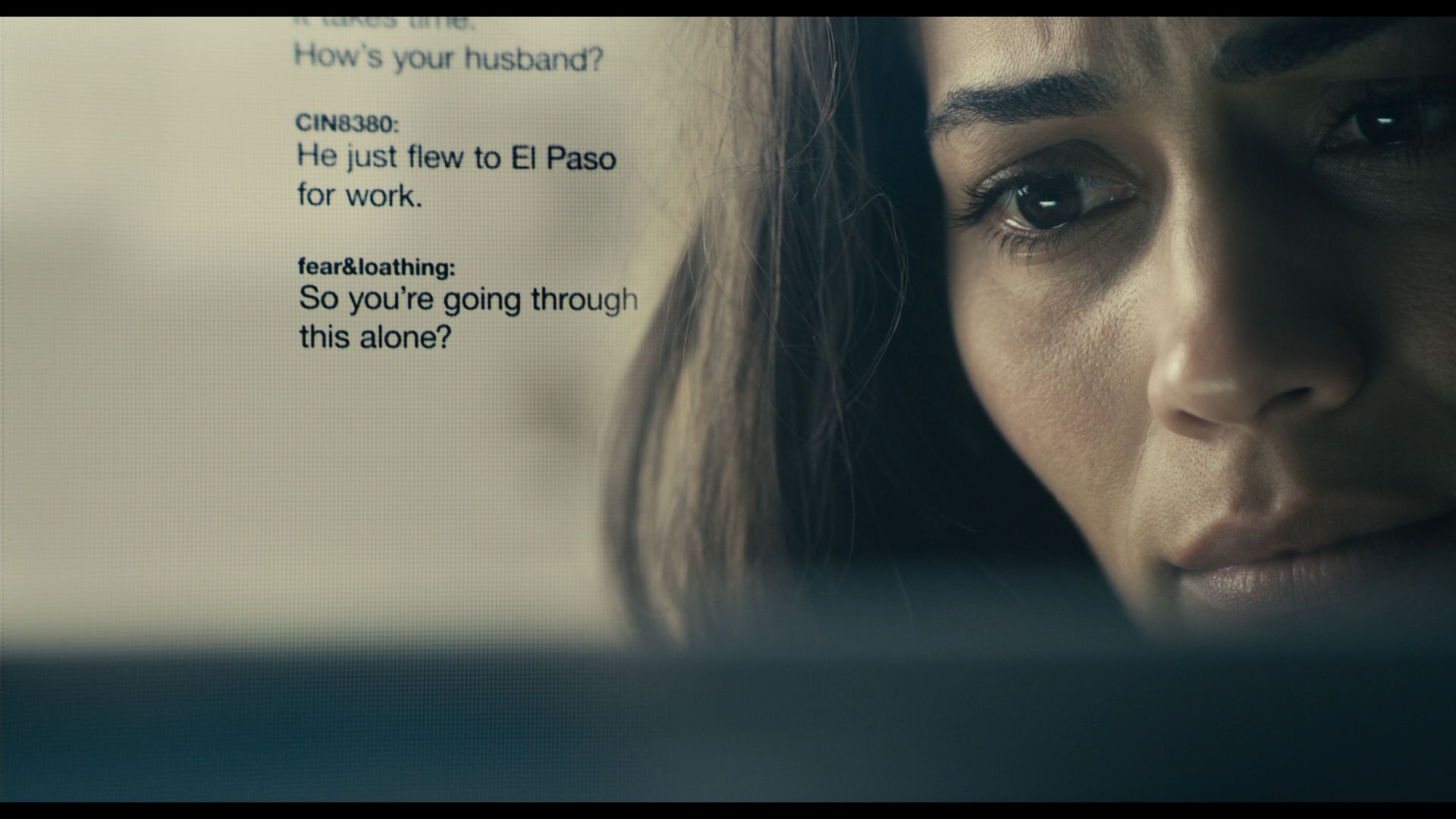 Orange and teals are many for this all digital production, fascinated with draining color schemes while simultaneously rejecting primary embellishments. Flesh tones are color coded to the screens which peer back at them, solidified in blues or brash whites. Natural never hits this dour presentation, choosing instead to mirror its damning portrayal of community.

Disconnect wanders, soft to sharp and back again on a whim. Cinematography is unnervingly close, planted often at arms length to replicate a device’s perspective as we click away. Those close-ups are genuine in their clarity, unphased by noise and harnessing resolution. Medium shots scatter, dispelling with those clear notions, and less often losing it all for entirely digital passes.

Lionsgate bats the material away from their AVC encode, with the exception of a singular banding incident. Disc space is well utilized and spread around a hearty BD-50, and sans source noise can be freed to process clear imagery.

Black levels will cascade on general mediocrity, present if indifferent to their job. They hardly reach full development, and sap some life from typical low light cinematography. This is crucial to the finishing rounds as drama splinters between characters, but nonetheless captures enough to be given a passing grade.

You will need to be lenient to accept the flatness of Disconnect’s centered soundstage. With an occasional spill into the stereos and swelling of an outstanding (perfect even) accompanying score, the film puts an intense focus on dialog. Ambient effects are few outside of loud music which can thump the LFE slightly in passing.

City streets are anemic, with barely noticeable cars whipping by, and a rain effect won’t shoot for gusto; it just is. Maybe the lack of notable audio design is part of the problem brought on by our disconnect from reality, or maybe that’s looking too far into it. Put money on the latter.

Director Henry-Alex Rubin delves into this work in a solo commentary track, highlighting these extras which continue into Making the Connections. This traditional making-of follows the origin story of the film, its themes, casting, and more for 27-minutes of content. Recording Session zeros in on the conducting session during a critical dramatic moment, filling four minutes. Lionsgate props everything up with trailers.