HBO delves into the private life of flamboyant entertainer Liberace (Michael Douglas) through a well-produced but ultimately lifeless biopic. No expense was spared in this big-budget adaptation of the memoir from Liberace’s one-time lover, Scott Thorson. Steven Soderbergh directs the film, guiding Michael Douglas and Matt Damon through awkward kissing scenes between the two stars and their two characters’ turbulent romance.

Behind The Candelabra chooses to focus almost entirely on a brief peek inside Liberace’s private life, starting in 1977 when he meets a very young Scott Thorson (Matt Damon) through a mutual acquaintance. Liberace was already a world-famous star pianist by this time in his life, having gained his initial fame as one of television’s earliest stars in the 1950s. Unbeknownst to most of his female fans for decades, Liberace was a closeted homosexual his entire life and continued the charade of being a heterosexual nearly to his death, fearing it would hurt his ability to earn money as a famous entertainer and celebrity if his orientation became public.

Scott Thorson and Liberace continued their private relationship for five years, as the wealthy pianist lived an opulent lifestyle in Las Vegas and showered his parade of young partners with money and gifts. Behind The Candelabra paints the two mens’ relationship as somewhat like a loving marriage at times, though it depicts Liberace’s strange idiosyncrasies and demands of Thorson. Liberace wields his power over Thorson in getting plastic surgery, to mold Thorson’s face into a resemblance of a young Liberace, among other things.

Behind The Candelabra has a number of stars make cameo appearances like Rob Lowe and Debbie Reynolds. Lowe shows up as Liberace’s plastic surgeon, dispensing drugs to Scott for weight loss. Scott eventually becomes addicted to the narcotics, painted as the reason for Liberace’s eventual dismissal of the man and their break-up. Scott does get a small settlement from Liberace after suing him for palimony.

Liberace had a very specific affectation and demeanor in his public appearances. Mr. Showmanship always played his piano with a certain style, always including his trademark candelabra on the piano as he played it. Michael Douglas does his best at mimicking the celebrity’s mannerisms but it is not one of his best performances. It is an admirable failure but a failure, nonetheless. Damon is much better as the naïve Thorson, shown as unsure of his status in Liberace’s life until the man is on his death bed.

Behind The Candelabra overstays its welcome a bit as it dwells too heavily on the relationship between Scott and Liberace. Liberace had been a star for over two decades by the time he first met Scott and the movie largely glosses over that era. Instead it chooses to detail almost every aspect of Liberace’s private lifestyle away from the stage, in the time he shared with Thorson in the late 1970s. Behind The Candelabra is a competent, well-executed movie about Liberace’s flamboyant personal life. It does not have much to offer beyond that to anyone but Liberace’s fans. 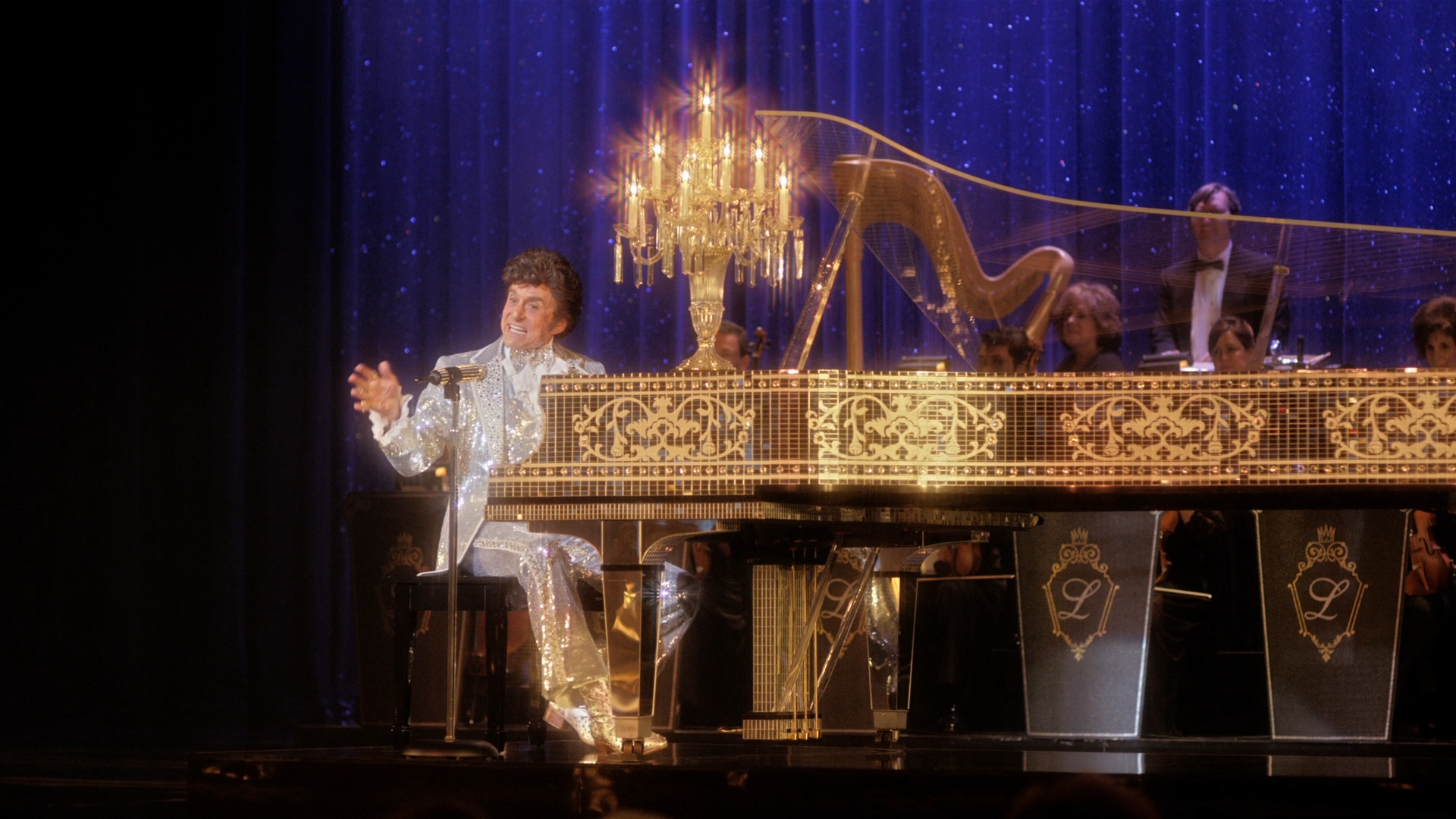 Behind the Candelabra is served up in a sumptuous 1080P presentation, showcasing the lavish production design highlighting Liberace’s wealthy lifestyle. It has already won a number of technical and creative Emmy Awards for its attention to detail in recreating the entertainer’s extravagant mansion in Las Vegas. The cinematography, using the RED Epic digital camera, is heavily stylized in its approach to lighting and mood, suffusing the film with a soft, warm glow. Some intentional processing takes it out of the realm as a serious videophile’s choice.

The proficient AVC video encode averages 17.95 Mbps for the main feature. Behind The Candelabra was carefully shot at 4K and struck from a Digital Intermediate. A serious amount of color correction and processing has been applied to the transfer in achieving its final appearance on home video. The transfer has been unquestionably filtered and softened, removing a certain level of fine detail and leaving waxy flesh-tones at times.

Clarity still remains quite high but detail is not on par with the best image quality possible. From the glittering stages of Liberace’s performances to his palatial homes, the lighting almost has a candle-lit quality. The glamorous lighting leads to blooming white levels on occasion, though the black levels are suitably impressive most of the time.

Behind the Candelabra has excellent picture quality with no technical issues to mention. The compression handles its super-clean digital video with ease. Sharpness and focal depth are its strongest attributes. The stylized mood of its digital cinematography fits the setting and story perfectly well.

Behind the Candelabra is provided with a strong 5.1 DTS-HD MA soundtrack which balances the light piano music Liberace was famous for and an appropriate engagement of the entire soundfield. Its perfect fidelity and accurate dialogue reproduction are essential for the biopic’s candid moments and musical performances. The mix barely engages the subwoofer but does use a nice sprinkling of directionality when necessary. This is not a soundtrack that blows the roof off the house with surround tricks. Surrounds are subtly used for effect to enhance the score and occasional event.

HBO has also provided a 2.0 Spanish DTS soundtrack at 256 kbps. English SDH, French, and Spanish subtitles are all options, presented in a white font.

HBO has provided this set with a digital copy code, good for redemption on VUDU, Flixster and iTunes. The VUDU code redeems in HDX, while Flixster gives you the UltraViolet version.

The Making Of Behind The Candelabra (14:03 in 1080i) – A standard piece of fluffy promotional vehicle, featuring comments from most of the cast and main crew. There is some interesting stuff found in this featurette, focusing on Liberace’s intricate costume design and opulent living. The main problem is that it attempts to cover too much ground in its short running time.