The British Empire was on the wane in the early years of the 20th Century. Emblematic of this decline was the changing moral structure of the aristocracy and a new feeling of egalitarianism sweeping the country. British playwright Tom Stoppard has adapted Ford Madox Ford’s series of four novels, covering the life and times of a proper English gentleman in that tumultuous era for the country. A lavish co-production between HBO and the BBC, Parade’s End is a thoroughly English period drama of some refinement.

Key to Parade’s End is the story of Christopher Tietjens (Benedict Cumberbatch), a brilliant aristocrat bound by an outdated code of honor and principles. The honorable Englishman ends up wed to a cruel, petty socialite in Sylvia (Rebecca Hall). The couple are a complete mis-match from the beginning and Christopher may not be the father of Sylvia’s son, though he still raises the boy as his own child. Christopher suffers in silence as his wife runs around town with another man. She turns the reserved intellectual into a cuckold, flaunting her indiscretions to the couple’s wealthy social circle.  Sylvia treats men as her playthings and likes to push Christopher’s buttons. Her own mother says Sylvia doesn’t deserve the man. Sylvia’s reputation and scandalous behavior eventually destroys Christopher’s career in the Imperial Department of Statistics.

Christopher is a sharply drawn character, superbly played by Benedict Cumberbatch. Cumberbatch is the British actor of the moment, coming off his critically acclaimed handling of Sherlock Holmes in the BBC’s recent television adaptation. He strikes the proper tone for the clever English nobleman with a mild manner, brimming with intelligence. The acting throughout the mini-series is uniformly excellent.

Tied to quaint notions about marriage and divorce bred into him by a century of Victorian morality, Christopher refuses to divorce Sylvia when she finally returns from her trip abroad with her lover. She pledges to give up her amorous adventures for the sake of this completely chaste relationship, a strange marriage arrangement by any standard. Bound by his code of conduct, Christopher is content to live in a loveless marriage and remain pure himself.

This peculiarly English relationship and marriage, tied to old ideas about the aristocracy, begins to fall apart when Christopher finally meets a woman he truly loves. Valentine Wannop (Adelaide Clemens) is a young, hopelessly idealistic suffragette when she first meets the older Christopher. Valentine is a thoughtful supporter of women’s rights, immediately sharing a deeper connection with the reserved aristocrat than Sylvia ever could. A staple of English romance, their growing love remains unconsummated over a period of years. World War I intrudes on their potential relationship and events conspire to keep them separated. Everyone is eventually affected by the changes wrought by the war.

Unfolding over five one-hour episodes, Parade’s End takes it time to develop. The love triangle at the center of the story gets a bit contrived and tedious by its conclusion. Most will foresee the ending coming, though the intimate character study is more about the journey getting there. Fairly refreshing for a period drama is the complete absence of modern attitudes inserted into the era of World War I. The characters hew closely to prevailing sentiments and principles of that era in a realistic manner. Parade’s End is not a disguised parable about modern life.

Parade’s End is an ambitious mini-series that mostly succeeds due to its gifted acting and engaging cast of characters. However, it lacks the wit and pizazz of better period pieces. The story would have been better served if parts had ended up on the cutting room floor. Its sprawling structure drags as it attempts to delay the inevitable conclusion. 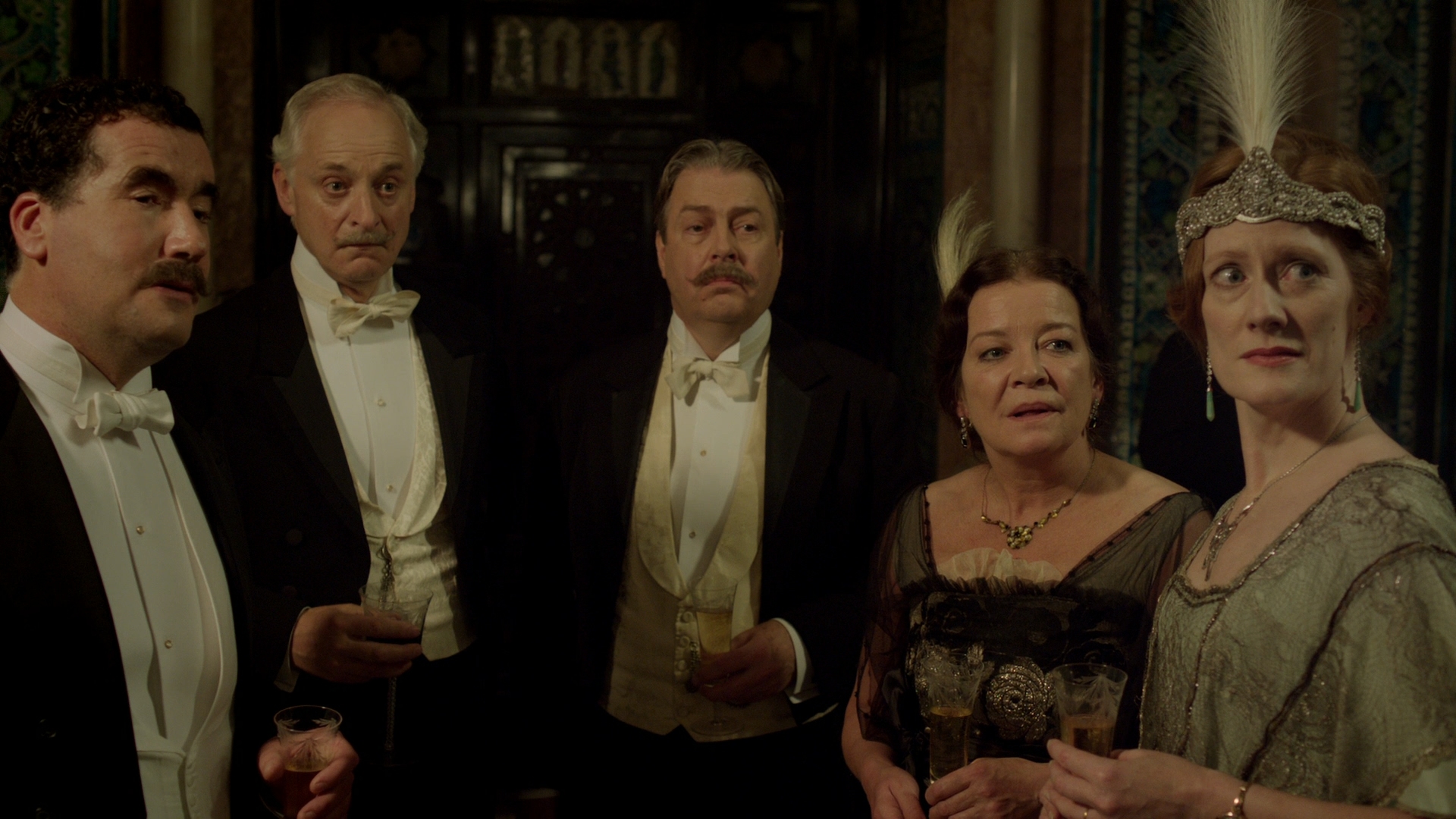 Parade’s End is an opulent production for the BBC, intended to accurately reproduce its Edwardian era setting down to the tiniest detail. Shot using the Arri Alexa digital camera, Parade’s End looks gorgeous for a television mini-series. Production values are on par with major theatrical features, reveling in the grand scale of the English aristocracy’s large estates. It is not up to the level of demo material, but the crisp picture is stunning on occasion.

HBO has spread the five episodes over two BD-50s, using a solid but unspectacular AVC video encode. The main feature is presented in 1080P resolution at 1.78:1, its intended aspect ratio. The cinematography is exquisite, highlighting authentic English architecture and the country’s expansive landscapes. Christopher first runs into Valentine on a golf course as she’s protesting for the suffrage movement and the greens in the course are spectacular. Parade’s End never looks better than in the carefully composed establishing shots which frame the narrative. Only as the story moves to the trenches of France does the color palette do anything but sparkle.

Fine detail is easily evident in close-ups. Parade’s End has that extra touch of pure resolution on Blu-ray, which creates an uncanny level of facial detail and clarity matched by few discs. The sharp video has a pleasing sense of depth and dimension, though it does not reach the exaggerated levels of action films. If the image has a true fault, it is the merely adequate black levels. Shadow delineation declines in quality at times, dropping overall clarity in those darker moments.

The primary 5.1 DTS-HD MA soundtrack is a rousing mix, juicing up the staid drama with a cacophony of atmospheric sound elements. The conventional orchestral score is subdued but a welcome addition, supporting the ongoing developments in the love triangle with elegance. Parade’s End starts to really employ the surround channels as the setting shifts to war in France, as Christopher eventually ends up on the front lines. An effective amount of thump and low-end bass is delivered as air raids bomb Christopher’s encampment. For a romance-driven period drama, Parade’s End has one of the better modern surround mixes.

HBO has also provided 5.1 French DTS and 2.0 Spanish DTS soundtracks. Subtitles are displayed in a white font and include: English SDH, Spanish, French.

HBO has provided one extra feature of note, but it’s a substantial and interesting supplement. Also included is a digital copy code, redeemable on iTunes, VUDU and Flixster in HD. The two-disc set comes inside a custom cardboard sleeve.

Tom Stoppard Interview On KCRW’s The Treatment with Elvis Mitchell (28:04) – A recording of Mitchell’s radio interview with Tom Stoppard, this is an in-depth exploration of the mini-series. Stoppard delves into his reasoning about certain characters and process for adapting the novels. This is a heavyweight, erudite interview with the show’s principal creator. Most will know Mitchell from his interviews on TCM.