In New York’s 1982 cultural nerve center, Chris Potamias entrenched himself in the state’s record financial heist, a $20 million haul from his employer, Empire State Armored Truck. That story is true, along with roughly $10 million which, to this day, remains unaccounted for. Potamias, despite being brazen and incalculably stupid in his former years, still outsmarted Federal Agents… or so we assume.

Potamias searches for a way to go straight, kicked from contention as NYPD due to a minor drug possession charge. Seeking to right a corporate wrong when a delivery is busted in a shoot out, Potamias discovers, with ease, how lackadaisical Empire State is with their safe room. Peer pressured by Eddie’s brash methods, the duo become entangled with local mob outfits, which only serves to turn simplicity into tiered complexity.

Dwayne Johnson steps into surprisingly small direct-to-video shoes as the lead detective assigned the case, suspicious of Potamias’ involvement. Empire State crumbles without dramatic weight, a heist film unconcerned with tension and often satirically riffing cultural mainstays. Johnson’s imposing figure does little more than huff while staring down suspects, and Hemsworth is drab as material packs in around him.

Empire State will belong to Angarano, if only because his screechy, twitchy demeanor situates above other characters. Eddie is caustic to every scene which carries his presence, deeply on edge and impossibly connected to Potamias’ benign personality. Even in crime, their companionship is mismatched, and Empire State fails to bond them.

Action elements attempt to wake up this listless ordeal, piercing gunfire a shock in volume, without set-ups to establish suspense. Shots fired are dropped with immediacy for additional sordid dialog, spiraling Empire State into a blob of mushy storytelling fundamentals.

Empire State’s approach to non-fiction is squandered, an otherwise captivating tale of reckless, big headed youth with historical context in New York’s criminal underworld. Unlike Johnson’s Pain & Gain (Blu-ray review), where Michael Bay’s comedic splash perked up morbid evidence, Hemsworth and Angarano are asked to play inflexible characters. Empire State is often uncomfortable when mixed with its sadistic side, and to suffer through it with Eddie’s perpetual whine is too much to ask of an audience. 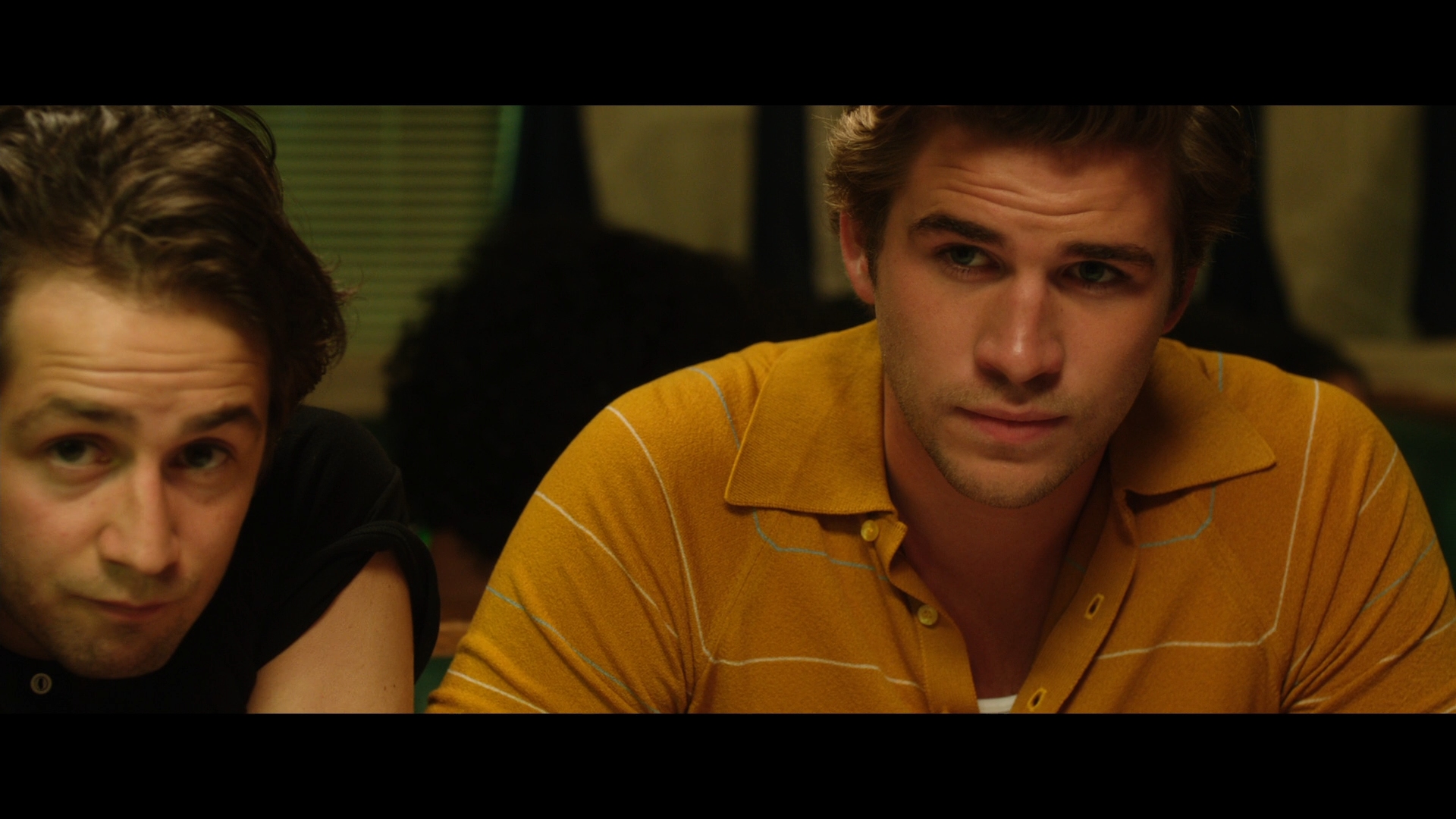 Empire State carries minimal film-based footage – which looks outstanding in Lionsgate’s AVC encode – but is generally presented from the digital heart of Arri’s all digital Alexa Plus. Of considerable application are black levels (beyond usual digital lows), showing hints of unkindness to shadow detail, if persistently deep. Much of Empire State occurs under darkness, creating a necessity for denseness in these images.

With a vintage Kodak-esque yellow push, the ’80s are digitally color graded to mimic the era. Flesh tones find themselves freed from drastic discoloration, while primaries can leap out from under certain light sources. Seedy, mob-owned bars are unflinching with dramatically overdone red lighting schemes.

The film opens and closes on tape-based footage culled from local news reports, degraded from decades of crumbling sources. It captures expectations. Empire State does well for itself though, resolving images sans noise to capture clarity instead of an pronounced source.

Fidelity will take shots in close, medium photography rather bland. Empire State survives on sharpness, picking up fine stitching even if facial definition is spotty. New York aerial shots are stock, obvious from their grittier appearance which is presented on film and often sharpened. Empire State can be fidgety visually, but harnesses a controlled center which is typically pleasing.

Fitted with plentiful ambiance on city streets, this capable DTS-HD mix lacks weight, while making up for it with fantastic high-end pop. Shoot-outs are overly aggressive in their pitch, shots ringing out with an almost painful loudness, yet not necessarily outside of typical parameters. Surround use proves perky and active, while a stereo split can be employed as scenes dictate.

Outside of action, New York does feel alive with overhead trains or passing cars swirling into positionals. Inside a club, music swells and LFE throbs when moving to an interior. Empire State’s audio can feel inconsequential, yet finds itself active when called on.

Director Dito Montiel jumps into the extras with a solo commentary track, and three deleted scenes follow in the disc’s menu. Creating an Empire is thickly padded with finished footage and struggles to produce pertinent content for ten minutes. Anatomy of a Heist is required viewing, a sit down interview with Potamias today, at 53, as he recollects his actions. He makes for interesting viewing, and it’s a shame the movie does not.