A formless aberration from space munches on townsfolk in 1958’s seminal, The Blob. Manifestations of growing rebellion into 1960s America collide with thinning and exploitative monster munchers via Steve McQueen’s “18 but really 28” year old performance as screechy Steven Andrews.

On the cusp of pop culture, The Blob is a Hollywood story of implausibility, built on almost surreal funds of religious backers, fitted with a devilishly catchy theme song, while tapping into hints of growing teenage dissent. Blob happened because society said it had to, whether anyone realized the situation or not.

Unfairly criticized effects take a snapshot of ingenuity, a cinematic time capsule of cardboard backgrounds and silicone gel representing a ferocious outer space being plunging its goopy grip cross town. With its pulse on the necessities of box office bonanzas, Blob paralleled ineptitude and kitschy concepts of clunkers such as Bert I. Gordon’s insufferably stupid (plus pointlessly enjoyable) Beginning of the End. Yet, producers of The Blob decided to dazzle, jerking monster pictures from low-rent black & white origins into a splendor of brilliant color. Redness of the eponymous Blob would become iconic.

With heart, producer Jack H. Harris whips up a frenzy of teen suffering, dabbling in romantic complexities while tightly focused on frustrations. Cops ignore pleas, citizens treat them as lessers, and seniors bumble surefire plans. Perspective is removed from worldwide terror, and crimps lens work from the eyes of Andrews. Instead of siphoning scale, the method plunges audiences into Andrews’ world view, slightly selfish and wholly heroic. What teenager would believe they were unable to rescue Earth from its ills?

Thick-headed teens propel a snippy film, tight on its editing and rich in off-screen murder. Glimpses of a nameless, faceless being digesting those in its path carry enough punch to signal warning signs. Downington, Pennsylvania can, in fact, be destroyed by a glob of jello, and Blob works to settle an audience in understandable disbelief.

Blob would become a cultural beacon of 1950’s America, representative of cautious ideals, post-war safety, and an overarching genre archetypal. Swooning parodies would latch onto the other-worldliness within this singular creature epic, abandoning a slew of others who took to traditional cliches. Blob producers would eschew stuffy, smoking scientists as central protagonists, sharply realizing their audience was no longer wearing leisure suits. Viewership was often as unprofessional as the film’s themselves, so why not work in plotting that speaks to growing hot-rodding disobedience?

It is time for Blob to return. Generational turn over demands it, as this loose franchise represents needs and wants of successive bearings. Whereas a late ’80s remake would slather screens in bloodshed as Hollywood effects epitomized practical gore, modernized technique would represent banded together internet culture, bred on video games and computer graphics. After all, 1958’s teens led us to believe we were safe from the Blob, “as long as the arctic remains cold.” This generation is more screwed than we realize. 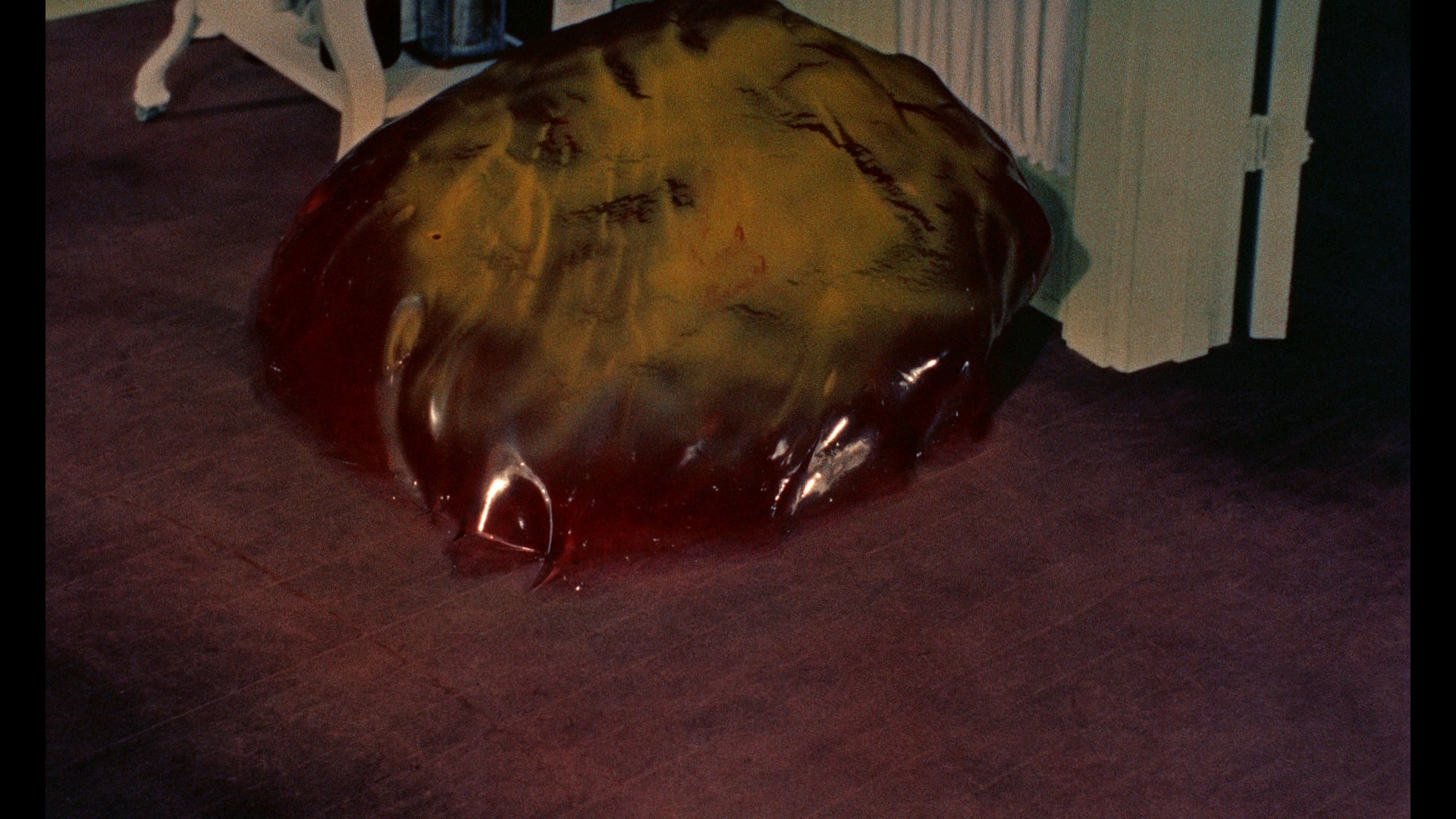 Criterion unleashes a beautiful 4K master for this piece of pop iconography, graced with superior clean-up which wipes the slate of damage to present The Blob in total clarity. While chintzy cinematography will often forget focal points, the sharpest shots are incredibly dense. Resolved definition behind a generously clean grain structure pokes out regularly, giving faces a texture they were never capable of prior.

Prevalent color offers a snapshot of lead painted walls with brilliant hues, and stunning cars. Flesh tones mirror a saturated environment, given heft without veering modern. Perilous reds signify the dazzle of space’s unfortunate gift to humankind, colored silicon unable to appear with any additional vibrancy. Afforded resolution picks up on changing texture as the critter switches positions, adding to its bouncy unearthly-ness.

Encoding comes no better, planted onto the disc with exceptionally high bitrates to render grain filmic, and never impeding on the presentation. While cinematography is rarely complex, it holds and projects a non-digital appearance. Adding bountiful richness is an active contrast, plus surprisingly enriching black levels, which – while missing total black – do still work to catapult depth successfully.

There is one caveat, and not restricted to Criterion’s Blob release. The fifth reel, running from 51 to 70-minute markers, is pulled from an interpositive. While still 35mm, visuals indicate anything but. Fidelity is removed for a strictly filtered existence, and lush grain is siphoned from this print to become mush. Damage to the camera negative forces Blob into a visual corner where it will likely remain forever.

With mild moments of hiss, Blob turns into a slick period effort of limited fault. Even those interpositive scenes exhibit no discernible drop in audio sharpness.

Criterion released The Blob to DVD in 2000, and as such, they carry over commentary tracks. Producer Jack Harris is paired with historian Bruce Eder, and director Irvin S. Yeaworth chats with actor Robert Fields on the second. A series of sharp stills, in addition to the original trailer, mark off a nearly non-existent features menu. However, photos of visual effect processes are wonderful.