Actually, more than some one lives by No One Lives’ climax, but few can question the harsh allure of that title. Gore maven Ryuhei Kitamura helms this specialized splatter-a-thon, bolstered by a first round narrative spiral with outrageous consequences.

No One Lives demands audience blindness outside of its genre classification and stern MPAA warnings; its twists are too critical for spoilers. Karo syrup stock undoubtedly doubled during filming, and practical effects houses lunged at the chance to craft images of crusty internal organs, slashed faces, and brutally unclean gunshot wounds.

Paired with currently family friendly WWE Films and former Godzilla Final Wars director Kitamura, No One Lives feels rogue, even outside of its questionable, murderous thought processes. This film depicts a determined killer wiling to gut another human, only to hide inside of the remains. The project exhibits no shyness for human desecration.

Awkward line delivery and oversell of pro wrestler Brodus Clay bake in low rent production value, akin to something kitschy amongst dazzlingly vicious realism. No One Lives is cruddy, dirty, and awash in 16mm grain to better imbue an unmistakably ’80s visage. Video stores of the era would clamor for gutsy and decisive material such as this, a sharpened, profitable shelf talker.

Despite being survivalists, characters walk away unclean and damaged irreparably. No One Lives glazes its societal failures in entrails – of their own doing and otherwise – to eschew any locked down heroics. Main cast play up criminality, brash home invaders turning desperate as intent is revealed, only to have unheard of complications injected further at their safe house. Dialog is often reaching for anything other than expletives, providing a hard sell in boorish behavior.

Adelaide Clemens gives No One Lives legitimacy as Emma, a strikingly disturbed performance from a women on edge and in the midst of escape. Stone-eyed stares are indifferent to explicit bloodshed and reactions surrounding spilled internal organs. Others scream; Emma only stares.

No One Lives refuses to show sympathy, even for undeserving victims. Anyone involved is considered prey. Darkened and harsh, No One Lives’ fierce refusal to adequately create sane mindsets delivers an environment where violence seems logical, even as pacing slows. Kitamura’s direction and first time writer David Cohen’s outlandish conceptual work is never finessed, but slanted to slather screens in premium carnage. 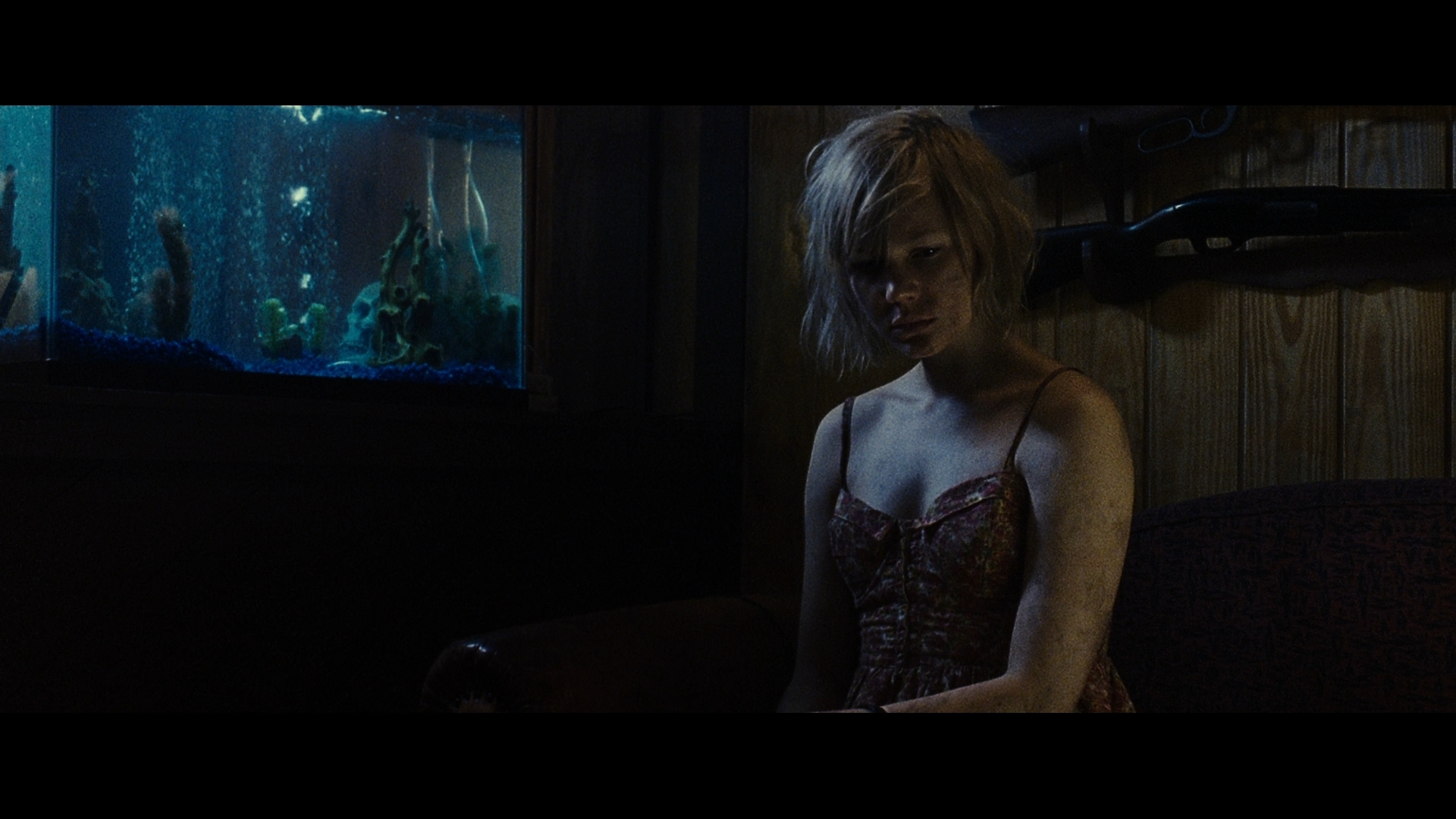 Anchor Bay distributes a difficult AVC encode for No One Lives, compression coming under fire and wandering immediately. As a format, 16mm is nothing to take lightly when transferred to digital, and in conjunction with already splotchy grain reproduction, No One Lives was doused in sharpening.

Halos and ringing bring after effects even if not directly visible. Resolution and fidelity suffer from harshness, flubs even crush happy black levels cannot hide in their pure black shadows. While film is unquestionably the source, manipulation has stepped in to inconsistently present material as such. In motion, grain even loses itself and appears as a smeared after effect.

This is beyond 16mm in general, which when done properly, caries a distinctive, resolute appearance. No One Lives is squandered, and smears during otherwise stable conversation. Pan shots can be rendered unrecognizable, and faces are lost in a bevy of apparent codec failure. Anchor Bay condenses this sub-90 minute feature to a BD-25, and does not particularly handle space restrictions well. Bitrates are adequate, only not for a source of this complexity.

No One Lives will issue some positivity; this is not a visual junker so much as it is troubled. Colors have a rare density where applicable, flesh tones scanning a bevy of hues and primaries can be superb. Blood never feels wasted with reds determined to carry splatter effects. Fine detail in close provides substantial weight too, facial close-ups proudly resolving minutiae. It’s a shame these visual opportunities feel like anomalies.

Exaggeration is evident in this TrueHD mix job, amplifying surrounds during shoot-outs to poke rear channels through as dominant speakers. A brief flurry of one sided shots around nine minutes feels pitiful – sound design offering dismal realism – and the attempted save comes from behind. Fraying glass shards and impact is bloated, not to mention how enclosed effects are. Separation is dry. Same goes for a gunfight at 36:50; motion only happens from volume.

One explosion will seek assistance from the subwoofer and find it, a nicely deep, jolting rumble to sell the film’s action peak. Much of No One Lives concerns stabbing or slicing death, so room to broaden aural scope is limited by material. Ambiance is null, and dialog, with one exception, fits within the dynamic range.

From the Script to the Crypt is a lonely bonus, although a joy during its half hour run. Detailed explanations for effects, including the creation of a full body cast, are provided with little to no filler. It’s worth a watch.