Godzilla, as a character, represents a psychedelic smorgasbord of entertainment. From his opening stomp through 1950s Tokyo amongst desolate lighting into his cozy comfort food misadventures of the kooky ’60s, Godzilla became entrenched in Japanese iconography. Spawning a son of questionable origin, melting down as his nuclear combustion intestines failed, and battling pollution induced smog monster Hedorah via radioactive breath propelled flight, Godzilla is a creature of infinite faces.

Godzilla is a remarkable summer action picture, in that it is laced with offensive ideas for its stout fan base and plastered with insufferable dialogue. Godzilla would institute a learning curve for blockbusters. A cautious, knowledgeable approach followed with idealistic and smart super hero films, majestic adaptations of modern pop literature, and precise recreations of graphic novels. Roland Emmerich taught us, via failed box office receipts, not to mess with legends.

Godzilla’s appearance, musty and filtered through rapidly fading visual effect intensity, is audacious for its change, certainly idiotic for its disrespect. Godzilla’s fault is not strictly within creature design – Toho would misdirect their own creation themselves often – but in action. America’s ill-fitted interpretation is a clumsy oaf who damages scenic New York vistas out of sheer accident. “GINO” (Godzilla In Name Only) bumbles through 34th street, nicking buildings with his tail. Were cityscapes built for his girth, blocks would be left untouched in this excruciatingly lengthy 138-minute dud.

Pulling away franchise perspective to scour Godzilla for positive attributes finds a languid effort, cannibalizing logic and relying on wholesale thievery in a frustratingly enclosed Madison Square Garden conflict. Godzilla itself – asexual a being as it is – rummages through fish until an untimely end packs up feeble destruction and repetitious miniatures in anticipatory sequel bait. Despite popular beliefs, a sequel did happen, although restricted to Saturday mornings and animated form.

The cartoon did it better. That says it all. 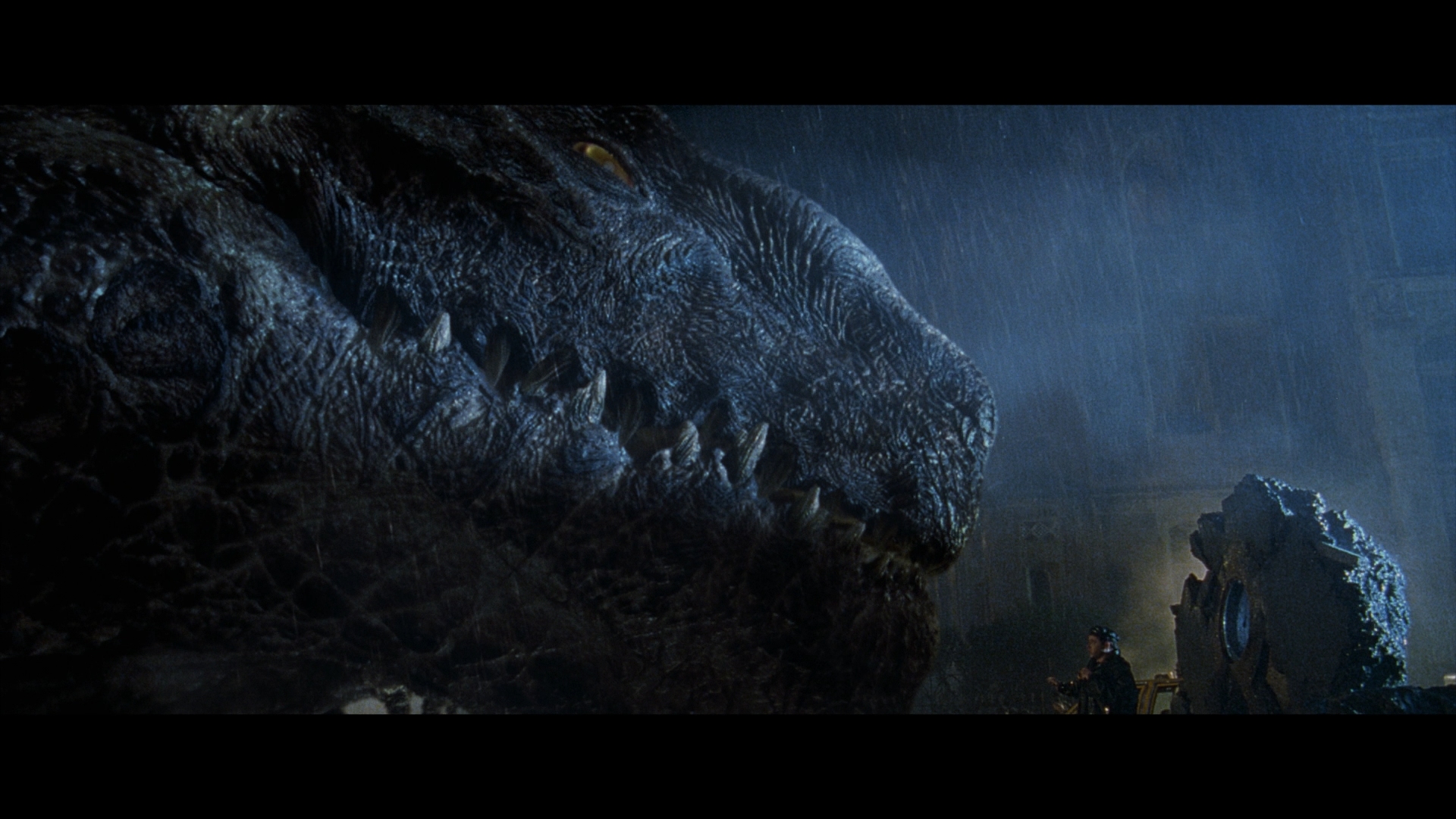 Sony’ revisits Godzilla a fourth time on Region 1 digital disc format (five if you count Laserdisc, six for UMD), this reissue purporting a new 4K master at its heart. Issues are often sourced from two distinct elements: Previously overlapped subtitle shots (print burned in subtitles now oddly removed) and low resolution CGI effects. Dips in visible sharpness find both of those scenarios drastically reduced in definition. They always have been.

To dispatch immediate questions, no, this 4K boost is not worth a purchased upgrade. While Godzilla’s Blu-ray debut was marred by filters and noise reduction, those elements permeate medium shots even in this refreshed master. Cinematography, rain soaked and felled into a trap of nighttime exteriors, is hardly a beacon of fidelity. It never will be. However, digital remnants of transfer’s past are ungainly mixed with upper class encoding.

Film grain locks into place, a sharply rendered glaze that feels naturally visible for the first time on home theater screens. Tinkering does not remove everything. Chosen compression codec AVC has little to concern itself with, falling minimal victim to chroma noise on (rarely) saturated backdrops. Black levels, powerful and dense as shots are often removed from light, clean up further after effects of a Blu-ray transition.

Marketed with a DTS-HD 5.1 mix, this remains reference quality despite an age gap with modern productions. No one would likely argue with a 7.1 sprucing up, yet this monstrous (pun intended) boon to audio systems is wholly sufficient. Superlative rain envelopment drops in during an opening scene at sea as an unseen Godzilla strikes a fishing vessel. Sparks, sirens, panic and score brush together in blissful balance.

Destruction is aided by hearty LFE, Godzilla popping from one of New York’s piers generating weight with his wave. Missiles pass their enormous target, slamming into landmarks with satisfying punch, and a false ending delivered via Madison Square Garden’s explosive death is a pinnacle.

Subtly, not usually associated with Devlin/Emmerich features (certainly not this one) blossoms underground. Tunnels create spacious echo environments, and dousing rains continue to run through every exterior. Helicopters circle and vehicles split stereos. Baby Godzilla’s fill an entire auditorium as they hatch in each speaker.

Godzilla is at its most dynamic in a lengthy chase beginning around 48:30, a quintessential demo on every format to date. It continues a streak of dominance here. Absurdly loud missile launchers, boosted subwoofer activity from footsteps & rotors, bullets passing through channels, and simmering quiet make it flawless demonstration quality.