With proud infatuation for the chainsaw, Evil Dead is reborn under studio system lights where formulaic modern horror can instill its splattering values. Drug addiction spurs expository character development, a distraught Mia (Jane Levy) suffering withdrawal as the illicit Book of the Dead is secured after a grisly discovery spurs curiosity in a rotting cabin’s basement.

Evil Dead rushes to trap its inhabitants, logistically as Mia seeks asylum from recovery, and literally as a freakish downpour strips away a bridge pointed home. Demon entities swirl, infecting with pus-induced soars, blood vomit, and explicit loss of bodily control. Fifty thousand gallons of blood later (no exaggeration), Evil Dead’s reincarnation assures itself, and only itself, as horror iconography.

Evil Dead’s original crux appeal lied in its rebellion, born from sheer will and distraught images of suffering 20-somethings. For its gratuitous depictions of self-mutilation, Evil Dead eschewed an early ’80s system for an underground horror infusion which naturally skipped from studio guide rails.

Production values represent a financial donation to horror elitists, gracing them with spectacular lighting design, make-up work of repulsively luxurious quality, and a climax of such ludicrously bloody scale as to unseat any prior hemoglobin champion. Evil Dead is shouting for attention with each act of explosive body degradation.

And yet, it feels cautious, even artificial. With assistance from contemporary genre behemoths, this remake pops from Tri-Star with increasing choreographed mayhem, paying homage while finding pathways into ensured formula. Thin character development establishes a baseline of slasher movie familiarity, allowing only Jane Levy to flex superior, above pay grade acting muscle. The rest scream, jolt, and twitch for fright, characteristics smashed into executable framework as heroes.

Opening on a soggy forest with sunlit lines, Evil Dead’s immediacy in which it wipes gritty and unkempt attitudes is alarming. Cleanliness of the digital photography pretties up a discouragingly vicious tale of supernatural survival. Material is too perfect, too pristine to host unnervingly grotesque visions of cruelty. Blood doesn’t cover the seams of attempted perfectionism.

In 2013, this reestablishment of grungy horror never comes across as timeless, although timely with a commanding feminine base to build upon. Evil Dead exists for the “now” factor, which does not render it ineffectual so much as it does an assured cash-in. 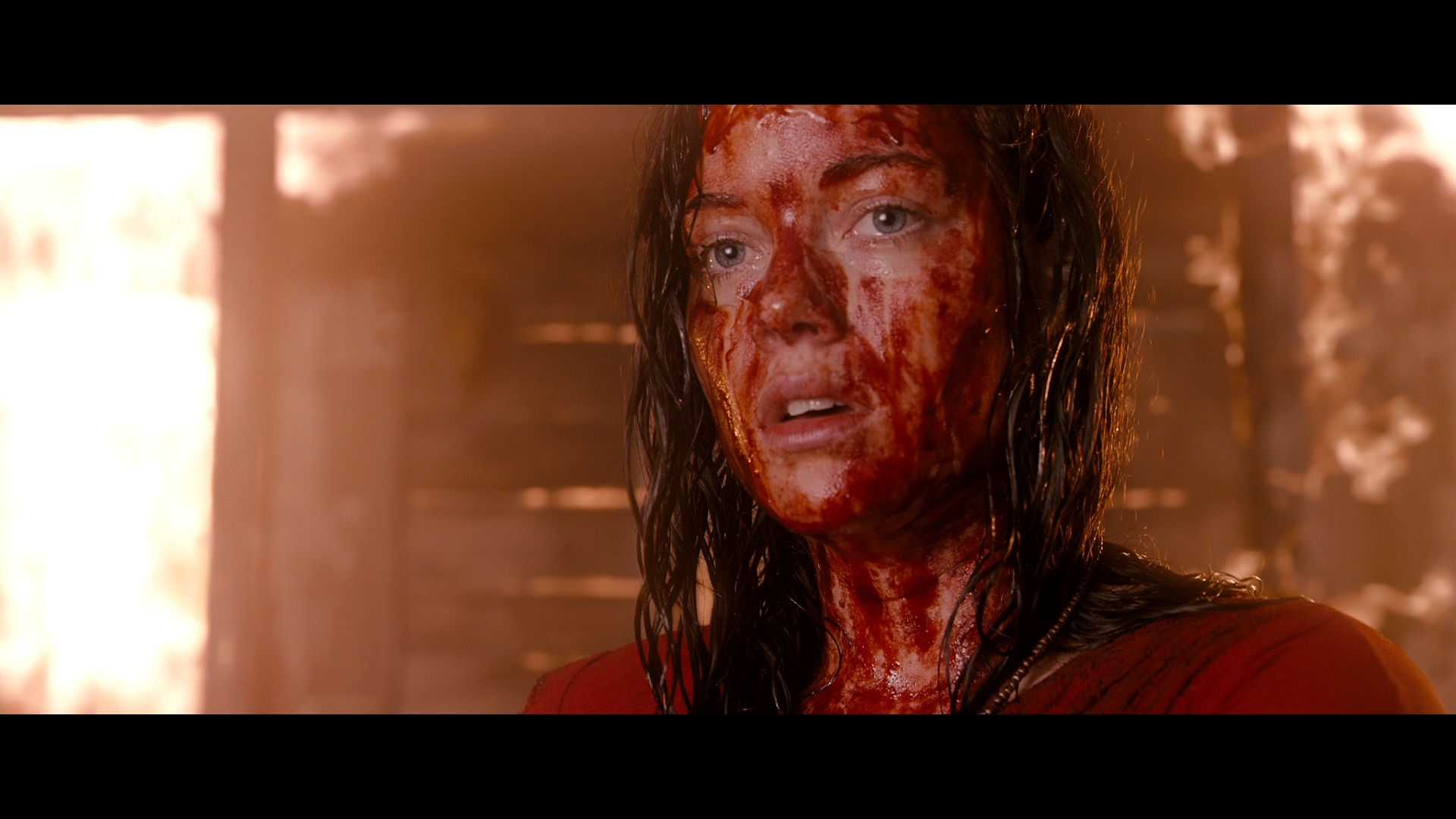 Dropping debate as to whether digital cinematography suits violently gory outbursts, little question is left regarding visual superiority. From its opening strikes of gracious facial detail, Evil Dead splatters not blood, but rather fidelity. Resulting images from Sony’s CineAlta camera line are vivid and dense, sharpened by high resolution photography at the source. With an assiduous AVC encode left to work, intrusions are few.

If you are seeking something to dock this remake/reboot for, banding is a stubborn bother, brought forward by flashlights peering into ridiculously enriching black levels. This disc is a reference base to test personal display’s aptitude regarding depth and shadow detail, likely hiding noise which can slip in under balanced light/dark lighting schemes. Noise is minimal enough to be ignored amidst tension.

Casting a handful of unduly digitally smoothed faces aside allows the piece to thrive on its dimensionality. So much rides on the central darkness after sundown as to make essential consistent performing blacks. Evil Dead never stops being a stunner, and Sony’s stupidly perfect encoding replicates a challenging, soaked third chapter without a visible artifact.

Modernizing does slip in under the idea of color timing, limiting hues while casting a natural air on flesh tones. Some teal is backed by bits of orange, although it is all eventually slathered in brightly crisp red anyway. Exteriors are pale, hardly beacons of nature’s beauty, although conducive to central horror themes.

If one or two elements succeed to bring reference levels to Evil Dead’s visual palette, all elements of this DTS-HD’s masterpiece design imbue the disc with flawlessness. From ambient forests to buzzing flies, running into squirrely traveling voices, there is nothing here to demean.

Evil Dead fits into a horror cycle of spherical envelopment, with slamming doors punctuated by careful positioning. Playfully loud musical cues sit outside confines of proper dynamic range to benefit intensity, and blare without loss of fidelity. This track is built for no other genre.

A slate of attacks include nail gain assaults and direct impact shotgun blasts, all stupendous for their volume of activity. Freaky voices run through each channel, subtle additions smeared into haunting winds. Engulfing flames flare into the LFE, while swelling into surrounds. It’s almost a shame this is locked to 5.1, as ingenuity and aggressiveness are well fit for two additional rears.

Casting a net to reel in commentators, Evil Dead brings actors Jane Levy, Lou Taylor, Jessica Lucas, director Fede Alvarez, and writer Rodo Sayagues together for an active chat. Directing the Dead focuses on challenges behind the lens, in addition to satisfying loyalists. The Reboot assimilates fears from fans, letting Bruce Campbell, producers, and more speak on the how/why/when they chose to feed the project.

Making Life Difficult distributes info on physical actions on set. Unleashing the Evil Force discusses origins of the concept, and why no changes were made. Being Mia follows Levy on set for a day. Featurettes run an average of eight minutes each, coming in at around 42-minutes total. Sony tosses some trailers onto the disc and sends it to market.