42 continues into a hokey and formulaic racial sports film, hinging on the aptitude of Remember the Titans, which ushered in the Hollywood feel good sub-genre. It is a shame, Robinson’s story central to the black athlete, transcending sport into a hideous American divide of ignorant culture. Remember the Titans’ own conflict would never have been possible without Robinson’s dedication and tenacity.

Chadwick Boseman stares down his aggressors in the film’s highlight performance, surrounded by those who make gruff faces in simplification of character. They stand as rightful villains, only portrayed as caricatures, required to bottle a generations worth of naïve dichotomy into a few seconds of hurried screen time. At its worst, 42 uses an embarrassing trickle down racism effect on children, a father spitting words as Robinson takes first base, his directly impressionable son joining on the intolerant frenzy. In those seconds of screen time, 42 rips Robinson’s story from the forefront, choosing instead to nullify actions, proclaiming people are victims of their environment or enablers.

It is enough to be in that place, the swell of modern audio design branching to reach into those stands indirectly, spiraling around Robinson’s contested home plate appearances. 42 implicates one off, post-war archetypes because the successful molding born from these films says it must. Instead of intelligent subtly, 42 shreds the jugular for the thrill of blood. Prejudice is laid to the edges of dramatic parody.

Successes come on the diamond, replication of iconic historical ballparks running into the limits of modern visual effects seamlessly as mind games slip onto the field. Boseman’s projected assurance as he steals home against a frazzled pitcher is genuine, a term of unfortunately limited weight elsewhere.

42 ebbs and flows for inspirational valleys, Robinson threatened by a crotchety senior in Florida to composer Mark Isham’s lyrical dread, welcomed as he takes homestead in Brooklyn to a triumphant swell. When the biopic concludes, America has moved forward on Robinson’s perseverance, rushed through on a slow motion home run montage as if the country’s ills have been cured. 42 never makes Robinson’s historically crucial first season seem easy so much as it does clip it to a headline and act as if xenophobic strife was over when the Dodgers made a pennant run.

It is a shame 42 needs coined a “true story,” as some may be unaware of pervasive, flippant idiocy as America recovered from World War II’s impact. We live at a time when some view James Cameron’s disaster opus Titanic as a form of fiction, baffling, yet true.

Under this climate of historical ineptitude, maybe Hollywood’s gloss and veil act is what society needed when depicting Robinson’s tumultuous rise, if only to drive home a sense of progression as a nation. That driven focus comes at a cost of humanity, wherein Robinson becomes an entertainment placeholder rather than someone carrying burdens. Robinson is a controlled, wise headed family man with fleeting glimpses into his internal battles. That is all 42 determines audiences need to know, and that storytelling methodology constructs Robinson with minimal insight. He is never placed in a situation outside of unrelenting bigotry, framing him as a target and little else. 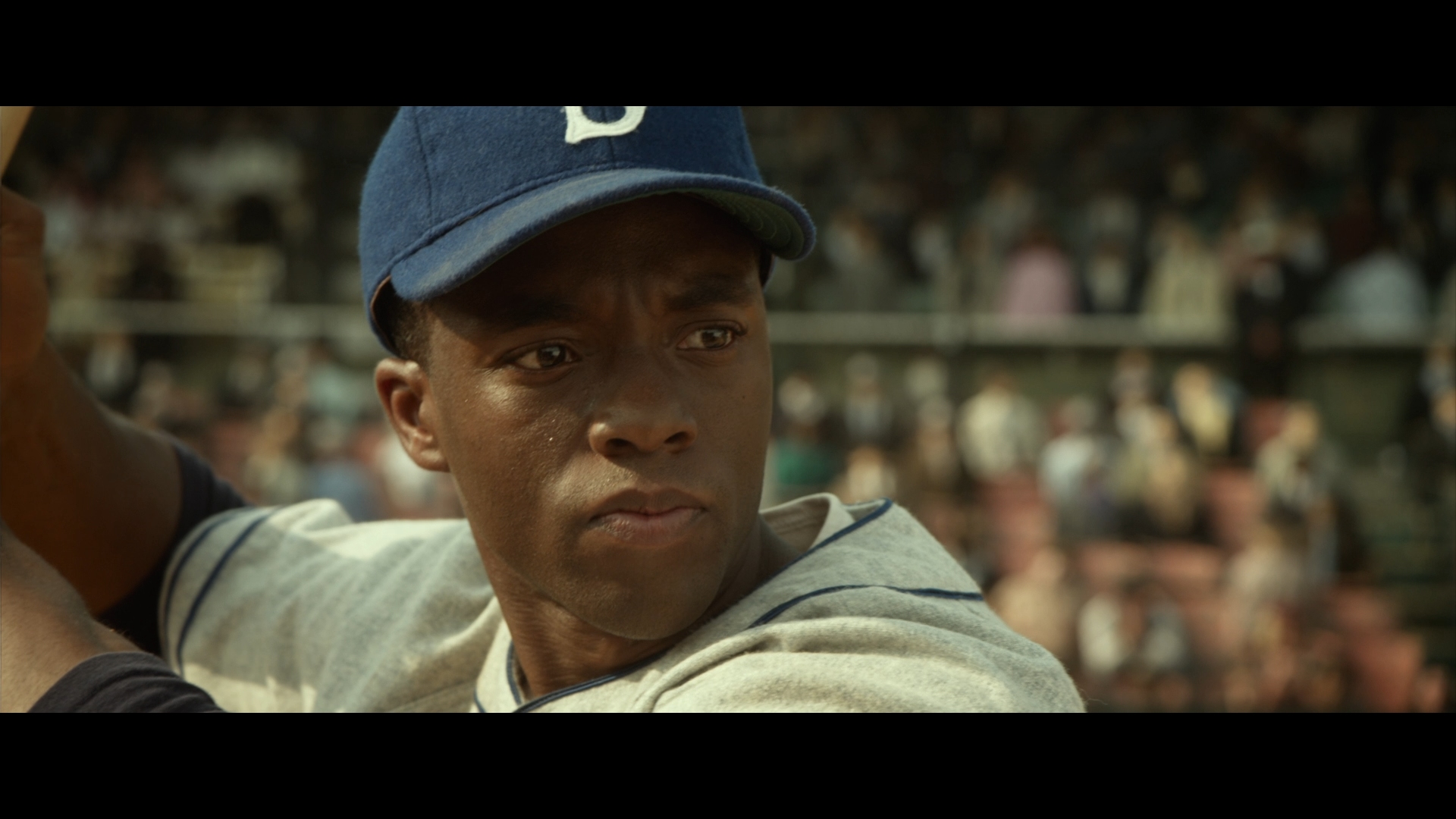 With dashes of era-relevant stock footage serving as an introduction, 42 is ushered into a spotless digital life, cheapening value as a history laden artifact. Drenching the film with a sepia tone in post with a desperate bid for ’40s era solvency, cleanliness dampens authentic spectacle. Red’s Epic camera can display visual fortitude without gleaming the needs of a period picture.

Qualms with digital decisions aside, 42 is pleasingly inviting, the sepia tint enough to warm visuals and sap energy from primaries without harming appeal. Grading adds a slight tinge of orange to America’s game, outfields lacking zest in greenery, while still capping a consistent look.

Jerseys of the era, thick with wool, present complexity the Warner encode is capable of resolving. Any ample concerns over current compression methods are unfounded with 42. Blu-ray plays host to enormous fidelity in close or from afar, replicated stadiums tremendous in resolving loads of ticket holders, and facial definition in tight. Harrison Ford sports facial appliances detailed enough as to be invisible in 1080p, while rich enough to carry levels of fidelity.

Offices densely pack contrast, oftentimes to a point of blowing out detail. Exterior lights are phased in with filters that create a diffusing effect, often aggressive. Some splotchy elements should be the expectation moving forward, although not to an egregious state. Style permeates many shots. Deepened black levels hold during night games or within homes as phone calls ring out during sleeping hours. While not the richest on the format, material holds to be fruitful in calling depth to its aid.

Essential to 42 is sound design, layered around Robinson as he takes the plate, and park goers sling vitriol in a 360 degree soundfield. That placement is effective, more so than narrative, in replicating the hostile atmosphere. “Fans” lambast the future Hall of Famer in differing levels, from those behind home plate to upper decks, and each carries a distinctive level as to create separation.

Ambiance is evident in airports or by train stations. Sound is everywhere, not merely on field scenarios. Trains will catch slightly in the LFE, along with certain elements of the score. 42 is hardly bombastic, but it showy with grand balance and focus.

Nothing is more infuriating within home media than a true story which chooses to ignore said story in bonus features. Cue 42, which weakens Robinson’s impact to a well-produced if puny nine minute featurette titled Legacy of Number 42. Full Control Baseball takes longer to detail the creation of the time period (jerseys, stadiums) than the disc does in paying tribute with any sort of documentary. Stepping Into History, the final bonus, merely corals characters and actors for nine minutes.