Oz can be cheerful, a world of color, playful beings, and harmless scares. Oz can be apocalyptic, barren and flat as its monsters rise to challenge children. Or, it can be Great and Powerful, a digitally oppressive envisioning that blends both for fruitless, tired ambition.

Oz has Disney backing, $200 million to manipulate into a fantasy realm, introduced through the eyes of a smirking womanizer. James Franco is Oz, swept up in a twister that carries him to a bastion of hope for the failed carny. Mistaken identity seizes him upon arrival, believed to be a prophesied wizard who can bring balance to Oz as its structure crumbles. Death of the previous king has spun the land into unseen turmoil. Seriously, everything seems fine.

He is led by Thodora (Mila Kunis), a witch with two sisters. Wizard of Oz sealed this story back in 1939, and yet Oz plays legal lines as to not implicate itself as an infringer of copyright. Surface friendliness turns dire as sisters turn on one another, Oz sent off to a ragged forest with a goal to kill Glinda (Michelle Williams). Plans are not guaranteed to unfold as desired.

Williams is miscast as the bright Glinda, unable to find a level of suitable perkiness to establish a “good girl” dynamic, up against Kunis who is so obsessed with snarling or screaming as to embody her classic former. Evanora (Rachel Weisz) stands around watching things happen, rarely invested in this simple narrative structure.

Wizard of Oz, whether for technological limitations or vision, knew what it had: a fantastical fairy tale of enormous entertainment, brisk and lively. Oz is meandering bulk, so obsessed with what it can do that it becomes over eager to display craftsmanship, not story. Franco spills what he can as a stiff schemer, but is overshot by weight within towering visual effects. Oz is unable to sit still or broaden its structure; there are too many things to showcase. Its existence is fashionably in the now.

Existing as a loosely threaded prequel, Oz travels into craggy mountains, foggy forest floors, and overzealous cities that demean the glamor of what audiences know of this dreamscape. Oz is decrepit and mean, vicious as it jets sniveling baboons towards the lens in dramatically freakish horror escapades. Color grading has given Oz the Technicolor wonder, while fumbling the saturated giddiness that defined a classic.

Oz’s closing memory is a hammy witches duel, filled with electric buzzing, crumbling towers, and fancy audio design, all under the assumption that raucous action or a violent streak will overcome. They don’t, and shrink masterful effects work into blasé pastures that become tired from green screen exposure. Hollywood can create anything, and yet they so rarely have a clue as to what they should do with these anticipatory spectacles. 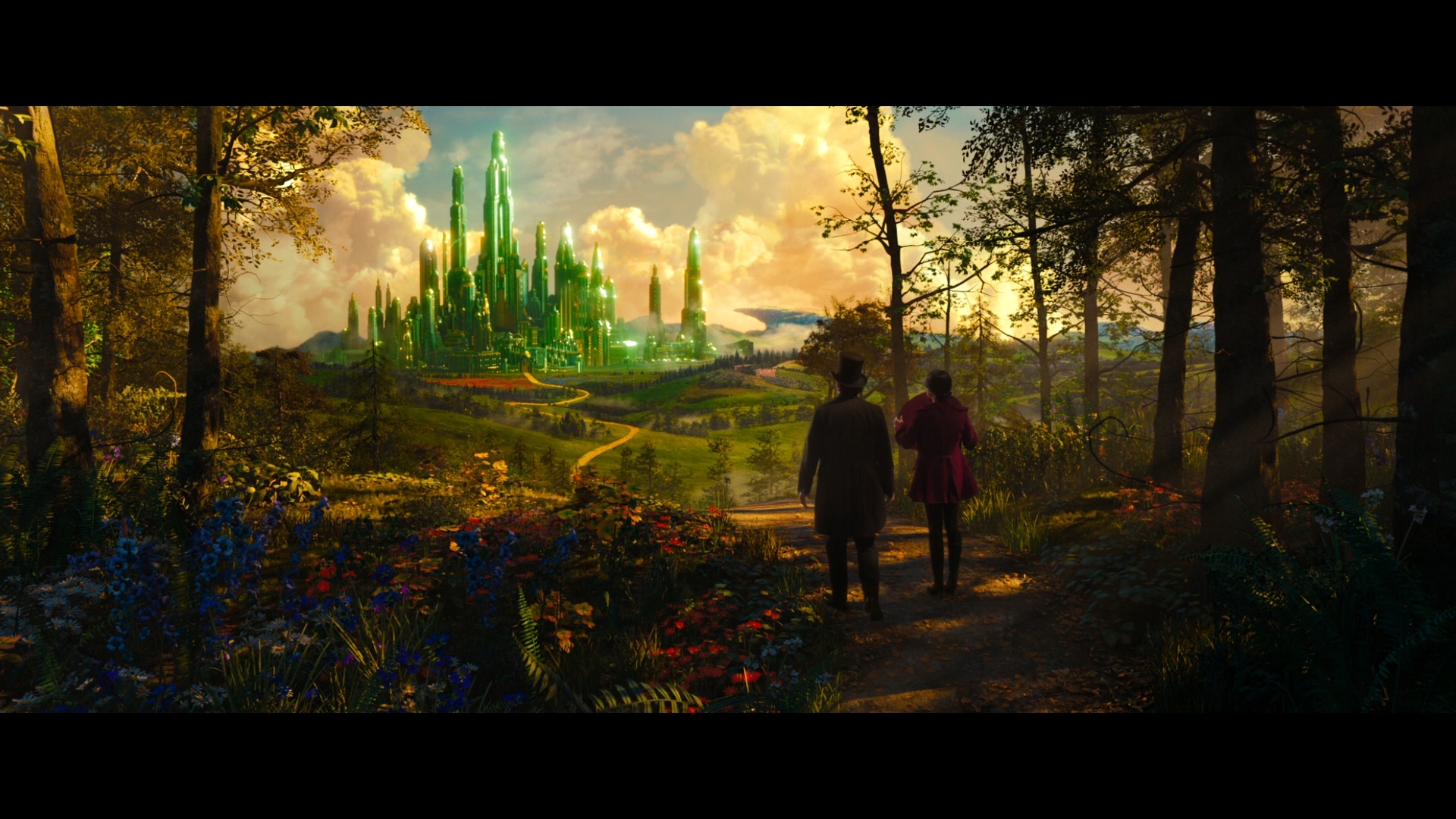 Oz is a majestically magical landscape of purity, so maybe the shock of seeing appalling noise reduction applied to most of the female actors should not be such a bother… but it is. Digital tools do a sweep of fidelity, draining the actresses of appreciable detail. It is dramatic contrast with the resounding sharpness visible elsewhere, superior thanks to visual effects aplenty, that effect drains consistency, instead of adding purity. People look cheaply airbrushed, and “style” is so loosely applied it carries zero logic.

After effects of the smoothing process are carried out in the visual of noise, swarming faces, or slight hints of smearing. The latter is contained extensively in the boxed opening, meant to replicate a 4×3 frame. Instead, it’s stuck in a 2.35:1 frame. It is an effect with purpose, although a failed one.

Oz is clean, captured digitally and avoiding grain, adding an instant artificiality to the opening 20 minutes of black & white footage. Lack of color makes limited banding evident, unseen elsewhere. Eventually, the film opens cinematic eyes into the wonder of this hyper-saturated world. Franco wanders by flowers that bloom, bursting with brilliant primaries that top off potential for zest. Any further and elements would bleed. Greens of Emerald City, the brilliance of yellow brick road, and brightness within costumes adds weight.

Splendor is everywhere within this AVC encode, a ludicrously high bitrate championing visuals that are reference were it not for the technical decisions of the source. What facial detail does peer is meticulous, and the sight of Oz-ians (?) lined into the background is wonderful. Computer generated landscapes feel enormous, and their offerings of plants are superb. Even the digital monkey Finley can display HD prowess, fur resolved down to the last hair. Shame that attention to definition is not equally applied.

Exemplary audio design highlights this masterful DTS-HD 7.1 mix from the outset, a crowded circus scenario bleeding to life in each channel. Into the tornado, the funnel plays with objects, especially a piano, as it thunderously hammers the subwoofer. Technical acuity misses something, from strewn gold in a room of riches to the enjoyable thumps as soldiers march.

Oz is overloaded with power, utilizing the subwoofer to gargantuan success. Strewn magic in a witches’ duel explodes the LFE, any thoughts of holding back quickly satiated. Thedora’s arrival in the city is plastered with raw energy, and a fireworks display? It’s one of the best sounding on the format.

Precision surround use takes note of the added rears, spaciously spreading material to take full advantage of available speakers. Objects pass through the soundfield perfectly. Oz is often loud, but in a way that adds to its spectacle.

Walt Disney and the Road to Oz charts the legendary idea man’s possibilities with regards to Oz, including multiple failed attempts at a feature production. At 10-minutes, it should be fascinating to those not in the know. Journey into Oz is a scattered documentary charting a day on set from Franco’s perspective. At 21-minutes, it is the longest thing here.

China Girl and Suspension of Disbelief shows off some superb puppetry concerning a main character, and Before Your Very Eyes details the look of Oz. Mila’s Metamorphosis is all about practical make-up, followed by a brief blooper reel. Those with Second Screen capabilities can utilize said feature as well. In total – sans Second Screen – there is an hour of bonuses here.