Already there are so-called critics putting Movie 43 down as the worst movie of 2013. While Movie 43 is certainly not a great film, it certainly has its comedic charms and works on some level. A collection of unrelated comedic sketches in the mode of Saturday Night Live, the primary attraction is seeing a star-studded Hollywood cast show up in the most outrageous and crudest skits possible. Think a random pairing of Saturday Night Live’s sketches in which the material is completely uncensored and pushed to the limits of the R-rating. Not all of the skits are funny or even hit the mark, but fans of over-the-top comedy will get a few belly laughs.

The theatrical version of the movie frames the comedy around a desperate, crazed writer played by Dennis Quaid and a Hollywood producer, played by Greg Kinnear. It is a poor vehicle to link the movie’s entire narrative around and its unoriginal jokes hurt the film’s tone, likely playing a small part in the movie’s poor reception. The actual comedic sketches, starring some of Hollywood’s most popular and famous actors, are occasionally very funny if one can quickly forget some of the dumber sketches. There is a pronounced tendency for the outrageous humor to go far past the bounds of decency, including gross physical and sexual comedy.

Without reeling off the entire cast, stars like Richard Gere, Naomi Watts, Kate Winslet, Hugh Jackman, Elizabeth Banks, Kristen Bell, Gerard Butler, Emma Stone and Halle Berry all make substantial appearances. Most of the skits feature more than one major star, though they are usually complemented by actors more known for their work in comedy, such as Anna Faris and Jason Sudeikis. One of the major attractions in Movie 43 is seeing these famous stars work with such perverse and graphic material, which goes far beyond the bounds of anything seen on network television or in their normal movie careers. The skit with Hugh Jackman features a gigantic pair of testicles growing from his chin, as he goes on a blind date with a stunned Kate Winslet. Elizabeth Banks gets completely soaked in cat urine by an animated feline.

Not everything works, in fact some of the skits are not that funny and underwritten at times. Anna Faris mines the depths of scatological humor in her skit featuring a woman hoping to reach a new level of bedroom intimacy with her boyfriend, but its extreme gross-out humor is predictable and stupid. Richard Gere sleepwalks through his role in iBabe, a graphic sketch mocking Steve Jobs and Apple’s iPod line. Terrence Howard’s sketch, featuring an all-black basketball team playing in 1959, makes one joke and keeps repeating it ad nauseam.

The funniest stuff comes from the actors well versed in comedic roles. Justin Long and Jason Sudeikis, as Robin and Batman at a speed dating meeting, are hilarious as they have to deal with other superheroes and villains showing up. Naomi Watts plays a creepy but hilarious turn as a mother trying to give her home-schooled teenager a “normal” high school life. Seann William Scott has to deal with a demented leprechaun.

Movie 43 is certainly no classic and some of the sketches are instantly forgettable, but there is a market for its extreme humor. This is the type of comedy that makes for an excellent rental if you are into the most outrageous comedy possible. 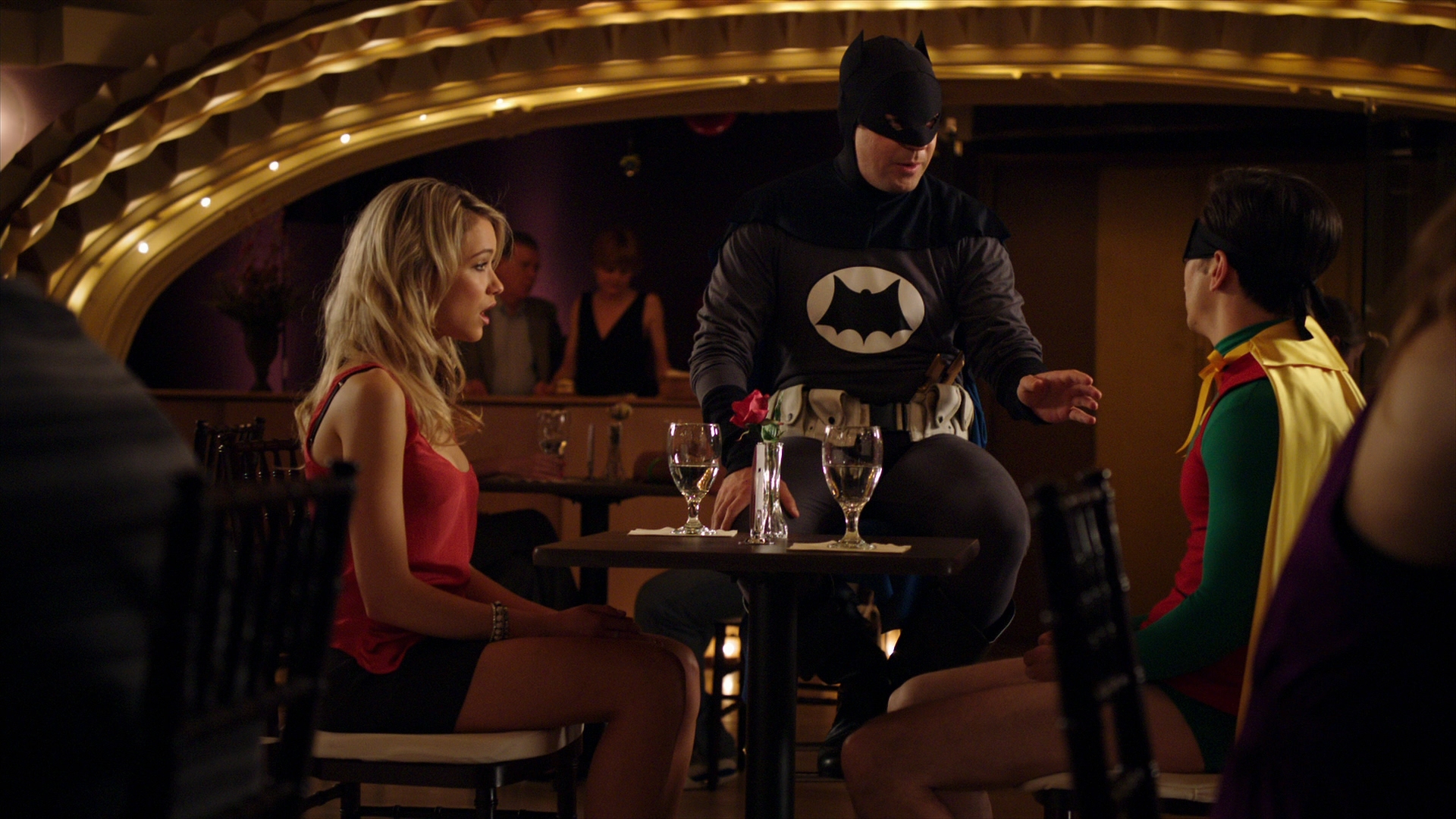 Movie 43’s checkered production history stretches back several years and there are drastic differences in the video quality between some of the sketches. It is very likely that different film crews were required to shoot the various scenes over the years, not to mention the possibility of different cameras. That leads to a finished product which is visually inconsistent at best. It is apparent a semi-consistent look was attempted for each sketch using digital color grading and processing on the Digital Intermediate, but the results are unimpressive.

Mostly shot on quality digital cameras, the video has the appearance of clean but tacky digital shooting. The print is free of major problems with a hot-and-cold contrast and reasonable depth. Various digital tweaks to the finished product produce erratic color grading and differing levels of digital noise reduction. Filtering goes from unobjectionable to terrible at times, such as the entire sketch with Anna Faris has been overtly softened and de-focused. A touch of ringing creeps into the video.

Fox itself has done everything they can to give Movie 43 the best possible presentation on Blu-ray. The two cuts, the longer one running 98 minutes, are included on a BD-50 with few special features. The AVC video encode averages a robust 34 Mbps, which allows the compression to transparently replicate the Digital Intermediate without a single failure or artifact.

The video quality is not poor by any means, modern digital HD cameras have come a long way and their typical strengths of clarity and sharpness save Movie 43 from being a completely ugly film. This type of quickly-shot sketch comedy does not lend itself to beautiful picture quality. The inconsistent nature of each sketch’s cinematography and some of the poor grading choices bring the overall score down. Exterior shots end up looking pristine, particularly in the sunny settings, but interiors fall flat with mild black crush and orange-colored flesh-tones.

Movie 43’s audio is served up in a perfectly acceptable 5.1 DTS-HD MA soundtrack. Like most comedies, there is little surround activity and the LFE channel only becomes engaged to support musical passages. Dialogue is clear and intelligible through the center channel, though the production differences between each comedic sketch bring to light varying changes in quality. Music is spread over all channels, though there is very limited directionality to the sound design.

Optional English SDH and Spanish subtitles are provided as choices in the menu. Both show up in a white font.

Aside from the alternate, unrated cut of the film as an option, Fox has included a paltry selection of special features. One wonders why the Julianne Moore sketch was deleted in the first place, it fits right in with the rest of the movie’s comedy. I have to warn people away from watching the alternate cut, the change in framing device from the theatrical cut simply does not work and will drive viewers to frustration in how laughably atrocious it becomes. I recommend totally skipping the alternate cut. Fox has provided an iTunes digital copy in the set alongside a DVD. A slipcover will be available in first pressings.

Find Our Daughter (04:45 in 1080P) – Inexplicably cut from the movie, this brief sketch starring Julianne Moore and Tony Shalhoub as two parents looking for their missing daughter is mildly funny. It only works due to the uncensored, no-holds-barred nature of its R-rated material.