Cognizant thoughts bounce around inside R’s near-petrified head. He brings Warm Bodies to an unsteady life. He’s undead, dragging his feet, scuffing the airport floor, while making daily rounds in search of food – namely, people. Or, their brains to be specific.

The world is on full apocalyptic alert. An infectious strain, rabid monkeys, or bad seafood cursed humanity with undead… ness. R either doesn’t know of or remember the cataclysm that afflicted Earth. Survivors, as they tend to do in these movies, band together in walled off camps seeking refuge, the young sent on missions for supplies.

R, being particularity swift in corpse-hood, drops in on a group of potential victims. His friends suck out brain matter; R becomes infatuated with Julie (Teresa Palmer). This innocent quest for pharmaceuticals is about to blossom into unorthodox romance.

All relationships have secrets; R for instance ate Julie’s boyfriend. No one is perfect. Terrified and covered in something sticky, brown, and rotting to hide her living odor, Julie is led away from the feeding frenzy where R takes to her “lively” qualities. It’s here the story, based on Isaac Marion’s novel, shifts.

Warm Bodies moves where its oppressive, obvious foreshadowing is leading, plopped onto a pathway so tired as to be passe. The inventiveness of the idea crumbles when Warm Bodies passes on taking a curve in the Hollywood romantic structure. Part of that is the joke: Treat the situation with normalcy or indifference and absurdity becomes easier to digest. Warm Bodies is dying (no pun intended) to seek freedom, become humorously uncomfortable, but that’s never allowed. PG-13 strands this one.

Warm Bodies is too self-aware to stop being wholly entertaining, merely disappointing. Exposition drops are smartly delivered via midnight zombie snacking sessions, and the absorbing weirdness of this Romeo & Juliet fantasy kooky enough to earn originality points. For its life-fulfilling, prophetic set-up, Warm Bodies appears to be targeting something unexpected. Instead, it limps into predictability with a smartly acute romantic comedy frame, while zapping the zombie genre with a refreshing shred of upended happiness. Conflicts (two of them) are flatly satisfied in a rushed closing chapter that renders threats of otherworldly danger positively quaint.

Marion’s novel (and this Johnathan Levine screenplay) is conceptually powerful, more than Twilight with zombies, but cautious as to not disrupt normalcy once past the rush of impulsiveness. Reluctance to break into spiraling comedy or romantic deviations put Warm Bodies at an (enjoyable) stand still. Yet, the something here is that empathy and caring tear down the walls separating us. Corny, but done with pizazz. 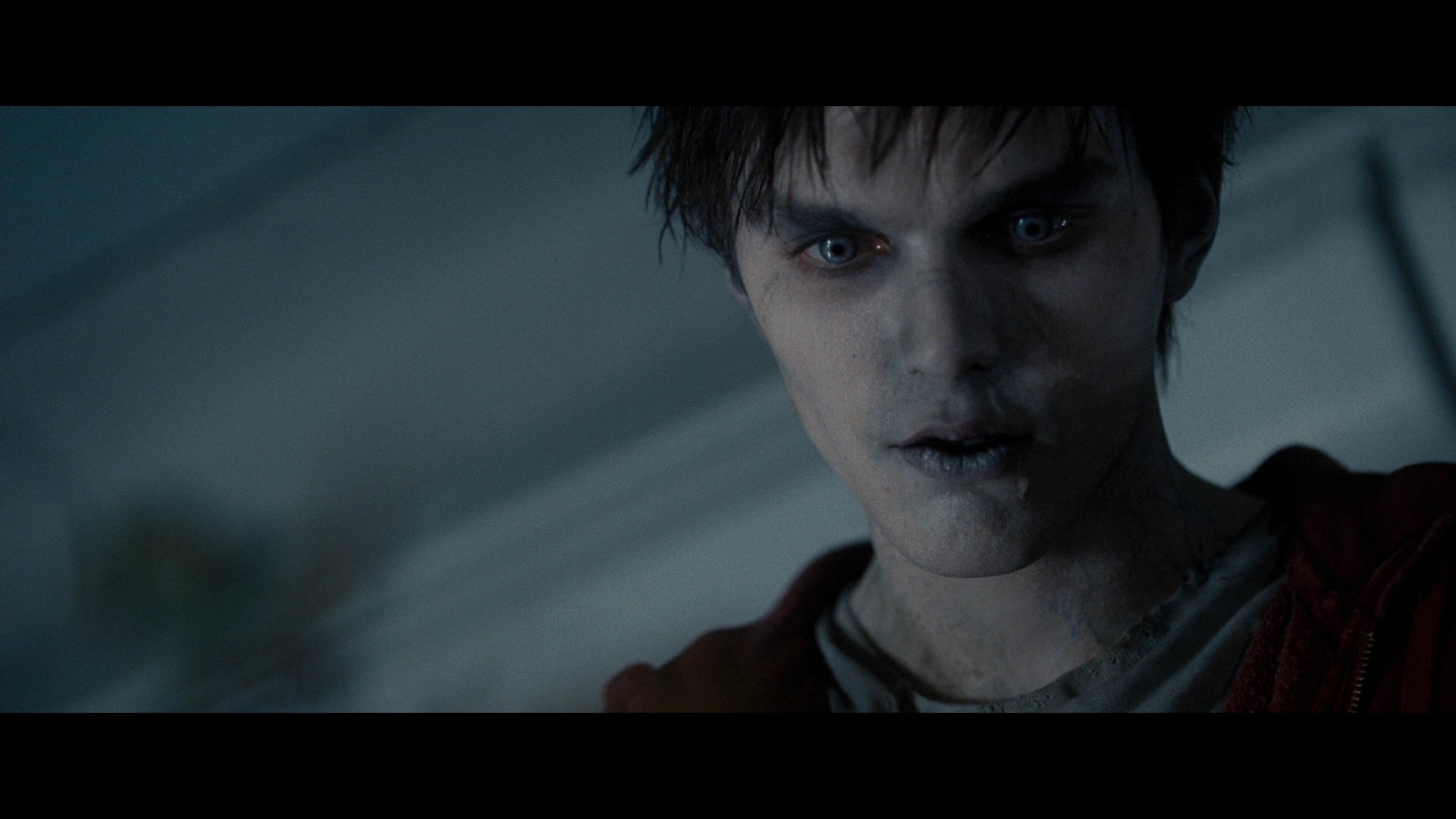 The Dolby Vision pass given to Warm Bodies shows the importance of this tech, specifically the way Dolby Vision/HDR treats color on a movie like this. Sweeping around in the early going, the oppressive blues look more natural than on Blu-ray. Zombie skin tones travel from pale to fleshy as the plot moves ahead, and color depth makes this shift prominent. Flashbacks and dreams push substantial warmth, creating the needed dichotomy between these two styles.

Black levels matter too. A scene in the bedroom at night reaches wonderful depth, adding to the shadows. While contrast spends part of Warm Bodies muted, the rest brings out intensity, assisted by the HDR pass. The prominence of sunlight casts a glow.

From a 2K, film-based source, encoding handles a clean structure. While a few effects shots send out noise, those quick instances barely matter in the overall quality of the image. Rich texture and facial detail remain consistent throughout. Close-ups show off the zombie make-up, and humans too. Some exteriors shimmer slightly when in motion, but another small consequence.

Warm Bodies travels the visual spectrum. Opening on R in the devastated remains of an airport, color is removed, flesh tones appropriately dulled. As story marches in, cracks of saturation sprout to life. Digital color grading is central to the story as a whole, making the eventual blitz of warm primaries before the credits a jarringly gorgeous surprise.

Of concern is Summit’s encode, charting high on bitrate spot checks, while alarmingly disruptive in its handling of grain structure.  Film stock appears noisy and unkempt, even visibly smearing during subtle motion. Instances of smoke or fog crumple the imagery. Inconsistency is the unfortunate take-away of the disc, which is otherwise capable of well defined frames.

In close, the disc will prop up fidelity, growing in intensity as the features moves on. Spotty application of computer generated environments and the ungainly “Bonies” stand out with the afforded resolution, a sign of this disc running at prime condition. There is a consistent sense of fine detail, even if application is spotty.

Black levels are unremarkable yet wholly serviceable, a tick away from perfection that draws them close enough to produce needed dimensionality. Contrast, like color, is in the grip of the story. Cloudy skies turn to sunny days as things grow, sparking brightness to life with the intended look. Warm Bodies is a pleaser, if not always premiere work.

Powered with Dolby Atmos (DTS-HD 7.1 on Blu-ray), the audio mix never works overtime (the additional rears are largely forgotten), yet plants a sufficient sound stage into the speakers. Bullets rip through the stereos and swing into the surrounds to mirror shifting cameras. Chase scenes utilize creepy moans to pull in atmosphere.

Prominent is a selection of music, played with clarity and affection as R enjoys his tunes from the days of analog. Here, they’re treated with care, bright lyics and split instrumentation. LFE is also active, hitting lows as zombies pound on windows to great effect. Action is otherwise missing this crucial component, or so blasé as to be ignored.

Bolstered by bonus features, Summit’s disc introduces a slate of extras, although these should have been bundled into a multi-chapter documentary. Before reaching that level, director Johnathan Levine joins his two stars, Nicholas Holt & Teresa Palmer, in a commentary. Holt continues speaking (optionally) over nine deleted scenes elsewhere in the menus.

Whimiscal Sweetie takes clips from Teresa Pamer’s video diary, while Rod Corddry dishes zombie acting tips in another blip feature. Summit tacks on a gag reel and a trailer before calling it quits.

The following six screen shots serve as samples for our Patreon-exclusive set of 40 full 4K screen shots grabbed directly from the UHD:

The 15 unaltered images below represent the Blu-ray. For an additional screenshots, early access to all screens (plus the 20,000+ already in our library), 75+ exclusive 4K UHD reviews, and more, support us on Patreon.