Thinly wrapping a tale of murder around the story arc to push Chon Wang (Jackie Chan) and Roy O’Bannon (Owen Wilson) into jolly old London, the pairing follows the same lackadaisical thematic flow for an excuse to punch people. When they’re as energetic in their rumbles as Shanghai Knights, it’s easy to forgive the rest.

Chan choreographs a triumph of his craft, a pleasing mixture of rough and tumble martial arts, balanced with a homage to Hollywood musicals. Grabbing a small collection of umbrellas, Chan whips them around, hooks villains, pokes them, prods them, and floats effortlessly from a cart of boxes, a perfect hosting stage for his charmingly kooky fights.

New York plays host to a humbling brawl with local law inside of a revolving door, editing superlative as to elevate the scene without a hitch. Another has a sliding library ladder and priceless antiquities that is so enormously brilliant, you cannot miss a second of the sliding pottery battle. All of it comes to a head with an equal level martial artist in Donnie Yen, a first time on-screen meeting with Chan that, after all other mayhem, feels quaint by comparison.

Martial arts talk is necessary to hide the painfully forced inner workings of the London setting. Knights aims broad, winking at the camera with outrageously tired British dental gags, Jack the Ripper reference, hardly sly jibs at Sherlock Holmes, and a stupidly wasteful encounter with a Royal Guard because… well, London. Americans are clueless if Hollywood screenwriters are to be believed.

Change in setting places both Roy and Chon out of their element, a recasting of sorts that is forced to reach for numbskull tourist gags while relying on crucial landmarks for identification. Embarrassing ADR is used to place the characters in front of Buckingham Palace, a clear last-minute addition to ensure the US audience would understand.

Lucy Liu is lost, replaced with Chong’s, “He had a sister?” Chon Lin (Fann Wong), a capable kicker who had no prior martial arts training before the shoot. Her ballet background is generous enough to take on the hordes of a British politician looking to usurp the throne. Meanwhile, Wu Chow (Yen) works the deal to take over the highest Chinese political seat, offering the identical East meets West scenario of Shanghai Noon.

The only quirk is a small child, Charlie Chaplin (yes, that Chaplin, played by Aaron Taylor-Johnson), a orphaned scrounger who is little more than a thieving plot propellant. Knights is stuffed with contrived meetings to shuffle the characters around, a MacGuffin in the form of a Chinese heirloom enough to make the whole thing loosely thread itself together.

Knights is bound and determined to entertain, and in the end, plays it ridiculously safe. We close on Owen Wilson hanging precariously from Big Ben, as if the audience would be too unfamiliar with other landmarks. A dopey leap of faith later, we have a finish, albeit an enjoyable one as its preceded by a dazzling swordplay showcase. That is how Knights works, eliciting as many groans as action infused laughs, and somehow coming away an underdog winner. 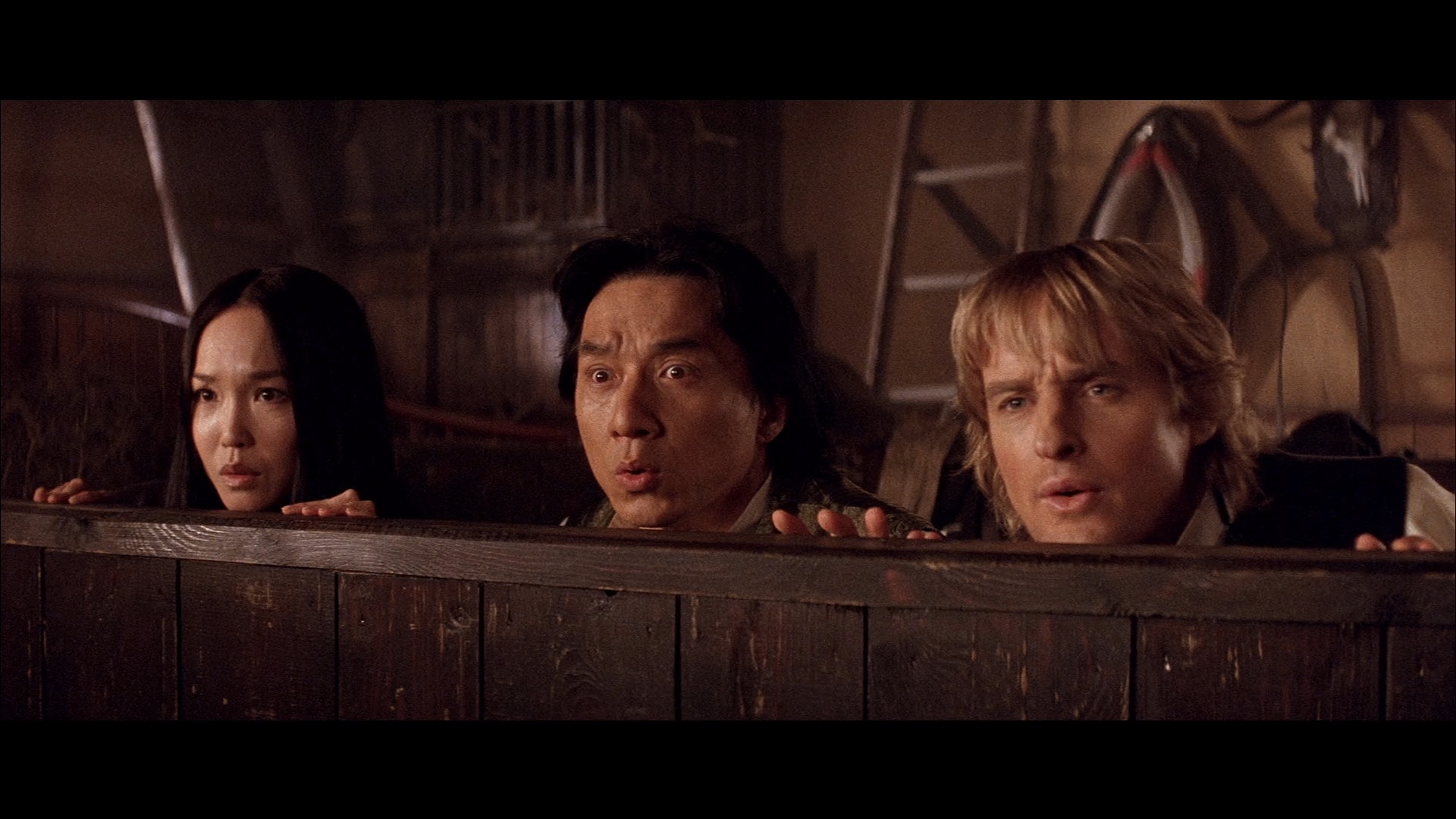 Disney plops the sequel onto the same disc as its predecessor and the result image is bothersome. Knights has plentiful definition, so do not take that the wrong way. Close-ups fill the screen with heightened fidelity, and sharpness is rarely in question. Picking up on costume fine detail shows their Hollywood extravagance.

Knights has a vintage feel, and that is nothing against the encode. Incoming scene wipes introduce a faded, dimmer quality. Anamorphic lenses sour the overall image with fuzzy edges inherent to the style. In many ways, it’s appreciated as a simpler throwback, genuine and proud of the vintage heritage. It also works in tandem with the late 1800s time frame.

All of that considered, a level of sharpening is visible from the opening text. Edges are overly defined on the credits, and into the film, halos will sprout up where possible. The problem will not cease unless the dominating black levels can cover up the offending edges. Complications of edge enhancement include raised grain the compact encode is unable to resolve, an early troublemaker that becomes worse as the shift to foggy London takes place.

Color is also rough, blown out along with a bleaching level of contrast. Red hues during the opening scenes are bleeding from their seams, and light sources, midday sun or otherwise, wipe out portions of the image. Some level of image brightening seems to have been applied. Unlike Shanghai Noon, Knights is not as fidelity-rich to counteract the rather hazy, dated appearance of this flustered master.

Disney scrunches the audio onto the disc with a meager Dolby Digital codec, taking already bland audio mix and furthering removing its power. Forget the low-end as it never registers, even with a boisterous fireworks display that coincides with the finale. Even inside a burning barn, the flames rise up visually without suitable audio accompaniment.

Surrounds will peter out, barely notable as they capture an occasional spark from the fire. A sword clash inside Big Ben is energetically split across the front soundstage, the ambiance of the clock’s interior lost, if it were ever there in the first place. Little aside from the improved Randy Edelman score is ever reaching for those surrounds. It’s a boring mix made all the more so without the added burst of energy from uncompressed audio.

Two commentaries are offered here, director David Dobkin up on the first, screenwriters Alfred Gough & Miles Miller on the follow-up. Fight Manual is a nine minute look into Chan’s approach to fight scenes, Dobkin in on the conversation as well. His attitude towards the fights is interesting to hear, a man in tune with his work. Eleven deleted scenes include extensions of almost every fight in the movie (except the umbrella and door brawls), and a mash-up of action scenes is passed through a silent movie filter to give them a vibe of the era.