Formula for Jackie Chan’s success in America – after decades of attempted breathroughs – was solidified by 2000: Buddy comedy and fish out of water storytelling. Chris Tucker’s ample, abrasive dialogue in Rush Hour catapulted Chan to named status in the States, and a pairing with Owen Wilson would keep martial arts antics in the public eye.

Shanghai Noon is a rather leveled effort, trucking into the western genre with train robbing gangs, drunken bar brawls, showdowns, and horse tricks other entries in a post-2000 film world would be embarrassed to use. It is glamorized, cinematic early west, where the best men for a job are the crooks and the best right hook comes from a racially profiled immigrant out to rescue a princess. Somewhere in there fits gold and wanted posters because… because, that’s why.

Chan flips kicks the piece to success, towering over the hackneyed familiarity of the cliche-riddled script with wildly kooky fight scenes, coupled with a director who understands the visuals and talent. Watching Chan whip a rope tied to a horseshoe around his body in a handful of swings only works without edits. Shanghai Noon plants its camera effectively, letting choreography gel before taking on a new angle. Energized brawling caps the culmination, a rough and tumble battle with bo staffs that counter-acts the comedic driven gunplay of Western combatants.

Owen Wilson leads the charge, a softer gunmen with weak sharpshooting talents, but genuine words that pull him away from danger. Wilson stands around spouting off one liners while Chan handles the heavy work, Wilson becoming a secondary character that fizzles under the guise of his familiar role, a leading man dropped to sidekick to fight his own battles with a dry villain.

Shanghai Noon is bursting with ideas, forced to develop dueling evildoers, Chinese traditions, cliched Native American tribes, and often wasted action as Chan tries to find his way across this unfamiliar land. Carson City is derived from any number of film sets over the years, stock set work all for show, and action central to enjoyment anyway. Placement is an excuse for Chan to kick people in the face and perform physical humor; place the consummate performer in the year 2192 instead of 1892 and you’ll see the same result.

Thirteen years on, the film remains effortless and yet wholly harmless fun. It’s all fat and sugar, but the type you need once in a while to scratch an action hunger. Shanghai Noon is oblivious to its lack of intangibles – including an abhorrently generic score from otherwise capable Randy Edelman – sold entirely on its casting and substantial enough budget to retain the pairing. Let it be and bask in its stupidity while admiring a man willing to sacrifice personal health for daring fight choreography. 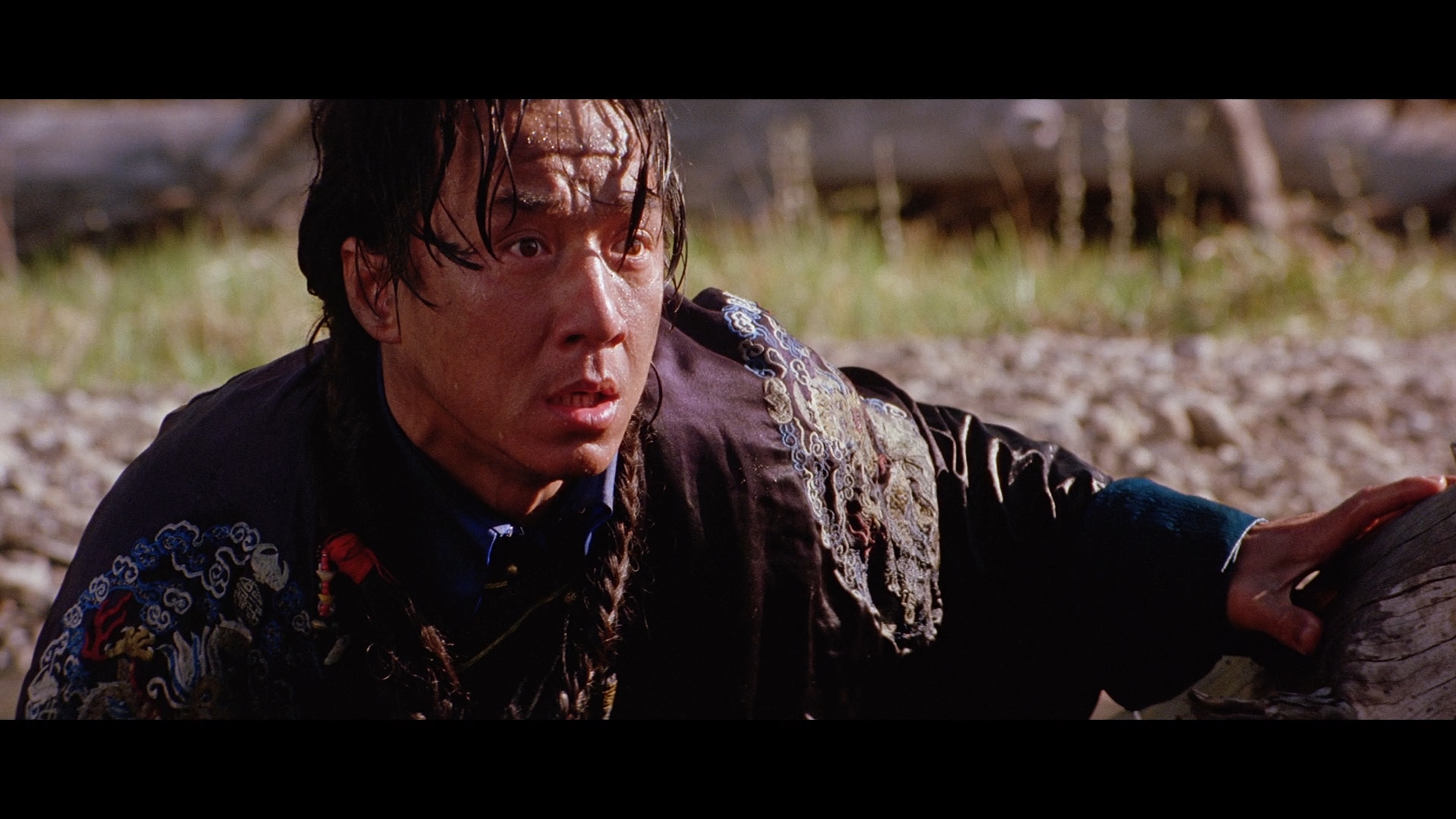 Disney slaps Shanghai Noon together with its sequel on a single Blu-ray, capping the AVC encode that will, at times, struggle to play nice. Grain structure can run over the images, caused by bloated compression that makes the source material too obvious. On the positive side, the print remains in pristine condition. One single speck is the only noticeable flaw, and if you’re observant enough to bothered by said imperfection for one frame, you might be a Blu-ray critic.

Of deeper concern is the boosted color, washing over the frame with aggression, blasting the flesh tones with unnatural oranges, and blowing out additional primaries. This is DVD-level tinkering, trying to flush the image in an attempt to hide what appears to be an older master. Resolution is a little flaccid, particularly in medium shots. Fuzzy faces at a distance are unusually common for a piece with so little age, and genuinely sharp photography elsewhere.

It is fidelity that will inevitably rescue the piece in HD, generous helpings of facial detail proving remarkably consistent, and most of the cinematography clamps down in close. Suddenly, those softer medium shots seem moot. All of the main cast have their moment in front of the lens in tight, proving to be a showcase to Blu-ray no matter the questionable age of the master.

Maybe everything is helped by the slightest remnants of sharpening, invisible in close, only assumed to be there on certain edges. That would explain the sometimes sticky grain structure. Despite a vivid contrast, black levels are gorgeous enough to hide anything suspect for most of the film, keeping night sequences dense. Shots of the slave clamp, doused in blue whether day or night, are purposefully dark. The disc can hold to that intended look.

Wondering how they fit two movies nearing two hours and all of their bonus features on a single disc? By skimping on audio, that’s how. Compression is still here in 2013, Noon’s quality battered by DVD level Dolby Digital straight from the year 2000. When your ears have adjusted to the sonic quality of uncompressed formats, taking a leap backward is difficult.

Music is flattened, dialogue is hollow, and the low-end never becomes aggressive enough to be of any consequence. Tracking is fine, the design sharp enough to split fronts a bit and capture the barrage of gunfire where needed in the surrounds. Fight scenes will wrap around to land punches outside of the center too, a little dated in terms of overall placement, but still satisfactory.

Nothing can recoup the loss due to the aged format though, the deadened low-end as dynamite explodes and the lack of power from a small stampede (and subsequent wall collapse) all flustering to the audio veteran. Maybe giving the films their own individual discs would have been the best choice.