Comedy makes the paranormal escapades of four parapsychologists wholly acceptable, a dash of whiz bang visual effects no less of a helping hand. Ghostbusters is comfortable in its own skin, with a dash of shared skepticism as the realization of physical manifestations are blasted onto the screen. The business, that of ensnaring ghosts in glowing particle beams to forever lock them down in a containment facility, is crafted with the full creative juices of Hollywood’s brightest.

This marriage of film and music media, including a snappy and addictive Ray Parker Jr. pop hit, pushes forward with utter enthusiasm. Ghostbusters’ dashes of subtlety make it infinitely rewatchable, hitting theatrical screens at a time when home video capabilities were spreading into homes. A VHS copy of this summer splash was a necessity in 1984.

What is the hook? An outrageously filling experience that cascades across the screen effortlessly and intelligently. A mixture of personalities – so ingenious as to be cloned by Ninja Turtles – plops divergent approaches into bewildering scenarios that are lean, never fattening. Audiences leave modern blockbusters empty, the mess of explosions and CG losing itself in bloated narrative extremes.

Ghostbusters is calculated and cautious, endearing because it takes its time, filling gaps in beam-spewing ghost hunts with sexually charged dialogue that adds those inherently adult overtones. You can embrace your child-like wonder, and giggle as Peter Venkman (Bill Murray) bemoans the lack of action in his client’s bedroom.

Splendidly structured with an air of ignorance towards inventive technology, the initial trio of stumbling, would-be business men burst through the doors of the Sedgewick Hotel with no clue or proper testing before them. That mystifying secrecy of the frantically blinking proton pack is a shared quality with the audience. Egon (Harold Ramis) and Venkman are panicked as the backpacks are switched on, Ray’s (Dan Aykroyd) leadership and assured attitude oblivious to the danger of an unlicensed nuclear accelerator set to discharge as they run down a portly specter.

Character establishment is brilliant, critical too, leading to a frenzied finale with a personal and New York connection. Dialogue expels illogical exposition, building instead on a foundation of fancy light shows, stop motion animation, and plate work that lend legitimacy to the existence of poltergeists. Growth builds the crew from dangerously careless to adroit leaders against a rebellion of the spiritual. The shift is natural, coming from scripting perfection that makes Ghostbusters one of the finest, sharpest pieces of escapist entertainment ever committed to film. 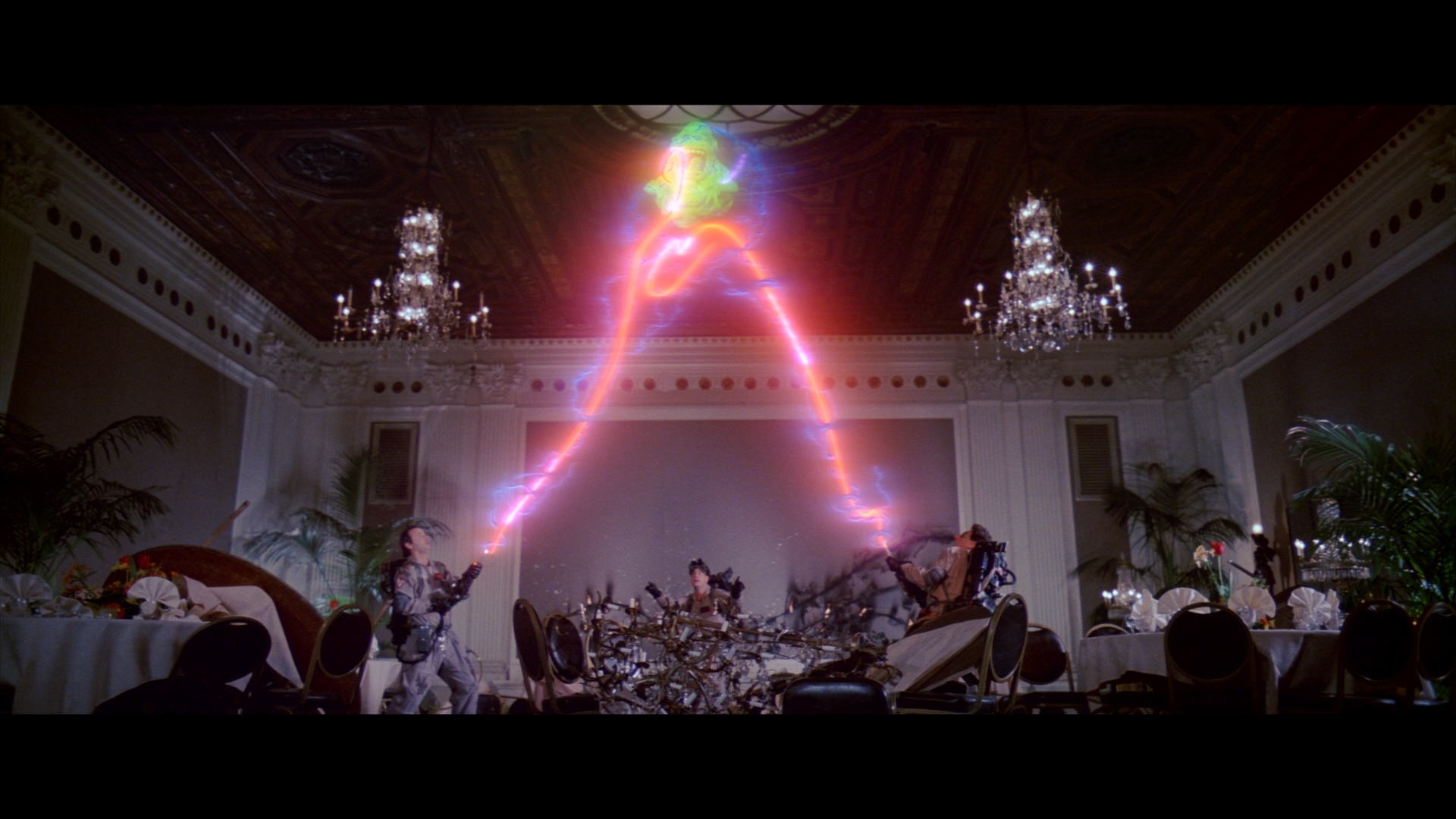 Sony’s 4K line of Blu-rays debuts now, Ghostbusters landing in the initial batch of restored discs. This remaster and re-encode pumps up the bitrate to over 30 Mbps, more than capable at rendering a staunch grain structure. This is a dual effort though, a combination of better technology, higher resolution, and less reliance on image brightening. The latter is absolutely essential.

Gone is the haze of artifacting within the previous “should be black” levels. This 4K edition drops the blacks down at the expense of some shadow detail, while hiding the coarse digital nature that resided within them. Better still is the contrast, refined as to not blow out into extremes, a critical misstep of the original 2009 Ghostbusters Blu-ray. Closing on the Zuul/Gozer assault, the gradients in the fog are well defined, no banding and no splotchy patches of bleached whites. Faces are properly contoured – still bright to capture the blinding nature of the imposing doorway – and exhibit previously lost fidelity.

This is an upgrade for a die-hard fan and videophile. Less discerning viewers will still pick at the film stock for its grainy nature without being able to discern how well managed it is. These confusingly labeled 4K editions have an audience, but it is slimmer than the hyped 2009 disc. Familiarity with the source and previous editions proves how wonderful this looks, close-ups better refined with sharpness peaking to the maximum for this format generation.

Sony has left well enough alone, some minimal tweaks to color timing not withstanding. Nothing will likely be found offensive, the color scheme mostly dirty with spot on flesh tones and brazenly brilliant glows from the proton beams. As before, the print exhibits no damage, visual effect shots or otherwise. Ghostbusters can be applauded from its 4K-enthused audience, but an upgrade from the perspective of a casual observer is more from the standpoint of a collecting fetish.

Update, 9/16/14: Sony has repackaged this disc with a different encode inside of a double pack with Ghostbusters II. Because this new release contains a slew of extras, compression parameters have been tightened by about 10Mbps. The loss? Not much. Side-by-side, the two AVC encodes appear nearly identical. Those with larger screens (60″ and up) may note some added blocking on the grain structure, but it’s limited. Without knowing this was a new encode, telling the difference would be a hobby of only the hardest of hardcore videophiles. A re-review or score change is unnecessary.

Sony mirrors the TrueHD 5.1 mix from 2009, more than adequate to handle the bulk of the work. Unlike the video, advancing audio technology would be unlikely to squeeze any additional spacing from the material. As it sits, this workable presentation has plentiful passion, rocketing the subwoofer to life for the spectacle of the Ecto-1’s finished facade, the roar of the Terror Dogs, a stomping Stay Puft, or the doors of Zuul opening. LFE activity is vibrant and deep without sounding artificial.

Elmer Bernstein’s score and the other pop-infused tracks split wide into the stereos with seeping into the rears where necessitated. Music is spacious and lively, capturing the energy of the film itself. Proton beams zip from one speaker to the next, panning overhead as need be. Slimer’s energetic passes towards the camera are splendid, particularly as he slams into Venkman which happens directly at the lens.

Dialogue will, on occasion, lose its brightness, Egon’s speech about the danger of crossing the streams inside the banquet hall losing some of its pop. That is more of an outlier than the rest, which mixes elements with ease, all on equal level of fidelity.

Sony chops extras from the disc in the interest of high bitrates, although there is plenty of space left on the disc, at least 15GB, which seems plentiful for a handful of bonuses despite what marketing may say.

Update: Sony’s re-release and repackaging on September 16th, 2014 means the 4K master is now bundled with bonuses. This includes all of the original DVD/Blu-ray features – commentary, retro featurette, Ecto retrospective, more – plus new offerings. Who You Gonna Call is a splendid look back at the film and explores what made it so successful and comes across as well packaged. A separate sit down interview with director Ivan Reitman and Dan Aykroyd is arguably more interesting as the delve into the history of the feature from its earliest moments through to completion and the fan base which would follow. Ray Parker Jr.’s music video is here, plus a slew of great galleries to pursue. This is the definitive disc version of Ghostbusters to date.

Note: You can use screens from the first Ghostbusters Blu-ray for comparison.