Robert Redford stars in Brubaker, a movie attempting to shine a light on the corruption in the Arkansas State penitentiary system. Based on the true story of Tom Murton, it was the type of socially-conscious movie Redford began to favor as his movie career developed over the years. Obviously intended as OSCAR bait upon its release in 1980, the gritty realism of prison life in that era’s deep South feels far removed from today’s reality. Brubaker is more hit than miss on the whole, but it leans heavily on Redford’s performance as a crusading reformer instead of a compelling story arc.

Posing as a prisoner, new warden Henry Brubaker (Redford) discovers vast corruption inside the Wakefield State Penitentiary. Hired by a well-meaning Governor’s aide bent on prison reform, Brubaker is an outsider willing to break rules in trying to fix the prison’s long-running problems. The prison is decrepit and everyone is skimming from it, from the town’s local businesses to a select group of prisoners known as trustees. The trustees are prisoners like the rest of the general population inside the prison, but given power to walk free and control other prisoners on its property. It is an unusual arrangement, as the narrative makes it seem like the prison lacks its own actual guards to keep order. The former warden had an arrangement with a local lumber company to use the prisoners as slave laborers. Prisoners are beat with impunity and criminally mistreated, from starvation to substandard medical care.

Brubaker did get nominated for Best Original Screenplay, but that seems more like a nod of support for its moralizing sentiments than actual quality. Brubaker’s life and his own job as warden begin to get threatened by powerful officials when he discovers a series of secret murders that occurred years ago at the prison. The story is very vague on the specific details, allowing the viewer to fill in the missing pieces of the mystery without much help. It is hard to care about an underdeveloped mystery that fells tacked on in the last act. A number of supporting roles feature prominent character actors, including Morgan Freeman as a crazy prisoner in isolation, before he became a household name. The acting is strong throughout by the entire cast and is easily Brubaker’s best point.

It is not hard to figure out where Brubaker is coming from as a movie. Its message against the graft of the entire state’s political system and the terrible treatment most prisoners received at the time is loud and clear, though the story begins to drag in the final act. Redford has to carry most of the film by himself, though I suspect that was the intention all along. Brubaker is slightly dated for a modern audience, but its harsh condemnation of the prison system in those times still holds some power for today’s audiences. 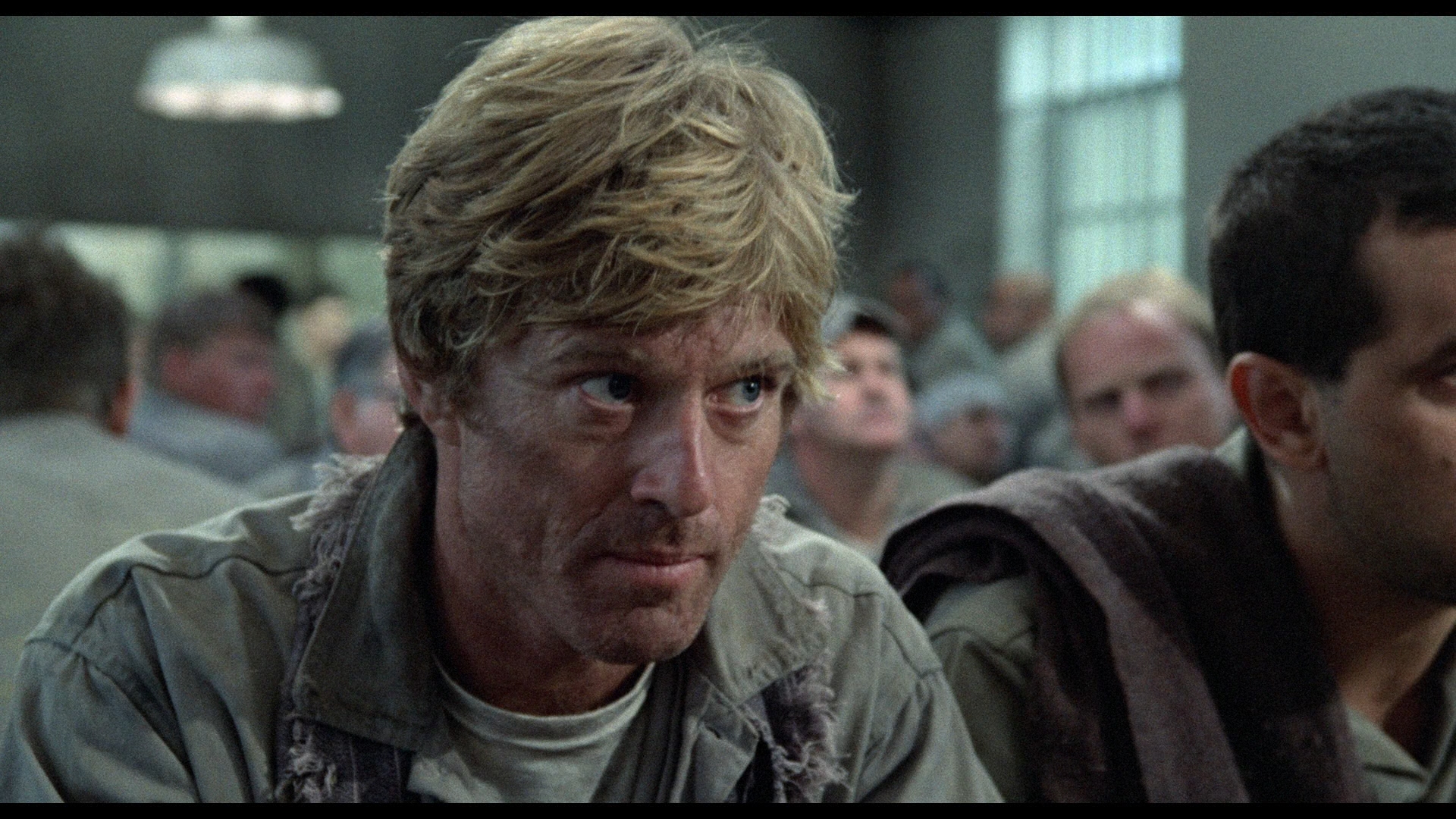 Some would consider it fortunate that a so-so movie like Brubaker has even made it to Blu-ray. 20th Century Fox has provided a passable transfer for the film in this catalog release, though it is certainly not up to the standards of the best film transfers on the format. Brubaker runs nearly 131 minutes on a BD-50. The AVC video encode of the main feature runs at high compression parameters, averaging over 32 Mbps. Its picture quality will not overwhelm anyone with its varying levels of clarity or normally grainy appearance, but the 1080P video does represent an upgrade over the very soft and dated-looking DVD version.

The image retains a healthy amount of grain from the original film stock, though there are indicators the transfer has been sharpened in spots. Halos and other remnants from the edge enhancement processing are rarely deleterious to the BD’s picture quality, though it does have a tendency to exaggerate the grain structure at times.

There is a modest increase in actual resolution and detail over the DVD. Overall clarity wavers between excellent to somewhat poor, especially inside the prison’s dank jail cells. Contrast and black levels pose a small problem inside the actual prison, as slight crushing of shadow detail is noticeable. Brubaker is not the razor-sharp experience many have come to expect with newer films, the cinematography by Bruno Nuytten is workmanlike and ordinary.

One of the stronger aspects of the video is the naturally-clean print that Fox has dug up for this disc. There is a dearth of print damage to it and the transfer is without a hint of digital noise reduction, giving the 1.85:1-framed transfer a filmic appearance. It does look like the color timing has been tinkered with for Blu-ray. A slight magenta push to the color palette provides overly ruddy flesh-tones, while the contrast has been marginally pumped-up.

In a move that will greatly please audio purists, 20th Century Fox has provided Brubaker’s original mono audio and a newly-created 5.1 surround mix in lossless form. Frankly, there aren’t huge sonic differences between the 1.0 DTS-HD MA soundtrack and the newer 5.1 DTS-HD MA option. The musical score by Lalo Schifrin is slightly more spread out across the front soundstage in the surround presentation, but the dialogue-driven movie remains firmly anchored to the center channel most of the time. The lossless mono audio provides clear dialogue and a wide dynamic range. Fidelity is stronger than average for a 1980 mono soundtrack, without a hint of thinness to the musical score. Either audio choice is recommended to viewers.

20th Century Fox has retained all of the pertinent extra features from its 2003 DVD edition of Brubaker, which is little more than a handful of trailers.

3 TV Spots (01:39 in 480i) – These brief spots appear to be promotional trailers for Brubaker from the VHS era, as the material is clearly taken from a video source with mild tracking problems.