Pat & Tiffany are meant for each other.

Pat has been released from a Baltimore psychiatric hospital, and Tiffany likely belongs in one. Together, they form their individual cures by skirting their comfort zones and working through their mental disorders. Dysfunctional and at times unhinged, the two near-neighbors form a bond over their needs, while indirectly helping each other to heath.

Pat is also battling his parents, his patient mother and OCD father who is obsessed with the Philadelphia Eagles. His quirks and insufficient guidance push Pat from the home and into the eager arms of a lonely Tiffany. The mixture is meant to be the – absolute – silver lining on this dreary section on each of their lives.

Without these two in the cast, Silver Linings Playbook is nothing. Bradley Cooper continues to stretch his legs and shatter those preconceived notions as a comedic giant, and Jennifer Lawrence astounds as this offbeat, in mourning widow. On screen, their match is stunning, as capable as a couple on film as any great Hollywood pairing. Fiction is the only barrier they have.

Silver Linings plays to its oddball strengths, keeping itself propped on its highs, rarely celebrating the lows. Mental handicaps are treated normally, a breakthrough for a medium used to shoving the sick in padded cells or shocking them into remission. Pat, despite his lack of self control in conversation, seems normal and on course. The change in prevailing attitudes is refreshing.

Not so appealing is the overall thematic arc, which clamps down on the arduous romantic comedy formula, splitting its couple as the runtime hits the right moment, and segueing into “the run” as Pat chases down the woman he has come to love. For a film so invested in doing things different and appearing as offbeat as any daring indie film, the soul crushing predictability in the framework is enough to trigger a violent episode. Silver Lining also pushes contrived conflict as it closes down, baseless as plot devices can be.

David O’Russell translates the novel to the screen with an eye for character, trimming the fat for a eagerly paced comedy/drama that is distinctly in his off color wheelhouse. Chris Tucker is an on-again, off-again counterpart to Pat who shows up on a whim thanks to legal wranglings, and Robert De Niro as Pat’s father is excitedly anxious, never willing to see his own parallels to his son.

Silver Linings will always fall back on its meld of personality, the casting tandem remarkable, a pair so astoundingly perfect on screen that everyone else should just move aside and let them work. Think of Punch-Drunk Love, where two wholly neurotic people collide in an often ambient setting. Silver Linings is a sliver similar, but conquering thanks to its leads. 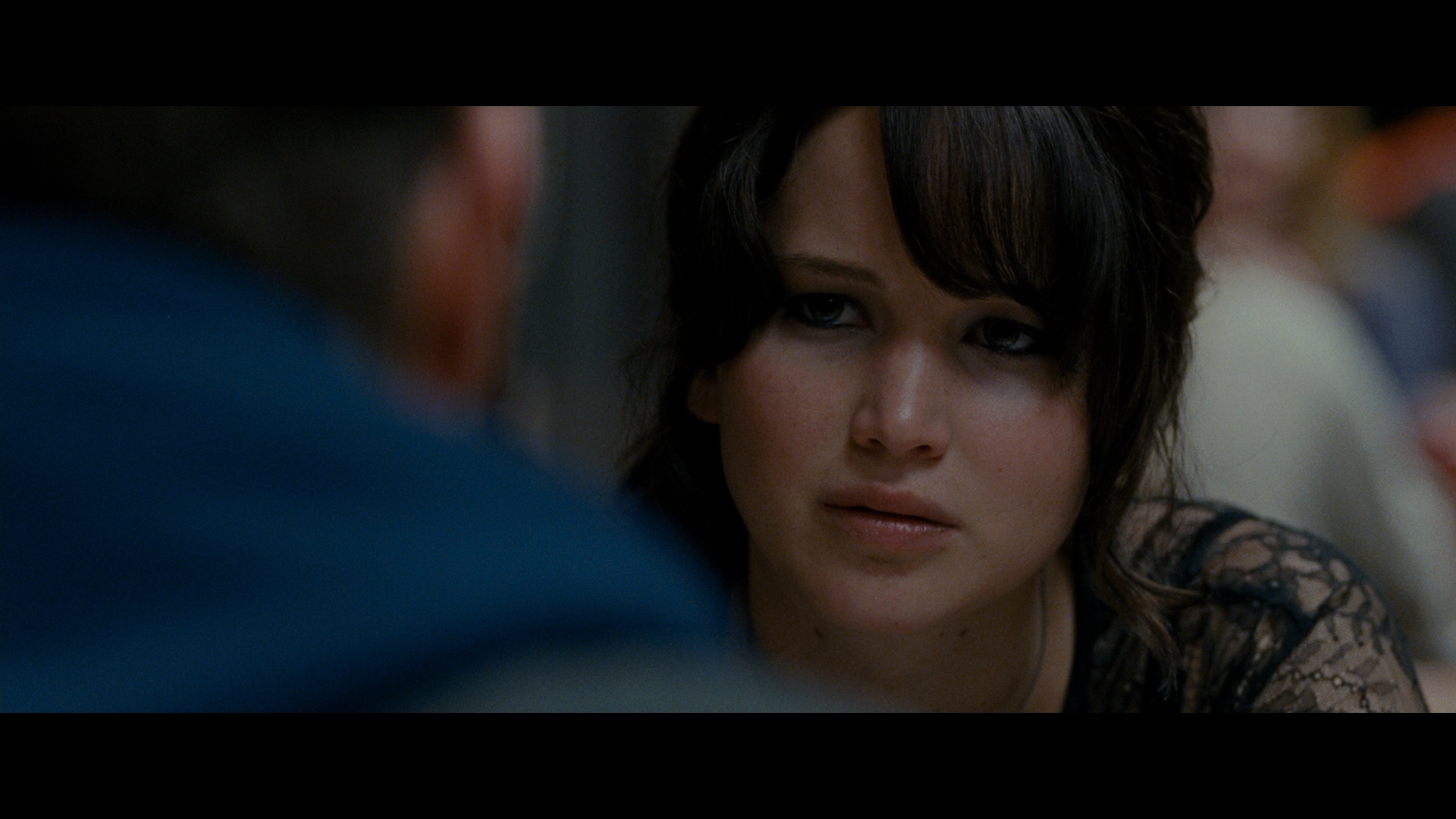 Brought to life on film, this digital encode for Silver Linings keeps things in motion without many bothers. Grain structure will sprout up a handful of times during nighttime sequences, enough to take notice of it and hints of compression. For the majority, this AVC affair has a hold on the lightly grained material.

Definition is at the mercy of the photography, veering soft with focus and sucking some of the images dry. Otherwise, exteriors and well rounded close-ups work overtime to dump texture across the 2.35:1 frame, sharply resolved and even exquisite with its resolution. Bradley Cooper’s close-ups are the most consistent, rich and full with all of the expected fidelity

Silver Linings can pour on the modern sharpness, while its color timing takes away some of that energy. Zapped with yellows and oranges, the film feels both inviting and vintage, stained with artificial age. Flesh tones take on the appropriate hues for the scene, never compromised to feel they’re unnatural.

Black levels and contrast are commendable, giving the film depth and weight as needed. A nighttime diner scene in front of a window exposes pure black on the outside, and inside, shadow detail is held together. It’s impressive even if the cinematography can be intentionally inconsistent.

Most of the needed major audio design for the film is held to a few scenes, especially where music is considered. Rich in the highs and pushing into the subwoofer where needed, the soundtrack – critical to the narrative at times – can pop. A stadium tailgate mixes well with immersing surround channels that plant the listener into the crowd.

Dialogue is balanced and crisp, tweaked slightly to represent Pat’s home, exteriors, or a dance studio. Each has their own approach. It works well.

Seventeen deleted scenes (including an alternate ending) run close to a half hour, followed by the first featurette, The Movie that Became a Movement, another 30-minute piece looks at the book and how the film portrayed the ideas. A Q&A session features most of the cast after a screening, again nearing the half hour mark.

Blips are left, including a behind-the-scenes look at Cooper and Lawrence rehearsing the dance, a training session to teach viewers how to run through the sequence, and a blooper of sorts as Cooper takes hold of a steadicam.