The cops in Gangster Squad are yanked from their seats like a backyard baseball team. John O’Mara (Josh Brolin) is tasked with taking on mobster Mickey Cohen (Sean Penn), but must do so without the support of a corrupt police department. O’Mara is on his own, and with his plucky (and very pregnant) wife, they set out to find a garbled bunch of oddball, underdog characters for the task.

You know the types. There is the hardened veteran who is an impeccable shot, the low level street cop looking to shoot down heroin, the romancer who cares more for dames than the job, and the goofy comedic sidekick who doesn’t belong. It is more a set-up for a TV comedy than serious drama – although a true story – so over produced and glossy as to reject any sensibility of authenticity.

Gangster Squad glamorizes everything. California nightclubs of the late ’40s are dazzling with their vintage neon, smoking is something to be celebrated, and the wholesale brand Mickey Cohen sells is plastered over it all. The cars, the suits, the girls. It blasts the piece with a dose of misconstrued nostalgia for American life at the time. Everything is too clean, too pure as to exist in the dirty hands of a corrupt mobster.

The Squad is presented as a singular unit, often photographed as if they were on an album cover. Low angles and sagging trench coats are meant to lift them above their undercover status; they are designed to be icons. In another script, they would have been. With Gangster Squad, they are fed to a hokey, gruff script that tears into the book of cliches and runs with it. Sean Penn’s portrayal as the opposing side of the law gives him a dead-on look, and generic persona.

Movie followers know who is destined to die. That death sours the squad who begin a droll mourning process until their rebound on the night of the final shoot-out. Gangster Squad loves the post-World War II veteran scene, men accustomed to violence while dealing in left over weapon caches. No Tommy Guns are left to rot, unless the current Hollywood plotting pathway intervenes with its disastrous emotional sensibilities.

Director Ruben Fleischer feels overmatched, his previous work being the awesome Zombieland and brisk comedic run 30 Minutes or Less. Here, with the plethora of stars and needed accuracy, his Gangster Squad is crushed under the weight of plotting simplicity. Montages and romance are part of the deal, a deal the audience is on the losing end of. 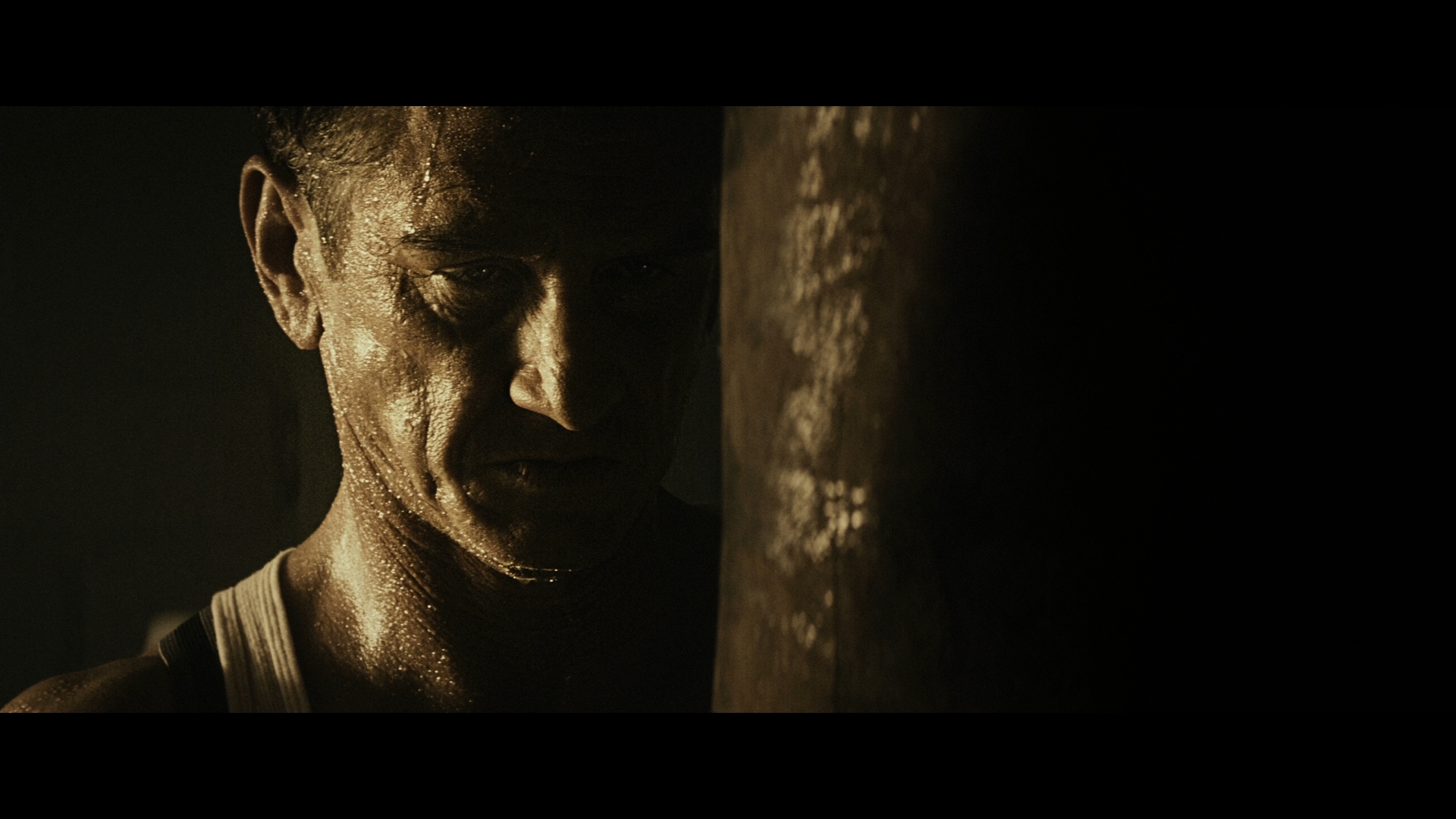 Warner issues a troublesome AVC encode for this period picture, often a little clumsy with the source’s grain structure. Banding is often significant and immediate within the first shots. A chase through an open stretch of highway near the midway point bulks up on disturbed ground, and the resulting dust cloud combined with headlights is a recipe for compression concerns.

You can see it elsewhere, inside the thickly painted walls of the homes where the grain likes to reside and make its presence felt. This bothersome quirk washes up and blotches out definition, which is a shame given its precision elsewhere. Gangster Squad is sharp, rendered brilliantly at its peaks with superlative facial definition. Suits and hats of the period are delivered to the screen with visible materials or stitching.

While a bit infatuated with orange and teal color schemes, Gangster Squad is bright enough in its saturation to bypass the modern tweakings of digital cinema. Flesh tones are warmed without being too aggressive, and in daylight, the city shines. At night, the neons take over, their blistering hues spectacular and a life saver in the otherwise darkened exteriors or dimly lit clubs.

The purity of a blitzing contrast and ferocious black levels will keep Gangster Squad on the side of right. Not a single shot will fail as it tries to register depth, the density of the image maintained even under the most limited of light. Blacks are truly inky, matching the bezel of the 2.35:1 frame, and without a loss of shadow detail.

Awash with audible cues, perfect tracking, constant elements, and outstanding balance, the DTS-HD work for this mobster flick is absolutely perfect. Club interiors brighten and shift with the camera, honing in on lounge singers and their voice fluctuations based on their position to the characters. The theme music, which weirdly sounds ripped from Dark Knight Rises, mixes in as need be, although it will be secondary to the amount of gunshots.

Every shoot-out is greeted with stupendous surround and stereo material, splitting the soundstage wide and ensuring all channels are active. Where necessary, guns are brought out with additional LFE, accentuated for intensity.

In terms of mixing, little matches the car chase in the field, vintage car engines sputtering to life and panning through the speakers. Add in gunfire and grenades (!) and the audio escalation is a marvel. The finale comes with an interior shoot-out (shoot-in?), complete with echoes that swell to fill the space. A crash then shatters a fountain that spurts water, the stream heard splashing in the proper channel as it exits the center. Awesome work.

Director Ruben Fleischer offers a commentary track, also hopping over to discuss some deleted scenes in a ludicrously short introduction. Note the pulled theater shooting scene is not included, cut after the unfortunate incident in Auroroa, Colorado. Warner would clearly like to bury it.

A comparison of locations then and now is picturesque, followed by a featurette on the costume design titled Tough Guys. Rogues Gallery is the highlight of the disc, a 46-minute insight into the life of Cohen and his remarkable lifestyle.

Gangland Files is a pop-up feature with Ryan Gosling, Emma Stone, and Josh Brolin, discussing the film between “Focus Points” which can be viewed separately, another 46-minutes on their own.