Hollywood loves a hero. Jurassic Park’s happens to be 30 feet tall and capable of moving with remarkable silence. The finale, placing the tourists of a genetically altered theme park inside a building whilst stalked by hungry, flesh-slicing Raptors, is sensational… and inherently illogical.

We all know the finish, at least those of us who grew up with the film. Jurassic Park is a generational icon, a stalwart of the ’80s and ’90s child’s entertainment diet. Dinosaurs were suddenly real, even if they stampeded through concrete walls without so much as a bump to munch of the villainous Raptors.

The Velociraptor, unknown to the mainstream prior to the film’s theatrical domination, became a cinematic icon, a villain of such disdain and fear that popular culture latched onto it. We thrilled when they killed, and cheered when met a grisly fate, but only because the film’s unlikely hero snatched them up at the final second.

Tyrannosaurus needed to be a hero. Ask any kid what their favorite dinosaur was and the answer was inevitably T-Rex, with the occasional outlier who adored Triceratops, Alan Grant (Sam Neil) among the latter. No one under the age of 10 thinks of a Rex as an instinctive killing machine; it’s a massive, hulking creature of enormous intrigue and spectacle. That’s what everyone came to see in the first place.

Micheal Crichton’s book was different. It was methodical, a thinking machine mixed with entertainment. Jurassic Park the novel was wholly Chrichton’s style, and often grisly. People paid for their mistakes, redesigned nature striking back at its egotistical creators.

For as phenomenal as the original source material is, Spielberg’s work to craft an adaptation was done with a child-like wonder, wide-eyed and hopeful. On screen, the book would never translate in a single piece, so it is no wonder elements were jumbled about to craft all three Jurassic Park features. The compy attack which opens Lost World was part of the original Chrichton material, and a raft ride in Jurassic Park III the same.

You cannot jam that together on screen at once, and thus the film adaptation was born wherein the Tyrannosaurus was not merely tranquilized and left to be, but celebrated for its visual splendor. Every movement it makes, whether from the brilliant Stan Winston practical effects or mind-blowing CGI, is meant to showcase the creature in its ferocious glory. It is a special effects attraction so astounding, that it was meant to capture the imagination of an entire planet… and it did, even 20 years later. 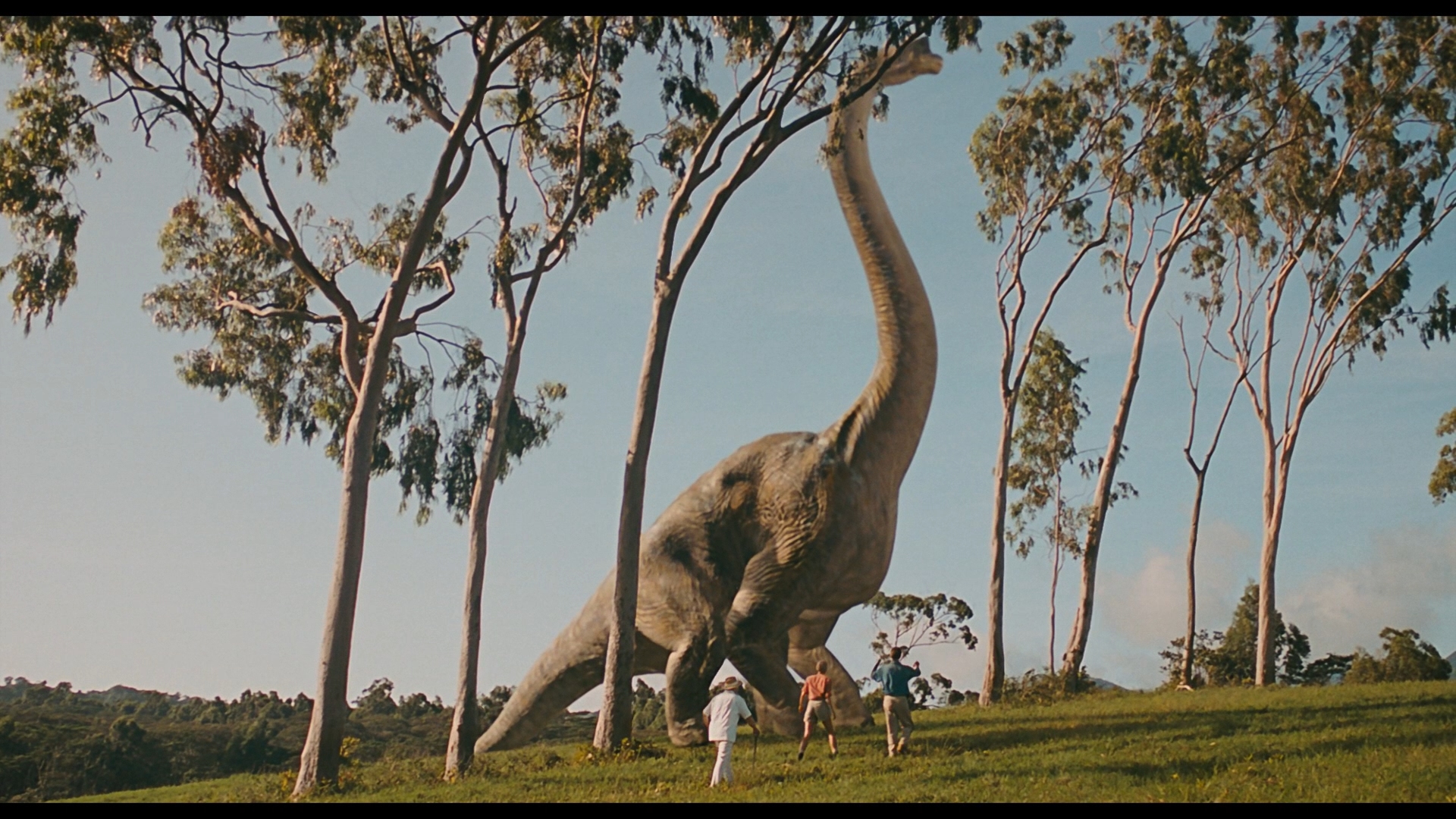 Normally, 3D Blu-ray reviews are done as an extension of the 2D release. Jurassic Park on Blu-ray was critiqued last year on DoBlu, but this release is different. Utilizing a new master struck at a higher resolution, everything is freshly coated, and thus it deserves a second go. The immediate reaction to long time watchers is the color scheme. The jungle, from those that house the amber in the beginning to those near Costa Rica have been flushed with warmth. Greens have been taken and pushed into an orange tint that sucks them dry of natural vibrancy. Instead of saturating, the presentation dims all of its hues for the sake of burnt flesh tones.

Jurassic Park’s 20th Anniversary rebirth also signals a change of pace for Universal’s approach to the piece. Previously on Blu-ray, the sharpening would tack on blotchy qualities, trying to compensate for the levels of noise reduction. One of those things is gone, leaving the DNR to muck up the fidelity exclusively. Some shots are irreparably harmed, unquestionably the shots of the helicopter panning down onto the island. Richness of the plant life is lost, bleeding into itself to create blobs of information that are neither natural nor appealing. Faces are waxy and smoothed over, appearing airbrushed, as do clothes. The loss of film grain is a loss of the film’s natural state.

What has the added resolution scan changed? Fidelity, sometimes. Close-ups offer additional oomph with facial detail, and those eerie close-ups of the Raptors in the kitchen & control room are wonderful. Shots that survived the kick of digital tinkering are superb, although fewer in number to those that are hit with the brunt of the impact. Black levels are fine, and the glasses pose little harm to the overall contrast. Those daylight shots are just as vivid as ever.

Having seen the 3D release in theaters, the Blu-ray depth is better. It still has issues, namely a loose grip on cross talk during those nighttime sequences inside the fallen jeep, but overall, the dimensionality is richer and tighter. There is a sense of artificiality here; backgrounds with a soft focus tend to separate cleanly from the actors, resulting in the apparent cardboard cut-out effect. Depth comes at a cost, and undoubtedly this was a conversion.

However, Jurassic Park’s cinematography lends itself to 3D better than anyone realized. Glances at the fences from above reach from the screen, and tight shots in the dense jungle as Muldoon hunts the Raptors (vice versa actually) are stupendous. Even before the action, the dig site feels miles long when the camera permits, and the helicopter swooping into Isla Sorna are wonderful. Dinosaurs poke at the screen or leap upward for shots that almost feel gimmicky if everyone didn’t know better. This is smart too, the Mr. DNA and computer screen images left alone without depth, preserving the world as it is seen from the character’s perspective. This is a great disc of familiar material to show off the tech, although not as tight as film’s shot in the format.

Note: The 2D version inside the packaging is a re-release of the original Blu-ray. This score reflects the video quality of the 3D edition, and then the overall rating of its depth. Sorry for any confusion as this falls outside of DoBlu’s usual scoring style.

Also new for 3D is a masterful remixing of an iconic DTS originator. This all-new 7.1 mix brings out elements that before were buried, especially within the John Williams score – arguably the composer’s best. Smaller, more fleeting pieces are better presented, say when Nedry first enters embryo storage. There is a brief digital composition that was lost before, brought out with more dominating force without running over the other effects.

Balance is better all around, dialogue stronger and raised to capture those milder, inconsequential lines. All of them are clearer without sacrificing ambiance. The key stuff, say the mighty T-Rex roar, is enormous. While the LFE will likely never reach the vaunted depths of the DTS Laserdisc, this brings us close, working in with the ear-shattering highs. In the Gallimimus stampede, surrounds are placed more distinctively, working in the two additional channels naturally with a graceful surround spread. In the kitchen scene, Raptors move more fluidly and aggressively through the room, snorting as their claws clack on the metal floor. Nothing here is added, merely accentuated as needed.

It is easy to go on. The Brachiosaur rumbles as it drops to ground after eating, the perfect rain effects during the main Tyrannosaur attack, general sounds of the jungle, and even the cork on the champagne bottle which Hammond pops in the trailer, now drooping off into the right stereo channel. This is the way to listen – and appreciate – Jurassic Park. If you feel the text needs more kick, then it is arguably the best remaster of a post-1990 film ever.

Only one extra exists on the 3D disc, and it is actually in 3D. World of Jurassic Park 3D runs through the conversion process and how it was done for about eight minutes. Inside the package, the 2D disc houses all of the bonuses from the prior disc. You can refer to that review to see what is offered in full. The score reflects the 3D disc only.