It’s 1858, Texas. Django – the “D” is silent – walks in line with other slaves. Unbeknownst to him, his traders are due to meet a grisly fate.

For Django Unchained, its heart is in its violence and repercussions. Everyone neatly fits into boorish archetypes, the southern, pre-Civil War attitudes abrasive as to make bloodshed an act of vengeance for both the characters and audience. They’re made to drown in their own blood, and celebrating the taboo, Taranatino rips open actors with splattering heads, impossibly crude groin blasts, and shattering knee caps. It is not passe so much as it is cartoonish.

Violence is an odd thing. Unchained finds bodies in piles, and via its own means, out of necessity. The film is comfortable with making the audience feel the opposite, a grisly flashback whipping scene torturous to view. For its flair and comedic wit, this is a film that knows how to make its audience squirm too, unable to shy away from the darkest parts of human history. Intent is everything.

Django (Jamie Foxx) witnesses many things, some before the camera pans across him bound in chains, and many acts in view of the lens. His savior is an eccentric bounty hunter, King Schultz (Christoph Waltz), who out of personal need plucks Django out of the slave train. Their introduction is uncouth, one man pinned under his dead horse while Schultz casually writes out a certificate of sale for Django. Despite the eccentricity, Django is in no position to argue with a German man who pulled him into freedom.

The two men bond over a heavy winter, seeking out bounties with a high price and sharing in the wealth. Django stays on task, sometimes a difficult one, to be reunited with his wife. German-speaking herself, Broomhilda is cast as a mythical woman from the countries mythology, and Unchained treats her with appropriate reverence. The script must collapse around her, making this spin on low-level spaghetti westerns blossom amongst the direct plotting.

Packed into a frame shy of three hours, Unchained arguably needed an editor, but pick a scene that can be sliced without losing the inherent charms of Tarantino’s ferociously smart dialogue. In those instances, you would also be clipping performances, whether of Waltz’s magnetism, Foxx’s held anger, or DiCaprio’s sly vileness as head of a plantation, named despicably “Candieland.” Place any secondary characters in the same situation, particularly the obedient and mouthy Samuel L. Jackson, who may never have been cast better.

Tarantino’s films are endlessly dissected for their cinematography (brilliant as ever here) or cruelty (also peaked), but those add to, not make his films. It also brushes with dialogue, an opening tirade that invests the viewer so heavily as to be hooked from the outset. No question, that is Unchained’s richest quality, and it continues on a spirited path which lands the film close to genius. 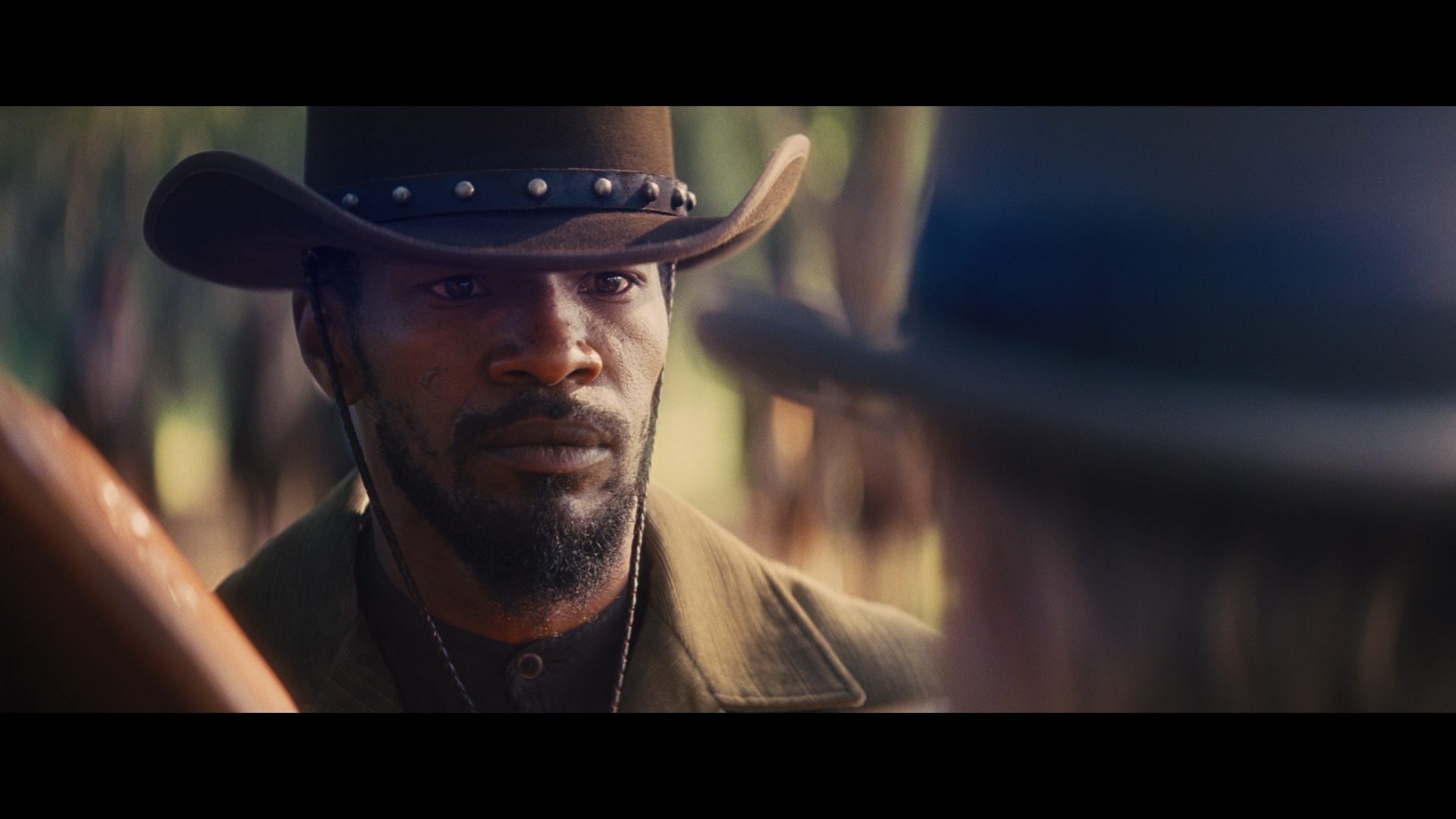 Shot on film with the lightest of grain, the encode from Anchor Bay will host no potent challenges towards delivering the sharpest of images. Opening scenes are performed in darkness, and the black levels jump into superior form. Depth and dimensionality even in these scenes is exquisite, never faded or dimmed. A flashback sequence will alter the stock to flatten intentionally, roughing things up for a cheaper, B-level appearance. Otherwise, Unchained looks expensive and carefully crafted.

Focal tricks and lens tweaks are everywhere, often causing a softness that has nothing to do with tinkering or compression. You can see it immediately, as longer shots feature fuzzier faces that slightly distract. There are other moments where an anamorphic effect is used, bowing out on the edges of the frame to capture a vintage look. It’s so effective, and the central photography is so grand, that is has no ill-effect on the image quality.

Draped in earth tones, most of the piece adheres to a simplified palette. Browns are hazy in most town exteriors, greens overflowing on plantations, and heated oranges dotting the candle-lit interior. Variances in the look are superb, delivering a variety of hues to suit the purpose of the story. Again, a flashback will blot out contrast and oversell saturation, briefly done for effect. The only thing allowed to breathe in Unchained is blood. So much red.

Of course, the film is not without texture, enamored with the extreme close-up and headshots that are framed for high-fidelity detail. Beards and skin texture are enormous given the resolution afforded to the disc, and elaborate costumes that appear striking in any circumstance. Establishing shots of trees or landscapes are marvelous, aided by the above mentioned greens, or maybe a striking sunset. It’s hard to get enough of Django Unchained.

Unchained’s hearty music is a dominating highlight for this disc, with a satisfying layer of bass applied to bring the songs into the fold. Clever use of the surrounds will split the soundtrack too, enveloping as much as it hits home in the LFE.

For such a dramatically violent feature, the period keeps weaponry quaint. Gunshots are light without accompaniment of the low-end, poppy as their reach peaks within the opposite end of the audio scale. What shoot-outs will bring is wonderful tracking, shots fired in each channel. An especially emotional shot from a hilltop rings out as the shot travels across the plains. The effect is perfect.

Within this DTS-HD mix lies a spread out sense of place, especially sharp with traveling dialogue. Characters moving off screen will be heard from the stereos or surrounds depending on the direction. Transitions are clean, managed perfectly and in balance with the other channels. The film closes on a significant explosion, one that sends debris in multiple directions and rattles the low-end a bit. It’s a grand closure on a solid if often sparse audio design.

Extras included bring a wonderful, personal look at certain aspects of the film. Often, the films are credited to Tarantino, yet here are bonuses that highlight the work of those who rarely have the public eye. Remembering J. Michael Riva focuses on the production designers eye for detail, and celebrates his life before his passing in 2012. Re-imagining the Spaghetti Western focuses on stunts, mostly regarding the horses, with the trainers. Costume Design of Sharen Davis squares up the period designs and flourishes that add to the character.

Two promos are dumped in, which is a shame considering there are further aspects worth taking notice of, yet untouched. In all, there are around 40-minutes of well-produced bonuses.