Jersey Girl commits some unconscionable sins of modern movie making. Ben Affleck stars as the prototypical overworked father, strike one. Events are foreshadowed with a giant spotlight from the opening dialogue. Strike two. Affleck needs to perform “the run,” a cross-city jaunt to see his daughter perform in the school play. Strike three. Afterward, it is the slow, ridiculous clap as one member of the audience stops staring in total shock to celebrate what happened on stage. Strike four. Why is this movie still in play?

Because, for some reason, it has hooks. Jersey Girl has grips of steel that tug on the viewer and demand that you become enthralled with its awkward adorableness. Jersey Girl screams at the top of its lungs to keep watching, and you have to listen.

Certain movies gain leverage and are able to withstand the beating they should be taking. Jersey Girl opens in a classroom as kids read sexually charged papers about their parents in front of everyone… until Gertie (Raquel Castro). Her story, although filled with uncomfortable sexual dialogue, charts an emotional path through her young life.

Jersey Girl flashes back to 1994, then sweeps around seven years later in a confusing wrap-around to show a changed Ollie (Ben Affleck). Lost without his former career as a publicist, living with his enjoyably personable father (George Carlin), and taking care of a child after his wife dies, Ollie struggles to cope. His life is tattered until he walks into a video store headed by a free spirit clerk, Maya (Liv Tyler). Cue a personality as Ollie begins to enjoy himself, and learn the routines of fatherhood.

The set-up is painful, a Sunday night TV movie waiting to blossom across the broadcast networks until it dies, forgotten on an obscure video service. And yet the film perseveres, willing to chug forward with surprising, open conversations. It does things and goes places that add hints of discomfort, yet build a typical family dynamic within the home.

This is a Kevin Smith feature, unmistakeable despite his lack of on-camera time, instead identifiable through crass dialogue that skirts by with a PG-13. Jersey Girl is oddly comforting, the docile voice of Liv Tyler calming the abrasiveness of Affleck’s stress. His growth, whether following the exact pattern expected of the character or not, naturally plays through. That breaks when Jersey Girl finds itself amidst the “break up,” all part of reaching “the run” usually reserved for romantic comedies. This is a different type of love that probably does not deserve the pass, but it is all too damn charming.

Jersey Girl deserves some personal resentment, picking apart an audience with its cliches and terrible decision making. In the end, if it can conquer all of Hollywood’s worst with infectious laughs, dramatic lows, and likeable character, so be it. Let the film be outside of Smith’s usually more audacious work. 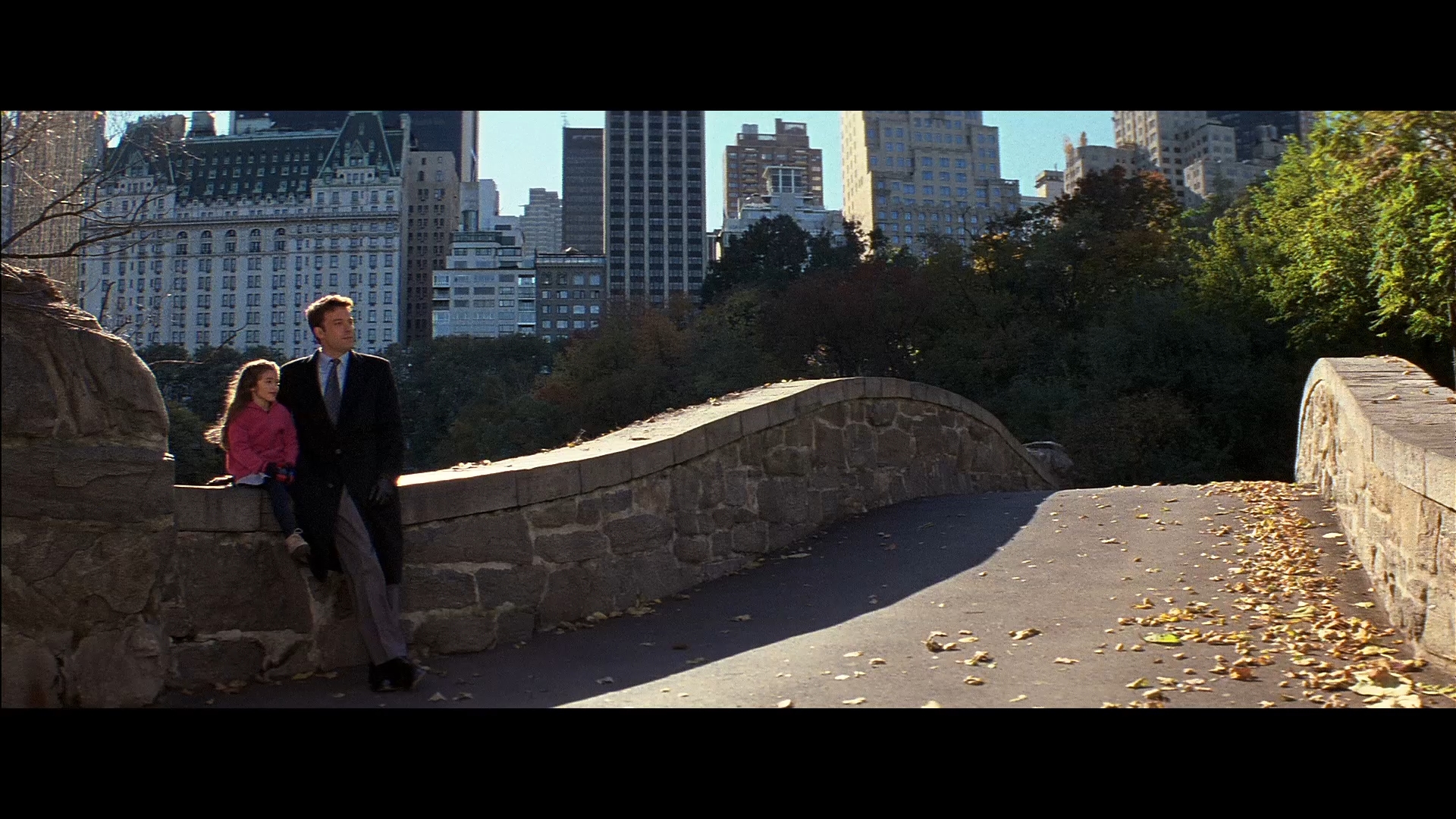 Things could be different for Jersey Girl on Blu-ray. Underneath the compression scheme that shreds the visuals to pieces is a great looking master. It looks to be recent as far as one can tell, with sharpness relatively high, fidelity evident, and just the slightest hint of sharpening. Consider this could be a leftover from, say, between 2008 or 2009, built for late HD DVD or HDTV broadcast. In other words, imperfect, but serviceable.

‘Twas not to be however, as Echo Bridge preps the film for one of their super ultra mega-movie packs where they shove an inordinate amount of flicks onto a single disc. That cuts available space for the video (not including audio) to a pathetically small 10GB sliver of a file. You can readily imagine the results.

Overlapping the clean color space and superb black levels is grain. Already a hair jumpy because of the sharpening, the AVC encode cannot cope. Visuals swarm as DVD-level compression crunches the available fine detail, blots out backgrounds, sours establishing shots, and creates thick banding. Images of crowds, whether in a classroom or the transition to the opening moments at a party, are primed for low-end disaster.

Jersey Girl is still a viable Blu-ray. The somewhat high-res master, mild sharpening or not, does create clear benefit. Oppressive as artifacts are, they still return a mildly better image than MPEG-2 could, with end results that may not be pleasing, but are enough to create a passable image.

For the fallacies of the video, this capable DTS-HD mix will not make the same mistakes. A smooth low-end greets the music, adding some weight to the overall clarity. Crowds are active, especially a chant around 25-minutes in that spirals around to handle the spaciousness of the scene. Same goes for the intolerable slow clap at the school event in the end.

Missing is some city ambiance, New Jersey and New York feeling awfully small, although that gets docked from the original mixing. The codec is not clipping any material, even with the overall low volume.

If you are reading this in the future when Echo Bridge crams the film onto their multi-pack, chances are it will not carry bonuses. The stand alone release has two commentaries, one bringing director Kevin Smith, sidekick Jason Mewes, and producer Scott Mosier together, the second with Smith and Ben Affleck.

A promotional making-of from around the time of release (2004) is entirely skippable, but a nice chat with Smith & Affleck as they look back on their co-features is fun, if a little long. A Tonight Show skit from – again – 2004 or so has Smith traveling around shooting locations, and is short enough to be an inoffensive watch.