Shuttlecock is amazing. Prior to Dragon Lord – or Dragon Strike if you prefer – that sentence was never muttered. Rumored to have a record 1,000 takes, the comeback win as Jackie Chan’s team decimates their often violent rivals is mesmerizing to watch. The flips, headers, and dives carry no regard for personal safety, and require such precision to work on camera, the sequence remains a feat of perseverance.

Of course, for Dragon Lord, the scene carries no purpose, this a loosely aligned, flabby follow-up to Young Master. Chan’s third directorial affair is aimless, wandering from scene-to-scene without continuity in a broadly stroked comedy. Shaky scope guides the restless, segmented structure. A gang of artifact thieves pesters the local community, Chan inadvertently forced into the fray while fighting for the affections of a girl.

Cartoonish and overacted, although not without intended purpose, Dragon Lord is forced into high gear with minutes to go, a rough and tumble brawl in a barn teetering on a second floor balcony as others suffer below. With dissipating genre cliches, including a one-eyed, bearded villain, the martial arts frenzy carries the film to a close almost forgetting until these moments it had a story to tell. Begrudgingly, the kicks and flailing punches ensue with vengeance, wildly out of character, and capping a brutal death in a film that otherwise means no harm.

Aficionados of Chan’s earlier works may find Dragon Lord more tolerable than those brought up on the likes of Rush Hour, although this 1982 piece never sizzles either way. There is a reason it rummaged through the public domain for what seems like eons on DVD. It never found a home, and neither does the plotting. 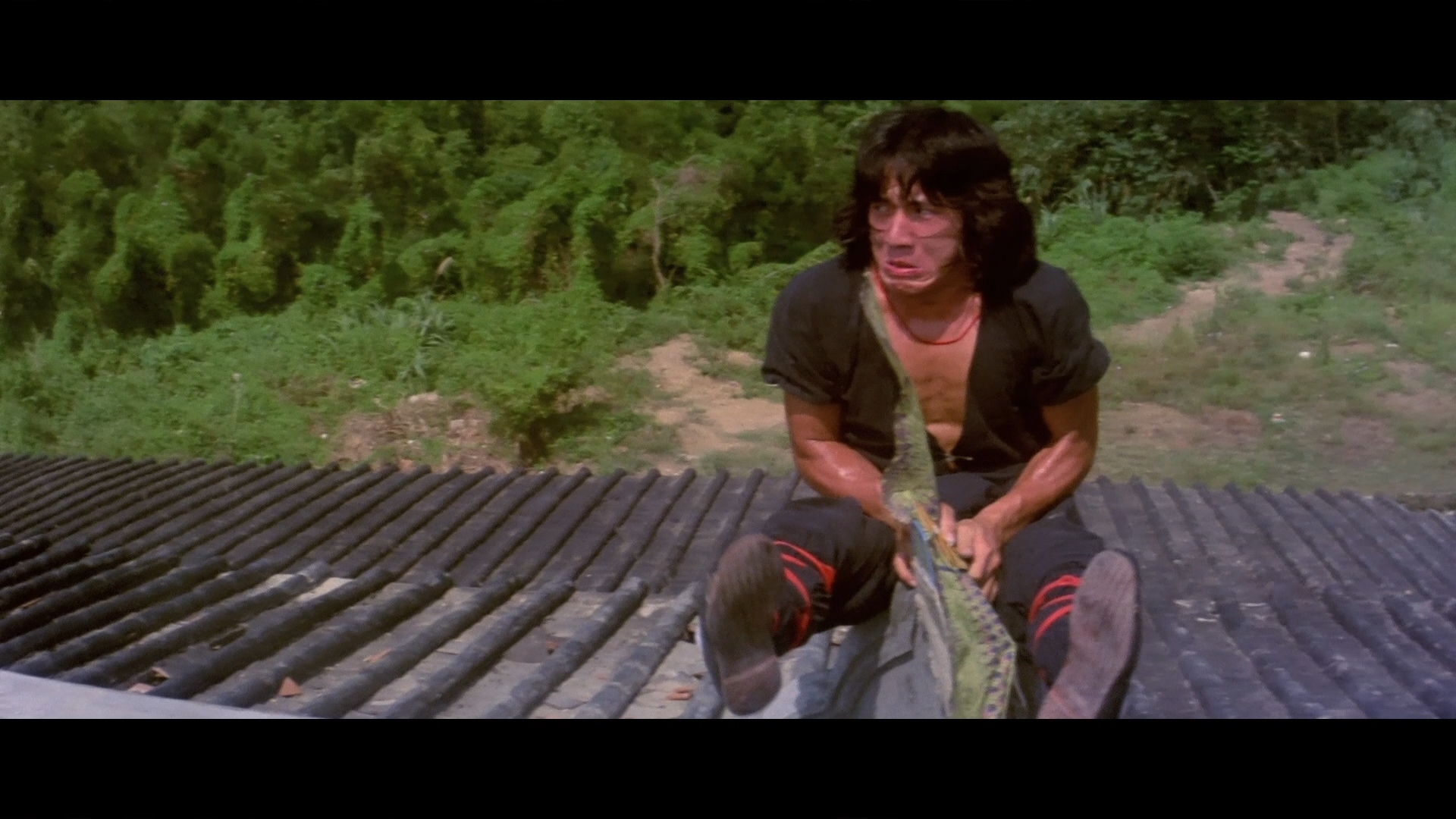 Echo Bridge issues the film to Blu-ray with the proper aspect ratio and then seems to forget everything else. It is not often you see a Blu-ray mastered so weakly, likely at a resolution that barely eclipses DVD… if not matching it. Even the benefit of an AVC encode does not seem to help, opening Golden Harvest logos awash with chunks of compression, and the rest of the film is drowning in a digital, smearing haze.

Generally, this is a time to discuss detail, its consistency, and pleasantness. None of that is featured here. The few close-ups of any definition seem accidental; they just happen to have the focus and be tight enough that they cannot be run over by the disc’s problems. Whatever grain was left has been turned to mush or frozen in place by noise reduction. Combine that with an encode that reaches admirable numbers without visible results, the smearing becomes out of control.

Dragon Lord has clearly never underwent restoration, the constant and abrasive levels of damage absurd given the modern expectations. Massive tears, skipped frames, judder, dirt, scratches, and lines run through the print. These are the only evidence this is film. Black crush will pulverize whatever remains.

Colors are bright, so that is something after this display, showing total lack of care. Dragon Lord’s sole claim to success is that it does trump Project A2’s stateside release, but then again, it is nigh impossible to reach those clustered depths of HD hell. This has no reason being on Blu-ray in this state.

After years of fans struggling to see proper editions here in the states, Echo Bridge dumps an English dub onto the Blu-ray as the only audio choice. It is as egregious as it is draining to an already sluggish film, dubbing “Three Little Indians” in place of Chinese poetry. Good luck finding a dialogue decision worse than that.

Fidelity bottoms out almost immediately, the scratchy score and flat dialogue a bother throughout. Whatever benefit can be derived from DTS-HD is unknown when dealing with a source this faded. Like the film elements, the audio is strained from age and left to rot.

A trailer is the sole extra on this stand alone release.