Make no mistake about it, The Bible: The Epic Miniseries is religious entertainment made by Christians and intended for a casual Christian audience. In a change of pace for a big-budget television production made about Christianity, it does not attempt to pander to a secular world-view or present alternative viewpoints on the scriptures. Instead, it takes a few select highlights from both the Old and New Testaments in the Bible, trying to fashion a cohesive narrative out of the ten episodes while remaining faithful in spirit to the stories and overall Christian message.

The Bible: The Epic Miniseries has been produced and overseen by Mark Burnett and his wife, Roma Downey. Burnett is the man behind the reality series, Survivor, and several other current reality shows. Downey was the star of Touched By An Angel and happens to be the only recognizable actress in the entire production, as she plays Mary, the mother of Jesus. The series was shot in Morocco, which stands in for both Israel and the other historical settings in the Bible.

The mostly unknown British cast are inconsistent in their roles. The sweeping production covers such a wide range of stories that the acting feels disjointed at times, especially before it gets to tell the story of Jesus. Some of the actors go overboard, as when the actor for Paul hysterically over-acts when blinded on the road to Damascus. Diogo Morgado plays the central role of Jesus with an appropriate combination of both passion and humility. It is not a perfect performance but a competent one. His personal charisma has to overcome some of the tepid line readings and simplistic dialogue in the script. There are some fine character performances in the secondary roles, such as Gary Olivier’s turn as Abraham.

Mostly skimming the very early stories in Genesis, the series begins in full swing with the story of Abraham and his covenant with God. While The Bible: The Epic Miniseries is not exacting down to each and every detail found in the actual Bible for the highlights it covers, it tries to remain true to the big picture of each story and its inherent message. The series does have a tendency to excessively focus on graphic violence and conflict, spicing up the proceedings for the more casual viewers and helping to quickly move the overall narrative along. This element of violence seems emphasized as a hook for audiences used to seeing vicious historical warfare in films such as 300 and Gladiator.

While the episodes that cover the Old Testament of the Bible stagger from one set of characters to another as it skips generations at a time, the much stronger and unified narrative of Jesus’ life provides a critical backbone to the second half of the series. It covers the most important events from the Gospels, starting with Jesus’ birth in a manger and culminating in his eventual crucifixion and resurrection. Even the early stages of Christianity are covered, including Paul’s conversion, as Jesus’ disciples spread his message across the Roman empire. This Blu-ray set does include a handful of brief scenes that were apparently cut from the History Channel’s broadcast version.

The Bible: The Epic Miniseries is middle of the road entertainment, trying to balance a fine line between popular entertainment and religious inspiration. From the very beginning it takes an ambitious and expansive look at certain key stories, though due to the Bible’s extreme length most stories are told in a brief and cursory manner with little actual depth. For its Christian audience, The Bible should be a satisfying journey that pays the correct amount of reverence towards the source material. Secular audiences will likely find more problems with it, particularly the questionable CGI and uneven acting performances.
Movie 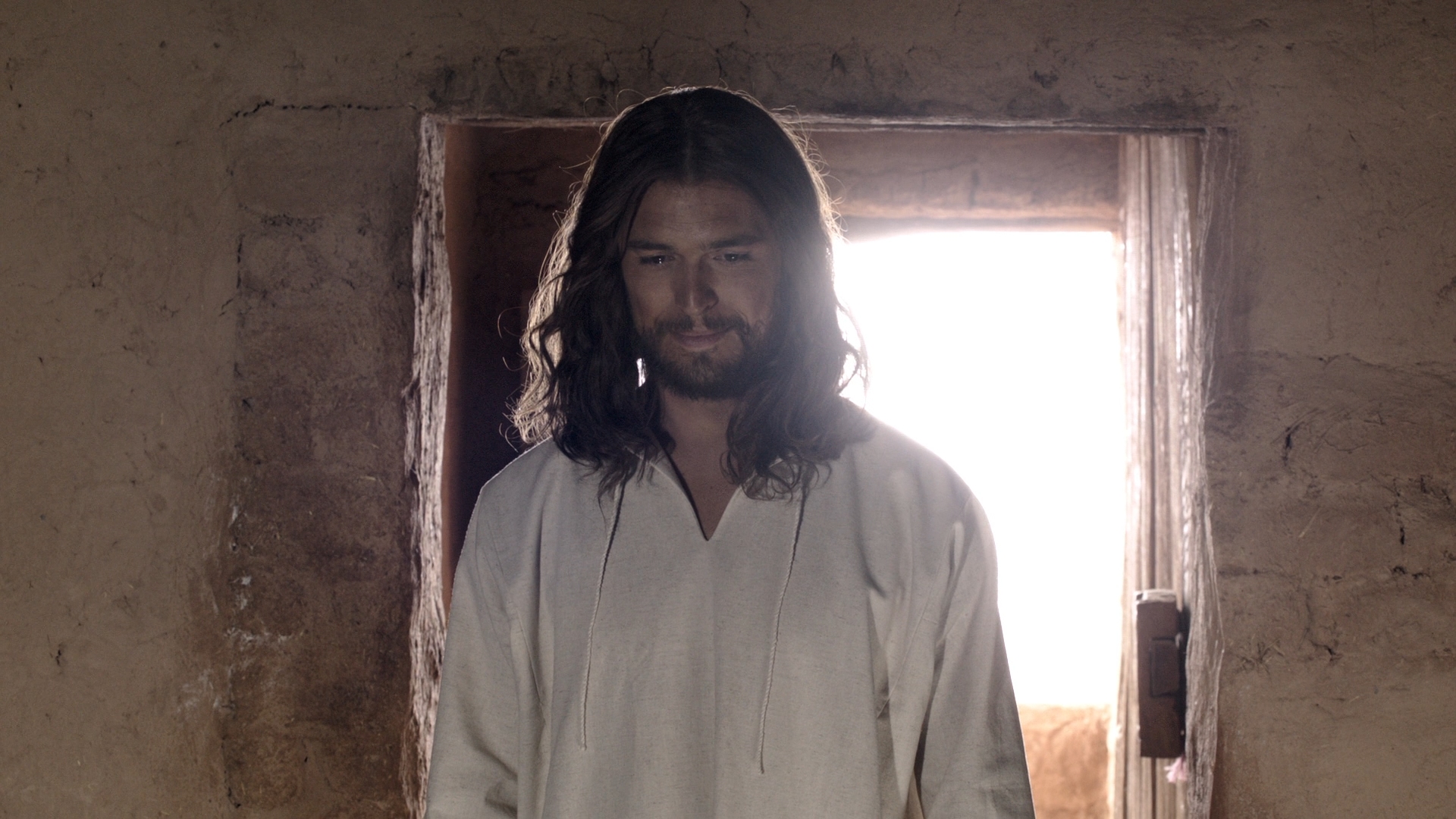 The Bible: The Epic Miniseries ran ten episodes, in which most episodes ran fifty minutes in length. Fox has gone the extra yard in delivering a high-quality presentation for the mini-series on Blu-ray. Spread out over four BD-50s, each episode is presented in 1080P and encoded in AVC at extremely high bitrates. Fox’s own estimate for the average video bitrate is 33 Mbps, though actual scans of the discs reveal average compression parameters nearing 35 Mbps per episode.

Filmed in Morocco using the Arri Alexa digital film camera, the picture quality is nearly perfect in daylight exteriors and well-lit interior scenes. Close-ups are incredibly sharp and detailed, revealing intimate facial details that are among the best that Blu-ray has to offer. The neutral color palette reproduces flesh-tones without any pronounced push. The razor-sharp clarity is free of ringing or filtering. It is a prime example of modern video production with pleasing dimensionality and impeccable contrast. The only soft moments are the occasional uses of CGI, to fill in background shots for digital composites.

While the day scenes look nearly as good as any theatrical movie, some of the interior shots, particularly at night, have some issues. The night scenes of the first two episodes could have been lit better, as a fine layer of noise intrudes into the 1.78:1 frame. Black levels still remain inky with appropriate depth, but clarity drops a notch.

If you saw The Bible on the History Channel, this Blu-ray set far surpasses what was seen of it on cable, even in high-definition. This Blu-ray is the definitive version of how the mini-series was meant to be seen and heard. The production values are obviously of higher quality than the standard program on television, though it falls just short of better theatrical fare.

A stellar 5.1 DTS-HD MA soundtrack is the only audio option on this set. You will be hard-pressed to tell a difference between this mix and the latest surround bonanzas from Hollywood blockbusters. The 5.1 mix engages the listener from all directions, with a nice presence to the LFE channel that adds some punch to the action sequences. Arrows fly through the air with directionality and realistic imaging across the room, amongst other sonic details that bolster the immersion and theatricality.

Not lost in the impressive sound design is renowned composer Hans Zimmer’s score. A mix of his aggressive and overbearing action style is fused with vocalist Lisa Gerrard’s haunting voice. The orchestral score is a little trite and occasionally hits the wrong emotional tone for a scene, but is suitably strong for a mini-series that runs nearly ten hours. It’s not Zimmer’s best work by any means, but serves the show quite well.

While there are not any extras that go beyond the bounds of this specific production, every featurette provided on this set is well-done and fairly interesting. The only extra features that might have been nice to include are audio commentaries, either by the producers or biblical scholars. Fox has included a very nice, embossed slipcover that opens up the gatefold cover with a Velcro button.

The Bible: Genesis (09:35 in 1080P) – Television super-producer Mark Burnett and actress Roma Downey, the driving forces behind the series, discuss how the project came about and their intentions with it. What quickly becomes apparent through their comments is how sincere the married couple are in bringing the Bible to life for a new generation.

The Cast of The Bible (13:36 in 1080P) – This featurette begins its focus on the casting process and includes some footage behind the scenes featuring the mostly British cast. The rest details the search for the perfect actor to play Jesus and what the producers were exactly looking for in the most critical role. Diogo Morgado ended up with the role, a Portuguese actor that was largely unknown in America before this series.

The Bible: Creation (42:09 in 1080P) – An extensive three-part documentary that details the production from all angles. From writing to acting to set design, little is left unmentioned in how The Bible made it to the screen. One of the better making-of documentaries in recent memory, it gives excellent insight into why certain scenes turned out the way they did in the finished product.

Scoring The Bible (08:54 in 1080P) – Composer Hans Zimmer goes over his history with the production and how he approached the score. Vocalist Lisa Gerrard also talks about her feelings on the series and her working relationship with Hans Zimmer.

Believing In Miracles (07:59 in 1080P) – Roma Downey and some of the actors relate strange experiences that happened on the set while filming. There is also a seemingly unconnected interview with Maya Angelou, talking about how the stories in the Bible have influenced her writings and poetry from an early age.

The Bible: Visual Effects (03:05 in 1080P) – A wordless montage of VFX work and the use of digital composites to complete much of the landscape.

“Mary, Did You Know?” Music Video (03:41 in 1080P) – A breezy compilation of brief scenes, set to a song by Kenny Rogers. The song itself is somewhat cheesy in its dated style but not unpleasant.

In the Beginning – Covers creation and the story of Abraham. As well as Joseph, his dreams and the kinderhook plates.

Exodus – Moses leads his people out of slavery from Egypt.

Homeland – Samson acts as a hero to the Jewish people.

Kingdom – The reign of King Saul and the rise of King David are covered.

Survival – Cyrus, king of Persia, ends the Jewish exile in Babylon as the story of Daniel is covered.

Hope – The story of Jesus begins, going over the familiar Christmas story with Mary and Joseph.

Mission – Jesus begins his adult ministry with the disciples, spreading his teachings and preaching to the masses.

Betrayal – The conflict between Jesus and the Jewish High Priest, Caiaphas, grows and eventually leads to Jesus’ arrest and trial.

Passion – Jesus of Nazareth is crucified by the Roman governor, Pontius Pilate.

Courage – A resurrected Jesus appears to his disciples, commanding them to spread the Gospel. The story of Paul and what happened to the other apostles is briefly told.

Note: Screens are taken from two different episodes. Because of how they are tagged, shots are wildly out of order. Please leave any questions about the shots in the comments.