Make no mistake about it, Hemingway & Gellhorn is a vehicle for star Nicole Kidman to strut her acting chops in the role of Martha Gellhorn, the legendary war correspondent. Since a movie about Gellhorn’s experiences on the front lines of the 20th Century’s biggest conflicts would not be as marketable, HBO and director Peter Kaufman have mainly turned the film into an epic romance based on her brief and stormy marriage to the iconic American author, Ernest Hemingway. Hemingway is stylishly played by leading man, Clive Owen. Their chemistry together overcomes some of the film’s bigger problems, producing an entertaining, if scattered, drama.

The first half of the movie is set against the backdrop of the Spanish Civil War, in the latter years of the 1930s. Martha Gellhorn is an inexperienced war correspondent sent to Spain and immediately becomes friendly with Ernest Hemingway, also living in Spain as he helps to create an anti-Fascist film called The Spanish Earth. Attracted to each other for different reasons, their chemistry is immediately obvious on the screen as they survive their hotel getting shelled in the war.

Nicole Kidman is absolutely perfect in her portrayal of Gellhorn, a courageous writer ever willing to charge to the front lines of a battle for her reporting. It is some of her best work on film and should have won an Emmy. Clive Owen makes a perfect pair with Kidman, though his dashing turn as the most famous American author of the time is tempered with a failing accent that strays far too often into Owen’s native British accent. HBO has rounded out the supporting cast with a number of well-known names in minor cameos, from Robert Duvall to Tony Shalhoub.

Kaufman’s direction is heavy handed and he loves randomly inserting his characters into mocked-up archival footage, for that added touch of authenticity. It is a curious choice that does add a bit of visual spice to the drama, but the technique also introduces a level of surreality that proves distracting over the course of nearly three hours. Where the romance goes wrong is the ponderous length of the story, as so much of the characters’ lives are fit into 155 minutes. The movie starts dragging in its second half, after the initial romance in Spain has been consummated and the pair have moved on to a testy and combustible marriage.

Hemingway & Gellhorn is ambitious in its designs, attempting to give Martha Gellhorn’s life story its proper due while also romanticizing her marriage to Hemingway. Adult romances such as this one are rarely told anymore by Hollywood and Nicole Kidman’s performance is possibly the best of her career. But some movies simply don’t work that well, even with all the correct ingredients. Hemingway & Gellhorn only partially succeeds as the historical epic it aspires to be for Philip Kaufman. It is a misfire, but a stylish misfire. 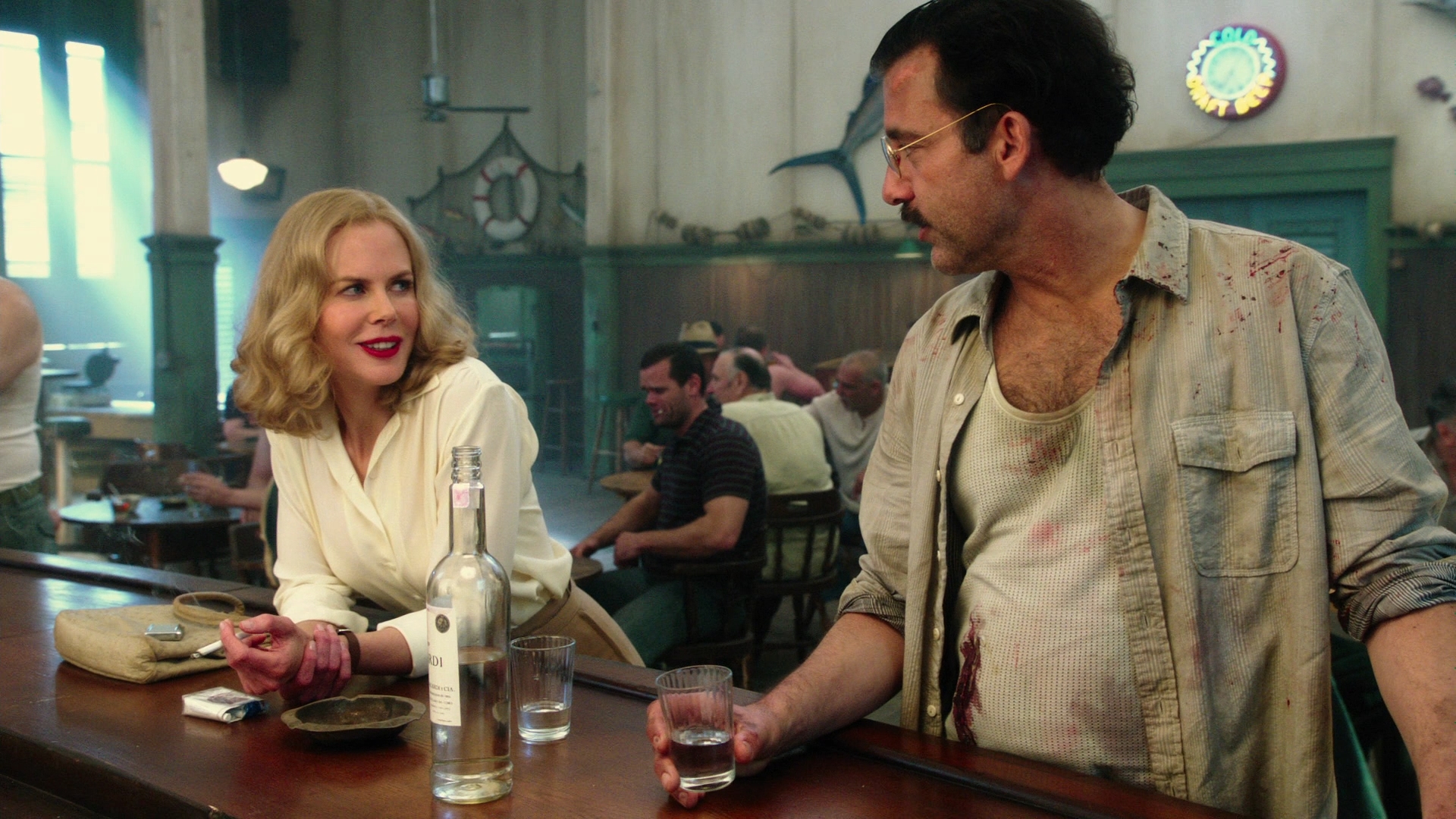 Hemingway & Gellhorn has primarily been shot with the Arri Alexa digital camera and possesses a very standard video appearance for a recent production. The crisp digital cinematography is a little erratic in quality and is a creature of post-production. Kaufman heavily relies on digital embedding his star actors into actual archival footage to simulate historic photos and primitive film. That particular process only partially works, because the green screen work is too obvious in select moments.

Going beyond the frequent reliance on stylized FX to create the reality of the 1930s, digital color grading plays a large role in the film’s finished look. Each locale, from Franco’s war-torn Spain to Hemingway’s residence in Cuba, has a particular color palette. It’s a jarring directorial choice that distracts from the story and picture quality at times.

HBO has encoded the 154-minute movie in AVC, allowing it reasonably generous video bitrates on a BD-50 that average 28 Mbps. Aside from some slight video noise in the first act, there are not any significant compression problems to report. The hint of minor ringing and possibly aliasing sneaks into the digitally-shot production on occasion, but it is very mild in comparison to some other examples on Blu-ray. The brightly-lit image has a tendency to wash out some of the finer facial detail in wider shots, though close-ups show zero indicators that any type of digital noise reduction has been employed.

Hemingway & Gellhorn does not have the perfect shadow detail or constant contrast that is possible with a movie shot using the Arri Alexa, but it does have a reasonably enjoyable picture. Clarity is always its best attribute, but the changing color palette and frequent switches between doctored archival footage and vivid high-definition in the movie is an odd beast.

The soundtrack for Hemingway & Gellhorn is an unqualified winner, both in the technical merits of its recording and the subjective merits of its Emmy-winning score by Javier Navarrete. The 5.1 DTS-MA HD soundtrack is practically demo material, featuring a dynamic mix in perfect fidelity. The typical sounds of wartime envelope the listener in a subtle and clever usage of the surround channels, as Gellhorn recklessly strides to the front lines as a war correspondent across the world. The sweeping, majestic score never hits the wrong emotional note and really bolsters the dramatic events happening on the screen.

Given the frequent explosions going off in the backdrop of the Spanish Civil War, the booming bass will challenge your subwoofer. Dialogue and sound effects are crystal-clear, from the snappy retorts by Hemingway to the beautiful rendition of the traditional folk song, “Red River Valley,” that serves as a sonic backdrop to a couple of key scenes. There is simply nothing to nitpick here, the audio experience is nearly world class and almost worth hearing on its own.

HBO has also provided two dub options, a 5.1 French DTS soundtrack and a 2.0 Spanish DTS soundtrack. Subtitles include English SDH, French, Spanish. The subs are all presented in a white font.

HBO has provided Hemingway & Gellhorn with a few special features to round out the Blu-ray, with the audio commentary being the most important.

Audio Commentary with director Philip Kaufman and editor Walter Murch – A friendly and informative full-length commentary, mostly driven by Kaufman’s insights into the production and the action happening on the screen. If you feel it necessary to delve into the film’s background and production history, this relaxed commentary is a good place to start.

Behind the Visual Effects (05:29 in upscaled 1080i) – The cast and crew discuss the special effects and how they enriched the film’s historical accuracy. Specifically, the process of digitally embedding the actors into archival footage is shown. The movie heavily relies on green screen FX and digital composites to create its historical reality. For a historical romance, Hemingway & Gellhorn would look completely different without modern digital grading.

Making Hemingway & Gellhorn (06:27 in upscaled 1080i) – From casting to costumes to editing, the cast and crew provide a cursory view of the production process. This featurette is simply too short to fully cover a movie of this scale in any depth. A few choice quotes reveal why Nicole Kidman agreed to the project, but overall it is a very superficial examination of the film.

Included in this Blu-ray combo pack is a separate DVD. Strangely enough, the DVD actually features more subtitle options than the Blu-ray.