Veep is that rare bird, a political satire that actually works as an effective comedy. A sophisticated lampoon of our nation’s inner political workings at its highest levels, the talented ensemble cast surrounding star Julia Louis-Dreyfus delivers line after line with sharp timing. Veep is a rapid-fire comedy with no partisan leanings but gets truly funny at times.

Former Senator Selina Meyer (Julia Louis-Dreyfus) ended up in the most thankless job inside Washington, picked for Vice President after a failed Presidential bid. Julia Louis-Dreyfus plays the same shallow character she has been playing for years in sitcoms, dating all the way back to Seinfeld. The rest of the cast is mostly filled out by Meyer’s inside circle of advisers and staff, from veteran comedic actors like Tony Hale to Matt Walsh and Anna Chlumsky. The satire comes at a fast and furious pace as the clueless staff manages the dysfunctional Meyer, obsessed with her two big political ideas, a clean jobs task force and filibuster reform.

Each character is fully developed with their own personality in the cast, often the main source of amusement. Tony Hale is fabulous in his role of Gary as Meyer’s lapdog, constantly within arm’s reach of her and handling all the personal details she forgets on a regular basis. Reid Scott is the slick political operator, Dan Egan, always in it for himself but politically effective in his cold, slimy demeanor. Matt Walsh plays Mike McLintock, the aging veteran staffer that has seen it all in his long tenure with Meyer while maintaining the fiction of owning a dog to get out of extra work.

Veep has a short first season at only eight episodes, but almost all of it entertains in the wacky misadventures of VP Selina Meyer and staff. The writing is witty and the satire pokes fun at the inane inner workings of politicians, a subject ripe for exploitation. The show avoids any connection to current political reality, as the unnamed President is never shown on screen or mentioned by name. He is mostly referred to as “POTUS,” an acronym used inside the Beltway by political insiders. 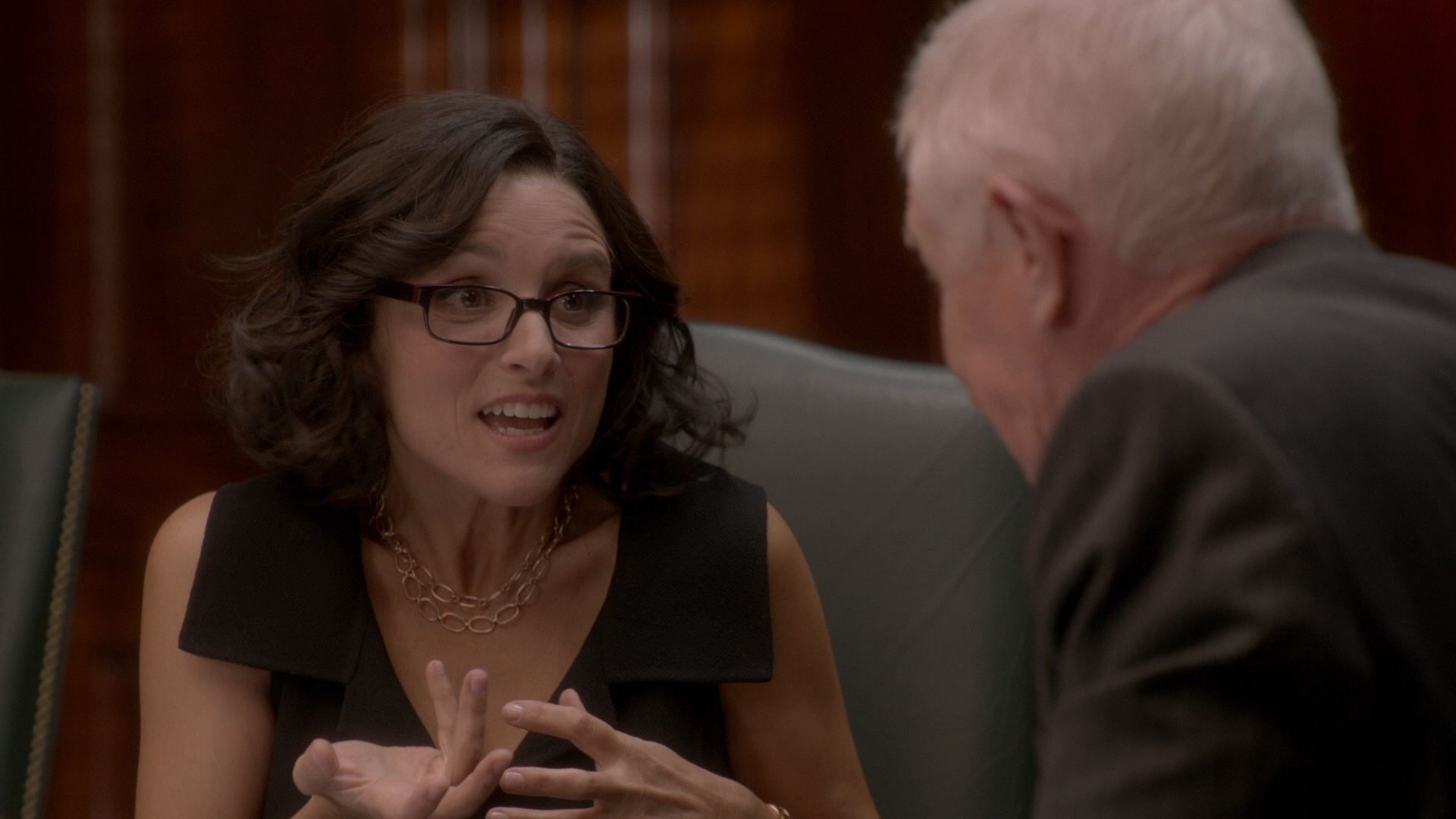 Once again HBO has given one of their shows a top-notch treatment on Blu-ray. The first season lasts only eight episodes, none of them reaching thirty minutes in length, but HBO has generously spread them out over two BD-50s. Encoded in AVC at serious bitrates averaging over 30 Mbps, the digitally-shot production has all the hallmarks of vivid and clean high-definition video.

Aside from the minor quibble that gamma might be a touch too high in the image – producing an overly bright picture at times – Veep has excellent clarity for a sitcom. The transfer has no untoward signs of ringing or aliasing, though it lacks the finest resolution possible in facial close-ups and tighter shots. That may be a sign of minor filtering, particularly on aging star Julia Louis-Dreyfus.

It is hard to make a significant complaint about the largely flawless image, for the quickly-shot sitcom has excellent contrast and solid black levels. There is not a hint of black crush or artifacting to mar the proceedings. If one has seen the bright, vivid style of a modern sitcom shot on video, you will know what to expect with Veep. Only a lack of deep color saturation and sightly washed-out flesh-tones prevent a higher score.

The primary sound option for Veep is a decent 5.1 DTS-HD MA soundtrack. Veep is a sitcom at its heart and almost all of it is driven by pure dialogue, which comes through the center channel in pristine quality. The mix only really comes alive in the few moments when VP Selina Meyer drives through the streets of D.C., in a motorcade full of Secret Service vehicles. As long as one does not expect immense surround immersion or thundering bass, Veep’s soundtrack delivers a satisfying comedic experience.

HBO has included a French 5.1 DTS dub and a Spanish 2.0 DTS dub. Seven subtitle options are on the discs, including English SDH, Spanish, and French.

HBO has loaded up the first season of Veep with an incredible twelve different commentaries. Some deleted scenes and a solid behind-the-scenes featurette round out the assortment of extras, all presented in clean 1080i resolution.

The Making of VEEP (13:24) – A behind-the-scenes look at the making of the series, featuring interviews with the principal members of the cast and crew. Most of the ensemble cast make an appearance. This featurette probably could have run longer with more weight to the analysis, but it is still an excellent companion to the comedy.

VEEP: Misspoke (02:45)– A very short scene with VP Selina Meyer clarifying her remarks regarding Governor Danny Chung, along with an outtake.

Deleted Scenes (24:52) – A series of deleted material, presented in roughly chronological order. They are completely finished and hold up quite well with the actual episodes.

VEEP: Obesity (01:54 in total) – Selina Meyer’s PSA about obesity and an outtake.

12 Audio Commentaries with Cast & Crew – There are two differing types of commentaries provided, all in rather large groups for each commentary. The first group of people primarily consist of the crew, headed by creator Armando Iannucci and several other producers. These are more relaxed affairs than the cast commentaries, providing production details with behind-the-scene tidbits. The second group of commentaries primarily feature the cast, in a much more jovial and lighthearted mood than the crew’s commentaries. Fans will likely be more entertained by the cast’s antics during their commentaries, as they throw jokes around and occasionally ignore the actual episode.

HBO has also included a DVD with all eight episodes of Veep, alongside a digital copy code good for iTunes and UltraViolet providers.