The Hobbit has a voice all its own. Despite the direct connection to Lord of the Rings, this journey into the special effects fueled world of Middle Earth is breezier, light of heart, and when allowed to be, breathlessly energetic. Martin Freeman’s inquisitive looks count for a lot as his interpenetration of Bilbo Baggins leads up the rear, behind a group of dwarven adventurers.

The waters are often muddy for An Unexpected Adventure, a film starting over with the lore, ideals, and concepts of the franchise. Introducing as often as it is reintroducing, Journey shuffles around with dialogue that likes to trail off and insert visual effects for the sake of visual effects. Gollum (Andy Serkis) is given a lengthy sequence in the back half of the film that extends for such length, the danger for the rest of the cast held captive above by goblins is all but lost.

Why are they dealing with goblins? Revenge mostly. Leader of the Dwarfs is Thorin (Richard Armitage), holding a handful of grudges, but none more so than for the dragon that swiped his people’s lands from under him. Cue Gandalf (Ian McKellen) seeing something in a lowly Hobbit, sucked into the adventure to overcome his penchant for the routine. Baggins, if nothing else, can open doors. That’s something.

Despite technically being the fourth film of a franchise, Journey never feels worn down or tired. We have seen these sights before, from the mystical landscape owned by the Elven race to the doors of ominous mountain castles. None of this is legitimately new, yet told with a fresher eye, one a little more in on its game. Conceptually, the film is more playful, a lighter Gandalf, snippy dwarves, and weary Hobbit excellent narrative fodder. Howard Shore’s score captures both the boldness of Lord of the Rings and the necessary meeker vibe the film needs to stretch its legs.

This is a packed film, the set-up for adventures yet to come. In most cases, one can excuse the excess of Peter Jackson as necessity and expectation. This is a director who stretched King Kong into a near four hour spectacle, coming in with little surprise that the breadth of detail for Hobbit will be spilled across three films. Why not then take the time to bulk up the rather stout stock of characters that barge into Bilbo’s home?

That is the trick with adaptations, finding a balance between the needs of the cinematic format and those of a novel. Jackson struggles here. This is too often fan service and less of a film for it, over eager like an excited child to punch it all into the script instead of sitting back and considering condensing materials. This will be a near twelve hour escapade before it is over, all stretched out from a single book. Part of it is the in-thing of Hollywood, breaking up pieces to stretch out fan excitement whether deserved or not. The other part is Jackson’s sweeping enthusiasm for wide angle shots of New Zealand.

Unexpected Journey eventually finds its footing, placing the adventurers in the midst of a goblin horde that screams thrills and technological prowess. The escape is a genuine highlight that drops (literally) into a band of orcs. The film built itself up to this point, a sometimes sluggish run to a non-finish, but what a crazy non-finish it is. 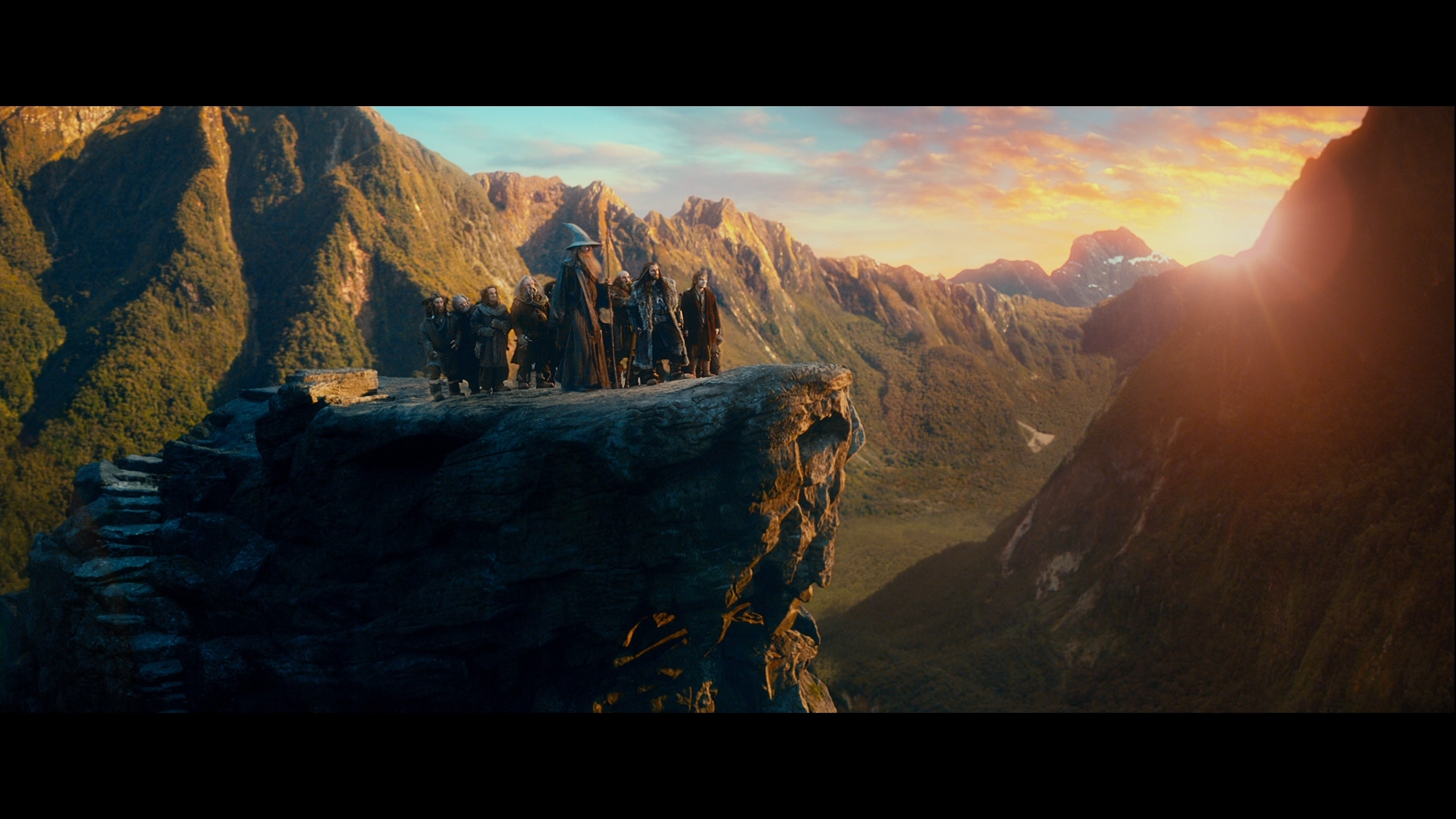 Controversially released to theaters at 48fps, the Blu-ray… is not. Instead, The Hobbit’s first appearance on the format is certainly cinematic in its scope, and stunningly beautiful to boot. The Red Epic pulls its weight in digital delights, with superior sharpness that dresses even the dimmest scenes in fidelity. That is one of the challenges, maintaining scope within the visuals even as the moonlight reigns down, or torches flicker. That is of no concern here.

Much of the finest detail is held within the environments or costuming; facial detail can quite often be dry, or in the case of Saruman, smoothed out completely. One can assume that is to make Saruman appear gentler or younger, but the effect simply appears smeared during his single scene. The rest of Journey is wonderfully natural and exquisitely precise, gifted with outstanding clarity that is never clouded with noise. A few years of technological evolution has created a film that in many ways, trounces its storytelling sequels.

What has changed? Smoother transitions into a multi-faceted color palette, and richer black levels. Likely seeking to compensate for the dimming of 3D glasses – and to better suit the tone no doubt – Hobbit is brighter despite the tinge of warmth that can infect the whites, and deeper to better sell the depth. Most striking is a sequence of rock monsters, done at the peak of night in a storm, and never once do the black levels lose their oomph. The black levels weakest moment comes immediately inside the Baggins’ home as the Dwarves rush in for the evening. Even then they still carry the needed bulk to thrive.

Then, those colors strike. While always veering warm, the sheer assault of greenery from forests and especially Baggins’ homeland, are astonishingly well done. These sights are bountiful in saturation, with sharp flesh tones too. Most interiors carry the familiar digital cues of orange and blue, the goblin lair being the most notable. These scenes however are no less striking in their visual energy.

Intended for 3D, the glasses blow up the realm of Middle Earth, sending layered trees into the foreground and background, objects tossed into the viewers face, and expanding those glorious views of mountain ranges. The film volleys 3D towards anyone watching, using it as a tool to enhance, not take away. Some of the more gimmicky material, say Baggins’ buttons popping off towards the lens, are not a distraction. They better suit the tone. Likewise, all of those shots with Gollum’s massive eyes popping out towards the lens are better suited to the format.

The highlight, undoubtedly, comes late during the rock monster brawl. Despite the darkness, the sheet of falling rain pops from the frame while the camera dizzingly points upward and downward to make the scale visible. All the while, chunks of scattered rocks collapse through the frame. Hobbit’s use of 3D has rare downtime, namely early on as the characters are routinely introduced. While the home is framed in a way to sell the length of the hallways, general chatter is rarely offering substantial depth. The rest of the film is a 3D marvel.

Note: The 3D film is split across two discs, 2D on one.

No different than the booming power of Lord of the Rings, this smaller in scope story never feels as such sonically. From the outset as a dragon attack rips flames through the soundfield and mauls structures, the film is intensely active. Positional dialogue stretches wide where appropriate, making both dialogue and action feel fuller.

None of the action scenes miss as was probably the expectation, a DTS-HD mix with plenty of weight. Rock monsters feel enormous, trolls hefty, and goblin kings frantic as they all march around. Tracking audio is precise, a pleasant pinnacle of uber-budgeted Hollywood sound design. Again, and trying to avoid redundancy, the rock rumble is a flawlessly balanced piece of absolute spectacle, swinging rocks and super punches while maintaining balance with the storm plus dialogue.

There are those softer moments as well, like insects buzzing about inside the troll cave, or waterfalls of all sizes in the kingdom of the elves. Howls of animals space out, and the echo effect of Gollum’s lair is remarkably lifelike.

Extras? Not much, but what is here deserves a watch, or namely, the video blogs do. Die hard fans have probably already seen Peter Jackson’s online work, preserved here over 10 sections with two hours of content. While these never steer too far into the guts of the film (avoiding pre-release spoilers and keeping a promotional tone), they remain a nice accompaniment. They also leave little doubt of potential future editions that will go deeper.

Home of Middle Earth showcases New Zealand briefly and a bunch of trailers finish off an additional disc housing only extras.