The Twilight saga is 608 minutes long. Ten hours. Ten long, arduous hours. For Breaking Dawn, the goal is closure. The Cullens stand on one side of a conveniently open field, the Volturi on the other. Finally, this series can blow up a bit with a bit of inter-species war.

Oh sure, heads are decapitated in a staggering display is violence that skims the PG-13 as close as it can go. Dakota Fanning is ripped apart by (still) painfully rendered CG werewolves. The hell spawn of Edward and Bella manages to stay on top of wolf Jacob even as he rolls around, snapping the head of a vampire. Side characters clash, the Earth cracks, bodies fly, people are burned, and wolves are smashed.

See, Twilight fiction is stupid. It has been stupid since the first film. Not quite, “Jesus tap dancing Jupiter” stupid like Breaking Dawn: Part 2, but stupid nonetheless. Maybe the elements were always there to prepare the audience. Edward (Robert Pattinson) and Bella (Kristen Stewart) are needlessly vampires. Their existence as supernatural beings is completely irrelevant. The fight proves it because it never happens.

Instead, the $120 million budget was spent on a vision. Not a real fight, a vision. A needless, pointless, 10-minute vision of what could happen. Stephanie Meyer never cared to craft a universe, just a romance. To avoid being plopped next to grocery store romance novels with Fabio on the cover, she tossed in some BS about sparkling vampires and aimed it at teens. They’re suckers for this stuff, and the marketing was genius.

Edward was never in danger. Bella was never set to be killed. Trying to convince yourself otherwise is forcing the drama that never plays out on the screen in your own mind. What is the point? Why is there any need for a shadowy organization of Italian vampires who read dusty tomes if they are just going to WALK AWAY? Seriously. They WALK AWAY. It’s like, “Oh, we have no purpose in this mythology. Sorry for the intrusion. We will be going now.” You don’t get to do that, not after 10 hours.

The film invalidates everything that came before it, as if Twilight ever had anything to offer in the first place. All of the drama is for naught. The sole tension was a grisly birthing scene at the end of Breaking Dawn, all but a memory here in Part 2. This film is a waste that goes nowhere to tell us that Edward and Bella are meant for each other… the same message the previous four movies made clear. No wonder so many were on “Team whoever kills one of them first to help her make up her damn mind.” That would have made things interesting.

And still, that is not the dumbest thing Part 2 does. Nope, that comes back to spending incalculable money on a computer generated baby. One can only picture the production meeting where someone stood up and said, “Sir. There are no babies left on Earth. We must create one.” Then, some executive checked off “computer generated infant” on a financial sheet.

Bear in mind, this is just a baby. Despite the weird creation of human/vampire sparkly blood, this is remains a perfect human baby. Pure human. It has no special traits. The only thing necessitated by the script is that is had to reach out and touch Bella, so animate an arm, use a puppet, or anything. Millions are spent on the entire package instead.

Maybe they did not want a child growing up only to learn it was a focal point of a Twilight film. The shame of being in a movie with the line, “You nicknamed my daughter after the Loch Ness Monster!?” would have been too great for any child to bear. Watching it was bad enough. 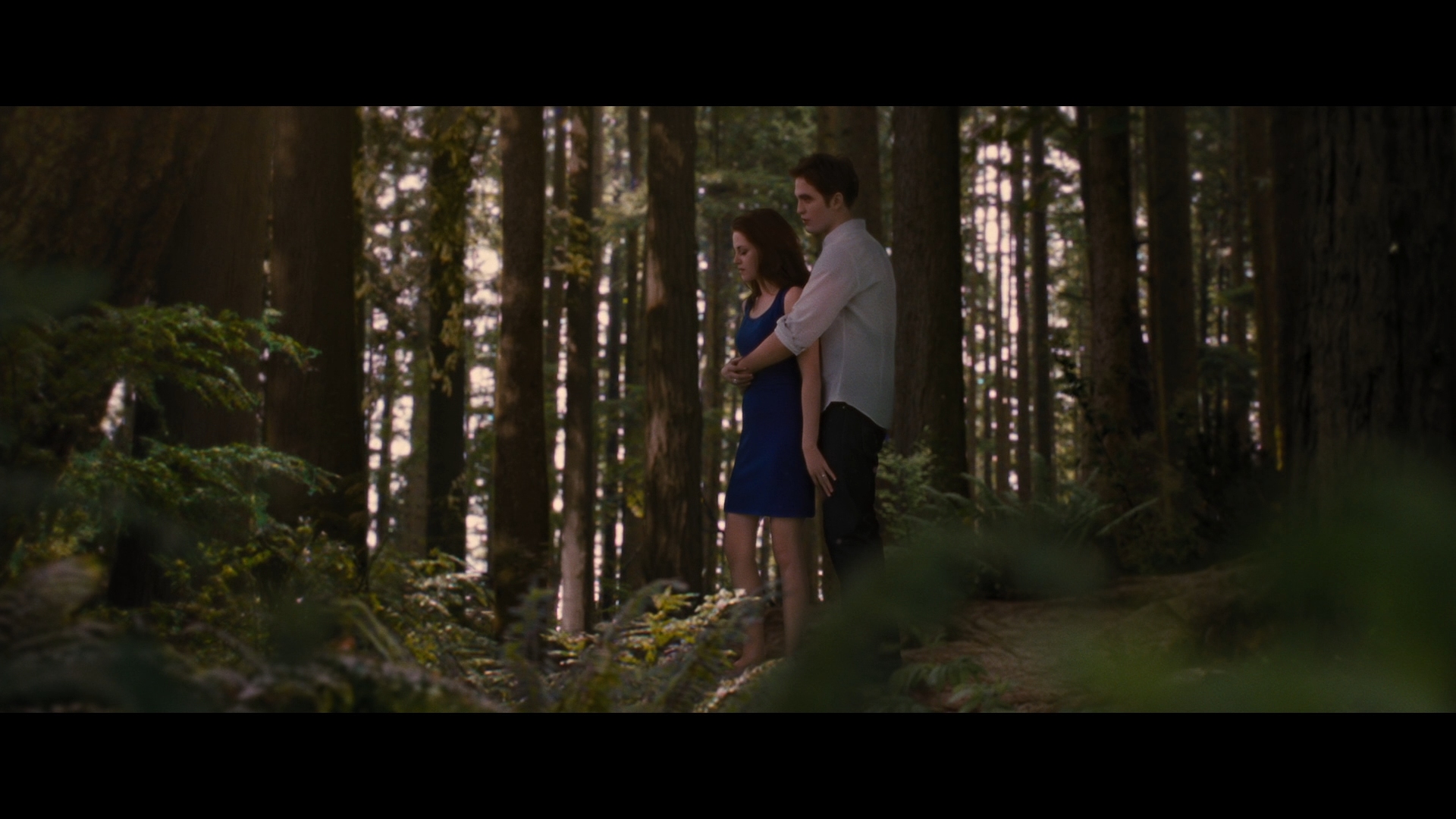 If nothing else, the Twilight films have been lookers. They carry a consistency in color, density, brightness, and more. For the most part, so does Breaking Dawn: Part 2. The forests have healthy greens, vampire skin is pale, and wolves are earth tones. They continue to feel heavy and full, with minimal saturation that makes the style impressive.

What is not so hot is the outrageous level of smoothing used, worse than what was seen in Part 1. Medium shots flatten into the realm of digital. Close-ups swam with digital artifacts, remnants of the processes used. These are far too obvious to be sourced from the AVC encode which is hefty. Bitrates are high, and disc compression is clean. There are no issues with long shots of trees, no shimmering, or aliasing. The general sharpness makes the smoothing even more abhorrent.

Maybe the inconsistency of it all makes the material so jarring. Some close-ups look great, so this is not merely a methodology used to make Bella appear less human as she sits in her new vampire state. It may be intentional, but it is hardly logical. Most of the actors spend their time looking like plastic models. The freakish CG baby is the most realistic thing here most of the time.

There are other problems, namely black levels that never seem to slip into a groove. Too often the imagery can appear faded into blue or gray, despite some high points that sink deep. If nothing else, shadow detail preservation is precise. Grain management is strong too, one spike handled well. Not that it matters much when the end product often looks little like film in the first place.

At five minutes, Bella needs to feed. She zips through the forest with the wind brushing past here and animals calling. The DTS-HD mix picks it up beautifully. Ambiance is consistently strong in the forest, and really sparks to life at 47-minutes during a brief jungle vision.

Breaking Dawn will rely mostly on general ambiance until the action spikes. The major fight is an aural dazzler, with winding punches traveling through the stereos, and bodies whipping into the surrounds. Punches take hold of the LFE, and the splitting of the ice creates a fantastic tremor. Balance is great, and positional activity is heightened to the peak of the series. Despite the superfluous nature, the audio makes the scene a showcase.

Director Bill Condon delivers a commentary for this final piece, but it pales in comparison to Forever Filming. Split into seven parts, this 93-minute documentary takes each major sequence or effect and breaks it down… even the CG baby. Two Movies at Once focuses on what it takes to shoot a split movie in two parts. A music video and some trailers are left.