Written and directed by Paul Thomas Anderson, one of the few true auteurs left making movies in Hollywood, 2012’s The Master is an uneven attempt at deconstructing Scientology’s sordid early history. Anderson avoids directly naming the Scientology movement or its founder, L. Ron Hubbard. In place of them, thinly-veiled fictionalized versions are used to tell a dramatic story about the cult’s founding in the years after World War II.

Freddie Quell is an alcoholic World War II veteran, struggling to cope in the post-war period. Portrayed in a showy performance by Joaquin Phoenix, Freddie is a tough character for the audience to empathize with as we see his story unfold in the 1950s. Prone to erratic outbursts and obsessed with sex, The Master is ultimately about Freddie’s journey as a mentally-scarred man under the guidance of Lancaster Dodd, referred to as “Master” by his followers.

Lancaster Dodd is powerfully depicted by Philip Seymour Hoffman, once again confirming his status as one of the world’s great actors. Quell stumbles across Dodd and immediately becomes a participant in Dodd’s movement, largely depicted as a growing cult around the writer. Dodd uses pseudo-scientific language and a charismatic personality to compel a small group of dedicated believers around him into accepting his beliefs about past lives and a strange ritual called “processing,” which vaguely resembles hypnosis.

What does not work in the end is the somewhat dream-like feel of the story, which in Paul Thomas Anderson’s typical style is once again a densely-layered sequence of events that leaves more questions than answers. One gets the feeling that Anderson left much of the story on the cutting-room floor, as his movies have easily surpassed three hours in the past without much effort.

The Master is a streamlined, svelte affair for him, as it breezily jumps from scene to scene. There is something to be said for the magnetic intensity between Hoffman and Phoenix on the screen, especially as Dodd puts Quell through elaborate psychological tests of will meant to break him. Joaquin Phoenix uses a number of repetitive physical tics for the role of Quell, though it seems forced and unnatural much of the time.

Anderson pulls no punches in his evaluation of Dodd’s movement and its followers, though some of it has to be read between the lines. The lone voice of skepticism in the movie against Dodd and his group gets quickly dealt with by Quell, through physical intimidation and violence. The Master has an interesting set of characters and wonderful acting performances, most notably by Hoffman, but in the end the parts are greater than the whole. 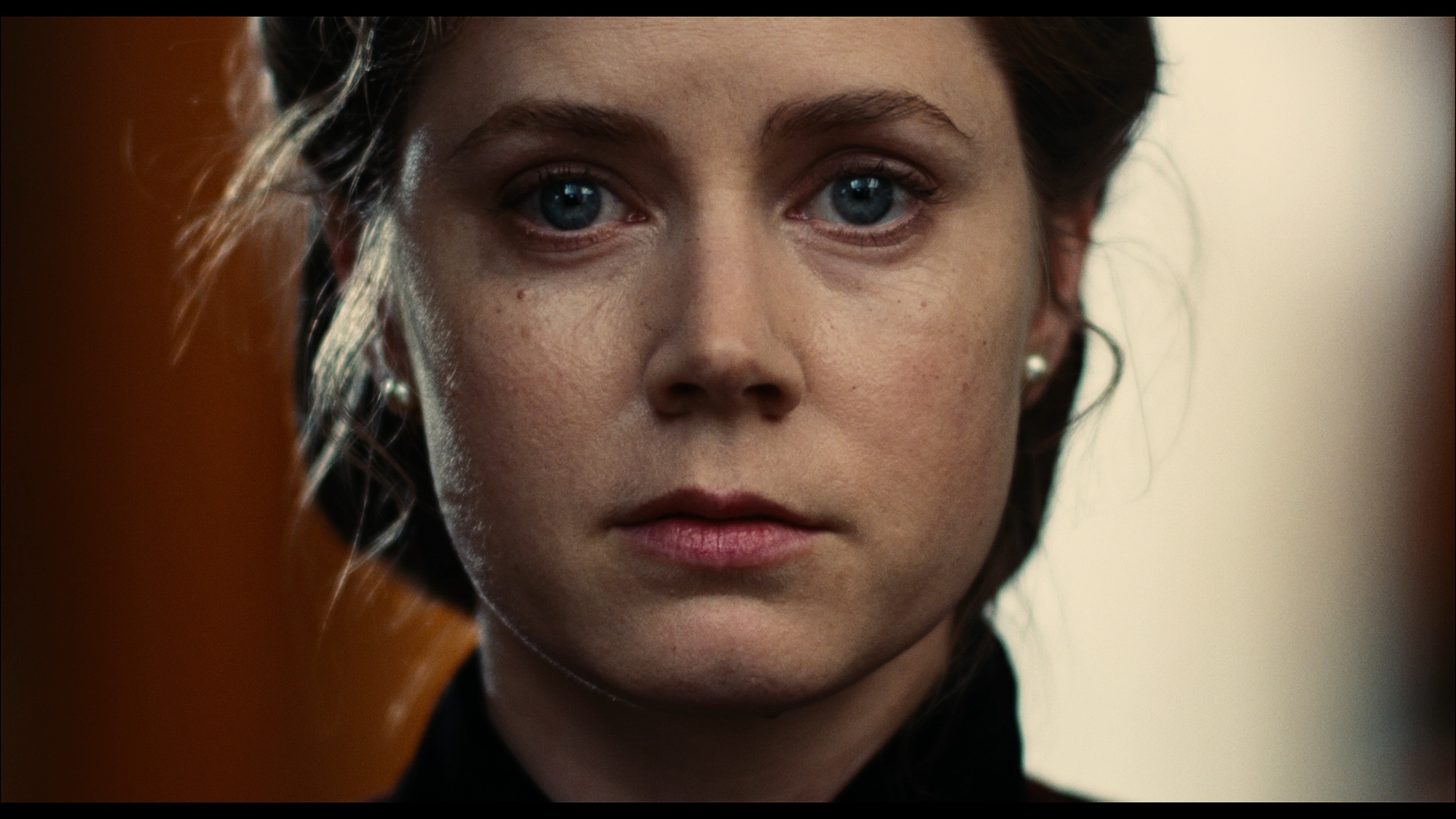 For the first time in the Twenty-First Century, Hollywood has produced a movie shot on 65mm film. Once the top choice for high-end movies in a bygone era, the expense of 65mm ultimately drove Hollywood to vastly prefer using cheaper 35mm film. The Master’s stunning 65mm cinematography by Mihai Mălaimare Jr. looks absolutely beautiful in 1080P.

Its stark imagery and careful composition produce rarefied picture quality, which shines on the largest displays and projection screens. The Master is easily one of the top-looking film-based movies on Blu-ray.  If film wants to hang around in this new era of digital video, the 65mm variety needs to be more employed by Hollywood.

The Weinstein Company has encoded the main feature using the AVC video codec, at an average video bitrate of 24.72 Mbps which easily handles the fine-grained picture without a single flaw. The Master runs a total of 137:30 minutes, framed in the standard 1.85:1 aspect ratio. The transfer approaches perfection from a technical standpoint. Only the brief and limited appearance of ringing in a few shots indicate any obvious digital manipulation in post-production. The lack of halos and DNR in the transfer produce a completely film-like experience for The Master.

The most impressive trait of the image is the stupendous focal depth, adding a sense of dimensionality that only the best Blu-rays can match. Deep, inky black levels support the rich color palette, draped in shadows when Lancaster Dodd forces his will on his followers. Make no mistake, this is a Blu-ray that clearly shows the vast quality and potential of modern 65mm cinematography. Which makes it a true highlight for videophiles seeking out the best possible video quality. Extraordinary detail in the razor-sharp photography is complemented by an excellent and vivid contrast.

The Weinstein Company has provided a single audio option for The Master on Blu-ray. The 5.1 DTS-HD MA soundtrack has a clean presentation of the score and is suitably well recorded, befitting a major new Hollywood release. Technically, the mix is spacious and engaging for a movie driven by dialogue. Fidelity is top-notch in the more delicate moments, with pinpoint imaging of the Foley effects. Actual dialogue is a tad soft in volume, particularly during some of “processing” involving Freddie Quell and other characters. The extreme dynamic range on the soundtrack will require some viewers to turn up their audio levels.

Where the audio goes slightly off the rails is a more subjective judgment regarding Jonny Greenwood’s score. Greenwood, a member of Radiohead, demonstrates the mistakes of a composer whose main job is something else besides composing for the cinema. The musical flourishes early in the film call too much attention to themselves and distract from the drama, instead of supporting the action. There is a touch of atonality in the score that doesn’t quite fit into The Master’s 1950s period setting. The actual music from the period used in the soundtrack, such as songs by Duke Ellington, add a more appropriate tone to a film set after the end of World War II.

Optional subtitle options include Spanish and English SDH. Both are presented in a white font.

Back Beyond (19:59 in 1080P) – A compilation of outtakes and additional scenes presents them in an unusual manner. Instead of each scene presented on its own, there is a narrative of sorts and Jonny Greenwood provides additional scoring. The deleted material turns out like an extended music video, edited together with a story to tell. It’s one of the more creative special features put on home video in recent memory.

Unguided Message (07:59 in 480i) – A featurette comprised of behind-the-scenes material from the set of The Master. Its lack of being in HD, and featuring nothing but incidental audio captured from the set, make this featurette a superfluous inclusion.

Teasers / Trailers (16:30 in 1080P) – Nine separate promos and trailers for The Master are provided, including the original theatrical trailer.

Let There Be Light (58:06 in 480i) – Probably the special feature that will generate the most excitement amongst collectors. John Huston’s 1946 documentary about shell-shocked World War II veterans is presented in its entirety, though the picture quality is quite rough. This documentary film follows 75 U.S. soldiers who have sustained debilitating emotional trauma and depression from their experiences in the war. It is certainly a compelling feature to watch for those interested in the manifestations of Post-traumatic stress disorder (PTSD) and the growing awareness of mental health problems in the 1940s.

Color Bars – A normal test pattern is provided for those who might want to calibrate their display with the proper color filter.

This package also contains a DVD version of the movie, a digital copy only redeemable on iTunes, and a simulated vintage postcard featuring Lancaster Dodd.