Wreck-It-Ralph is bridged with grand video game references. As we begin, the dim arcades glow with tube screens sourcing the only light. Ralph (John C. Reilly) explains his dire circumstances as a bad guy archetype to a support group of recognizable video game villains. He wants the spotlight, the glamor, and the medals donned on his heroic counterpart, Fix-It-Felix (Jack McBrayer). But, Ralph is a designed antagonist who trots to work in the ultimate gaming playland. Dig Dug dives underground, Q-Bert searches for work, sports characters seek their next game, and Sonic the Hedgehog ditches PSAs.

It’s not long before Ralph finds himself leaving his own game, an act known as “Turbo-ing” in this world. Think Toy Story as characters are able to leave at will through the electrical cords when humans go home, but the rules state they can’t interfere elsewhere. That’s what Ralph does, sucked into “Sugar Rush,” a kart racing game that’s sweet enough to send a diabetic into shock merely by looking at it.

It’s there that Wreck-It loses some of its oomph, pushing more candy references, immature (and enjoyable) humor from a glitched character known as Vanellope (Sarah Silverman), and a visual style that is all kid’s movie, not a video game. The movie’s building of character is all stock material, salvaged by its infectious adorableness and immense color. Every one of those candy textures looks delicious too. It is hard to look away, and you’ll be damned hungry for something with frosting on it when it’s over.

As engaging as the writing can be, the film feels like it’s losing its way, disconnected from where it began. Adam Sandler is soon to star in a comedy based on Candy Land and it feels like Wreck-It got there first. While sometimes digital in its gags, this comes across as less video and more board game. There are more zingers left to barely legible graffiti than in all of “Sugar Rush.”

Is it fun either way? Absolutely. The sweetness, pun wholly and enjoyably intended, doesn’t suddenly evaporate from a loss of marketing focus. Dual scripting from Phil Johnston and Jennifer Lee does not miss a chance at character, and a hidden villain gimmick is clever if probably obvious to the older audience.

By the time Wreck-It comes back into the fold for a book-end, the closing credits are rolling, blown up pixel art in full display as they tell the story of how this world continued. There’s evolution in the design, where the beefy, modern “Call of Heroes” is shown in vintage form, growing into the popular beast it would become within the game world. With its last gasp, Wreck-It crashes with a kill screen pulled right from Pac-Man. It’s a glitch, the game has broken, and the audience goes home satisfied, at least those who get the reference. 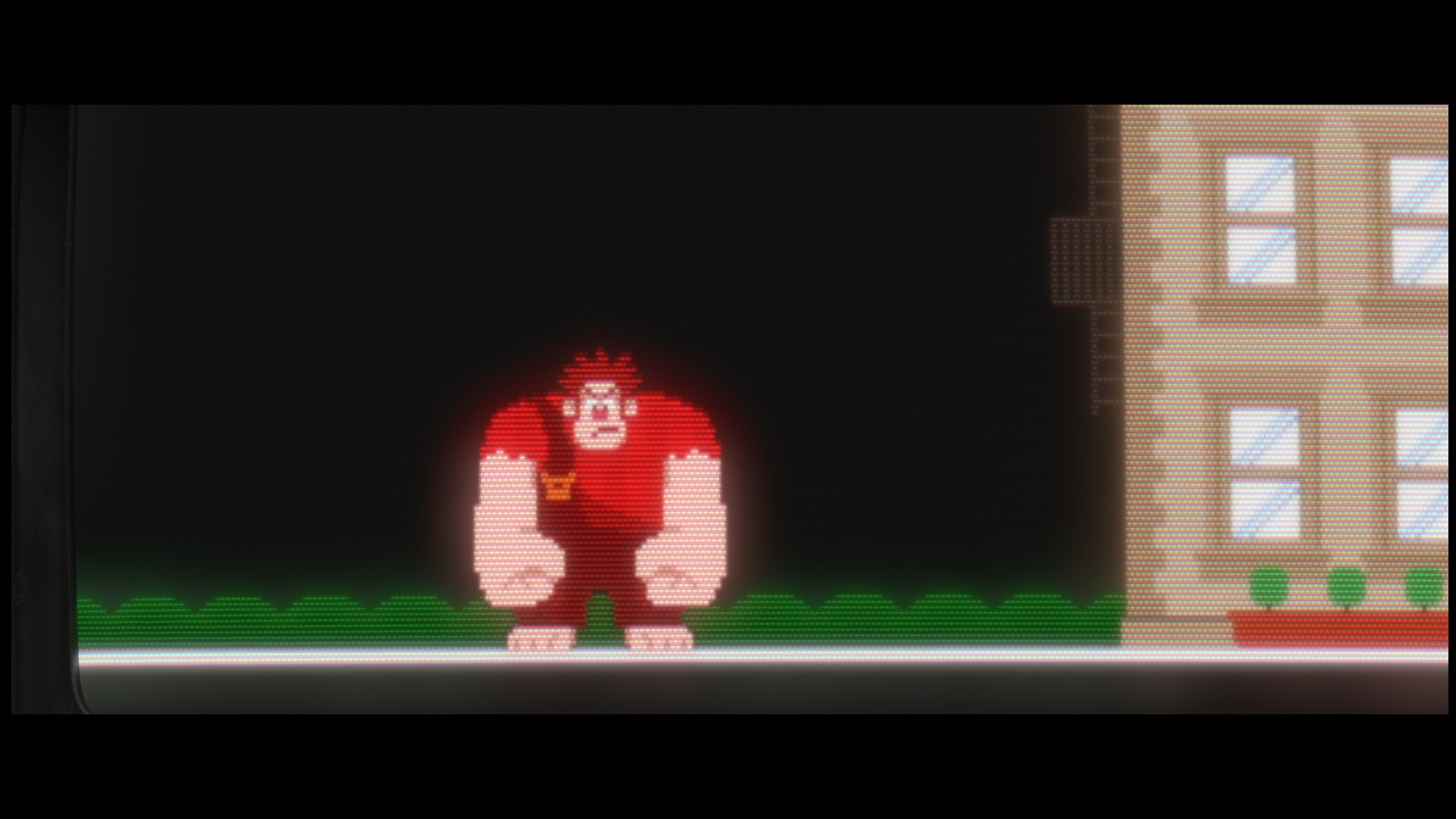 Wreck-It Ralph is a truly beautiful film. The soft glow of CRT monitors adorns the early frames, the slick pixel art is rendered with perfectly replicated scan lines. On Blu-ray, there are no artifacts, aliasing, or shimmering elements to get in the way. It looks like the purest of all retro video game images.

With a modern spark, the film begins to render these characters more dimensionally, and with flawless texture. Ralph’s tattered flannel shirt is comes through even down to stray strings. Armor on the soldiers of “Heroes Duty” is slashed and reflective. Individual characters have their hallmarks, including a smooth looking Bowser.

All of that is great, yet pales in comparison to the world of “Sugar Rush.” Outstanding and flawless texture is everywhere. The sugar coating is brilliant, and definition soars. Every type of candy is unmistakable based on visible texture, sourced by both the animation and the clarity of the compression. Disney’s AVC encode is perfection.

That does not even touch the color which is soaked in primaries, pulled out, and then soaked again. The variations in the environments use almost every hue imaginable to the point that even the brown chocolate undergrounds are vibrant. Black levels push the depth and drown out flatness, so even those dimmer scenes are allowed to breathe. Remarkable.

Do not forget the 3D elements though, which while not always finding themselves deep, the peaks are enough to warrant a viewing. You do not notice how many people point in this movie, but when their fingers are waving at your face in 3D, it’s hard not to pick up on. Generally speaking, characters have a sense of dimension, a nicely rounded quality that comes through on Blu-ray. Small details, like moisture on the lens during the early “Heroes Duty” scene or post-battle debris, are great. The opening shot peering down through the glass of an arcade cabinet is effective too.

Ralph’s arrival in a candy cane forest is a moment where the disc can show off, the scenery stretching for miles into the distance. Angles take on a skewed approach to accentuate height for added effect. The final race sequence is full of shots low to the ground or others that favor an approach to ensure objects whip by the lens. A lot of it is a little fast for the full effect, but no less spectacular in motion. Overall though, it feels just a hair reserved to be ranked amongst the best 3D Blu-ray.

The first huge sequence to put this DTS-HD 7.1 mix to the test is the shooter. “Heroes Duty” pushes plenty of heavy LFE through the music, and pans around gunfire like it should. Enemy bugs buzz around the soundfield fluidly to keep the sequence active, and this is in great balance with the dialogue.

The kart racing is fun too, including revved up engines and panning vehicles. Obstacles like rolling gumballs will add in low-end heft. Special credit for the use of stereos too, which excellent panning to the sides for dialogue or other activities.

General stuff? That is solid too. Ralph’s smashing fits are substantially weighted in the subwoofer, and explosions from the Coke/Mentos volcano are hearty. Arcade ambiance is light yet not wasted. Music fills up the soundfield naturally. This is an in-the-moment mix that works.

The 3D disc only contains the Oscar-winning short (deservedly so) Paperman, and in 3D. It is shared with the 2D versions as well.

On the standard 2D disc, you can connect with Bit by Bit, a look into Ralph’s world, the characters, and their designs. Some deleted scenes (14-minutes worth) offer an optional commentary, and faux commercials for the fake games seen within then movie are charming. Some trailers and intermission fun when paused round out these slim bonuses.