Six American diplomats escape to the Canadian Embassy through an uncovered back door. Rioting Iranians storm the US embassy in the front, taking the unlucky remaining diplomats hostage. Our CIA decides the best way to rescue their own is to make a fake movie… and it worked.

The story almost seems too clean for Hollywood, something a writer drummed up after peering through uncovered documents and spilled paperwork. Yet, CIA operative Tony Mendez actually made this work as 1980 came into harsh reality during the Iranian Hostage Crisis.

Argo spins up a bit of the Hollywood charm, a sci-fi obsessed industry reeling from Star Wars and inadvertently creating an opening for intelligence operatives. Cue a phony director, a stack of producers, and a ludicrous script that existed for nothing else other than to exploit audiences. All they needed was a location that just happened to be in the midst of an uprising, and awfully near the Canadian Embassy.

Argo is ingenious with its information dumps, rapidly firing off pits of material to close down loopholes, fill gaps, and set character. Tony Mendez (Ben Affleck) is first seen alone in a tattered apartment, separated from his wife and son. Sixty or so days into the situation, a TV showing of Battle for the Planet of the Apes sparks an idea, and one series of classified documents later, we have history.

Breathlessly paced with superior set-up and execution, Argo is often unrelenting. The prevailing sense of fear and possibility this entire plan will collapse is always real. This is an underground story without mainstream face time, so details still feel new and inspired, or rather, filling in the pieces. The escape was celebrated, the actual methodology was not.

The film fishes around and settles into a thriller categorization, although peaks with drama or comedy as needed. Hollywood is played for laughs with its absurdities, Alan Arkin’s Lester Siegel a veteran of the scene who pushes the project through the usual channels in improbable time. He becomes a backbone for the entire concept, a fake movie producer who knows what makes it all tick while filling in the small details.

Mendez’s emotionless style is surefire without a sense of the human element. The captives are split on the plan and distrust Mendez, worried their new, given identities as part of the film crew will crumble under pressure. They are imperfect and prone to failure, made obvious as they struggle to cope with the stress of a restrictive life inside a protected Embassy. Adding in the split identities is a certain clincher towards a mistake.

Like most true stories in film, Argo closes with event specifics, but also relevant documents and photos for comparison. The authenticity is startling. Camera compositions (and special effects) were designed around reference photos with incredible attention to detail. Affleck directs and stars, both sides of the cinematic coin mastered at this stage of his career. Twenty years ago if you said, “That guy from Mallrats will make the best CIA movie of the 2000s,” you would have been called crazy. If you were that person, congratulations on sticking to your beliefs. 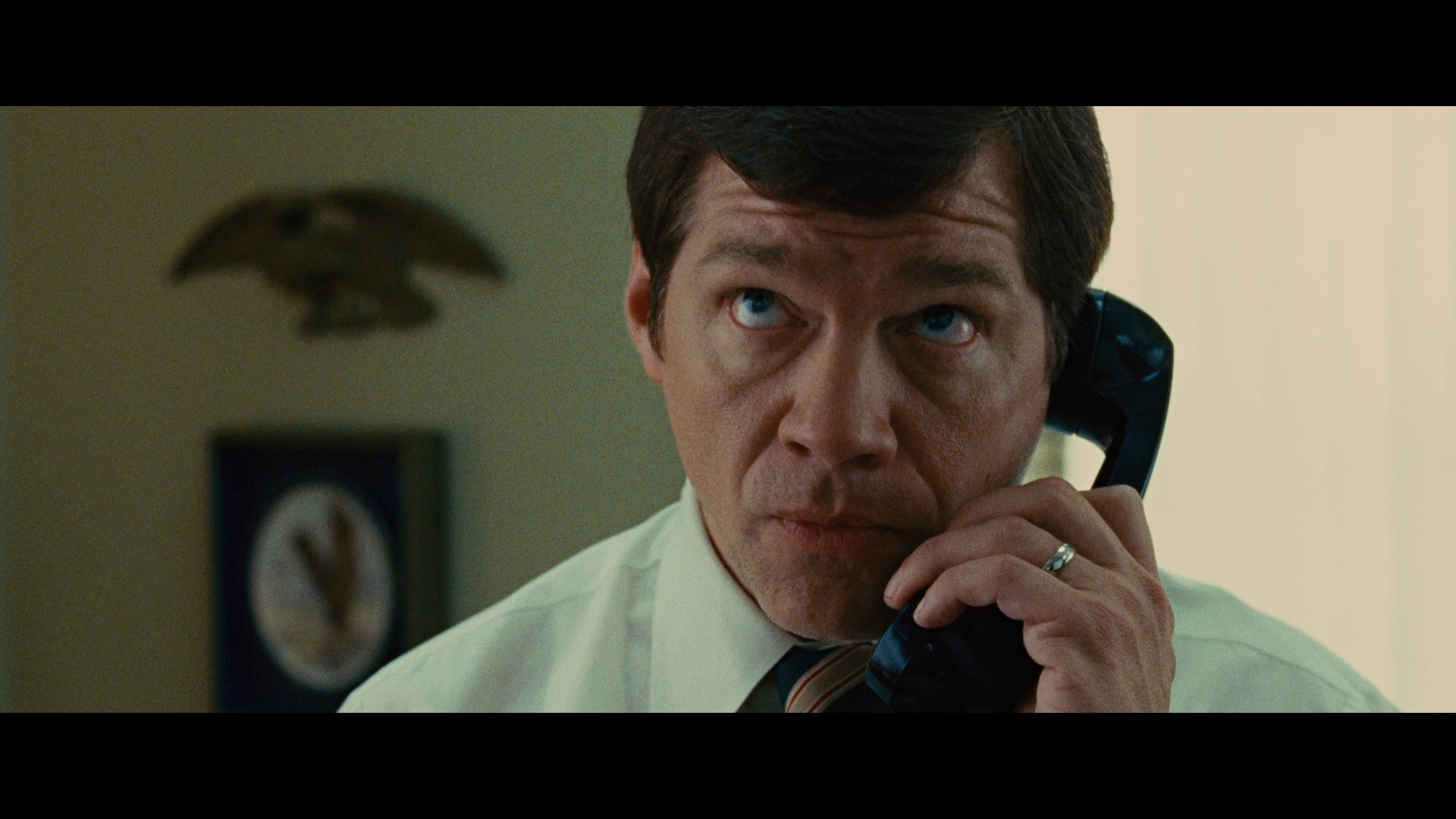 Affleck made some interesting calls with Argo, from 8mm (rare) to 35mm, to blowing up the frame for added grit naturally. The call comes in for Warner’s AVC encode to step up and rarely does compression keep an image this complex together. Fluctuating grain is the thickest challenge, backgrounds and actors in the midst of heavy, overblown grain with excellent results on the digital side. Banding is absent, and film looks like film. Grain management is superb given the intentional style.

There is also a sense of the vintage. The first shot of the Warner logo brings back the trio of red spheres that stood for the company back then against a pale gray backdrop. Black levels exist post-logos, the first shots of a rioting crowd picking up the needed depth. Blacks will come and go, passing off to a muddier gray that feels appropriate for a period piece. Style comes first for Argo, overpowering depth on occasion.

Most will find Argo soft but not lacking in fidelity. Blowing up film stock will always cause a loss of apparent resolution, although here it is never much of a detriment. No one will layer Argo with consistency compliments, while still standing up for its texture. Despite the grit, clarity can be high, layers of facial detail and superior production design always on display. Bright lighting brings out further elements to gawk at.

Like everything else here, saturation is entirely scene dependent, although speaking generally, most primaries are held back from their peaks. Few hues escape a gray overcast. Flesh tones are pure, and scattered shots of wailing protesters force the issue with different clothes. Jackets and such are determined to show off some depth. Most general interiors, especially of the CIA, are dulled with blues, Hollywood slightly more glamorous with its warmth. Most of the film finds a middle ground.

Deep, angry crowds begin a solid audio presentation, chants coming at the listener from all angles. That moves into a heavy, whirring helicopter blade that tracks flawlessly through the soundfield while adding an LFE kick. Argo’s many offices, while not as weighted, still handle the stream of tube TV speakers as the camera pans while phones ping in the distance.

A few rounds of gunfire are pleasingly powerful on both ends of the aural spectrum, and the dazzling chase finale has jet engines firing up while tracking police vehicles through the soundfield. Dialogue on the low end can struggles to raise itself up to an appropriate volume level, a rather minor quibble for such superior design.

Superlative is the only needed adjective for Argo’s thick bonuses. A commentary from Ben Affleck and writer Chris Terriro is actually one of the lesser features, and not because of a lack of quality. It is merely overshadowed by the plethora of information elsewhere on the disc. Warner’s picture-in-picture mode pulls from other features on the disc (mostly), so chances are you will be better off digging through the menus for more complete access.

Rescued from Tehran brings the real life hostages into the fold to tell their stories with great production value. Absolute Authenticity deals in the filmmaking side and ensuring few pieces were dramatized for the film. The CIA and the Hollywood Connection pops in to detail the combined efforts, including make-up man John Chambers’ government work.

Escape from Iran: The Hollywood Option is a superb piece nearing 50-minutes that recounts the days and events leading up to the rescue. Filled with vintage footage, news reports, and interviews, this is perfect for those wanting a deeper study. A cast discussion post-screening is filled with clips from the movie, and Tony Mendez on Tony Mendez lets the now retired CIA operative speak on his career and this story. The Istanbul journey peers into the location shoot and the challenges it presented. Everything here is worth watching, and none of it feels like fluff.