Hailed by some as Woody Allen’s best movie in his storied directorial career, Hannah and Her Sisters won three Oscars upon its release in 1986. Featuring a brilliant ensemble cast headlined by Michael Caine and Mia Farrow, not to mention Barbara Hershey or Dianne Wiest in her Oscar-winning performance, Woody Allen deftly navigates the loves and lives of three sisters over the course of one year. There are simply too many big names to list in the all-star cast, from Carrie Fisher to bit-players like a young Julia Louis-Dreyfus.

The three sisters and their sibling rivalry are the core of Hannah and Her Sisters. Hannah (Mia Farrow) is the respected eldest daughter of show-biz parents, married to Elliot (Michael Caine). She is the sole stable member of the family in playing a supportive role to her two aimless sisters, Holly (Dianne Wiest) and Lee (Barbara Hershey). The careful and perfect world around Hannah is upset when Elliot develops feelings for her sister, Lee, and begins to pursue an illicit romance with her. That drives the narrative, eventually involving the entire family in one way or the other until there is a satisfying resolution. It is a wry but ultimately feel-good story in the end, funny and touching at the same time.

The carefully rendered characters by Woody Allen have interior monologues reveal their most private thoughts to the audience, which lay out the underlying feelings behind the squabbles and petty disagreements of the sisters. Holly and Lee both resent Hannah on some level with her stability and success in life. It is a story about love and relationships in the urban world of New York City that always feels genuine and authentic, even when the plot switches focus from one sister’s personal problems to the other.

What elevates Hannah and Her Sisters from ordinary melodrama to fine art is the deft inclusion of the character Woody Allen himself plays in the story, Hannah’s ex-husband Mickey. Mickey is a successful television producer and writer that also happens to be a hypochondriac, allowing Allen to play up for comedic effect all the neuroses and anxieties his brand of humor is known by in film. The role of Mickey is possibly Allen’s best and most nuanced work as an actor, as he wanders from religion to religion looking for answers in his trademark style.

Hannah and Her Sisters is both a comedy and a drama, with subtle insights into the nature of love and familial relationships. Woody Allen hit all the right notes as a writer and director in delivering a genuine classic, backed by the top-notch performances of the cast. If you want to watch a mature and sophisticated rumination on love and its consequences, this is the movie for you. As the movie sails along, you can’t help but wonder how much of it was taken from Allen’s own personal experiences. 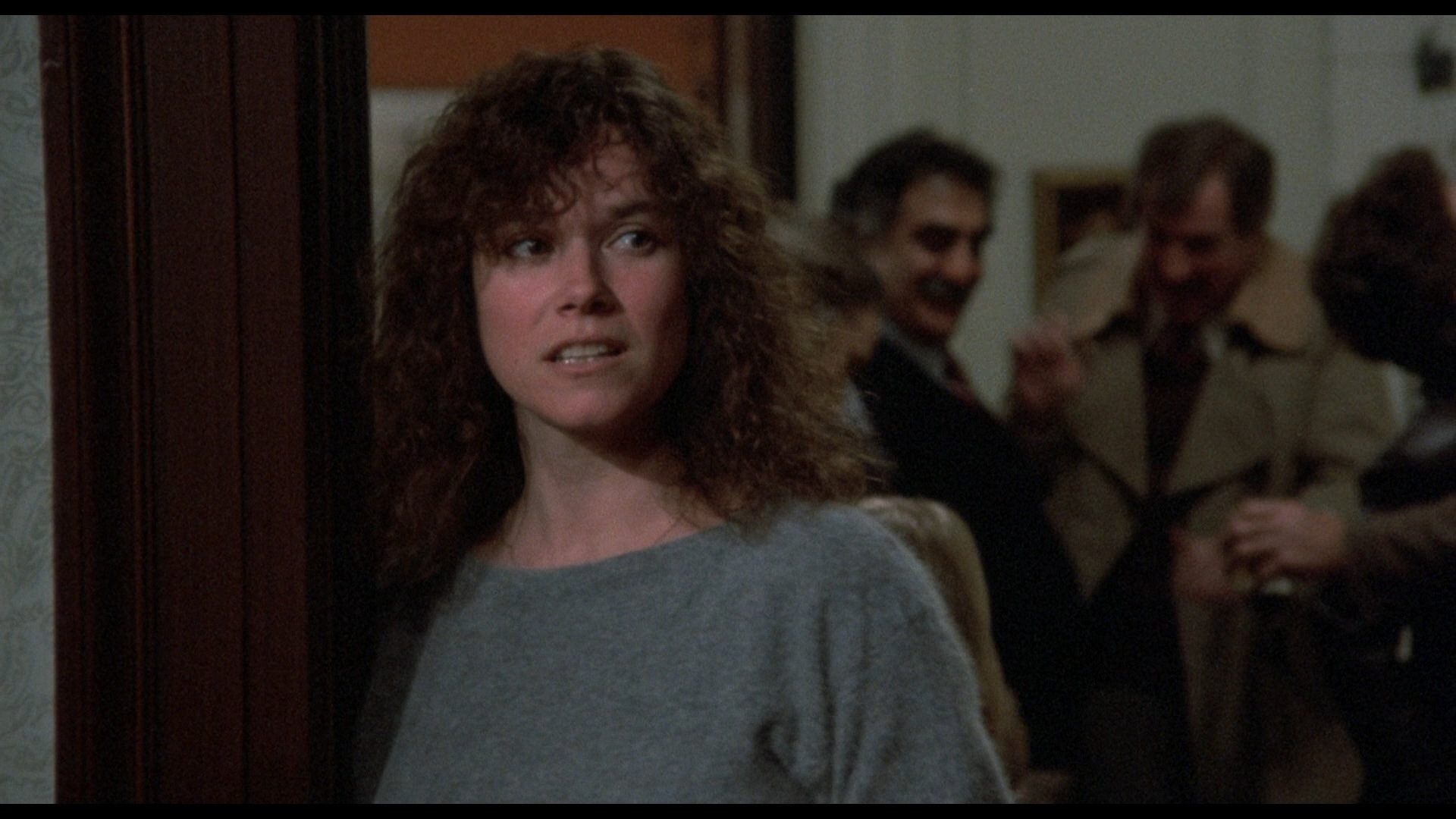 Fox has dug through MGM’s vaults to serve up a very dated and obsolete transfer for this Blu-ray. MGM’s DVD for Hannah and Her Sisters came out in November of 2001. It looks like Fox pulled out the older telecine film transfer made for that DVD and used it to create this Blu-ray, which produces frustrating results for the video quality. That older transfer was not great to begin with, showing obvious edge enhancement and very odd-looking grain. It is simply not adequate for the demands of a newer Blu-ray today and provides only a marginal increase in resolution over standard definition. Superficially, the film print is relatively clean and free of debris for a movie of this vintage. That does not help the fine detail or clarity in the picture, which could be called rough at best.

The movie has been squeezed onto a single BD-25, crimping the video compression in the process and producing some digital artifacts like macroblocking. The AVC-video for the main feature averages 25.997 Mbps but still struggles at times to cope with the thick, dense grain and heavy shadows. The lack of proper compression parameters definitely affects the grain structure, producing a clumpy appearance with unnatural density for film stock of this vintage.

A thick and intrusive sharpening filter has been applied in various degrees across the film. Some scenes display the halos worse than others, though the increased level of noisy grain is a dead giveaway in early scenes. Sharpening tends to exacerbate the grain levels from certain film stocks. It is hard to say if any type of digital noise reduction has been applied to the transfer. I would guess not, due to a couple of likely factors. There isn’t a huge amount of facial detail in the image, but that is much more likely due to the age of the transfer and the suspect film elements used for it.

What the picture does have is a huge amount of grain, though it resembles the grain found on a dirty film print and not a new transfer made on a pin-registered scanner. Its noisy look has been sharpened and magnified by the outdated film transfer. Contrast also poses a problem to the picture quality, as some scenes are much darker than intended by Allen or his cinematographer. This renders shadow detail very poorly in which the black levels are always on the verge of being crushed. It affects the interior scenes more than the cleanly-shot exterior scenes, though clarity takes a drastic dip for action at night.

I wish Fox had given the film negative some level of restoration and created a new transfer for this release. Instead we get a much older transfer made on outdated equipment and one that barely holds up to the scrutiny of 1080P. This BD presents a slight increase in overall picture quality from the anamorphic DVD. The movie is framed in its original aspect ratio of 1:85:1, running a shade over 106 minutes.

The primary soundtrack is a DTS-HD MA 1.0 presentation. Prepare your center channel to get a full workout from the strictly mono soundtrack, though none of Woody Allen’s films have been sonic marvels. Yes, Allen’s strict adherence to mono mixes for his films is preserved here in all its lossless glory. The 1986 mono recording is a tad dated by the audio references of today. Dialogue is intelligible and easily understood, but the music in the film sounds a bit harsh in terms of compression and fidelity. The dialogue-driven movie has a surprising amount of older Jazz and Big Band-era music, apparently personal favorites by Woody Allen.

The jazzy soundtrack is one of the more notable elements in Hannah and Her Sisters, featuring a mixture of Cole Porter, Swing, Chamber and Classical music to set the romantic tone of the film. The older recordings can be appreciated on their own merits but the DTS-HD MA mix overly compresses their sound. They play louder in relation to the normal dialogue than one might expect for a drama. A smoother and fuller sound would have been better for this type of music.

Like most of Woody Allen’s body of work, virtually no supplements have ever been created for Hannah and Her Sisters on home video. Woody Allen has always preferred to let his movies speak for themselves, eschewing much of anything beyond including trailers on DVD. The theatrical trailer from the original MGM DVD has been brought over, this time in the quality of HD.

Interestingly enough, a brief scene featuring Carrie Fisher’s character is in the trailer that does not actually appear in the movie. It hints at the vast potential of deleted scenes and other supplementary material that might exist for Allen’s films, which audiences have never had access to on home video.