A Late Quartet is a sophisticated look into the lives of a fictional string quartet, the “Fugue String Quartet.” The quiet drama hides behind its stellar cast and the trappings of chamber music but make no mistake, it tells a powerful story full of emotion and passion.

A tightly-knit group learns its eldest member, Peter (Christopher Walken) the cello player, has developed Parkinson’s Disease and wants to retire from touring after twenty-five years. That sets off a chain of events within the quartet, as resentments and grudges come to the surface.

The story can’t be separated from the craft of chamber music, as the professional lives of the quartet’s members intertwine with their private lives. The Fugue want to go out playing Beethoven’s Opus 131, considered the creative peak of Beethoven’s output and his personal favorite piece of his own work. It is also a very challenging and demanding piece to play, calling for seven movements in a row without a break or pause. The successful quartet hope that Peter is well enough to play it one last time.

Walken is magnificent in the very understated role of Peter, as the elder statesmen of the quartet that everyone looks up to and admires. He faces the crippling nature of Parkinson’s Disease with grace and poise, as the rest of the quartet falls apart around him from emotional issues. It is a different type of character than Walken traditionally plays, but he is truly outstanding in the nuances of the role.

Phillip Seymour Hoffman and Catherine Keener play the married couple in the quartet, with him being the second violin and her playing the viola. Hoffman handles the role of Robert with the typical world-class performance he brings to all his characters. It is a mannered approach to a hard-working and sincere man, comfortable with his place in the quartet as the second violin until Peter announces he is walking away. Robert’s wife, Juliette (Keener), is the glue that holds the quartet together until certain events push her over the emotional edge, as the tension builds within the quartet over finding a replacement and other dramatic developments.

The last member of the quartet, Daniel (Mark Ivanir), ends up in direct conflict with Robert as they jockey over the position of first violin. Daniel is a gifted violinist, the one member that could have a solo career if he chose. His demanding style of play mirrors his demanding personality. A harsh, impersonal man, Daniel agrees to be the musical instructor for Robert’s daughter, Alexandra, pushing her to the limits of her talent. An interesting little side-note about the character of Daniel, his role was originally intended for Ethan Hawke, who had to drop out due to scheduling conflicts. Make no mistake, Ivanir holds his own amongst the stellar cast and in some ways has the most crucial performance to the central themes of A Late Quartet.

A Late Quartet is a superb film with one of the most talented casts in recent memory. One hardly needs any understanding of chamber music or its charms, to be mightily impressed by the character study implicit to the melodrama of each musician’s life.  The compelling drama is built upon a bed of slowly-building emotional tension that unwinds like a snake. This movie was made to win awards and it should succeed in that endeavor. 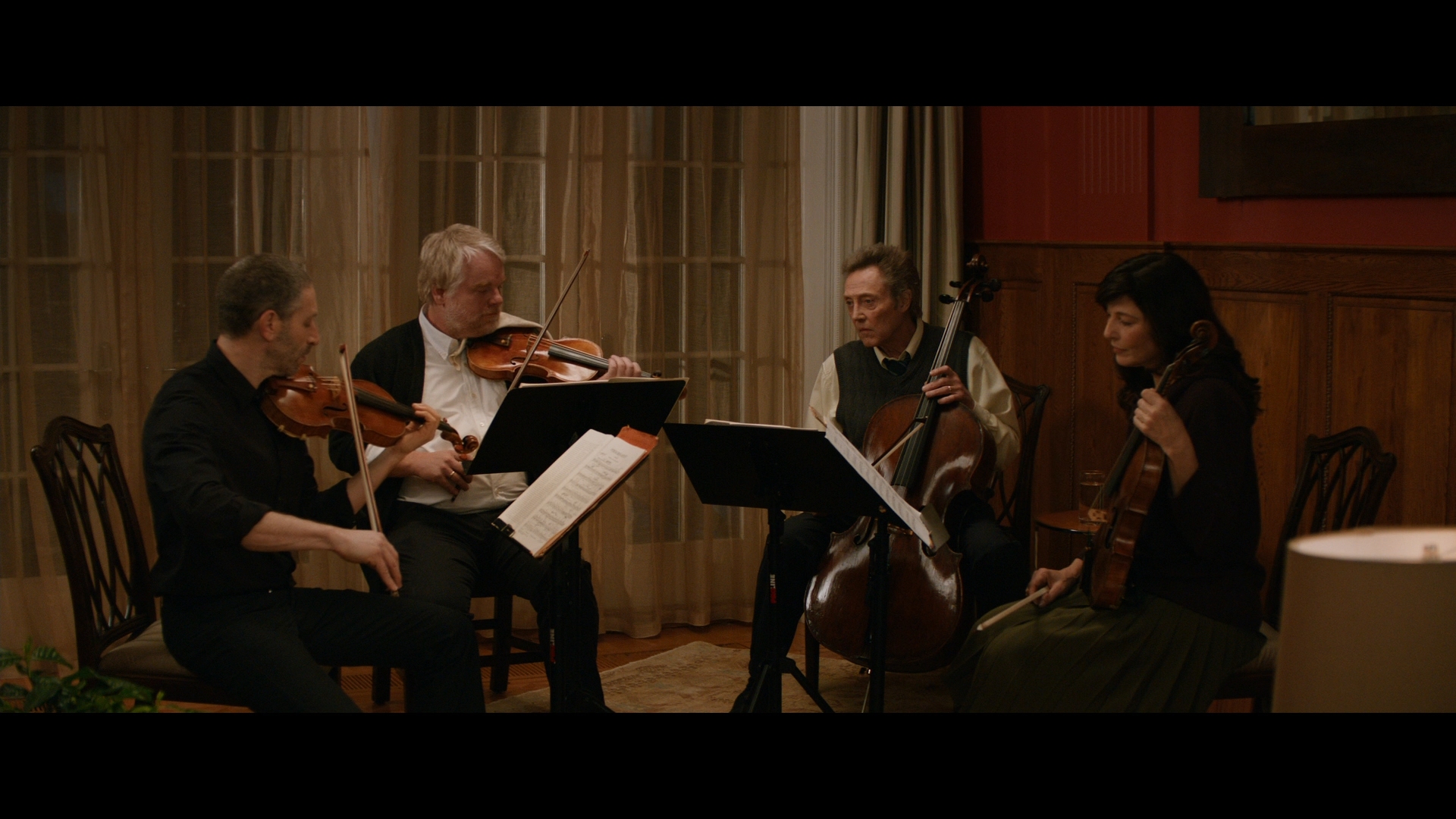 A Late Quartet has been granted an AVC-video-encode that runs at approximately 22 Mbps. Running 106-minutes on a BD-25, the movie is framed in its native 2:39:1 aspect ratio. Shot using the ARRI ALEXA digital camera, A Late Quartet looks very good on Blu-ray in 1080P. A few quibbles we shall get to later knock the grade below a perfect score.

A slow-moving drama with hardly any sense of action, A Late Quartet has been carefully shot for a detailed and vivid picture. Clean as a whistle from visible defects or the appearance of grain, the benefits of shooting with the high-end ALEXA are immediately apparent. A pleasing contrast is complemented by the rich color palette and superb black levels. Exterior scenes have excellent definition and vivid depth, though the contrast subtly shifts darker for interior shots. Many, if not most, will find no fault at all with the near-reference video quality.

The one serious detriment to the image is the common sight of pronounced horizontal ringing. Aliasing of severe magnitude can and will appear at any time, popping in and out of the movie with inconsistency from scene to scene. The halos are most noticeable on the strings of the violins, as the musicians play their instruments.

The ringing is more characteristic of the camera used in production, than any indicator the transfer from the digital intermediate was heavily processed. All things considered, A Late Quartet still has very good picture quality for a satisfying visual experience.

As a movie built around the lives of a string quartet, a quality soundtrack for A Late Quartet was always going to be the key to a top-notch presentation. The English 5.1 DTS-HD MA soundtrack is perfectly up to the task of the mostly quiet drama, reproducing the chamber music with sweeping fidelity. There is not a large amount of surround activity to the mix except a few instances which add a subtle bit of texture to the mix. The sound is largely confined to the front soundstage, though instruments are placed in pinpoint precision across it.

Where this soundtrack shines is its sparkling presentation of the chamber music replete throughout the drama. From Bach to Haydn and other noted composers, the classical music from stringed instruments are delivered with clarity and precision. It reaches an apex in the climatic finale of A Late Quartet, where the Fugue give their final performance of Beethoven’s Opus 131. Dialogue reproduction is clean and nicely balanced in volume with the regular segues into the chamber music. The sound is never harsh or overbearing, even at louder volumes.

Fox has provided subtitles in Spanish and English SDH, both of which appear in a white font.

A single extra feature has been provided for A Late Quartet by Fox. Considering the excellent ensemble cast and finely crafted script, a commentary by the director or more background on the featured Classical music would have been nice. As it stands, the included featurette is put together quite nicely in which it touches on several different themes from the film. Yaron Zilberman, the director, gives his thoughts on a few important topics. It also includes brief comments from every principal actor in the movie except Catherine Keener, mostly concerning their preparation for the role of playing an instrument on the screen. Fox has also provided three trailers that precede the main feature, all in HD: Fox Blu-ray promo, The Oranges, Atlas Shrugged Part II: The Strike.