Immortality is a strange mix of themes and genres for a film about a vampire. Nominally, the story is about a vampire looking to emotionally connect with human women and then drain them of their blood. Known as The Wisdom Of Crocodiles in markets outside of America, director Po-Chih Leong has instead crafted a doomed relationship drama with art house pretensions. Jude Law is the suave vampire in this particular case, seducing women into committed relationships before he has to kill them for their blood.

From the very beginning as we meet Steven Grlscz (a much younger Jude Law), he’s a cool, calm monster that tricks women into a relationship and then kills them. It’s an interesting and complex portrayal of an immortal serial killer, as Steven on the surface seems mostly normal if you discount the dark and mysterious vibe that he gives off to attract the women. One of Steven’s murders eventually lead the police to start seriously investigating him as a possible murderer. There are many holes within the plot if one examines it in detail, but one gets the feeling the director was more concerned with style over substance when formulating Immortality.

As Steven tries to avoid being fingered for the murder by two London police detectives, he meets French engineer Anne Levels, played by exotic beauty Elina Löwensohn. They quickly fall into a curious romantic relationship with one another, spouting poetry and having wistful conversations over breakfast. Anne starts to break down the careful calculations that Steven has laid out for his potential victims.

Their romantic relationship is where the movie’s ethereal style starts to hurt both the narrative and its entertainment value. Instead of a tightly-paced thriller, the story mostly devolves into a bad relationship melodrama between Steven and Anne. Leaving only one burning question for the story to answer. Will Steven kill this woman for her blood, like all the ones he has killed before?

The acting is top-notch and the movie is finely crafted from a technical perspective, but Immortality has not aged well. It is a very arty film at its core which will challenge many viewers expecting a normal vampire story. Jude Law’s fans will likely enjoy his performance but there is little genuine suspense in this supposed thriller. Immortality is the classic tale of beauty and the beast, if the beast happened to be a serial-killing vampire. 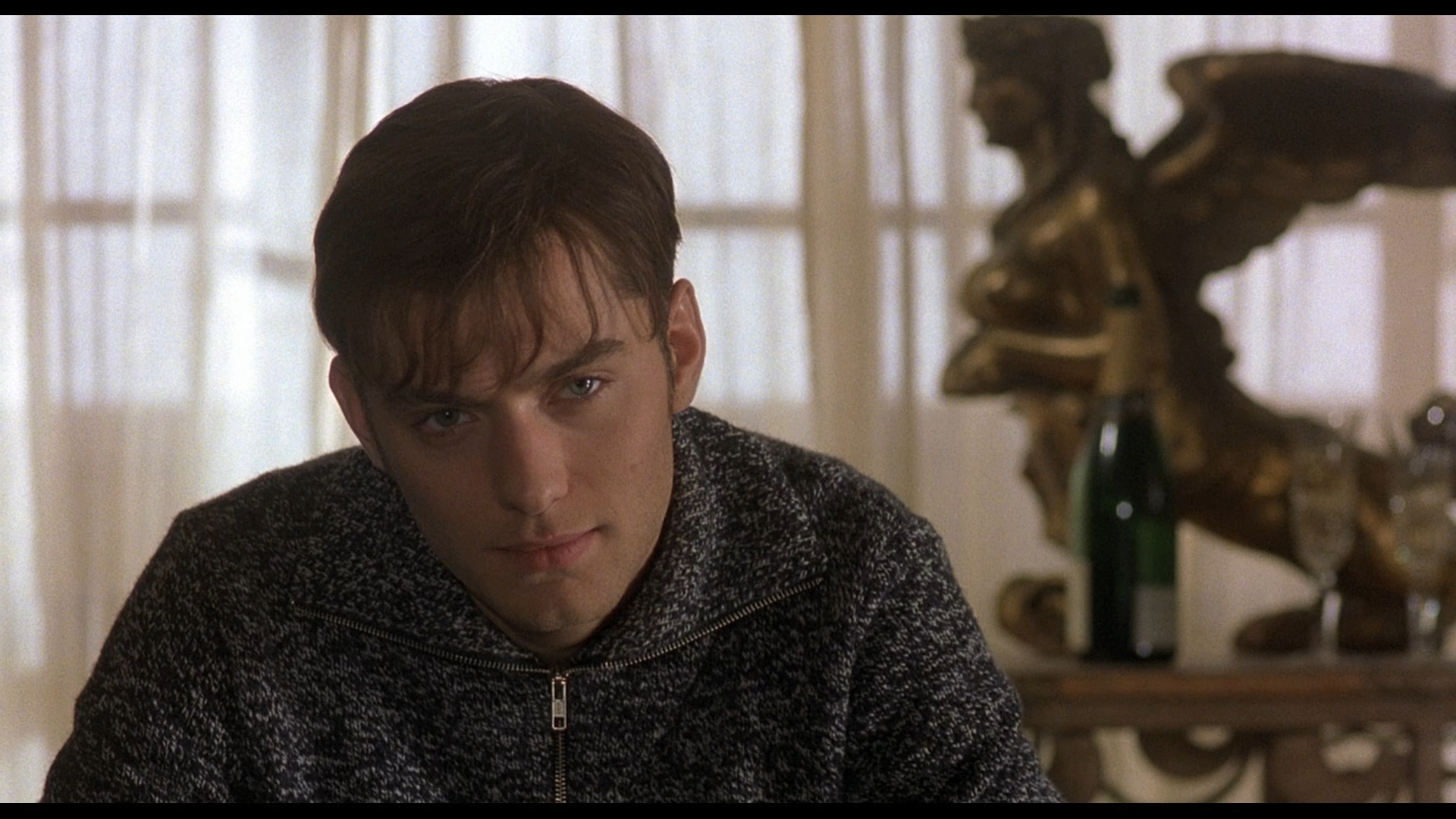 Echo Bridge licensed the 1998 British film from Miramax’s catalog. Immortality is presented at 1080P resolution on a BD-25, in its native aspect ratio of 1.85:1. Running slightly over 99 minutes, the AVC-video encode averages exactly 22.00 Mbps. This is not the worst HD-transfer to make it on Blu-ray, but certain scenes look only marginally better than a nicely upscaled DVD.

The saving grace of the very dated master is the film’s inherent cinematography. Shot on 35mm film, Immortality’s principal photography was made with care. Contrast is very stable and flesh-tones are accurately rendered without obvious manipulation. It is very possible this Blu-ray’s master was taken from the same telecine transfer that created the original DVD. The general lack of fine detail to the resolution and overall softness indicate a much older scan of the film elements than what could be achieved today.

On the positive side of the ledger, the film print has very little debris for an older catalog transfer. Aside from a modicum of ringing that most will skip over, the transfer shows little sign of having been processed with sharpening or digital noise reduction. Close-ups possess a clarity that the longer shots in the movie can’t match, though the general level of fine detail rarely exceeds what a nice, upscaled DVD can produce.

Don’t expect a huge increase in picture quality from this disc over the anamorphic DVD.

Like so many other discs in this wave of Miramax releases from Echo Bridge, the only audio option is a 2.0 DTS-HD MA soundtrack. That excludes the film’s discrete 5.1 surround mix, which was available on the original DVD. In another blow to this Blu-ray’s value, no subtitles of any kind are provided.

The 2.0 DTS-HD MA offering is a serviceable but unspectacular audio experience. Mastered at a very low volume level, bits of dialogue are slightly unintelligible in a few scenes. The overly dramatic instrumental score is placed relatively high in the mix, sometimes overpowering the environmental sound effects. Fidelity is clean and natural, highlighting solid channel separation in the few scenes that require it. It is a spacious stereo presentation that does use panning and localized sound cues, though it is much more impressive in the 5.1 mix that is missing from this BD.

Echo Bridge has managed to transfer over the lone special feature from the original Buena Vista DVD. It is a short featurette that mostly interviews the director, Po-Chih Leong, and main star, Jude Law. Both discuss the movie’s central themes and explore the depths of Steven Grlscz as a character. If it had been expanded to include more material, this featurette might have made a substantial companion to the film. The brevity unfortunately limits its impact.

Immortality on Blu-ray is currently a retail exclusive for Best Buy until March 26, 2013. Reports indicate it can be found at Best Buy for $5.99.