Bond is a little older, and a little less adept in Skyfall. According to British government, the same can be said for M.

This is a more human Bond, still a chauvinist, still a martini drinker, and still sharp. Even as MI6 is assaulted by cyber terrorism, Bond deciphers clues better than the young computer wiz Q (Ben Whishaw). This is enormous escapism, where hackers wail away on keyboards to work through illogical interfaces and spout off “firewall” because it sounds cool.

Daniel Craig’s latest run as the sharply dressed super spy begins with a furious chase sequence, filled with a tremendous amount of fruit carts being smashed. Onto motorbikes, the run takes to the roofs of Istanbul, then transitioning into an utterly fantastic brawl over sensitive computer data on top of a speeding train. Skyfall initially does not seem any less subtle that the previous two films, of which this narrative shares no connection.

Then, Skyfall narrows. Bond becomes an outlier, while M comes under fire as MI6 becomes a heated target for villains and government alike. Bond’s absence has an immediate effect, both for the organization and himself. Afflicted with a gunshot wound, Bond has lost some of his snap. Not only is he aging, he is also slowing under physical duress.

Skyfall moves to link M (Judi Dench) and Bond through their fragility. They need to rely on one another to save their organization on sometimes blind faith as a ruthless Silva (Javier Bardem) seeks a vendetta.

And that is, arguably, where Skyfall goes wrong: Javier Bardem takes this movie as his own. Bond’s own action flourishes, certainly smaller in their dynamics, are suffocated by Bardem’s performance. The enormity of this character – who only exists in half the film – is outstandingly imposing. Style places this character on an elevator for his introduction, the camera situated behind Bond, handcuffed to a chair. Silva walks forward, the camera motionless, telling a sickly story about cannibalistic rats. They do not come any better.

Skyfall may be a surprise for those weened in on the modern Bond flair. Casino Royale and Quantum of Solace were weighted in lengthy action escapades. Past the introductory sequence, Skyfall prefers a swifter, singular punch. Peppered with a handful of explosions that lead into enormous bursts of energy, the film is otherwise sedate for the less patient. Those invested in the characters (and any espionage fan should be) will soak it up regardless, but Silva is of far more interest than the mixture of Bond & M.

If there is anything left to say for Skyfall, it should be centered on the jaw dropping, beautiful cinematography. Exquisite locales will make it seem easy, yet Skyfall does something wholly unique. While Turkey and Scotland are often expansive in their naturalistic state, China is overwhelmingly electronic. Bond’s infiltration into an office space under construction to bag a sniper is majestic in its style. Images cascade over the glass, lights flicker over the actors, and the use of shadows is wholly beautiful despite the viciousness of the violence. This is a film you cannot look away from. 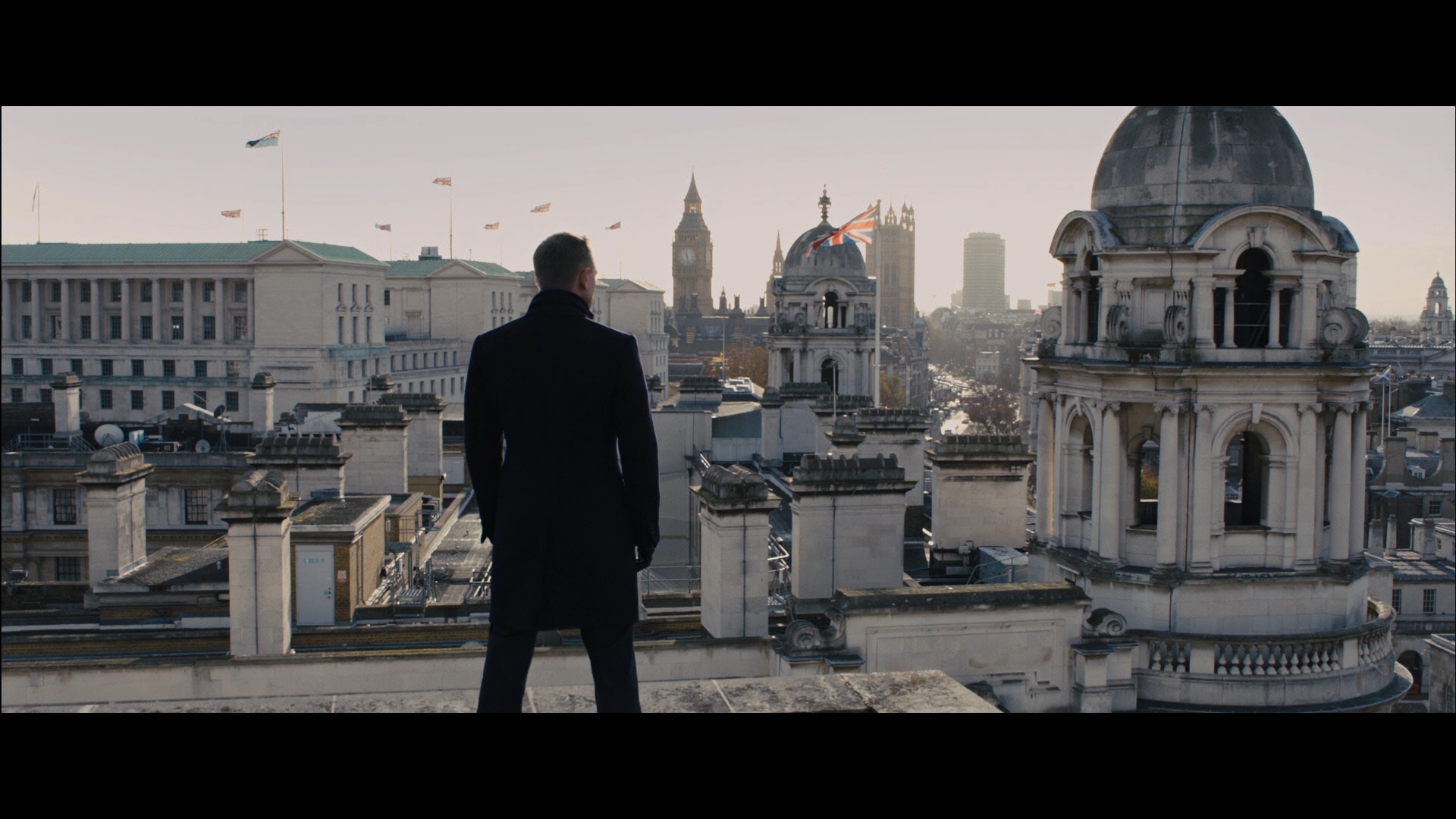 If anything is persistently doomed to fail in Skyfall, it is black level. Miserable depth is established by dwindling shades of pale gray or muted browns thanks to the color correction. Even when a peak is reached, the blacks have the tinge of being artificial, with a reflective glow that sticks out amongst the other elements. Shot entirely on digital, this all falls on the source photography, yet sticks out dramatically in the home.

Of course, with such a healthy contrast at its daylight peak, blacks become a secondary concern. That also begins to let the on again, off again color palette breathe. Dusty in Turkey with earth tones, chilled in the blue neons of China, and mixing is together for a slightly saturated warm/cool look in the finale, Skyfall likes to wander. The intended look is strong, often bold despite a lack of primary color impact. Much of the film is faded.

When Skyfall lets it all out though, few discs will be able to dazzle on this level. Striking location vistas are presented without any noticeable image break-up. Lines remain sharp, and the digital clarity is marvelous. A lack of video noise or introduced compression artifacts means there is no impediment towards a windowed effect. Sony’s AVC encode is a wonder given the complexity of certain shots.

In comes the texture next, with natural facial close-ups picking on subtle details, and a crisp focus able to aid. Suits are superbly rendered, and even under low light, the photography is sharp enough to pull out even the slightest stubble or pore. There may be an instance or two where Skyfall carries a slightly unnatural gloss, but then it is a quick recovery into definition-ville… which is a real place. You can find it on this disc.

Opening on a chase sequence means an immediate opportunity Skyfall’s DTS-HD mix seizes. Poppy gunfire is beautiful in how it fills the soundstage, and passing vehicles with a hint of bass upon collision makes a complete sense of scale and place. The same goes for the rooftop bike run with engines panning to the sides, overhead, or front to back. Stereos are well utilized to stretch the action. It seems obvious what happens once the fight enters into a tunnel, and there are more tunnels to come.

As mentioned before, this is not a series of elongated, wild action scenes. Most are highlighted by a few bright moments or one incredibly scaled one, say a subway train crashing underground. There, you will be treated by exceptional bass and well conceived debris falling all over the place. It is an aural highlight that becomes bested by a simply awe-inspiring helicopter crash and subsequent explosion later.

Bond’s many encounters with the fleet of faceless villains are accentuated by gunfire popping into the rears, and snapping off with precision fidelity. In the midst of a tense, end movie gun fight, shotguns and hunting rifles become dominate, abusing the subwoofer with intensity. Grenades fill the room with low frequencies, and all the while a helicopter circles above adding a sense of height to the ground battle.

All of this does not even touch the smooth low-end coming from the music or the superb glass shattering in the China fight. Even echoes from dialogue within open interiors or ambiance via crowded locations deserve a nod. High class design all around.

Shooting Bond is a thick, 14-part making of that leaves little to the imagination. From the design of the credits, the music, the action, selection of actors, and effects, this hour long run through the making of this piece is a must. Footage from the British premiere is offered, as well as two commentaries. Director Sam Mendes is first, going solo, with producers Barbara Broccoli & Michael G. Wilson joined by production designer Dennis Gassner on the second. Some trailers check off the latest Bond disc.