New Holland is a special place. In the midst of this modern middle maybe America/maybe not so America town, there sits an antique windmill. A pet graveyard is a centerpiece, and thunderstorms hit the town every evening.

One resident is Tim Burton… err rather, Victor, who is instantly a Tim Burton character. Recessed eyes, a young loner, and pale complexion (if the black & white photography is correct) make him hard to miss. Victor’s only friend is a dog, Sparky, a whats-it loveable mutt that is destined to have a bad day.

Calling forth the events is the school science fair, Victor working out his potential experiment when Sparky is hit by a car. Oh, and Victor’s last name is Frankenstein. Yes, it is that obvious what happens next.

Cue up the usual rambunctious events: Hiding Sparky, Sparky escapes, the parents freak out, and the other kids at school make a giant turtle. It all works out in the end.

Frankenweenie is decidedly grim and morbid, Tim Burton clearly unwilling to tone down his sometimes grisly imagery, and that is okay. Frankenweenie takes some challenging swings at the kids, asking them to handle heavy material between all of the laughs. Good on him for avoiding the usual cliches, this stop motion piece freed from many of the animated traps. Victor rejects his probable sidekick, the villains are indirect, and a possible blossoming romance is only that: possible.

Much of the humor is visual, driven by the wide-eyed designs and a surly cat that exists merely to act superior. Frankenweenie’s script is rather direct, Victor showing only a modicum of character growth by film’s end. In some ways, the film is one note, and in others, it is generous.

The seemingly infinite number of homages aimed at classic and more modern horror/sci-fi movies in the final is exhausting. Some are for the hardcore fans, others are more familiar. As a bunch of mutated Sea Monkeys rampage through a state fair drinking booze with Disney classic Bambi playing in the theater, it’s Gremlins. A giant turtle? That is undoubtedly Gamera.

Frankenweenie does not merely exist for the horror/sci-fi dedicated, although that is an audience who can get a lot out of it. This one has a heart and a soft spot for those whom have lost pets and suffered the grief that follows. On a brighter note, Frankenweenie also celebrates what it means to have that companionship and how in the end, it’s always worth it. In the case of Tim Burton, he somehow gets the message across with a giant turtle. Go figure. 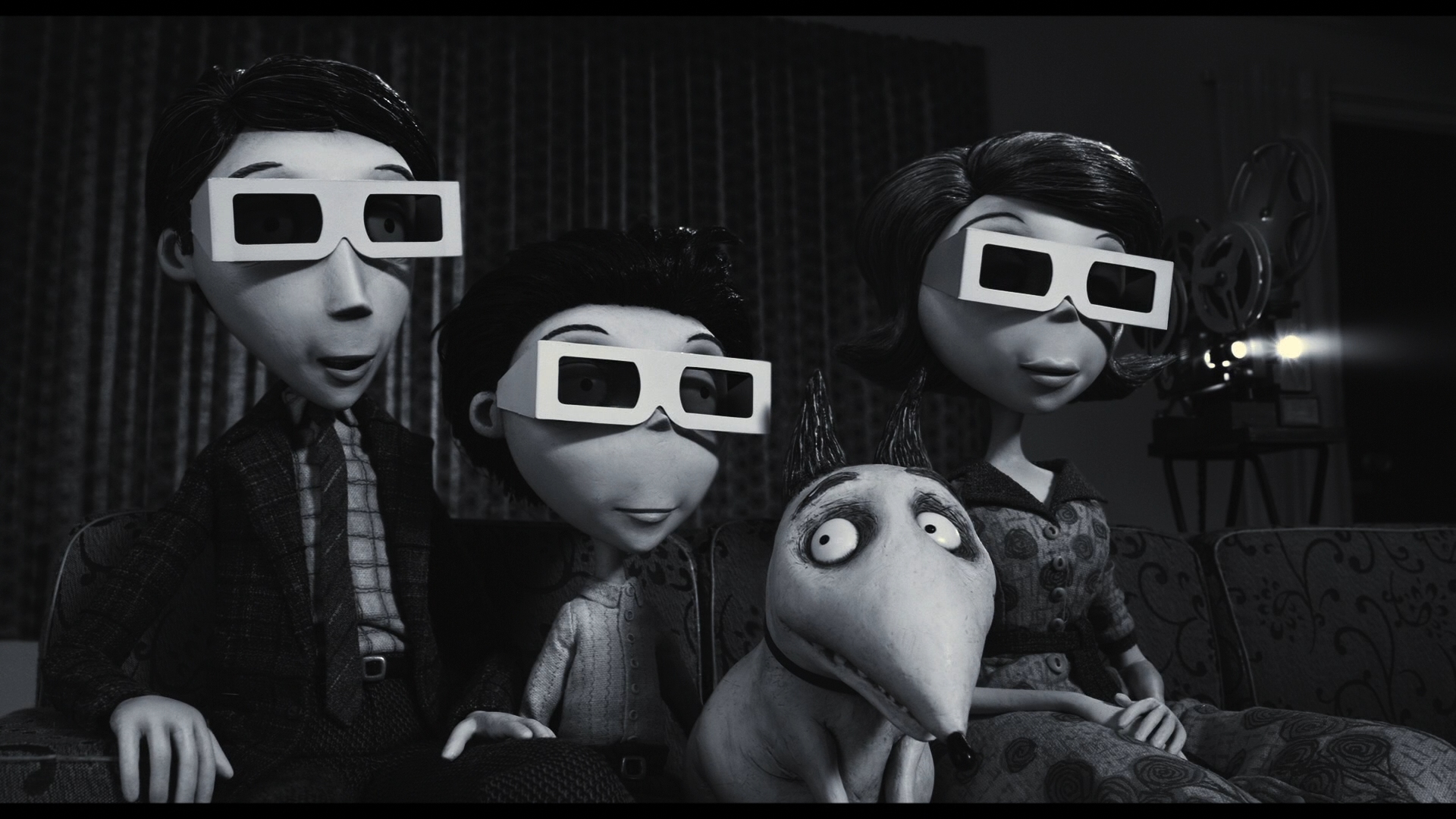 Stop motion is on an HD tear, lighting up the Blu-ray landscape with all of the wonders the form can bring. We’ve had ParaNorman and The Pirates! within the past few months alone, both stellar releases. Chalk up another to the supremely textured Frankenweenie. Impressive well into the frame, things such as miniature grass carry remarkable sharpness, and clothing texture is sublime. The finest of stitches on the mayor’s suit during the finale are visible, and all of Frankenweenie’s stitches carry their somewhat sick texture.

Entirely black & white means a crucial gray balance this disc has no trouble picking up. Black levels establish a wonderful, consistent presence without crushing any detail. Contrast is perky without nearing the point of blowing out. Often, the general gray tone is maintained to spruce up the eventual bursts of lightening. Those flash brilliantly white.

Disney’s AVC encode is exceptionally done with no noticeable compression concerns, banding, aliasing, or flicker. This is as stable as encodes can be, and the end result is pure clarity. It almost seems effortless. A pure digital source is precise and gifted with superior resolution that comes through even at 1080p. Close-ups of the puppets are handled with the utmost focus, the small lines included by the model maker’s hands in clear view. Frankenweenie is rarely toying with its focus, ensuring each frame is a winner.

Double all of that for the 3D material. Despite only a few moments designed around exaggerated pop-out effects, Frankenweenie goes tremendously deep with its framing. Shots vary between low and high, both styles able to convey impeccable dimension. Shots of the town, the school, or even the makeshift laboratory are littered with items that can layer the frame with depth.

This is one of the few discs bold enough to try for black & white 3D, and the effect is arguably better than most color productions. There is just as much effort here as there is any color piece. Worries of cross-talk should only be levied at the most prone of TVs, the contrast typically held back for effect so shimmering objects are few. That means sit back and enjoy the generous rain effect, cats leaping out of the frame, and a carnival ride that is absolutely dizzying as it spins into view. This is one of the best.

Precision, precision, precision. That isn’t even close to overstating it, so precision. Again. Everything in Frankenweenie’s aural world has a place. Hearing the dialogue swing around the soundfield as needed is a ton of fun, and transitions through the channels is perfectly smooth. Ambient effects like rain and thunder (the latter which is entirely retro in its thin, pitchy design) will envelope the soundfield while using it for all it can.

This 7.1 mix won’t miss a thing. It never allows itself to. As a science theory goes wrong, some bottles are sent into every speaker as they bounce and crash down. Barking dogs can be centered in the rears where needed, or chipper in the stereos as they circle. This is all a set-up for the gargantuan finale with booming footsteps that rattle the LFE channel, and plenty of screaming onlookers running around. Every channel is worked hard in a disc that is almost scary in how reference it is.

Extras are contained on the 2D Blu-ray within the package; the 3D disc barren. What is here doesn’t alter the bonus features landscape, but it is solid material. Miniatures in Motion is surprisingly deep 22-minute featurette that looks at all angles of the production, not just the animation. A look at a touring exhibit that showcased the models is short, and would have been awesome to see in person.

A short with Sparky in a ’50s style invasion movie is fun for its brief runtime, and the original half hour live action Frankenweenie short is included here too. A handful of trailers and a music video round off the disc.