Audiences love to root for Denzel Washington. Maybe he is taking a high school football team through their paces or trying to stop a hijacked subway train. Few actors are allowed to be this centralized as a heroic figure, and in Flight, he drops it all expectation to create his finest character to date.

Flight is a film about a journey and a need, Washington’s “Whip” Whitaker forcibly dealing with the death of his parents, a broken marriage, and disinterested son. His journey is involuntary, brought on by a nearly catastrophic airline crash that claimed six lives. As the lead pilot, Whitaker is billed as a hero. The media finds his story interesting, yet feels his absence from the spotlight is a sign of ominous truth. Pressure pushes Whitaker deeper into the bottle he was nearly drowning in pre-crash.

He needs something, and may find it in another addict he meets by chance while recuperating in the hospital. Nicole (Kelly Reilly) has already hit bottom and is beginning her climb out, Whitaker is nearing his own breaking point. The mixture works, both capable actors dealing with deeply emotional material that serves a strong center for Flight. Reilly is able to handle her own against a dominating Washington.

This is hardly a perky film, although never dry in its execution. Whitaker is under constant scrutiny, an eager lawyer (Don Cheadle) aware of the alcoholism and drug use that could have brought the plane down. A union representative (always reliable Bruce Greenwood) stands between their often mental war, Whitaker never admitting fault or taking personal responsibility; it was an equipment malfunction. Cheadle’s law is deviously dishonest, but challenging enough to bring out the worst in his client.

Evidence mounts as investigations grow, pressure becoming unrelenting on a man already teetering as he tries to avoid the pokey eyes of a media blitz. Keeping Flight’s narrative away from the victims, their families, or others levels the piece, shying it away from potential melodrama. The human element is there – even played with on a business level – while maintaining strict cinematic focus.

Flight’s hook is that Whitaker needed the crash. Despite being potentially absolved of all wrong doing, the character wrestles with the situation. He sinks deeper to the point of being uncontrolled. Through his addiction, he always had an out in a wild Harling Mays (John Goodman), a close college type friend who never grew up. Mays still lives in a younger community, either for access to hard drugs or to keep whatever youth he can. Mays becomes a detrimental rock that keeps Whitaker in the loop of disease, while adding an off-bit of humor to an otherwise dark piece.

Flight is never scared. It runs with its R-rating, and never treads lightly over difficult topics. Often raw, the base is strengthened by Flight’s ability to go places with a capable actor willing to bolster the themes. This is Washington’s best work, and close to Robert Zemeckis’ as well. 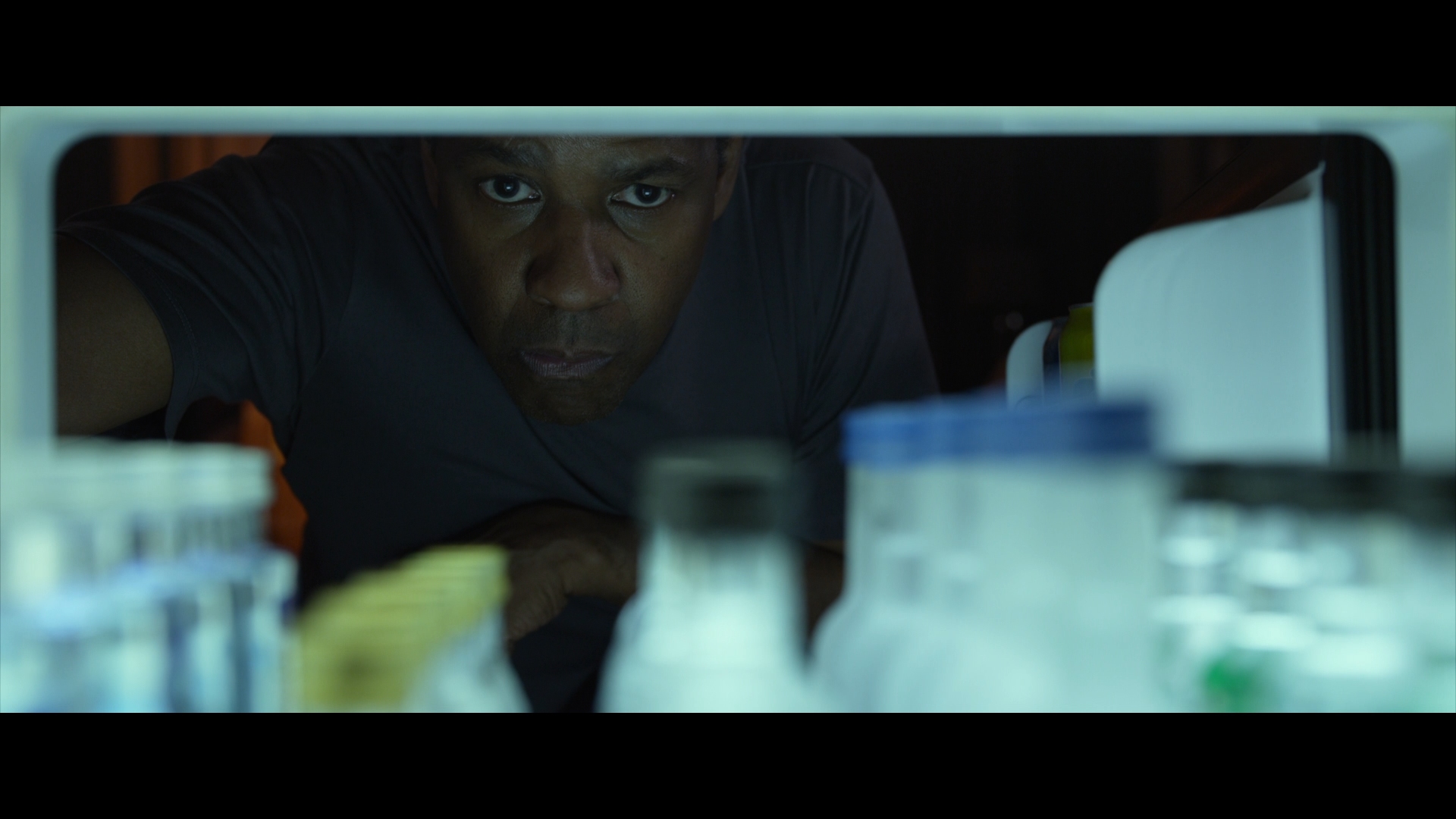 The Red One pulls camera duty for Flight, producing a capably sharp image that is rarely drowning in definition. Sharpness is not an immediate catalyst for fine detail, and as often as Washington is shot in close without any doubts towards the resolution, it just as often misses the tightest elements. Sometimes it falls on focus, others it is merely lacking material from the source.

Paramount’s encode is more than capable though, never adding to the off and on quality of the digital source. Even a moment of banding is quickly ignored and likely a quirk of the Red. With a great bitrate and no other visible signs of compression, there is no reason to believe the AVC encode is at fault anywhere here.

Flight is somewhat unique in that it rarely feels altered. Color timing has a natural presence, even with a hint of warmth as the camera pans over a farmhouse. The tint is acceptable for a deep sunset. Flesh tones carry a realistic hue, and that carries across the entire film. Flight is incredibly consistent in a modern era where a single film can shift saturation and timing countless times.

The downer of it all though are the black levels. Night brings a washed out, flattened appearance that lacks heft. A blueish tint is entirely visible, giving away elements of the frame better left covered by depth that is not here. Peppy as the contrast is during the day to work overtime in the dimensionality fight, it cannot help where the darker scenes are concerned. The film carries a baseline visual appeal of generous clarity (no real noise to speak of) and enough weight for most of the running time to be given a pass though.

You would suspect a plane engine roaring overhead to pile on the bass, yet sitting here with Flight would indicate the opposite. The crash sequence, the pinnacle of the tension, is surprisingly flat on the low-end. While impact is left alone for style purposes, the expectation for powerful LFE leaves one disappointed.

That leaves dialogue-driven drama and the usual attributes that come with the quieter nature. Hospitals carry activity, thunderstorms space out the rain, and the eventual government hearing takes the dialogue into the space of a large conference room. The stressful, grueling scene feels like the moment it should on the right scale.

Exceptional balance works to maintain low conversations, and the highlighted soundtrack carries an especially nice bleed into the rears with superb fidelity. A quiet winner.

Tallying around 45-minutes, bonuses here are thinner than they may appear. Origins of Flight is a making-of that begins with the idea and eventual interest from all parties. A making-of is often generic and passable if not much else. Anatomy of a Plane Crash looks into the process of creating the film’s key scene, from storyboards to a finished product. A Q&A panel runs 15-minutes with most of the major cast and crew.