The Watch has aliens, intergalactic specimens who have visited Earth to take over us all. They have set up shop in a Costco because, “They really do have everything.” These mouthy critters need to build a communication device to hail their homeworld overlords which will signal the end of mankind.

And yet, that is not the most unbelievable thing in The Watch. Nope. More unreal is that someone would walk into a Costco on a whim and splurge for a $2,000 3DTV because they were amazed by an Alvin & the Chipmunks movie. Intergalactic alien invasion? Plausible. A Chipmunk flick selling someone on 3D tech? That has never (and will never) happen.

Maybe that is getting ahead of ourselves. The Watch is the brainchild of producer Shawn Levy if the bonus features are correct. It’s one of those movies that probably had a cast before it had a solid script. Merging Ben Stiller, Jonah Hill, and Vince Vaughn together is instant comedic star power. Oh, there is Richard Ayoade too, but most audiences have no idea who he is. Sorry.

These four team up to form a neighborhood watch after a Costco security guard is skinned alive. Glenview, Ohio is not that type of town. So, these four outliers began doing stakeouts, getting into scuffles with R. Lee Ermey, and eventually uncover a plot to take over the world. The material is totally relateable to the average person.

As fantastic as the practical alien effects (and penis jokes) are, it is almost a shame the buggers are involved at all (the aliens, not the penises). The movie would have played out in a similar manner were the crew tracking down rambunctious kids committing petty crimes. The Watch has a high point where the stars take down some teens who threw eggs, overreacting as they treat the kid like a murderer. A few more reactionary sequences like that, and we would be remembering The Watch sometime after 2012.

The fate for this movie is inevitable. Years down the road as kids take up downloading holographic, Ultrabit films from the neuro-net, Sony (or current license holder) will offer the film as a direct cranial implant. Future customers will wonder why they never heard of a lost gem starring such great comedic names of the ’00s, much like we currently see oddball classic comedy flicks pop-up on-demand now with recognizable stars of yesteryear. When future humanity disconnects from the movie injecting service, they’ll realize why no one told them about The Watch. 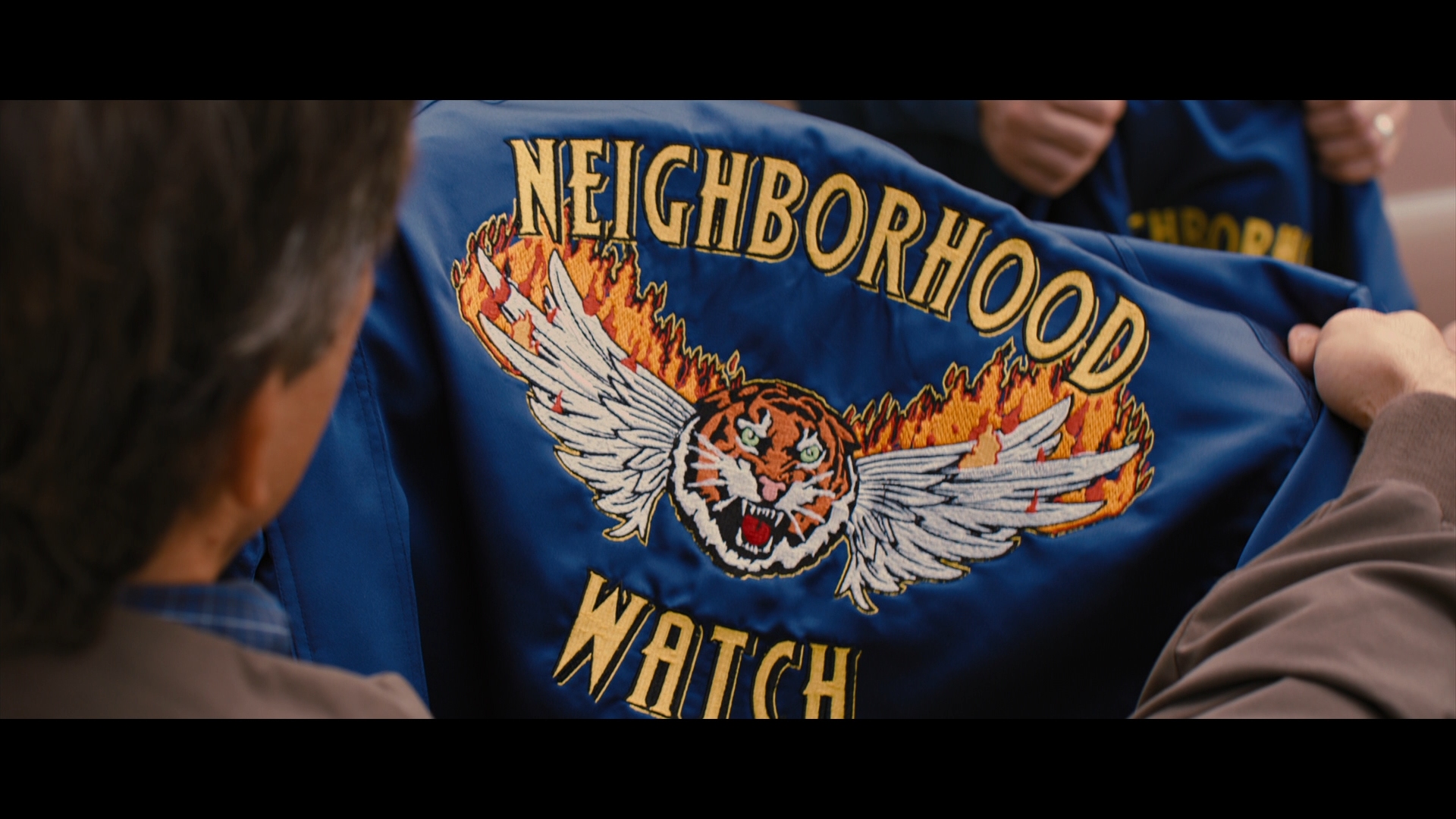 The Watch is a blazer. Blazing color, blazing flesh tones, blazing contrast, blazing teal, and blazing sharpness. It does a little of everything without much of an after effect. For all of this immediate impact, the piece squanders it all. Imagine a film that is faking the definition, or rather, just watch this one to see what that means.

For instance, Ben Stiller runs over a hill, the camera tracking to reveal a running group. They’re all wearing unbelievably bright primaries. Stiller then hits work at the Costco where products and red shirts are all over the place to produce regularly intense hues.

Maybe the camera pans back to show the store and the resolution. Trees look perfectly resolved, shingles are defined, and cars stretch for miles via this gross product placement. Vince Vaughn hands out Watch jackets with a winged, flaming tiger wherein every stitch seems resolved, and the nuances of the 1080p imagery begins to work on some poor sap at Costco. This might sell a TV, not Chipmunks. Seriously, what guy does that? Who wouldn’t ask, “Hey can I see Avatar on this thing before spending two grand? Thanks.” Ugh. Sorry.

Anyway, the loss here is real fidelity. Facial detail is dull, and lacking in terms of density. It is as if the level of orange injected into the flesh tones has taken the really tough detail with it. Any loss of light will tuck the black levels away to save them for later, while the contrast is swallowed by an obnoxious teal tint. No one has blue teeth from moonlight no matter how hard Hollywood tries to convince us.

Some nice shots of the alien suit exist (yes, there are times when Doug Jones’ awesome suit work can shine) and sure, a handful of close-ups, will deliver what a modern digital presentation should. Imagery is clean, lacking in noise and overall clear. It’s a Costco special for sure, but to the more discerning audience, a bit of a downer.

There is plenty of sonic material to soak up within The Watch. Exploding cows? It has ’em. Massive buildings exploding? Well, it has one, and a few smaller ones too, but those are not as fun. Guns fire a lot, so maybe that can make up for the lack of boom boom in the giant building department. After all, the guns holds more ammunition than should be physically possible even if you’re not knowledgeable in the firearm department. That means great mixing of interior echoes, tracking, and surround use.

The mix never completely goes for it, always feeling like it is holding back ever so slightly. A brawl inside Vaughn’s man cave carrying the typical action traits with scattered objects strewn around the soundfield without much in the way of aggression. Everything sounds like it is doing the bare minimum.

It is easy to applaud the explosions and ensuing bass. They have genuine impact, a solid rumble, and it comes across as very modern. Again, this one sells home theaters at Costco. This is all very ironic, but again, the connoisseur of home audio will be left wanting.

A dozen deleted scenes over the course of 24-minutes will only increase the level of mediocrity to begin to the extras. A gag reel doesn’t have much in the way of zingers, and for some reason, Jonah Hill is the recipient of his own alternate takes reel. Watchmakers is a dull promo, and Alien Invasion and You refers to “you” as the stars of the film while they discuss the “what if” scenario of invaders.

Casting the Alien is the best bit here as a suited Doug Jones has a blast performing a mock interview. Trailers and BD-Live stuff no one ever uses (not even Costco shoppers) round the disc off to a smooth edge.