Universal stumbled upon a studio name that could not be more appropriate for Frakenstein, a symbol that survived through the ages as an icon worldwide. Kids wear Halloween masks of the monster even if they are unaware of the source. “It’s alive!” is parodied or used with instant recognition. The hunchbacked assistant, the torch mob, the laboratory, and the misunderstood beast cliches originated here.

Say what you will for the Mary Shelley novel. Much like Warner’s film adaptation of Wizard of Oz, the visuals that film added to these tales dwarf the original source material culturally. These images are unforgettable.

Superior horror lighting brings a castle to life, with sharp edges and weary bricks to house this tale of classic fear. So terrifying is Karloff when he is contained, the thought of him roaming the countryside is a true shocker.

Universal released Dracula the same year. While genre fans love to peek at the ’70s and ’80s as a golden age, it was the ’30s and ’40s that set a standard we all know. Frankenstein was heavier on the violence, a hanging depicted twice with morbid implications, a little girl murdered, and a doctor choked – all on camera. As careful with the kills as Universal was with their vampiric tale, there was no cut away rule in Frankenstein.

Famously, the film opens with a narrator, standing on stage to warn theatergoers of the upcoming film. As a society, we’ve grown accustomed to bloodshed that leaks in front of the camera. Maybe Frankenstein’s less direct approach doesn’t carry the shocks. What it has – like any number of these Universal staples – is unnerving dread and mood. Colin Clive is an equal to his creation, a mad scientist we will likely never match in terms of unbelievable screen presence for a role like this. His morbid sensibilities and the possibilities they create in the name of science implicate an entire field. Thankfully, electricity is not quite that effective in resurrecting the dead.

Monsters rise for any number of reasons, the modern science escape being genetics, before that aliens, earlier yet it was radiation, and then in the early days of film, it was the unknowns of electricity. What changed is that few of these creatures, man made or otherwise, stay sympathetic. Karloff’s monster, even with the glossed over look in his eyes and scarring on his face, is misunderstood. It is as classic an example of that premise as you’ll find, a sorrowful being murdered by a raving mad mob of people. Through it all, it’s Karloff under that make-up, selling the concept, the character, and the icon. 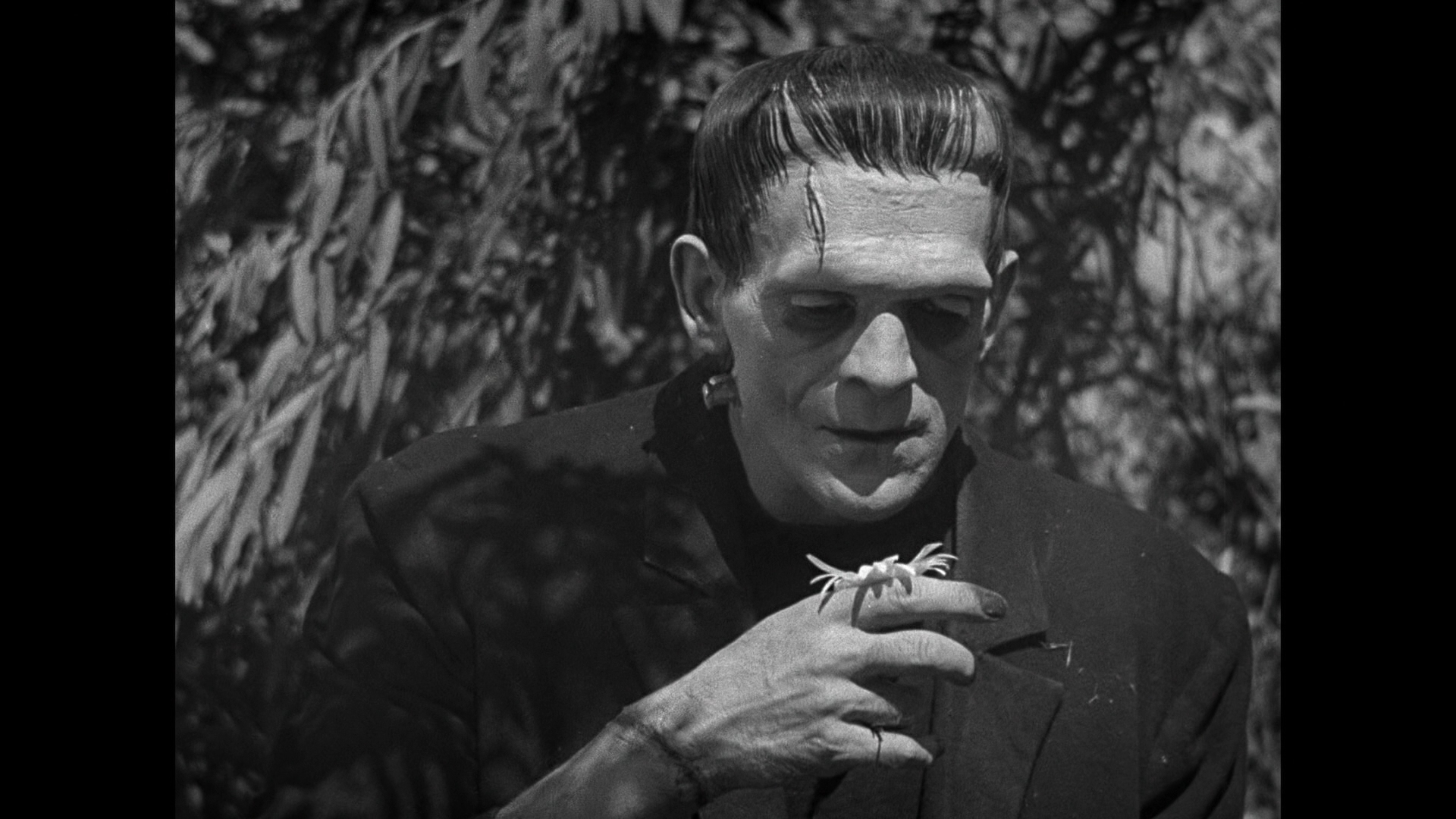 Universal’s restoration team works overtime if this presentation is any indication. While prior DVD issues and reissues of the film showed a slow clean-up through the years, this one tops them all. With only a handful of dropped frames, no judder to be found, and damage almost totally non-existent, this is a startling Blu-ray.

Gray scale is managed to perfection, leading to outstanding blacks, peaking whites, and healthy depth. Black crush is held to only one shot, at least to the point of being a detriment. Shadows push deep into the frame, adding the mood of a dilapidated castle. Light becomes something of an experience as the monster gets a glimpse, and that moment works better under these restored conditions.

Management of grain sees no visible harm brought to the piece, well resolved by the AVC encode and kept in check. The film stock maintains a consistent structure, and the resolution benefits the imagery behind it. A number of scenes carry more definition than what was visible prior. Frankenstein and Elizabeth (Mae Clark) sitting outside near the final act is a stunning image, with trees and plants all striking. The elder Frankenstein’s address to the town’s citizens is generous too, all of those faces resolved cleanly even into the back of the crowd.

In close, there are source issues with focus that can never be resolved, although a handful are wonderful. The first moment as Karloff backs into the room and turns to the tune of three jump cuts is a marvel. Jack Pierce’s make-up and that creepy stare will never be topped, and it will take additional resolution to make it look any better.

Infamously, censors forced the scene of Maria’s death to be pulled, the little girl picked up and thrown into the water by the monster. Restored decades later, it is clearly an element not pulled from a source near the negative, fuzzy and indistinct as the scene plays out. Clean-up has been performed, although the skip into the stunning, far better print is forever obvious.

A constant, unmissable hiss accompanies the audio track to Frankenstein. The film opens on a nighttime grave robbery with general silence, that noiseless atmosphere crippled by age. The artifact of time never clears up, taken through dialogue scenes, the town celebration, and frantic finish.

As well as the video has seemed to age thanks to modern tech, the audio is not so sharp. Thunder is reduced to an unidentifiable screech with no definition to speak of. Music played during the party late is screechy and ill. All of the elements seem to crumple together, only at their peak when alone.

Dialogue carries a traditional, hollow quality that further loses firmness due to the castle interior. It drifts off and loses its punch, partially by design, and partially by age. This is adequate for its age, but hopefully more can be done to bring this one to life… pun intended.

Two commentaries vie for attention, one from historian Rudy Behlmer and the other via pop culture professor Sir Christopher Frayling. If you want, you can double either of those up with a pop-up trivia track.

The Frankenstein Files is a 44-minute feature that has been around since sometime in the late ’90s, a generous look at the historical significance of the creature. Karloff: The Gentle Monster is a pleasing 38-minute biography on the star and his horror career. Universal Horror takes a more expanded approach as it delves into all of the studio’s monster mashes for 90-minutes. Thumbs up to that one if you haven’t seen it before.

Archives is a video clip that pushes through posters and other related materials. Boo! A Short Film is a comedic look at Universal’s horror slate up to 1932. A promo for the Universal 100th Anniversary restorations and trailers round this one off.

Note: This review is based on the UK version of the disc. Contents (video, audio, extras) aside from the menus, are identical to the US release.