While Judge Dredd spouts off action movie one-liners, carries an astoundingly brutal weapon, and walks into danger unshaken, he is fallible. Most comic book heroes are brought to the screen as intellectual properties. No one likes a hero that runs away from danger, and they don’t buy associated merchandise.

Dredd is different. While his forcible march into a drug-riddled apartment complex is for the good of the citizens, his ways put innocent lives in danger. He also ducks, he runs, and avoids conflict, all while keeping a vicious frown over his only visible facial feature. Dredd is capable of maintaining his brutal, unflinching nature even when ducked behind walls. In super hero/comic book pathos, this is an outlier.

Maybe that’s why Dredd hit theaters like a bomb that never went off. People have adjusted to the glossy works of The Avengers. Those pulpy, often comedic looks in the veil of the comic culture are easy sells. Karl Urban, with his disgusted Dredd mug planted in close-up, is not.

This is a hard movie to like for a mass audience. The film is unflinchingly absurd with violence, people skinned alive and then dropped 50 stories. For the record, your skin may save some of your brain matter, because clearly, falling without it does not. In a culture turning its back on the gun violence while rising into debate, Dredd is the furthest thing from relevancy. That’s a shame, poor timing no fault of the created material.

There is nothing wrong with taking a stand, but to disparage crudely constructed visages of human limbs splattering as anything resembling reality is to miss the point. Dredd’s march into the Peachtrees apartment complex to take down a monstrous Lena Headey (known only as Ma-Ma; men so fear her they turn to children apparently) is overloaded with visual stimuli, both good and bad.

A drug appropriately known as slow-mo is working through the overcrowded, poor populace. It turns the mind to mush while slowing down time to the user. That lets the crew become overzealous with three dimensions, and as pretty as some of the slow motion can be (shots of splashing water are impossible to look away from), it becomes gimmickry that cheapens the film as a whole. Couple that with abrasive color and a dousing of noise, Dredd becomes downright unpleasant. In the end, it probably should be.

Unlike the ’90s adaptation that saw Sylvester Stallone comically romp through a colorful shell of the Dredd universe, this is a more contained. Mega City One, a nuclear wasteland where people try to get by, is explored via an opening, high energy chase sequence. Once into Peachtree, the film locks itself in, utilizing impenetrable blast doors to keep set costs down. Despite the obvious production hesitation, the tightness of the location works for Dredd, valuable in ensuring the action can stay heavy. Dredd himself doesn’t need to look far for his next victim.

Dredd carries some remarkably dumb material between the moments of high concept violence. Low on ammo, Dredd pushes on from a kill victim holding the same weapon, needlessly creating false tension for the following scene. No one walks into a film like this in expectations of intelligence, so Dredd doesn’t bother. The film turns its brain off so you can do the same to yours, all while watching artificial brains explode. 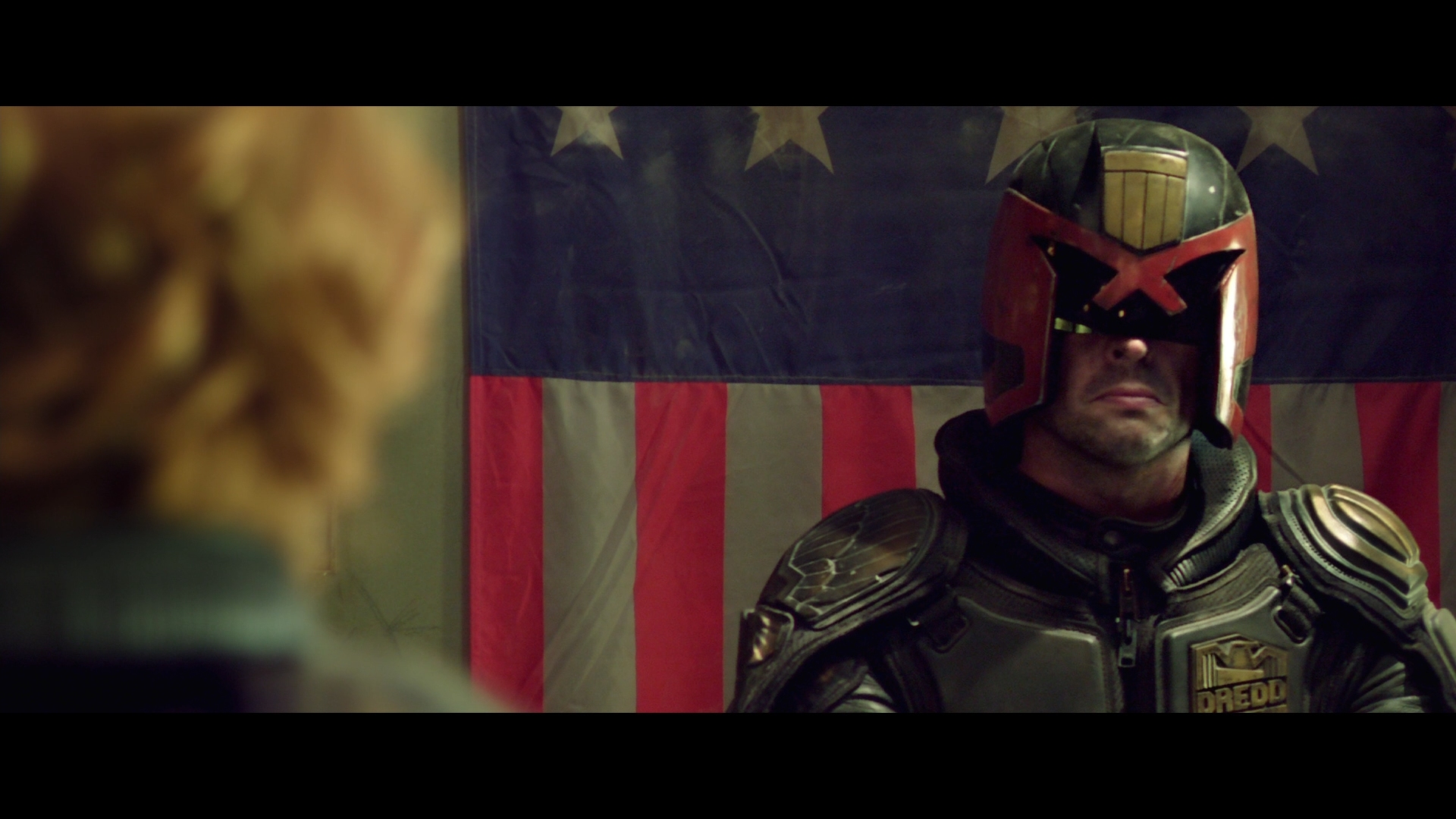 Dredd is ugly. Really, really ugly. Beginning with a garish combination of neon yellows, bright greens, and off blues, everything will clash into one other. There is no disconnection to the rundown look, with flesh tones taking on the tints of their surroundings. Black levels will fade into deep blues in a matter of seconds between edits, robbing the images of depth. Slow motion associated with the drugs will bring out a sparkling rainbow effect, a break from the eye-searing palette elsewhere.

Then, there is the noise. Noise on this level should be almost impossible. For Dredd, it undoubtedly has a purpose to grime up the visuals with coarseness and rough it up to match the lead character. That makes sense, although it often leads to banding – or is even forcefully removed through noise reduction methods – sapping the definition. Lionsgate can issue endless new encodes for this through the years, and it will never look anything like reality. At times, it’s more like security camera footage, but certainly the compression to Blu-ray is not helping. It’s one more layer to become caught up in the mess.

What of the high points? Dredd does pretty well. Stubble on Karl Urban’s chin is never missing, an element of the character that is arguably as important as the mask. Clean close-ups free of the harshness will display clear fine detail. A little light aliasing doesn’t dampen the highlights.

Dredd still has one more element raring to go, that being a brutal contrast that wipes faces and set design from the exterior sun prior to the lockdown. When that goes, it is revealed that the only hold on the depth was that blinding sunlight. This one flattens on the interior with the apartment lighting offering little to work with. Add that up with black levels pushed away from their prime by color timing which then makes noise visible, and Dredd is ready for disaster by design. The encode probably doesn’t help though.

Interestingly, the 3D presentation cleans up some – but hardly all – of the noise. Shots covered with it in 2D are cleared up for the glasses-on feature (shared on the same disc), making the situation with the standard version all the more confusing. However, with the exception of depth of field shots that lend total artificiality to the proceedings, Dredd is a remarkable feature to showcase the tech.

Mega City One is generous with its skyline from the outset, the aerials dizzying with their height. Shoot-outs, especially those with 3D-exploiting slow motion, are a sickening joy. Blood and bullets scatter into the frame, and debris passes by to complete the effect. The sheer amount of energy put forth to keep the depth is mesmerizing, and so willing is this disc to go the extra mile, you have to appreciate how blatant it is… without excuses for its excess.

Furious and angry, this DTS-HD 7.1 mix is a total winner from the outset. The opening chase ricochets gunfire from all angles sonically, selling the idea that the shooter cannot find a clean shot. Vehicles pass through and whip by as Dredd speeds up, amping up adrenaline. A techno soundtrack will find it heart in bass, thumping along and often heavier than the action itself.

There are some disappointments if you’re looking for a truly bombastic affair. A van flips and drops with hardly a thud. A trio of mounted chain guns will also fail to leave an LFE indent, although the destruction they cause is tremendously delivered through the positional channels. General gunfire will prop itself with a little punch, but probably less than some would expect a movie this outrageous to do. Still, the balance is there and the energy is fantastic.

Dredd’s mix has its share of subtle moments too. Hearing doors trap the leads on a specific floor, slamming shut all around them, is an awesome use of each channel. Specific shots fired in a non-action scene environment are processed into the rears via an echo that sells the space. Even if this mix is missing out on the low-end ever so slightly, there is enough here to have fun with.

Mega City Masters is the best of the bonuses, and also the first. It brings together Dredd’s original comic creators, tells the story of his creation, and legacy. It is quite informative. Day of Choas will breakdown the special effects, and they are certainly plentiful. Four promotional featurettes follow, all not worth the time even if they’re a few minutes each. A motion comic and trailers will bring this to a close.