Bobby, Bats, Brick, and Mouth are old. Get it? ‘Cause that’s the joke.

Headlined by Richard Dreyfuss who pulls double duty as a narrator, The Crew is a dreadfully clumsy mob flick that has nothing to go on beyond age. You could call it one note, but that’s giving it credit for a note in the first place.

Bobby (Dreyfuss) leads this awkward crew of four as they live out their final days in retirement from their “wiseguy” days, until the potential for a final hit reveals itself… 35-minutes into the movie. Their goal isn’t revenge, rather their homestead. It has become run down at the hands of a younger generation, and they want it to themselves.

Crew opens in the past, expository information detailing the younger days with seemingly redundant purpose. Their quirks – Mouth never speaks – are all revealed through narrative flow later. Seeing them in their prime establishes nothing other than draining the audience minutes in with obvious over dubs.

In the modern day, they concoct a plan to keep their venue afloat as the landlord jerks them around. Nabbing a body from the morgue, they set up a fake hit in the lobby. That body happens to be the father of a drug lord, and this sets off a series of contrivances, accidental deaths, and Dumb & Dumber level of mistakes that put this group on the hot seat.

Oh, and their old. They have to pee a lot, don’t enjoy slurpees, and they’re old. Is that redundant? Sorry, so is the movie. The Crew offers nothing to latch onto, devoid of likeable leads, any chemistry between the aging mobsters, and struggles with basic comedic timing. The zingers are well past their prime, much like the inadvertent hitmen themselves.

All of these dry shenanigans leads to a “that’s it?” type of climax, run down in a matter of seconds with little build-up. Director Michael Dinner has made a solid career out of TV direction, and that level of craftsmanship is all over The Crew. Abuse of wide angle close-ups, repetitious set-ups, rushed editing; all of those elements are run aground. This one had no chance. 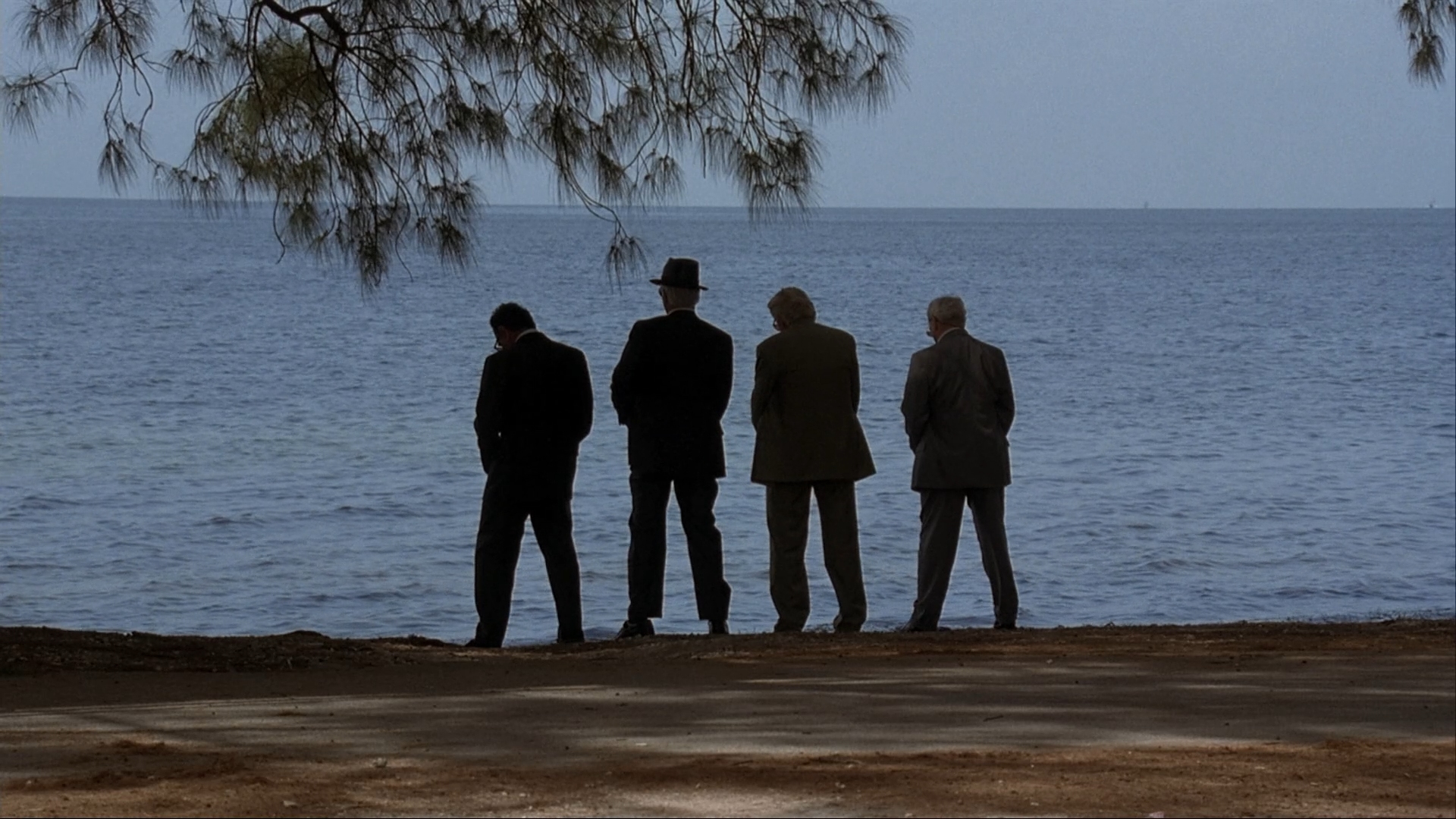 Mill Creek doubles up The Crew with mod parody Mafia!, and this is the worse of the two. It’s clear which received preferential master treatment. Who knows what hole the print for Crew was dug out of to carry this much dirt, but it wasn’t done recently. Released initially in 2000, it wouldn’t be a stretch to assume that year was the source of this master.

Noise reduction damages medium shots in unrecoverable ways, and adds a pasty feel to close-ups. Despite visible definition, the images never carry a natural look. Grain is mushy and clearly reduced to a minimum, leaving the encode free to handle less. If nothing else, this is a clean Mill Creek encode, even if it doesn’t have to do much by way of the master.

Need more? Well, edge enhancement is clearly visible against many edges, further enhancing the digital look. Some minor black crush is enough to be a bother, and colors have little to no impact. If saturation peaks, it does so in a way that feels out of place, certainly not representative of any natural 2000-era film. It’s more like a dated DVD master struggling to make hues pop. The latter line, aside from the color, nicely rounds out the concerns.

DTS-HD 2.0 is what you’ll get, and you’ll like it. At least, that’s what you can imagine the cast saying if you questioned them on the audio. While the stereo mix will widely space itself out (immediately in the case of rain in the introductory scene), nothing outstanding will be born from this effort. Dialogue is a little crusty in the fidelity department, and a single gun shot is nothing to be excited over. The ancient and Saturday morning cartoon-esque score is lacking some clarity, and classic Sinatra songs have little room to break out.

The mix is serviceable, certainly balanced if nothing else.

The disc finds room for a trailer, that’s it.