A surplus of kinky thrillers aimed at adults were produced by Hollywood in the wake of Basic Instinct’s box office success. Color Of Night was Bruce Willis’s 1994 entry into the category, featuring him as a troubled shrink that gets involved with a mysterious young woman while he attempts to solve the murder of his old college buddy.

The top-notch cast of veteran supporting actors makes the film more enjoyable than it should be, though the narrative relies heavily on misdirection and a huge twist near the end that some will find unbelievable. It’s trashy fun sandwiched around the film’s signature moment, an extended and explicit romp between Bruce Willis and his lovely co-star, Jane March.

Psychologist Dr. Bill Capa (Willis) moves out to Los Angeles after the failure of his marriage and the shocking suicide of a patient. There he stays with Dr. Bob Moore (Scott Bakula), an old friend that also happens to be a therapist. We soon learn that one of Dr. Moore’s patients from his weekly therapy group has been threatening his life. Capa is conveniently introduced to the therapy group, a small group of neurotics with severe disorders.

Color Of Night is most successful at establishing the individual personalities of the people within the therapy group, each capably acted by a veteran Hollywood actor. Leslie Ann Warren plays a nymphomaniac continually on the prowl for her next husband, while Lance Henriksen plays a man coping with the murder of his wife and child. There are others, but the gist is they all have severe mental problems and that anyone of them could be capable of murder.

The story pivots when Dr. Bob Moore is murdered in cold blood and the likeliest suspect is someone from his therapy group. Capa decides to accept the challenge of taking over the therapy group, all the while hoping that the murderer isn’t from the group. It’s at this point when Capa meets the mysterious Rose, a young ingénue played by Jane March. Their differences in age not withstanding, it’s a relationship built on instant sexual chemistry and Color Of Night freely uses it as the main selling point of the entire movie. Rose has a habit of cooking food in the nude and randomly showing up naked in Capa’s house. As their relationship develops, it becomes more and more apparent that she may be involved with the murder.

For those wondering which exact version of the film this Blu-ray contains, Mill Creek has only provided the R-rated director’s cut on this disc. It was previously released on DVD in the United States and contains 15 additional minutes of scenes to the theatrical version, though it is still slightly cut. An unrated director’s cut also exists featuring 74 extra seconds of even steamier footage, though it has never been released to home video in the United States. 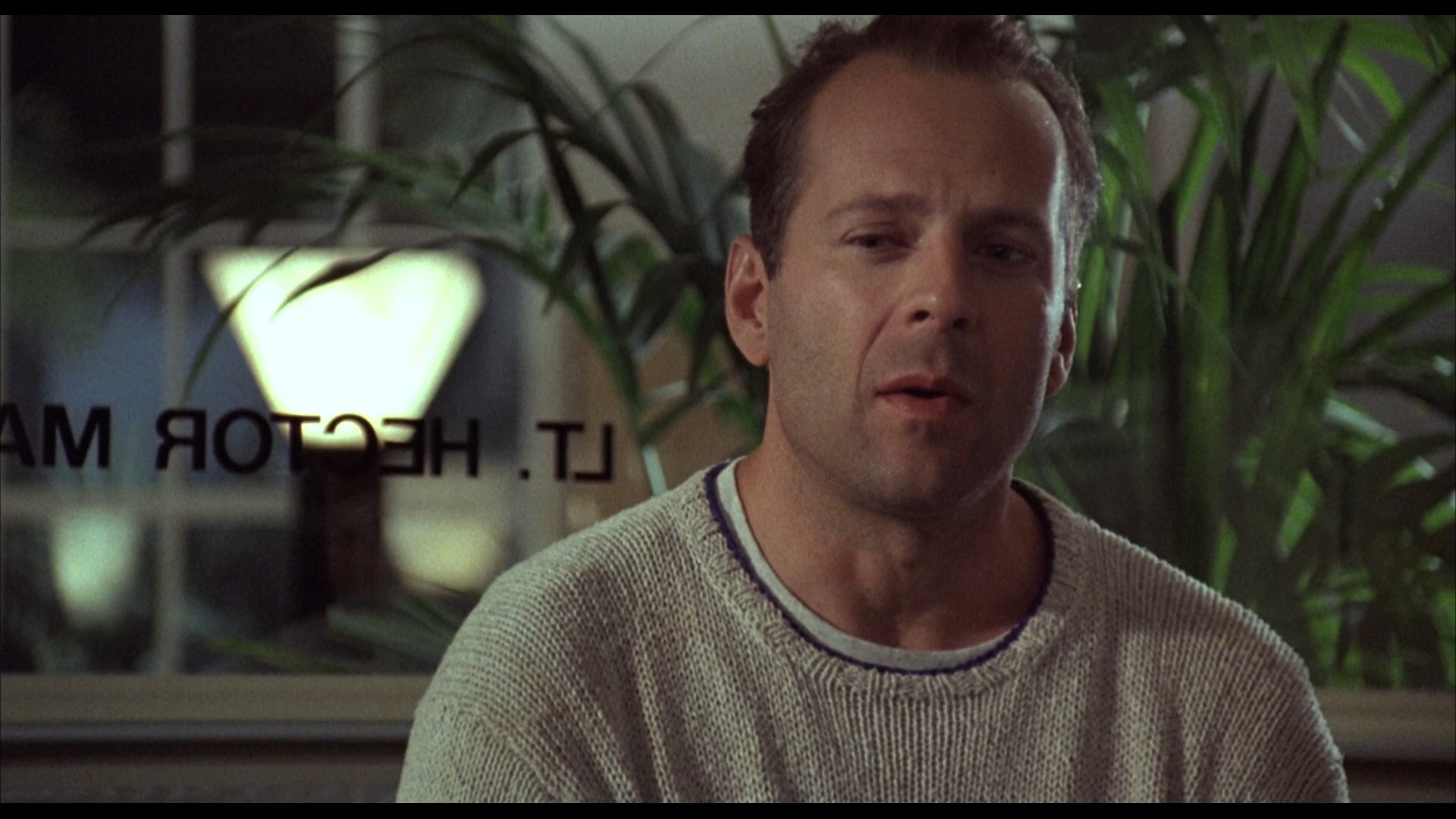 A big-budget Hollywood feature from 1994 should look much better in HD than what Mill Creek provides on this double-movie disc. The R-rated director’s cut runs 139 minutes and is presented in 1080P, at its intended aspect ratio of 1.85:1. Sharing a single BD-50 with Playing God, Color Of Night is heavily compressed using AVC in a mediocre video encode at sub-par bitrates that rarely exceed 17 Mbps. A layer of noise coats the grain structure of any interior shot and a number of scenes contain severe compression problems.

Clarity and detail show astonishingly slight increases in quality over an upscaled DVD. Buena Vista released it as a non-anamorphic DVD many years ago and that same master appears to have been utilized for this Blu-ray. It’s a dirty print with a number of splotches and speckled marks. The transfer shows all the hallmarks of an older telecine job made before the advent of modern HD film transfers, possibly from a low-quality IP source. From occasional lapses in the black levels to a washed-out color palette, it’s one of the worst transfers in HD from a recent Hollywood film.

Facial detail is largely absent and the image can only be characterized as exceedingly soft for interior scenes. This is not what the film should look like on Blu-ray and its cheap price is the only reason one would upgrade this movie, if they already owned one of the anamorphic DVD versions released in foreign territories.

Two soundtrack options are provided by Mill Creek for Color Of Night. The main offering is a DTS-HD MA 2.0 soundtrack that is quite dated in terms of effects and punch. Dialog is sufficiently clear enough, but don’t expect a lot of whiz-bang action to the tepid stereo mix. It’s the same mix that was offered on DVD and apparently this film never received a true surround mix on home video.

A secondary offering is a 2.0 Spanish DD soundtrack at 192 kbps. English subtitles for the deaf and hard-of-hearing are included.

The sole special feature is the movie’s original theatrical trailer at a length of 2:05 minutes, presented in SD.