Character development through time travel. You’re just asking for trouble. But, with the means to erase whatever Men in Black II became at your writing disposal, who wouldn’t jump at the opportunity?

No, Men in Black 3 doesn’t technically erase the now decade on sequel, or at least not as cleanly as neuralizer. It does scrape away some of the after taste, giving glimpses and piecing together a story that can bridge itself onto the grand original. It turns out a lot happened in 1969, both for a super young Agent J (Will Smith) and 20-something Agent K (Josh Brolin). As it turns out, Brolin is a master impersonator of Tommy Lee Jones. Who knew?

That does something, allowing Men in Black 3 to recapture the charms of buddy comedy although without the desperation of role switching. Will Smith is again allowed to be that smooth talking, fast acting, somewhat panicky lead role, although one with miles under his belt. Brolin (and to a lesser extent Jones in a role dangerously close to extended cameo) remains hardened, albeit with a smile in his younger days.

Absent is one Rip Torn, written out and tossed aside because contract negotiations said so. He was the backbone, leaving J and K more of a lonely duet. Emma Thompson feels more like a last minute replacement, sans gruff mannerisms, although coming from her that might be awkward. Come to think of it, how awesome would it be for the team to go back and make a daring rescue for Rip Torn?

Twas not to be, Men in Black 3 pairing itself down while simultaneously blowing itself up. The film is an implosion of time travel no-nos, and it’s not so much that they exist (find a film dealing with the topic where they don’t) so much as they feel so unnecessary in this universe. The elements revealed here can so easily be scripted in the modern day, and for a time, it seems like the film wants them to be. Modern day K is oppressively stuffy and stand-offish, a restaurant shoot-out more of an excuse for Jones to excel at stone faced mannerisms and Rick Baker to make stuff waiting to be shot.

That’s all deemed too simple, and that deserves a nod. Someone, somewhere doesn’t consider the summer movie audience to be as doltish as the medium has suggested. There’s room to be brainy, just not packed this tight. Gadgets overwhelm the piece, and there’s desperation to squeeze in familiar side characters. So much time is spent wallowing in exposition and explanation, the snappy one-liners are negated to a fraction of their expected potential. At some point, it stops being fun.

Therein lies the perils of time travel, utilized to craft a finale invoking needless American historical pride and a dual villain set up that, quit honestly, is needed only because he’s such a lumbering bugger anyway. Jermaine Clement is fine, but his “Boris the Animal” seems unworthy of security precautions put forth to stop him. He feels a tenth as dangerous as the cockroaches or a venomous Selena Boyle.

All of that exhaustion makes the enlightenment of character feel strained, as if it comes too late to salvage material that has already been waning in interest. The franchise is dripping, oozing, and spewing potential so it doesn’t need go away so much as it needs to step back and reevaluate focus. 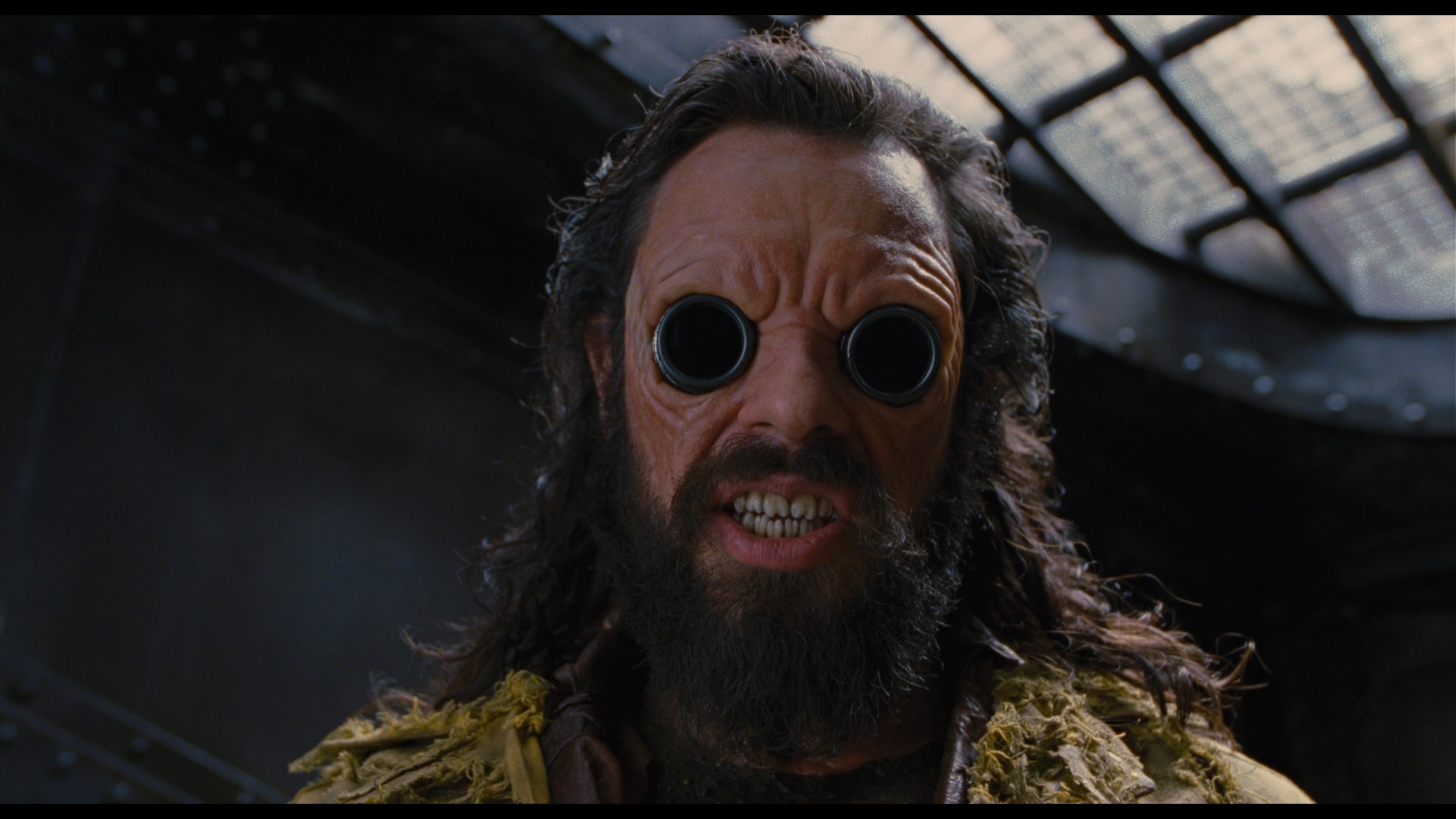 Despite the 3D push, MiB 3 was captured on film, and the sheer breadth of this presentation is startling. With only the slightest hint of grain to deal with, the encode is free to handle the fast moving action without worrying about much else. Definition soars. Close-ups are top tier, with precision resolution pushing through any slight focal issues to keep a stable image at play. Aliens look sticky, slimy, and gooey, while Boris appears to have his lenses punched into his face. You can see the impact zone and the make-up texture that goes along with it. That carries over into medium shots which are just as pleasant.

In comes color too, shocking to the system as J takes in the sights of the late ’60s. A carnival is remarkable for its production of primaries, carrying any and all shades. Despite locations prior that carry weight – the Chinese restaurant is fitted with intense golds and reds – black levels and nighttime scenery will force certain hues away. Brilliant contrast under the sun means the capability to bring out the potential.

Despite the saturation, no harm or foul is levied against the flesh tones. They remain natural and precise with enough kick to make them fit within this immensely colored world. It is in stark contrast with the rest of this series which tends to play itself down, more muted with splashes of brighter elements. MiB 3 is overloaded with intensity. Black levels of this caliber – reaching absolute black on a consistent basis without any loss – will only help.

It’s funny that about a week or so out from Expendables 2 comes this summer blazer. It does everything that Lionsgate doesn’t, pouring on the flash, the money, and the style. The gloss and sharpness scream Hollywood, impressing while ensuring this entry looks like what it cost. There are no direct shots that illicit groans for a die-hard Blu-ray audience. Discs like this solidify the purpose of the format…

… At least for 2D. The 3D edition of this effort is a bit on the lackluster side outside of its high points. Epic sequences such as the launch finale with a dizzying sense of height or the street chase have a lot of offer. Depth is substantial and even a little unnerving if you have a fear of high places. Time travel that occurs from tall buildings (which includes some mega-impressive cityscapes) creates the sought after layered effect. Action moments include Boris slinging his hand weapons toward the lens to great success.

The general material though is a little bit of a downer. Actors carry a flat cardboard look, merely extensions of the background with little sense of place. They pop out for the sake of it. Boris’ glasses are a bit of a haven for cross-talk too, and the general heaviness of the black levels means much of the 3D feels hidden. This one is a bit of a talker, so expect a lot of scenes to feature cardboard-esque actors standing in front of what feel like static backgrounds.

A resounding burst of LFE energy will spur this DTS-HD mix to life as Boris blasts a hole in his prison’s wall. It’s only going to become better from there. Little restraint is shown in terms of the low-end, balanced as well as could be expected and still hammering this mix at every turn. When a mega fish flattens Will Smith, you’ll believe it. Oh, and taking a trip to the Apollo moon landing rocket? You’ll be invested as it takes off. It feels as enormous as it looks.

This isn’t a mix to rest, kicking the surrounds into action with tremendous purpose. Neuralyzer’s pan back into the rears as they’re let loose, guns will jam into speakers as they fire, vehicles whip by during chases, steam escapes while characters crawl on tubing, and wind will drench key scenes in atmosphere. Enveloping seems like a meager term.

There are also those subtle moments, quiet and reserved that still echo out to involve the listener. As J is shoved into a ’60s era device midway through, the space fills with the voices, and as the machine ramps up, it spins. The circular effect (in addition to an electrical hum in the subwoofer) is superlative sound work. A party will pack up classic rock and send it into the modern day of audio clarity, all while bumping the low end for added effect. Majestic. Yeah, that works.

Partners in Time leads the bonuses, a fluffy making-of with little meat to it for almost a half hour. Evolution of Cool at least offers some decent insight into set design and how the ’60s era headquarters was crafted. Keeping it Surreal is all visual effects, all the time, including the extension of backgrounds you never knew were there.

Four “Scene Investigations,” otherwise known as breakdowns until marketing grabbed it, pass through four select sequences to show how they were completed. Progression reels (six of ’em) do much the same, but more directly. A gag reel has a laugh or two worth watching, while an entirely forgettable game and music video lock this disc to its bonus features fate.