In 1951, author Robert Heinlen came up with a novel called “The Puppet Masters.” In it, humans are overtaken by alien critters that attach to the body and control their movements. In 1956, Hollywood coined the term “Body Snatcher,” and the idea was implanted into popular culture.

Fast forward to 1994. Body Snatchers has been remade twice, the Cold War that fueled Heinlen’s paranoia driven novel had passed, and Donald Sutherland was in yet another one of these movies. Yes, Sutherland leads alongside a gaping mouthed Eric Thal, this despite Sutherland’s role in the 1978 adaptation. He must love these stories.

Not to be confused by the direct-to-video Puppetmaster series, this is a story centered on alien invasion in Iowa… because… well, the weather is nice?! Creatures that bare no legal resemblance to the Face Hugger of the Alien series are infecting the small town populace, and soon, most of the world. Threat squelching falls on one of those secret government agencies that was made to handle stuff like this. Politicians must have feared the political side of the original three Body Snatcher flicks.

For making first contact, everyone is awfully calm, comically so in the case of Sutherland. For the most part, he sits in a chair and offers static looks, or hilariously, pokes people with his cane as they attempt to overtake his vehicles. Thal plays Sam Nivens, the son of Sutherlan’s on-screen persona, and a rookie at this gig. He falls for the same “hide around corner” alien trickery twice within a 10-minute span. No one involved is particularly intelligent.

That’s what becomes so hard to swallow about Puppet Masters, the copious amounts of impossible stupidity on the part of its characters. Via means not shown on camera, people step inches from the lens or receive an edit, only to come back as an infected puppet. The film makes a deal over Sam’s potential alien lockdown, forcing him to take off his shirt. Minutes later, after rumbling with a co-worker who was somehow snagged, they completely ignore protocol because of a damaged vent.

Not only is this agency remarkably coy about this situation, the film pushes ahead with force. Viewers are rushed into the service of this alien breed, call signs evident on each victim until an end twist deconstructs all that came before. Shocks center more around the mess of decision making than any frightful thrills.

A strong three-way writing crew is attached to the piece officially (Ted Elliot, Terry Rossio, David S. Goyer) – all capable – but they’re not the only ones with a hand in it. Revisions were constant, and in the transition, all of the texture from Heinlen’s novel was lost. Some of it is to be expected, but there’s no driving subtext to fuel the gooey creature designs. It’s a dry, flat alien escapade with some sloppily constructed action sequences. 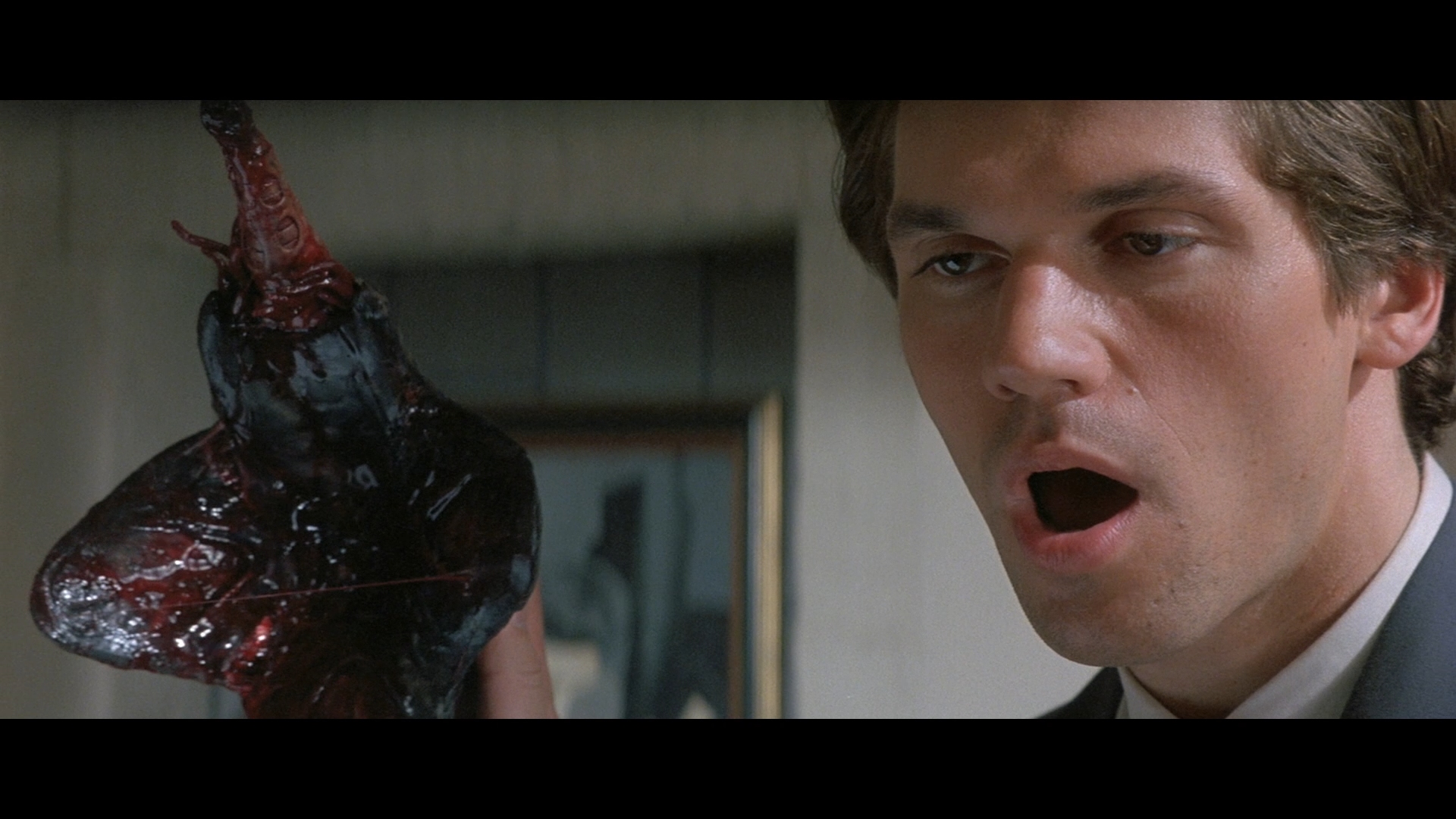 Mill Creek doubles up this ’90s sci-fi fare with best movie ever Deep Rising on a single disc. The results are… not bad actually. Between the two, Puppet Masters has fared better, with a modern source and limited damage. Clarity is high while compression is lessened to impact only on darker elements of the frame.

In close, tight cinematography captures sweaty faces, a key element. It’s important that’s maintained even at a distance; victims carry a higher internal temperature. Definition allows that plot device to show. There are no signs of grain reduction applied, the film holding to a clean facade and consistent film-like structure.

Early signs of edge enhancement are visible and quickly dissipated. Any sharpening has no detrimental impact on the rest of the image. Past the 10-minute mark, there are no signs of halos either. It comes across as more of a fluke.

Black levels have a general, pleasant depth to power through the night scenes and color carries a pale flatness. Flesh tones are positively dry. Greenery in the Iowa landscapes are muted, the highest saturation content coming from the gore effects. You can’t miss the intensity of the reds.

Paltry audio becomes the downer of the disc, although it’s not a quality issue, merely a format one. Ditching 5.1 for a DTS-HD stereo mix is weak, but the effect still works. The first frame has a kid panning the frame on his bike, the associated sound making the move left to right. This one will be spacious considering what it has to work with.

Fidelity is clean without any signs of age, and elements blend well. The score is booming when needed without any distortion. Without bass accompaniment, gunfire is bright on the high side, but that’s negligible.

No extras, because Deep Rising is the best extra you could ever ask for.